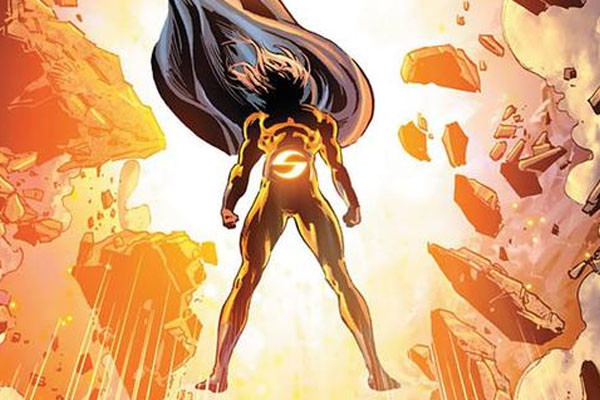 Happy summer, geeks and geekettes! The weather’s treating us well, and the creators are out producing some great (or, at the least, interesting) work. We’ve got some great writers giving us a sneak peek at some great titles, and we’re going to see what they think about the newest titles to lead us into the July Fourth festivities next week! Let’s jump right in, shall we…?

Teen Titans Special is an origin story for the new Teen Titans. It goes through three stories from the perspectives of Damien Wayne, Red Arrow and Kid Flash. These stories give insight to their reasoning to wanting to stray from the norm and separate themselves from the people they have spent their whole lives following. I think the story, written by Adam Glass (Deadpool, and Suicide Squad),  is very compelling and makes it easy to side with the kids on their choices to become their own beings. The art was, honestly, the standard that you would expect from a serious toned, DC action comic. Which is in no way a negative…there’s just nothing too special that sets it apart from other DC comics. The Blood and gore scenes were pretty cool though! Overall, I really liked Teen Titans Special and will be picking up the next one when it comes out! 4/5 Troubled Crime Fighting Children Agree.

I wasn’t sure what to expect going into issue #1 of the new ongoing Sentry title by Jeff Lemire and Kim Jacinto. I haven’t read much with/about the character, so there’s no fondness for him for me to have any excitement for this title. I am however; a big fan of Lemire and I am compelled to read all his works (I can barely keep up). If anyone can get me interested in a character that’s been around for years that I still know very little about, it’s Lemire.

This issue starts off dealing with duality. Not only the duality of Bob Reynolds and The Sentry, but mainly The Sentry and The Void, the darker destructive force of Sentry.  Then it goes on to play out like a more complex, existential episode of The Twilight Zone centered around keeping Bob’s past and present mind manageable: The Super versus Mundane. Lemire does his best work in this writing style and at times this issue felt like it could be an annex of his Black Hammer world. But still at times even Lemire couldn’t keep me focused on the story. 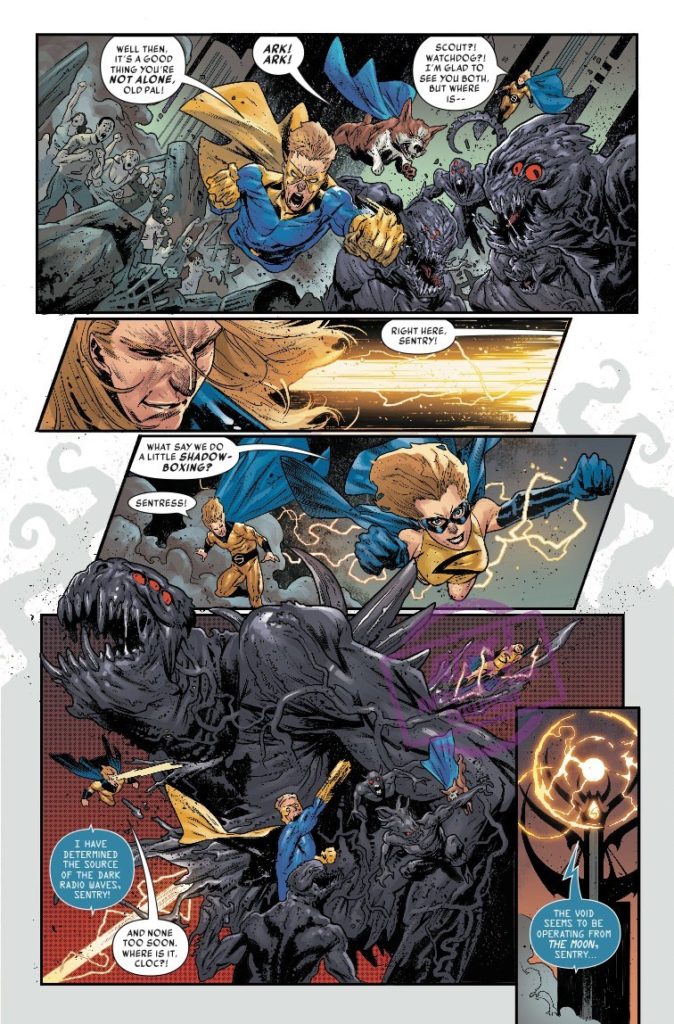 I think the artwork by Jacinto and colorist Rain Beredo stays strong throughout the issue. The juxtaposition of the styles, vibrancy and emotions shown between superhero Bob and dreary 9-5 Bob greatly assist the complexity of the story being told. I picked up this title for Lemire’s words, but this might be one of those moments where the character is a bit too underground for their own good. On the other hand, with a writer like Lemire doing a mini series, I’m of course curious to see what he plans to do with the rest of his superhero sci-fi story. 3.75/5 Golden Good Burgers.

Brian Hill has a monumental task ahead of him, following up James Tynion’s outstanding Detective Comics run.  Well, if this issue is any indication, the series is in great hands. There are two main stories going on: one is of a mysterious new killer in Gotham, one who thinks the Bat has gone soft.  The other thread follows Black Lightning, who is made an offer by Batman that he can’t refuse. Hill gets props for setting up a legitimately interesting murder mystery, playing to all of the strengths of a good Batman comic.  His Black Lightning feels like a mix of classic Jefferson Pierce, with a dash of the CW version, which is not a bad thing at all. The pacing and dialogue were both tight.

Mendonca and Egea’s line work was clean with the shadows never overwhelming any scene. Their work is reminiscent of Stephen Segovia, which means their backgrounds were just as strong as their character acting. Lucas’ colors really popped when they needed to (i.e. the Signal, and Black Lightning’s costumes).  This is an interesting set up and is obviously leading towards the relaunch of a certain special ops team that hasn’t graced the pages of a DC title in quite some time.  If Hill is the one to scribe their adventures, then I’m all on board. 4/5 Bibles.

Multiple Man. I had no idea who the holy fork this character was when I first started reading (truth be told, until I heard James Franco might be doing a solo movie with him, I’d never heard of him at all), but after reading Matthew Rosenberg (writer) and Andy MacDonald (artist), and the work they put in here, color me intrigued. Any story…or especially character…that messes with the seemingly insurmountable intangibility of time itself is right up my alley (one of the reasons Dr. Manhattan is one of my favorite fictional characters). Here, Jamie Madrox (or, at the least, one of his many sentient duplicates) finds himself alive in Xavier’s School for the Gifted, trying to figure out a way to keep from disintegrating into nothing; one of his duplicates has been alive and well, while Jamie Prime is apparently dead. Is this in fact the real Jamie Madrox? If not, can his duplicate find a way to remain alive? and what’s with the surprise cameos at the issue’s end?

Already I can tell that this title is going to deal with identity, and existentialism (at least it seems to be heading that direction), and any comic title that manages to balance character work with thematic explorations is worth following through. However, there isn’t anything TOO decisive to make this a MUST HAVE!, but this was enjoyable enough for what it is. It’s not reinventing the wheel, merely making you wonder how many wheels you actually have in-hand. 3.5/5 Pryde Burritos.