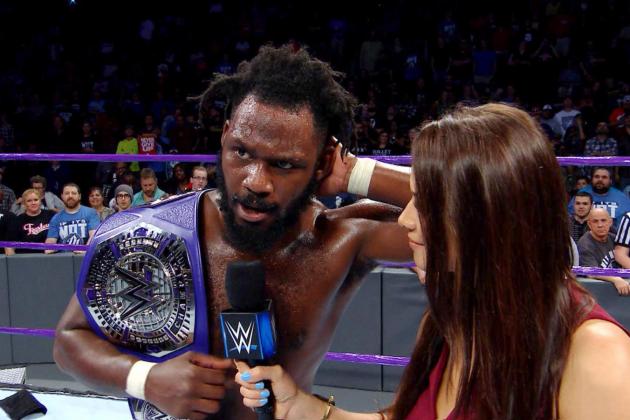 WWE’s 205 Live debuted last night with a bit of a stumble out of the gate. The show started by showing you a bunch of wrestlers that… apparently had the night off. Not even the former–recently former, mind you–Cruiserweight champ TJ Perkins could get a spot on this card. A competitor that did find his way into a match was “The Extraordinary Gentleman” Jack Gallagher — arguably the MVP of the night after displaying his amazingly entertaining technical prowess.

Introducing a bunch of people that weren’t wrestling was definitely a disappointing way to open the show, especially considering the biggest pop of the night went to one of those guys: the near-hometown favorite Cedric Alexander. Gallagher’s skills as a ring technician mixed with comedy that doesn’t feel forced (here’s looking at you, Ells-brose) made him the standout for me, too. I mean, the man tied Ariya Daivari into knots and called it a submission. It even left new/guest colorman Austin Aires a.k.a. “The Greatest Man Who Ever Lived” temporarily flustered. It was fan-bloody-tastic.

RYAN: Hell yeah. But as much as I like Tony Nese, I wasn’t into the opener. It wasn’t a bad match; the teams just didn’t click together for me. Good showing by the Bollywood Boyz — who will be on the main roster tag division sooner than later. Gulak also needs a spotlight badly; the guy is so much more talented than he is getting to show.

As for the main event, we saw “The” Brian Kendrick at his meanest yet, pulling out a lot of his tricks to try to tap out “The Outlandish” Rich Swann (hate that nickname, btw). Swann is pretty refreshing when talking about wanting to spread his love and joy. That.. he will now as our new Cruiserweight champion–a championship quickly becoming the “Boyhood Dream Title”. That being said, the show won’t feel so promo-bloated when we get a few weeks in and everyone knows who these guys are. After episode 1, this Apostle was left a little disappointed yet optimistic. 3/5 Bibles.

DESTINY: The matches tonight were solid, with the crowd far more invested than they are on RAW. As for the tag, the Boyz are brothers (and Gulak and Nese have tagged occasionally) so it didn’t have the “We signed these guys so we’ll throw ‘em together and hope you don’t take a bathroom break” feeling from RAW. Also agree that the main event was an excellent back-and-forth with Swann fighting Kendrick’s “Captain’s Hook” every step of the way. In the end, we have a new CW champ. Congratulations, Swann.

But one thing I’m not too crazy about is all the sob stories.

TJP being homeless and Rich Swann losing his both his parents as a teenager is one thing, but the Bollywood Boyz’s 95-year-old grandfather going blind? They’re reaching in these vignettes. And while the video packages are giving some semblance of character development, we don’t need to bawl our eyes out like we’re 12-year-old girls seeing Titanic for the first time to feel connected to these guys. Overall, I’m pretty hopeful about the division, if a little disappointed in this first episode. It wasn’t bad; I just expected more. 3.5/5 Bibles.