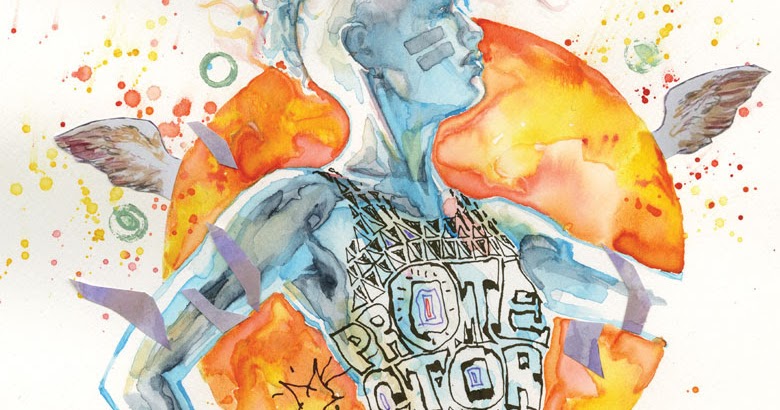 NERD – Imagine, if you will, a world not unlike that of yours or mine, yet completely different. It is a world in which all that is needed is grown — food, shelter and even technology — and that which cannot be grown is gathered by collecting inorganic debris falling from the sky. Rod Serling would have us believe this place could only exist in a dimension of sight and sound; a dimension of mind. Instead, the place is the Southern Hemisphere, location unknown. And the year is 4001 AD.

In the distant future, it appears the human race has not fallen to robotic overlords or even been colonized by giant space ants with British accents, but rather, life has…uh…found a way. A former bio-research facility turned living sanctuary called “the Grove” provides home and hearth for it’s people, self-sufficiently. Which means it’s definitely not in Los Angeles… Or Anaheim… Or anywhere in California for that matter.

In any case, the people of the Grove appear to come from two different classes/species. War Mother Ana, Queen of the Scavengers, is 23 pairs of good ol’ Human chromosomes as well as the only inhabitant allowed to leave city. Kinda like the “work-release” program of East Berlin. On the other side is the ruling class, made up of creatures whose species is yet to be revealed. My guess is the last Children of the Forest escaped Westeros, found the lost city of Thundara and then made weird little tree-cat babies to protect against the combined might of Mum-ra and the Night’s King. 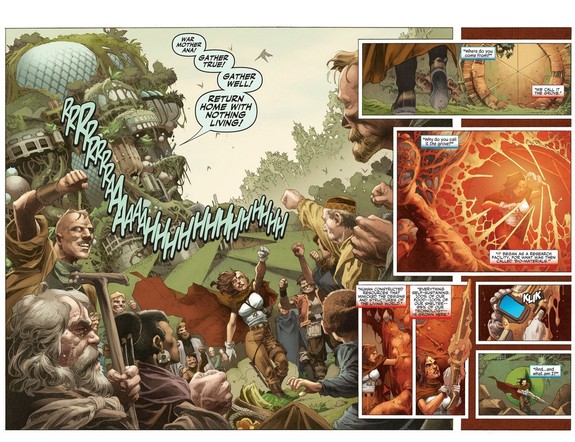 Nevertheless, when a huge chunk of metal comes crashing down to earth, the War Mother must set out to retrieve what she can from the wreckage. Ana, get your gun. Speaking of guns, hers has sentience, courtesy of Grove-constructed AI and the reincarnated essence of a certain Baltimore Ravens quarterback. This Flaco, however, has dead aim when he targets Trogs, War Rigs or whatever the thing is that looks like Zuul. When the pair reaches the debris field, Ana surmises the mess came from a city floating in orbit called “New Japan”, where children are created using only the best DNA from pre-selected mates and then raised by creepy androids that look like the fuck-spawn of Astro Boy and Hello Kitty. One of these little miracles apparently survived the crash to then be rescued by Ana and Red Rider Flaco. On the journey back to the Grove, the kid reveals he was created to rule — much like the son of Prince William and Princess Hottie — which seems to only be a point of confusion at this stage.

In terms of critique, your Righteous Reverend feels it necessary to start with the best– the art. Artist Thomas Giorello and colorist Brian Reber do a phenomenal job all the way around. From the texturing to the color palate to the kick-ass drawings, the pair creates a vibrant and dynamic world that is just plain fun to look at. The environment that is created is unique in that it has a familiarity despite being some place we have never seen before. Almost as if Naboo devolved into Dinotopia after Mad Max took office. There is also a distinct sense of motion and action-driven tension that flows from the drawings, telling the story as much as any dialogue, which is my next topic.

The writings of Fred Van Lente (Incredible Hercules) are complex, to say the least. I’m sure there’s a German word that sums up the ideas I’m about to try and explain. It should be said that this is a very high concept story and will assuredly be explained in detail over the coming issues. Nevertheless, Mr. Van Lente does service to the material by providing just enough information for the intent to be conveyed, yet omits an equal amount of detail to make the reader say “wait… what?” on multiple occasions. To put in different media terms, this would be the first 5-minutes of a decent sci-fi flick. Nothing that would star David Hasselhoff at least. The point being, there is far too much going on in this narrative to adequately judge the first issue as a stand-alone, though all the hallmarks of an epic series are present. Perhaps only time will tell. 3.75/5 Bibles.

GEEK – In the far flung distant future of the Valiant Universe – New Japan is a gigantic massive floating space station of a nation orbiting the Earth. The people of new Japan are protected by Rai who was created by Father. Father is the A.I. Program that launched Japan into orbit and saved them all from the apocalyptic events that scorched the planet below.

Well, that’s what Father told them. There is more to that story. 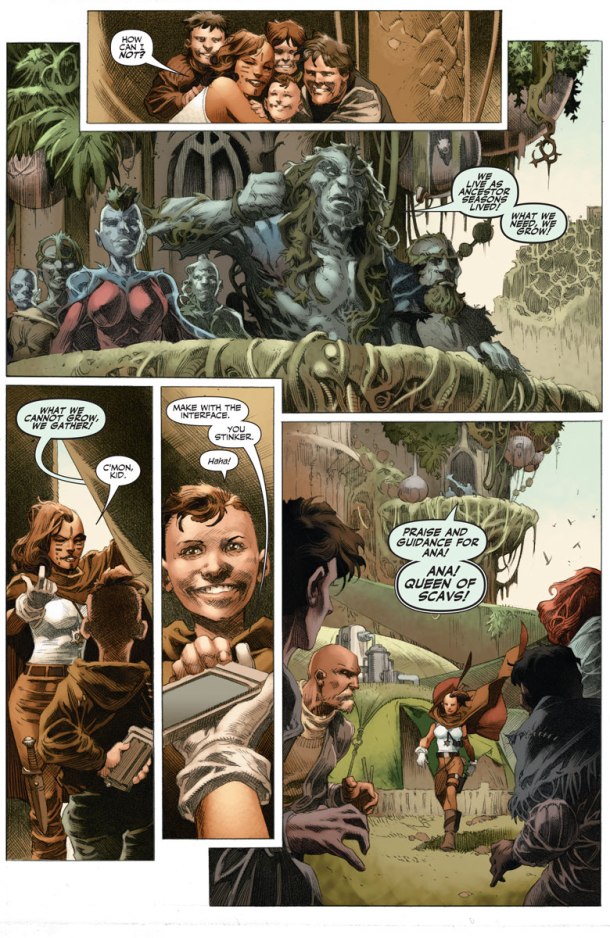 Things are not going well in New Japan (Pro Wrestling, either). Rai, along with the rebels of NJ, no longer want to live under the virtual thumb of Father. Things go south quick — with massive sectors falling to the supposedly uninhabited planet below. But it’s anything BUT uninhabited. This is where we meet Ana, the War Mother. She is the only person allowed to venture outside of the walls of The Grove. The grove provides almost all they need to live. Food, shelter, clean water, technology. But there still things needed that they don’t have access too. Previous metals, plastic, circuitry. Ana’s job is to go out into the wasteland and gather these keep her and her people alive. Armed with a sentient-talking rifle we follow Ana as she heads towards these new fallen sectors of New Japan. Plenty of inorganics to be mined and salvaged, if she gets to them first that is! What she finds, and what she brings back may change the very landscape of the Grove for Better or worse!

Even if you’ve never read a single Valiant Comic before, you can come in here and not be lost– something rarely done with other crossovers from other companies. Van Lente (Archer & Armstrong) pulls this off with a deft touch that is unheard of at other companies. Beautiful artwork from Giorello (Conan) and Reber (as usual), without a single panel wasted. Valiant is a company that is FILLED with hidden gems hiding in plain sight. War Mother is a very bright gem that fans of science fiction, post catastrophic / apocalyptic survivor action adventure are sure to enjoy. 4.75/5 Bibles.

Appropriate that we get the rebirth of the Suicide Squad to coincide with the DC comic book film within the same week. But just like the film is getting mixed reviews, does DC’s Rebirth of its most dangerous team knock it out of the park?

Written by Rob Williams (The Royals) and penciled by Philip Tan (Uncanny X-Men), give the book a distinctive look and feel. After the reboots and identity crises that the Squad was taking in the New 52, this is a meaner and leaner book. Williams’ fleshes out the characters from Deadshot being the cold, calculating, marksman; Boomerang the Aussie with a devil-may-care attitude; and Harley Quinn’s zaniness and, dare I say it, insanity.

Tan’s pencil work is all grit, from the darkest prison cells to a Mongolian metropolitan battle. While his style is a match for the book, the art does take a bit of a dive due to the fact that there are three inkers, all of whom are great by themselves; but it becomes a case of too many cooks in the kitchen that takes away from the some of the panels. 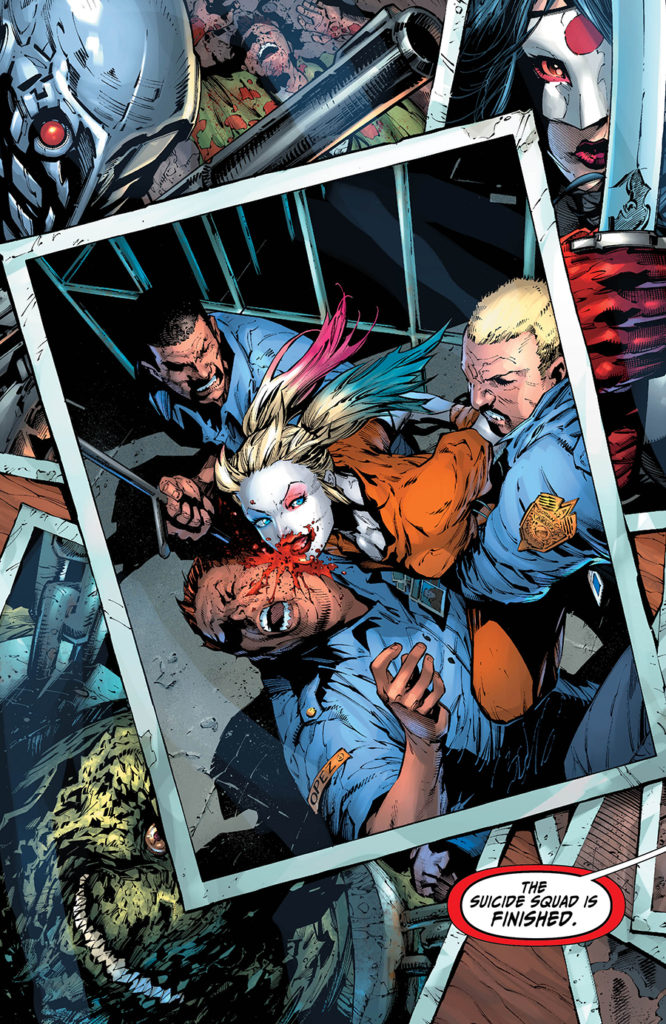 We begin with Amanda “The Wall” Waller; back to her pre-New 52 form, getting berated by the POTUS, a cameo by Obama, for utilizing the Suicide Squad without his knowledge. It’s when she infers that America needs them now more than ever to do the jobs that Superman, Wonder Woman and Batman cannot do. Williams splits the book between Waller having a conversation with a new task member and the Squad in the thick of it. Sticking to the film, the book showcases Deadshot, Harley, Boomerang, Waller and a figure from the Squad’s past. Each get their moment to shine whether it’s Boomerang talking out of his ass or Harley shooting a big freaking gun there’s not a dull moment to be had. One thing is clear; they’re here to do the dirty work without the morals that weigh down our bright and shiny heroes– and they are willing to do anything to finish the mission. 3/5 Shell Casings