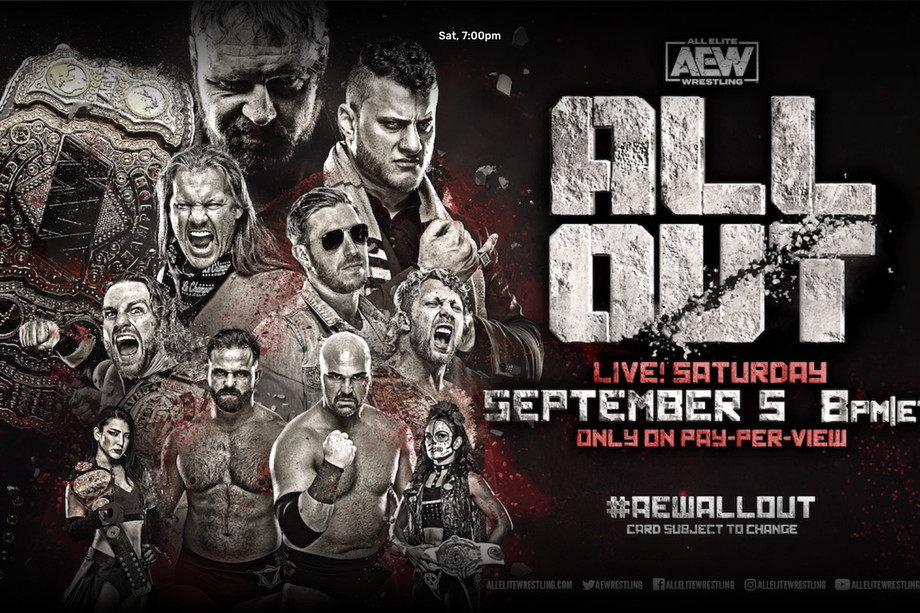 To think All In was only 2-years ago. Oh, hell, a lot has happened since and that’s only talking professional wrestling. Enter All Elite Wrestling’s second edition of All Out, which sadly did not take place in Chicago as planned, of course, but rather at the fed’s literal new (and hopefully temporary) home field in Jacksonville, FL. It’s been a while since I reviewed a wrasslin’ event for GodHatesGeeks and there’s a lot to cover from tonight, so here goes! 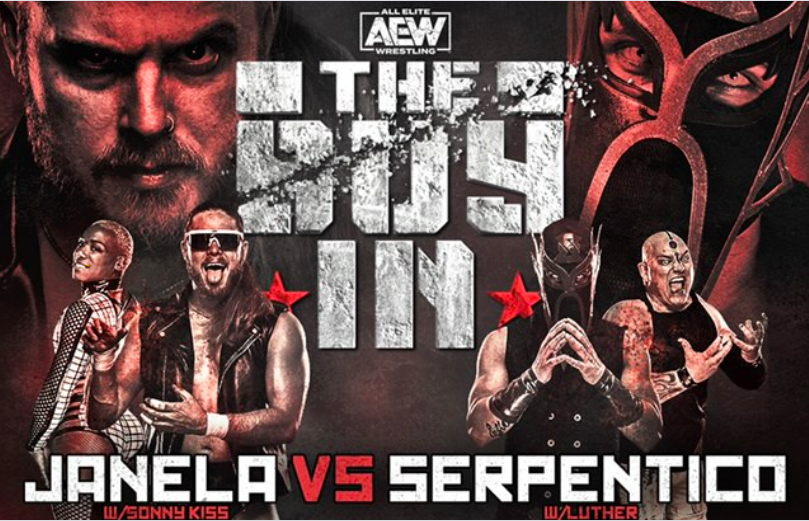 So, you’re telling me Joey Janela went from having Penelope Ford in his corner to this year having.. Sonny Kiss. 2020, y’all. (Hey, no judgment here.) This “Buy In” opener was just a warm-up, something to keep Janela somewhat strong and on the card until they figure something else bigger for him. Serpentico and Luther are a strange pairing.. but we’ve doubted AEW before. Alright match and The Bad Boy wins via Macho King-styled top rope elbow. – 2.25-2.5/5 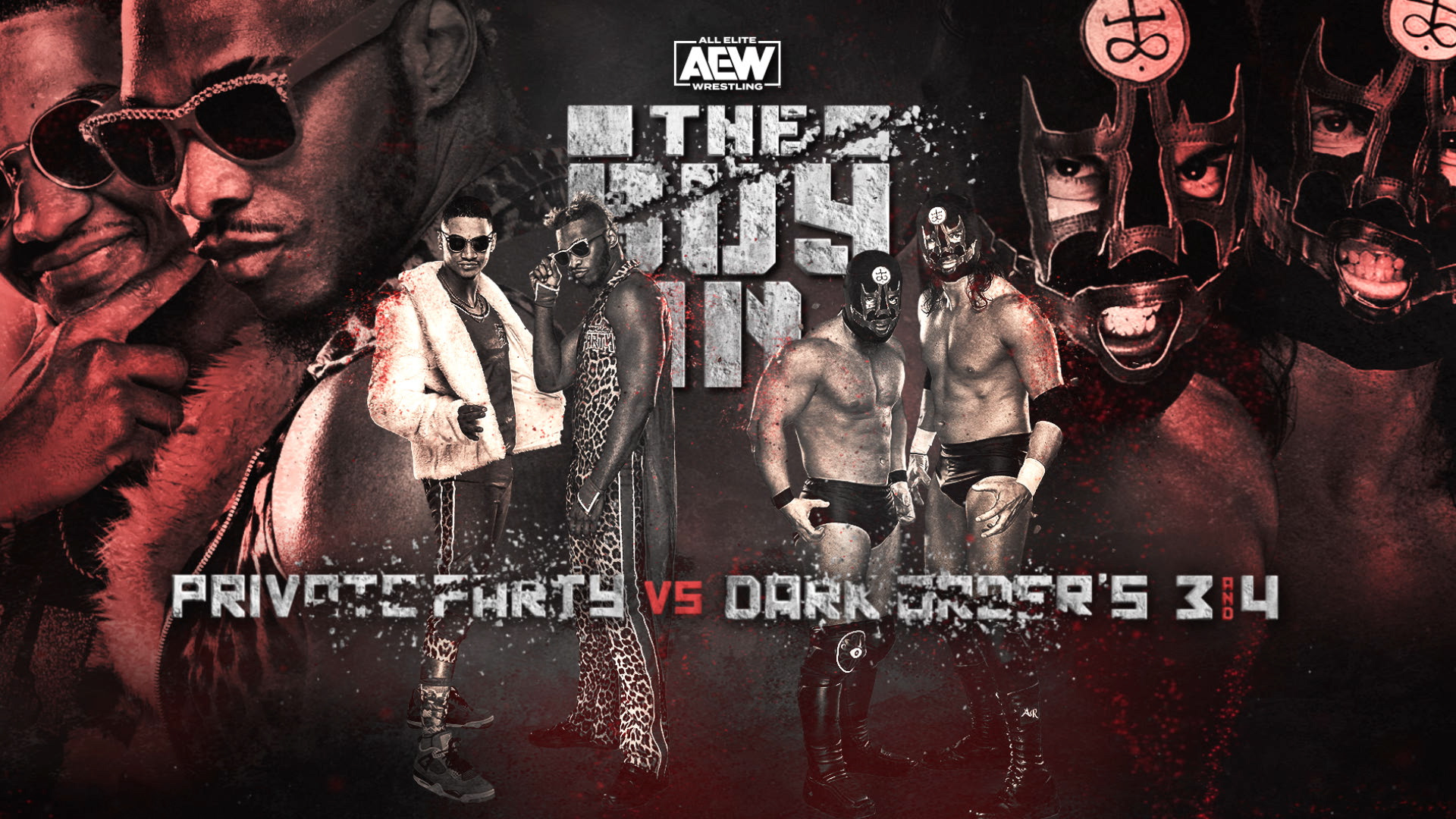 Pretty much what you want out of a pre-show match: a mostly sprint — minus the first few stumbling minutes — with four hardworking guys and a number of high spots to get fans excited for what’s to arrive the rest of the night. Private Party served this role well and got the win over 3&4 with a dope ass Gin & Juice sequence. – 2.75-3/5 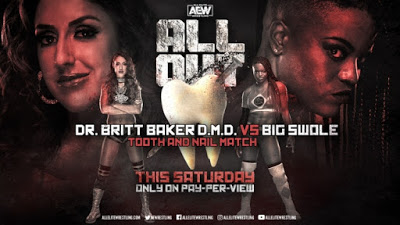 Two things Dr. Britt and Big Swole did well: 1.) Kept this pre-taped thing short at just over 6-minutes, 2.) Kept the dental office shenanigans minimal. Was it cheesy? Oh yeah. Was it Attitude Era-styled trash? Surely. But, was it fun and different than anything else on the show? You betcha.

The right girl definitely won, and Swole deserved that shine on her way to Shida after this. She’s really come into her own as a personality, and it appears she can be one of the brand’s best talkers. Speaking of which, the returning Excalibur was mostly excellent last night and might’ve had the line of the night with “Dirty Dancing through the diploma!” – 2.5/5 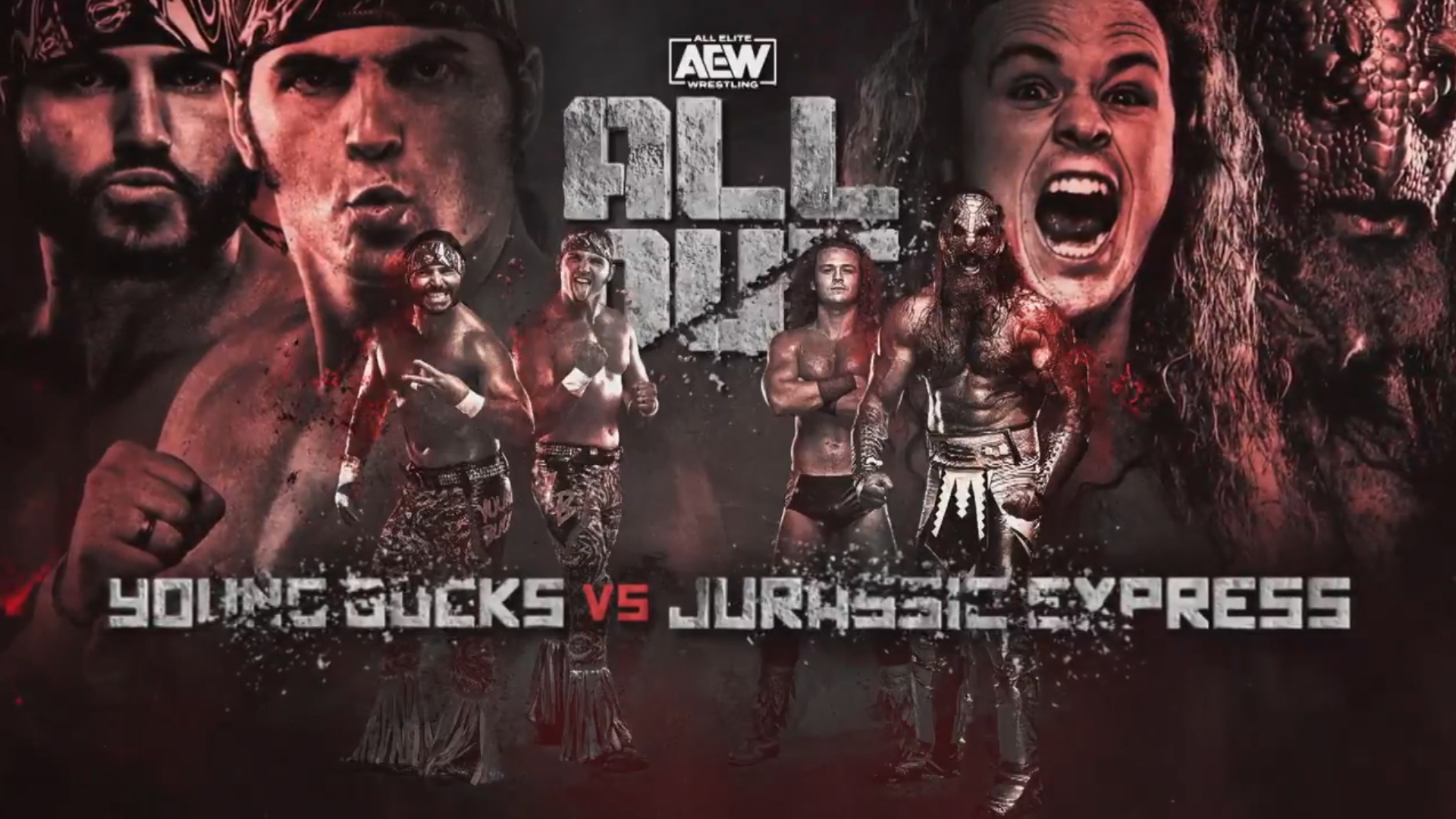 Young Bucks play “heel” here as they usually do against another babyface team. Matt was extra nasty, especially in his destroying of Marko Stunt (which isn’t really a heel move when there is a bare audience seated very far from ringside!). There were so many great spots in the match, and seeing the giant Luchasaurus take a Destroyer from Nick was just one of them. Jungle Boy was so good, and it was impressive how smooth everything went with all the innovation these two teams went on to muster. – 4/5 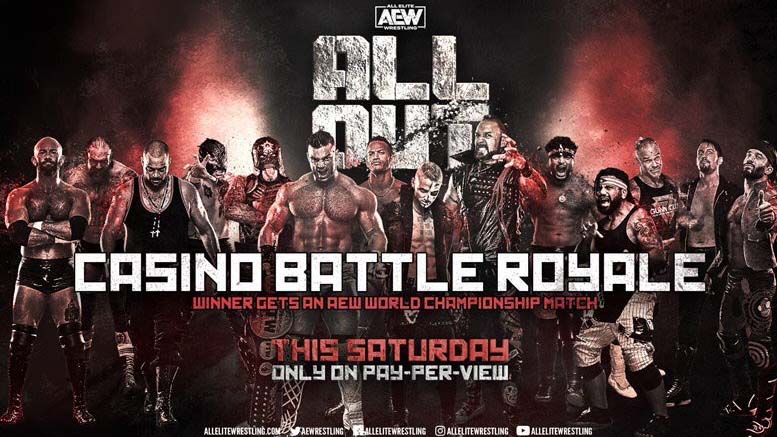 As far as battle royale’s go, this was excellent. The third ever Casino Battle Royale had a lotta talent in there that actually made sense, and not just there to fill up space — even Will Hobbs inclusion was a great call, he def got the rub here! — lots of rivalries continued (Allin vs. Starks, LAX vs. BF), and a we even got a few dream match-ups in between (Cage vs. Archer). I feel really bad for Matt Sydal‘s debut in AEW that came with a “SPLAT!” following a slip on the ropes during a Shooting Star Press attempt. The highlight: Cage tossed a body bagged Dary (filled with thumbtacks!) over the top and onto the ramp. Oh, and Cage press-slammed Hobbs, too, while manager/wrestler aka shit-talker/brawler Eddie Kingston made it to the final few. – 3.25/5 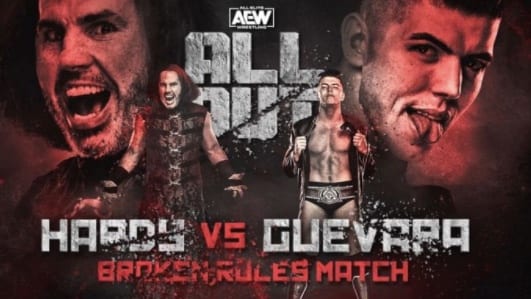 If you already haven’t heard this match should’ve been stopped when Matt Hardy suffered what looked to be a horrible injury from a spear off a scissor lift. Referee Aubrey Edwards did hold up the X, but the doctor allowed the match after a break. “When the doctor checked on [Matt], he then passed him and cleared [Hardy] in the concussion protocol,” Tony Khan said. “He checked with Matt, then Matt came back and he passed the concussion protocol and he’s doing OK. I spoke with him right after the match and again just now. He went in precaution to the hospital.”

Regardless, this “match” was some early-2000s WWE level bad, injury or not. Matt gets props for being a tough guy and wanting to finish the story, and Guevara is a no doubt big time talent prospect, incredible at selling, and his courage is admirable. This just.. shouldn’t have been a thing following Matt’s early bump. – 1.5/5 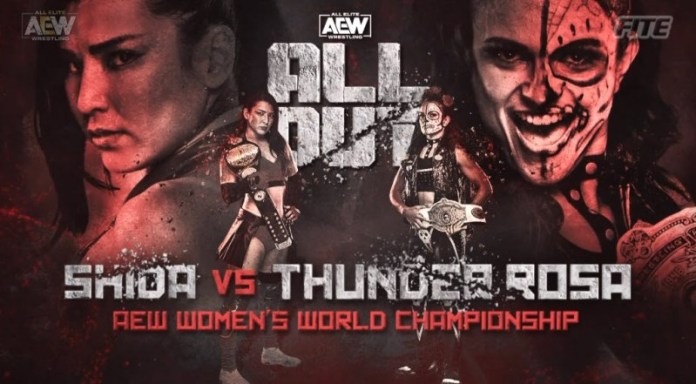 This was a hell of a woman’s title match. NWA Women’s Champ Thunder Rosa definitely won some new fans after this. Her balanced style was mightily impressive, showcasing a touch of Lucha, unique strikes and solid power. Her and Shida worked well together. It may have went a few minutes too long, but — you know what — I give AEW (Kenny Omega, who likely agented this) a lot of credit for letting them get all their shit in and really work like this was a main event.

Also credit to AEW for match placement; unlike many NXT TakeOvers, a lot of women’s titles bouts sorta got drowned out after many tremendous tag title matches, sitting right in front of the men’s main event– so I loved that these gals went so early. Shida with the running knee victory, but she had to battle through arguably her toughest test yet. I loved it. – 3.75/5 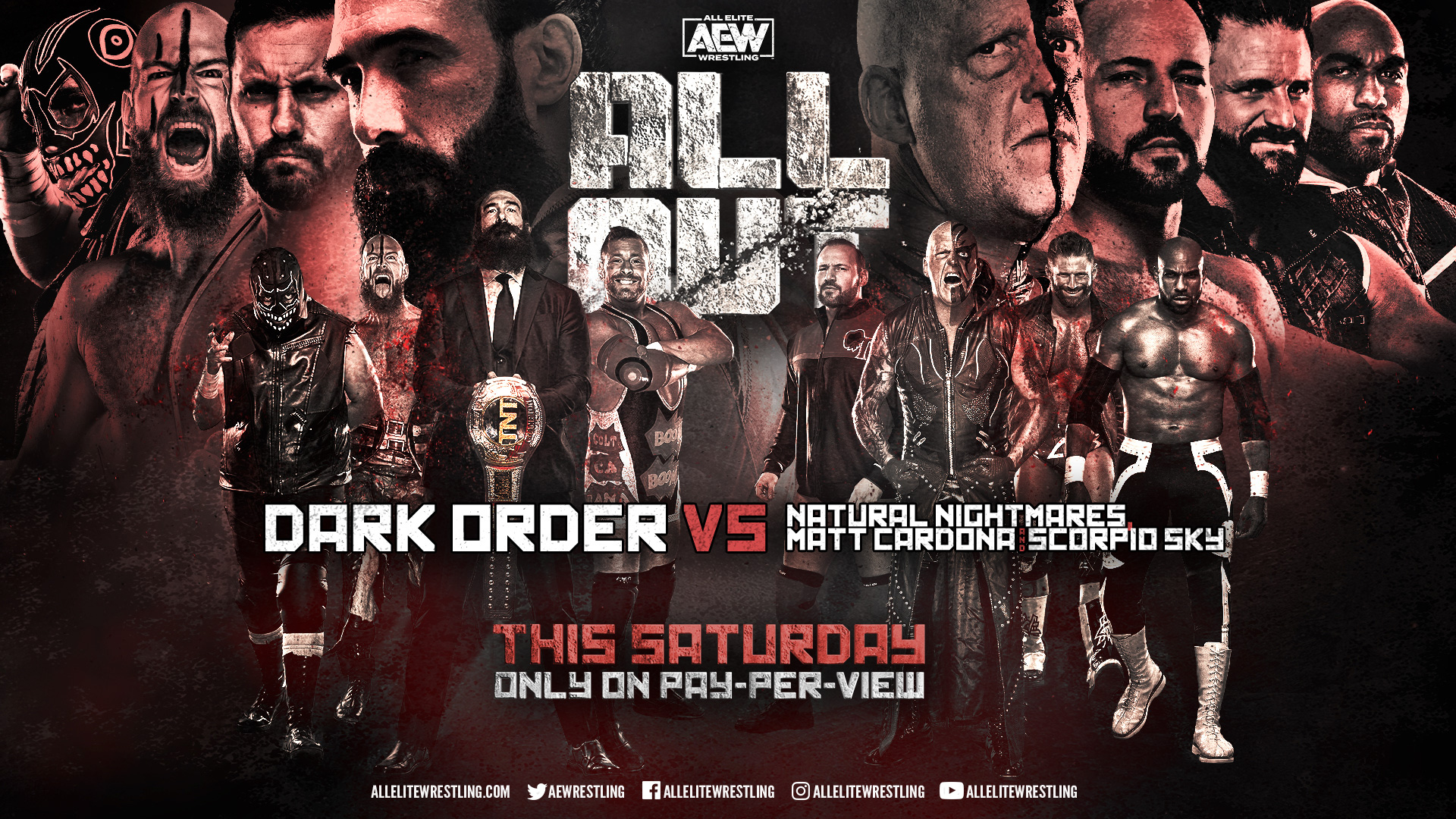 This 8-man told a perfect story by the end, and had a lot of fun moments. This was definitely the most we’ve seen in AEW from Woo-woo-woo, you know who. Cardona def had a lot of energy, and if his obvious “WWE style” doesn’t bother you, he can be pretty fun to watch. Everyone else in the match was damn good and worked hard. Mr. Brodie is becoming an ultimate antagonist. Goldust vs. Luke Harper should be great on Wednesday! *insert cry laugh emoji* – 3.5/5 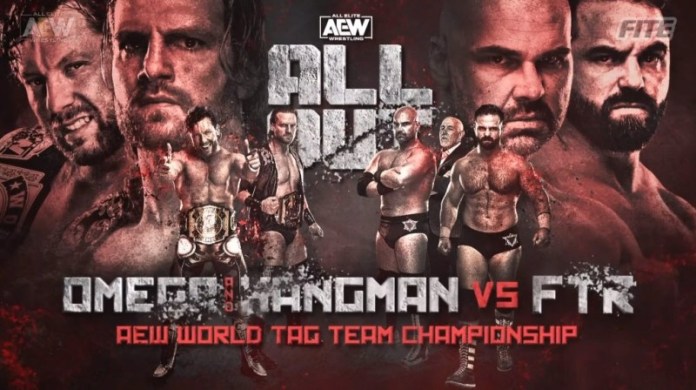 Soooo… that was one of the most lopsided tag team title wins against a powerful champion in recent memory. I’m not talking squash, but more so 30-minutes of classic tag team domination. FTR were flat-out amazing, if you love traditional tag team wrestling. OK, so, yeah, here is yet another former WWE talent getting the gold in AEW. I say.. “so what!” As long as they are booked strong (I mean, has “The Revival” looked this good on the main roster? Definitely not), I don’t care if they win the championships. We know AE-Dub has plenty of young, impressive in-house talents that aren’t too far away from taking to the top.

As far as the match, I can’t remember the last time Kenny took this much heat– not even against Cody in ROH or Jay White in New Japan. Omega got his ass kicked all over the place, and it all made sense. FTR found a way to cut him off, cut off the momentum, cut off tags, work both guys towards their corner, grounding either one and then cutting them off some more. There were so many mistimed, miscalculated efforts by the Champs in the match when you just figured either Hangman or Kenny would raise a stink and take off. FTR also worked Kenny into a pair classic Steinerizer leaping bulldogs, which led to a pair of spike DDT’s on Hangman for the finish. New champs and the Elite story… shall continue. – 4-4.25/5 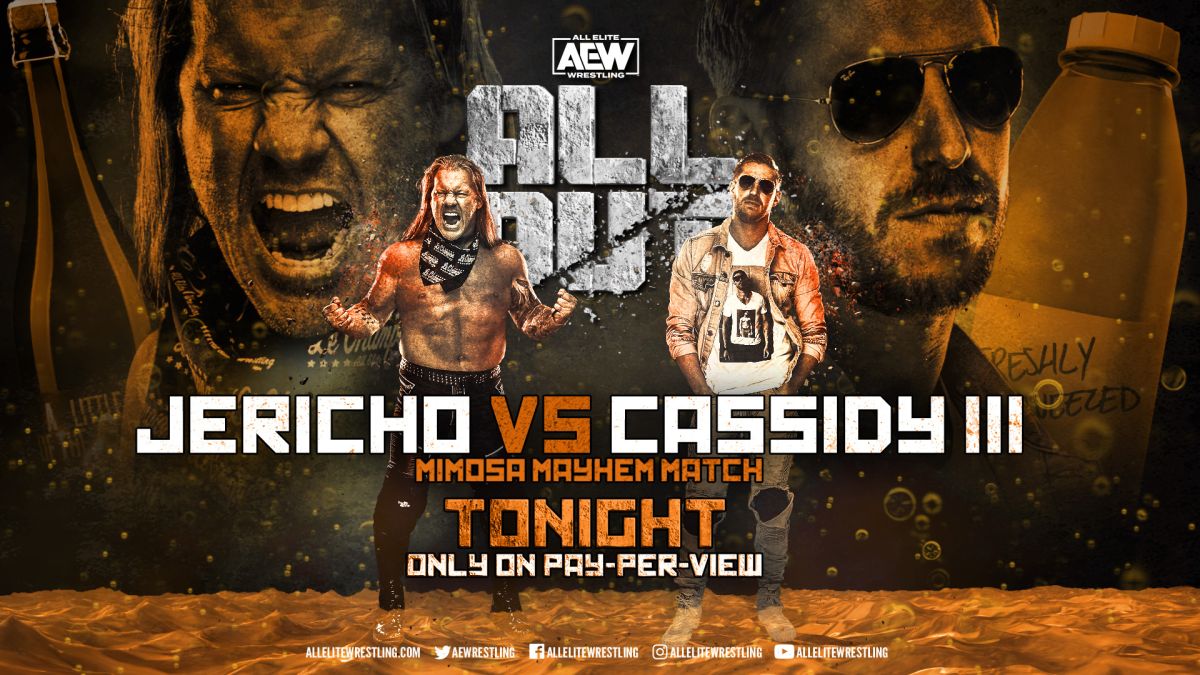 How to open up a big match: hit one of your finishers right off the bell! It happens in UFC; hell, it happens in WWE. I loved getting the false finish right off the rip following Jericho‘s Codebreaker, and it def created more buzz and raised the stakes. While the large orange pools just outside the ropes could be distracting, Y2J & Cassidy did a tremendous job at wrestling, brawling, teasing big spots, and leaking some big spots around all the juice.

The Mimosa Mayhem got real fun with another Codebreaker, The Walls, Tornado DDT, Flying Hurricarana, and almost a top rope Razor’s Edge into the drink. A pair of Super Orange Man Punches leads Le Champion into a very splashy Saturday. Fun, fun match that bordered on ridiculous but stayed within the realms of a big final fight. – 3.75/5 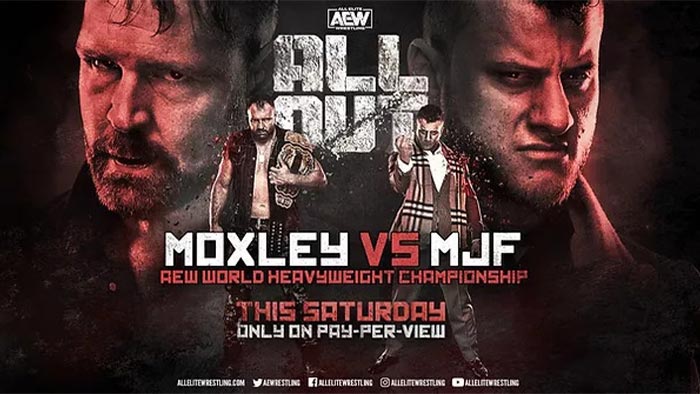 This definitely lived up to the hype. It reminded me a lot of Flair/Sting but way better. Hear me out: MJF is nowhere near the galaxy of in-ring that Natch is, but! He definitely knows how to target limbs, out-wrestle his opponent yet still find enough shortcuts to remain the “dirtiest player in the game”. Oh, and Maxwell took a pair of blade jobs too. Mox hit more impactful moves much like The Stinger, relying more on car-crash strength and persistent brawling, along with nifty ways to get MJF outside the ring. The Champ’s selling was also great.

One of the hardest things to do in wrestling is have the perfect ending and they accomplished that here, as well, with a Paradigm Shift following Wardlow’s Dynamite Diamond ring toss into the squared circle that distracted.. his own man. Tremendous booking. Mox has always found a way to capitalize on any situation–babyface or not–so I’m not mad with that either. – 4.25/5

AEW All Out 2020 was definitely a solid PPV, and even stronger if you don’t count The Buy In. Even with the pre-show there were many highs (tag matches, world title matches) and lows (Tooth & Nail, Broken matches) and some would argue that some of the matches went on too long (FTR’s 30-minute beatdown, Shida & Thunder Rosa). I didn’t mind the longer matches despite the lack of crowd noise (they clearly need to be mic’d better since the real fans are seated so far away from ringside; the heat and humidity definitely got to the wrestlers standing at ringside, as well). But as much as I loved seeing the work in those two epics, I definitely understand the lack of attention from home audiences with the lack of crowd heat. It is what it is. Crowds being “dead” can’t really be a factor in matches when there really is no crowd to begin with. That all said, I had a fun time watching this and I can’t wait until Wednesday to see what happens next.