Over the next couple of weeks, your favorite Ringside Apostles will be covering both AEW and NXT TV specials. It’s The Great American Bash vs. Fyter Fest, and we’ve got the match reviews and bible scores! This is the closest we’re gonna get to a 4th of July party, so let’s rock this hump day over the next few, Hump-Tays.

It’s time for Bash at the.. ahem.. Fyter Fest 2, Night One. Looks like Bash at the.. yanno what, nevermind. It’s Canada Day so of course let’s start things off with Your Canadian Hero, “Le Champion” Chris Jericho joining the 3-man booth of Excalibur, Good Ol’ JR and Tony Skeevone! And kicking off Night One we have.. 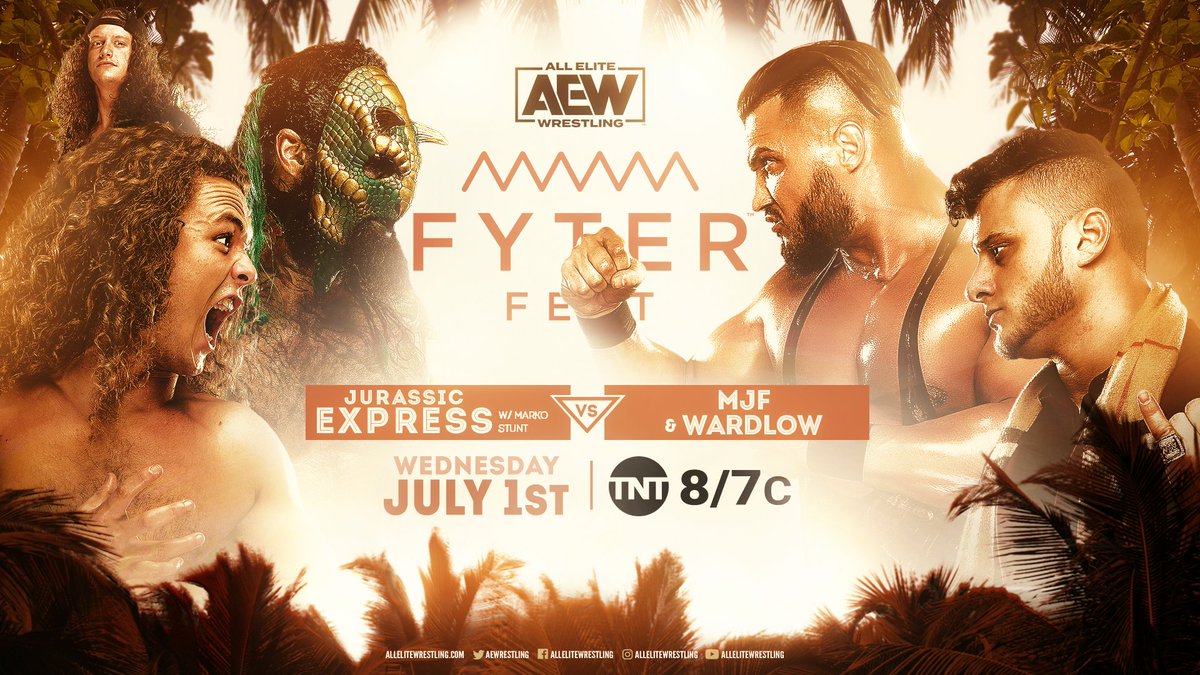 MJF & Wardlow vs Jurassic Express: You sure this program isn’t being run backwards? Let’s have the tag match be the blow off and not the two big men in last week’s Lumberjack match. H’okay. As usual MJF proves why he’s the true gem of the AEW roster as one of the best heels working inside the squared circle today. He’s got a mouth on him like Roddy Piper and works like a modern day Ric Flair in the making… Jungle Boy & Luchasarus at this point are a well oiled machine. Wardlow is still finding his way here and due to his overzealous nature and a wayward KO blow by the Dynamite Diamond Ring– and just like that this program is over as Jurassic Express gets a clean win over these dastardly heels. – 2.5/5

Oh good news! To keep eyes on this show next week we have the first ever AEW Puppy Bowl. That is not a typo. What’s this?! Joey Janella & Sunny Kiss getting worked over by the “Murderhawk” Lance Archer?! Any time Joey’s getting his butt whipped on my TV, it’s a good time. Now onto… 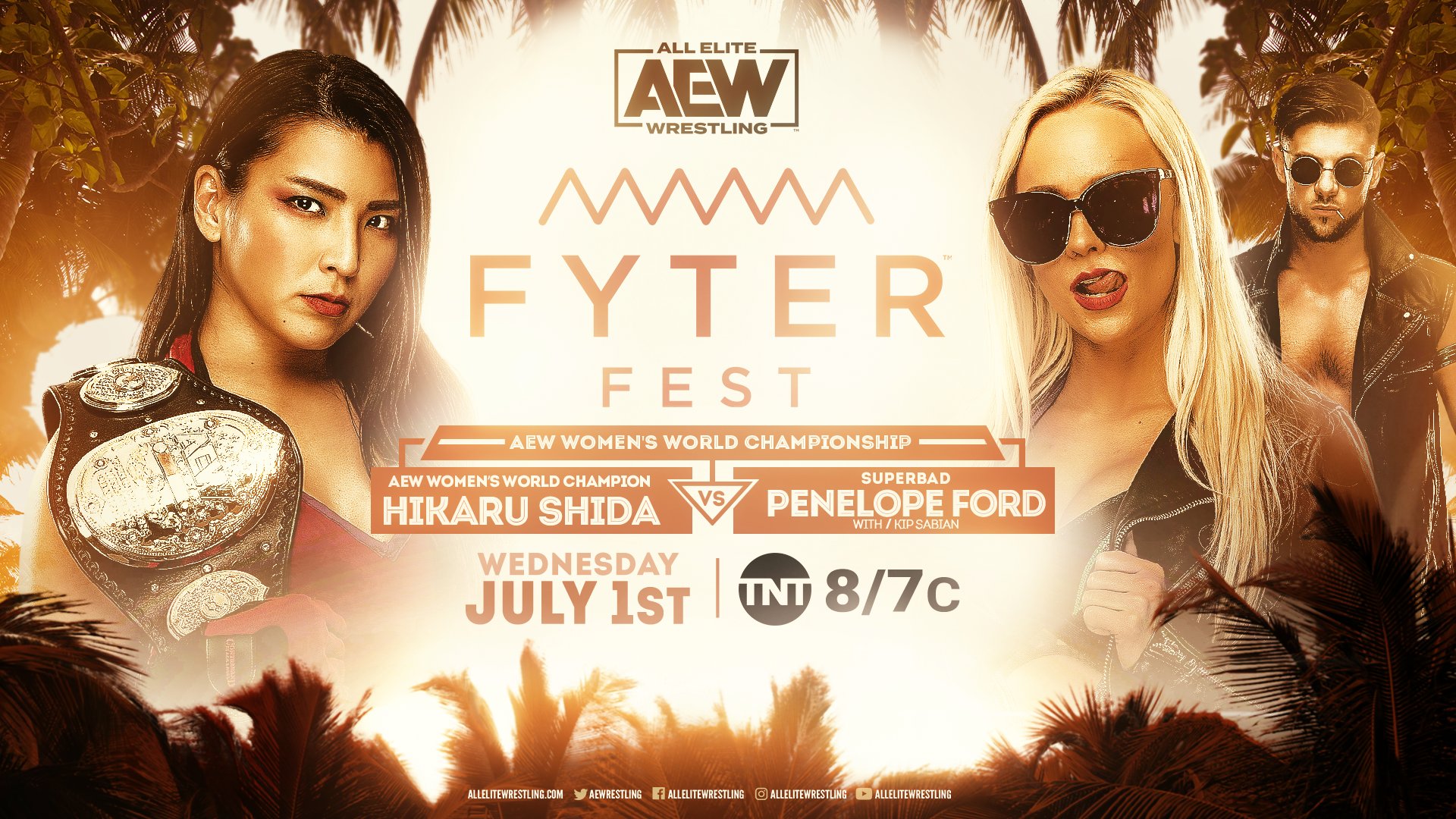 Penelope Ford vs AEW Woman’s Champion Hikaru Shida: Champ complete with kendo stick! A nicely produced recap package shows us that Penelope is the money and future star with Kip Sabian fulfilling the Mark Mero role in this relationship. And either my Japanese is getting better or Shida doesn’t need subtitles. First, we have the best ref in AEW Aubrey Edwards eject Kip from ringside. Is it COVID concerns, or does she just know he’d try to interfere and Aub’s ain’t having it?

With Kip gone, the tale of the match is Penelope in the fight of her career against Shida. And the champ does what she always does– wrestles hard and fast, with some nice near-falls and inventive counters to big moves. After Kip’s comeback doesn’t work, Ford hits a big ol’ Lethal Injection for the 2! Hikaru comes back with the Falcon Arrow for another 2! With Ford showing some true grit Shida finishes her off with the Million Dollar Knee. A valiant effort from Penelope but Hikaru’s defense is just too damn strong. – 3.75/5 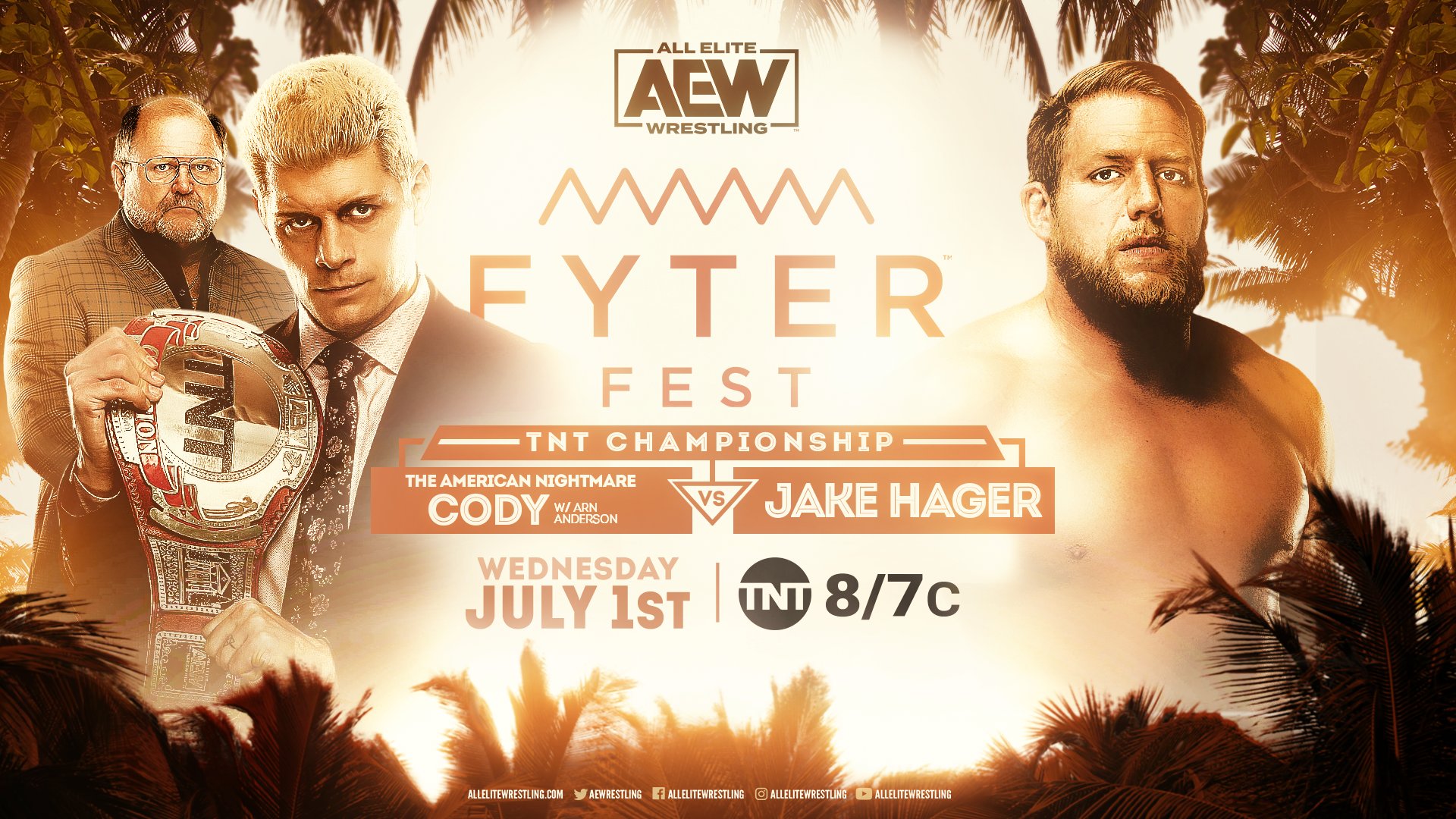 The Inner Circle’s Jake “Rock Hard” Hager vs AEW TNT Champion Cody w/ The Coach Arn Anderson: Jericho was yelling about Mike Tyson as the ring introductions pointed out that Hager’s wife Catalina is now by his side and we’re reminded that Cody has had 5 matches in the last 4 weeks defending the new TNT title against all comers. Each man only has one loss a piece this year, so let’s see who’s leaving with the W tonight. Jake has the pedigree, where Cody is no slouch when it comes to mat wrestling himself.

These two battled in the ring, on the mat and of course the chaos spilled to the outside of the ring where Hager took A-Double off the board. Jake used all of his size and power to rag doll Cody from pillar to post when Cody finally started to mount a comeback. A vicious springboard top rope cutter was the opening that Cody desperately needed to turn the tide of this title defense. Hager’s wife slapped Cody, and while the ref argued with AA, Dustin Rhodes came to the ring, slapped Jake! The pin came where Jake thought he had Cody tapped as Cody rolled Jake over and pinned him as he passed out. Jake wasn’t happy that he lost and blasted the ref! Rut Ro! – 4/5

A brief check in with Darby Allen in black and white doing his best CKY impressions. And…it’s Freshly Squeezed! Mere feet away from Jericho! Tensions are high but that match is a week away! 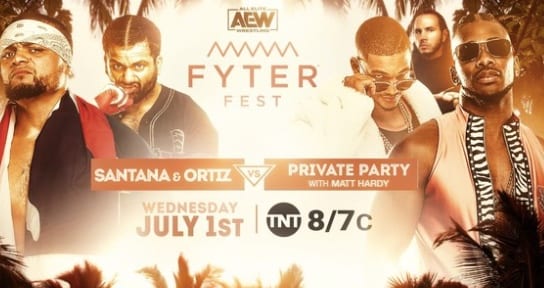 This isn’t the Inner Circle’s night as they once again lose tonight as Private Party picked up the win. This match was mostly background for Jericho to continue to escalate his hostility towards OC, with a post match scuffle where a “pull apart” kept Jericho from getting his hands on Mr Freshly Squeezed. – 2/5

Brian Cage vs Jon Moxley has been moved to July 15th, missing Night 2 Of Fyter Fest. Now it’s the main event of Fight of the Fallen! Taz is here running down the other guy’s sloppy testing. Remember how it works gang, second place always talks about first place while first place never even acknowledges second place exists. It’s a shoot, brutha! 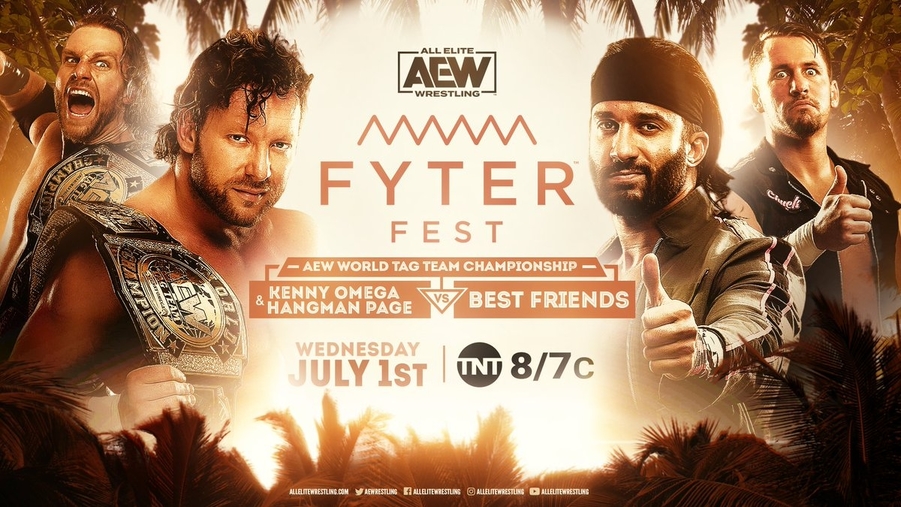 Main Event – AEW Tag Team Champions The Elite’s Kenny Omega & Hangman Adam Page vs The Best Friends, Chuck & Trent: Trent’s Mom drove them to the arena for their first title shot– complete with a kiss on the cheek for good luck. Yep, that just happened. Page & Omega made their separate ring entrances like all the great tag teams do/did. 162 day reign as the champs is the “put-together” team in a company filled with actual tag teams. At least these four men all know what they’re doing here.

As usual, Page did his stuff, Omega did his stuff, as Chuck & Trent did their level best. But that’s just not good enough to take the belts off the Elite. FTR hit the ring, beers in hand, to have a cordial beer bash — until Omega poured the whole beer out, and not for his homies and not because it’s Canada Day. Things got tense but We Were Desperately Outta Time! – 2.5/5

A solid showing for the first half of FF2020. No gold changed hands, But everyone worked their butts off. Next week Fyter Fest, Night 2 brings us: Nyla Rose vs ? All of SCU v Dark Order w/ Colt. Joey Janella v Lance Archer. Private Party vs AEW Champs The Elite. Young Bucks/FTR v Lucha Bros/B&TB. And then in two weeks?!! Cage v Jon Moxley (thanks a lot Rene) for the AEW championship. Stay Safe!