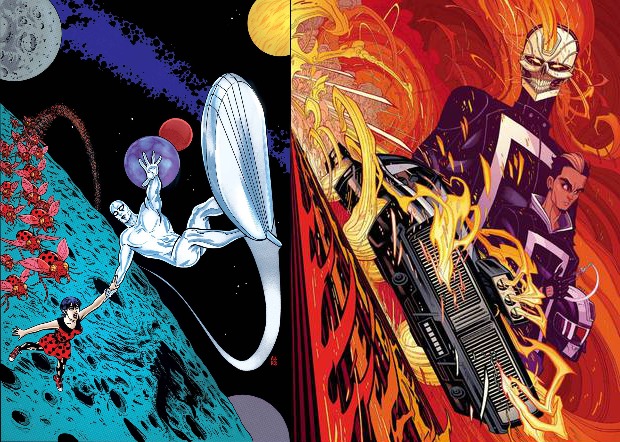 How long has it been since Silver Surfer had anything besides a mini series?

The first that comes to mind is his 90’s run that was chock full of more emotional angst then a hipster’s wet dream. “Oh my god I’ve killed numerous worlds full of people,” cared no one ever. Now go cry onto Galactus’s apron. Which is one reason writer Dan Slott (Superior Spider-Man) chucks out a ton of Surfer baggage into space with this All-New Silver Surfer.

And while Norrin Radd is both honored and feared throughout the cosmos, Slott does’t let this weigh down our silvered Californian. This first issue is fun, taking place before the Point One issue that was released a couple of months ago, and spotlights the eventual meeting of Surf and his new traveling companion/likely love interest, Dawn Greenwood.

If you think about it, this series is a bizarre idea. Slott’s wit has no doubt worked wonders with Webhead, but healming a known board-up his ass seemed like a stretch. But under this writer’s wing, this Surfer is looser and even has himself a few comical one-liners! Coupled with the acidic, Skittle explosion trips of artists Mike and Laura Allred (FF), Radd reflects the I-swear-I-don’t-do-mushroom days of Roy Thomas’ stint on Doctor Strange.

Overall, nothing about the All-New Silver Surfer is either too epic or daring, but that was certainly not the goal of this new take. Rather, it aims to be more of a zany build up to a cosmic explosion. By expanding and not being hampered down by the past, this new Silver Surfer run should make old fans and new fans very pleased. NOW, go catch the wave!