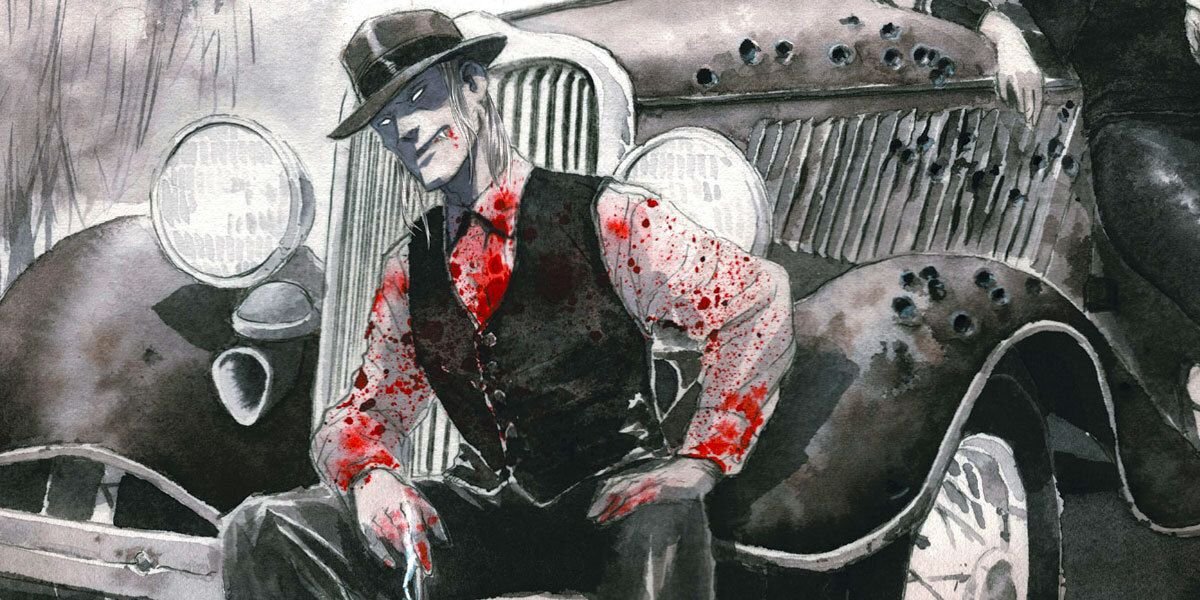 Just in time for Halloween, DC Comics released the newest chapter in the American Vampire series. Writer Scott Snyder and artist Rafael Albuquerque return to the series and bring the same energy from the Vertigo line into the Black Label family. DC Black Label made the right choice finding a home for American Vampire 1976, and releasing the first issue in October is on brand.

American Vampire 1976 picks up in the era which shares the title, discoooo is killer. Issue one tracks some returning favorites from the series with some slight changes. For example: we find out what a now mortal Skinner Sweet is up to. VMS is trying to hold itself together while investigating a killer dubbed “The Peeling Man,” and the connection to The Original Evil. Did I mention Travis Kidd? 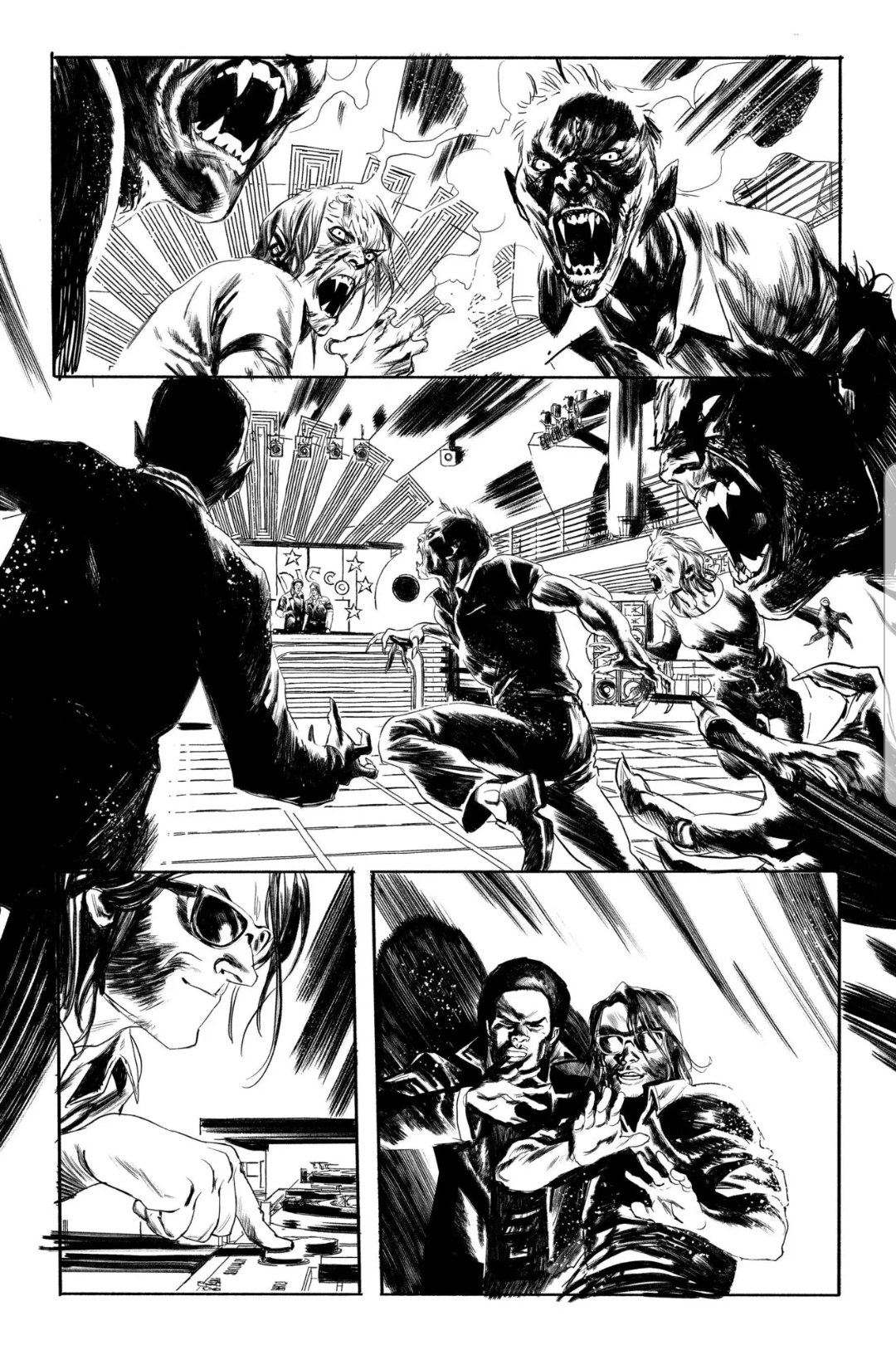 There are rednecks, explosions, Evel Knievel-esque stunts, secret specie organizations, EVIL, a heist scheme, and DISCO?! The issue ends on a cliffhanger that I will not spoil here, but I encourage fans not to sleep on this next chapter. It will be the death of you. 4.5/5 Unholy Bibles.

“The Joker War” reaches its inevitable climax in Batman #100, and it’s the end of a massive crossover that once again changes the status quo for the Dark Knight and his family and blah blah blah. The year-long arc — which kicked off when the Joker managed to steal the entire Wayne Enterprises fortune — finds some of the familiar Bat-characters falling back into familiar roles (hello again Oracle!), and the sight of Batman and Joker coming to blows as the Joker wears a Joker-ized version of Batman’s newest suit made for cool visuals, but I couldn’t help but feel that this climax was treading old ground.

That isn’t to taking anything away from writer James Tynion IV, nor artist Jorge Jimenez. They do solid, superb work here, and consistently manage to do so no matter what title they’re working on. 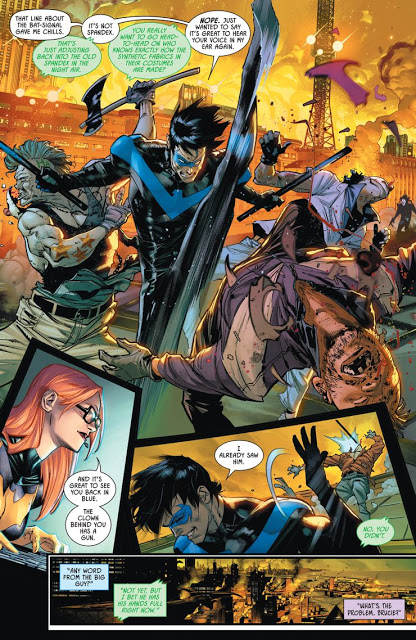 This massive arc seems a bit passe, truth be told: ever since the Death Of The Family, the whole arc with Mer. Bloom, and then Dark Nights: Metal, and now the continuation with Dark Nights: Heavy Metal, the entire Batman mythos seems to have a massive reckoning and restructuring, with the main antagonist tending to be the Joker, or somehow tying to him. Tynion IV, along with Scott Snyder, has continually reinvented the Dark Knight. I just wish that some things would last longer than two to five years before another major makeover. But maybe that’s just me…someone pining for a solid story, maybe a standalone or two- or three-issue deal. In, out, tell a story, and no need to reinvent the wheel for the fifth time this decade.

I was initially reluctant to read yet another annual Halloween story of half-assed collaborations. After reading the line-up and perusing through the art, my interest was piqued. I’m seriously happy I read this and now recommend it. It’s an almost perfect alchemy of DC’s magic, horror, humor, and science. The book delivers some elaborate superhero and even villain team ups. The artists really put in their “A” game with all of their styles.

The weakest part of the book was the Orphan and Orca team-up. Maybe because I’m still upset they can’t give Cassandra Cain her proper, No Man’s Land, Batgirl mantle. Maybe Batmanhattan who laughs will shake things up after Death Metal and we can get the Oracle and Batgirl combo again. 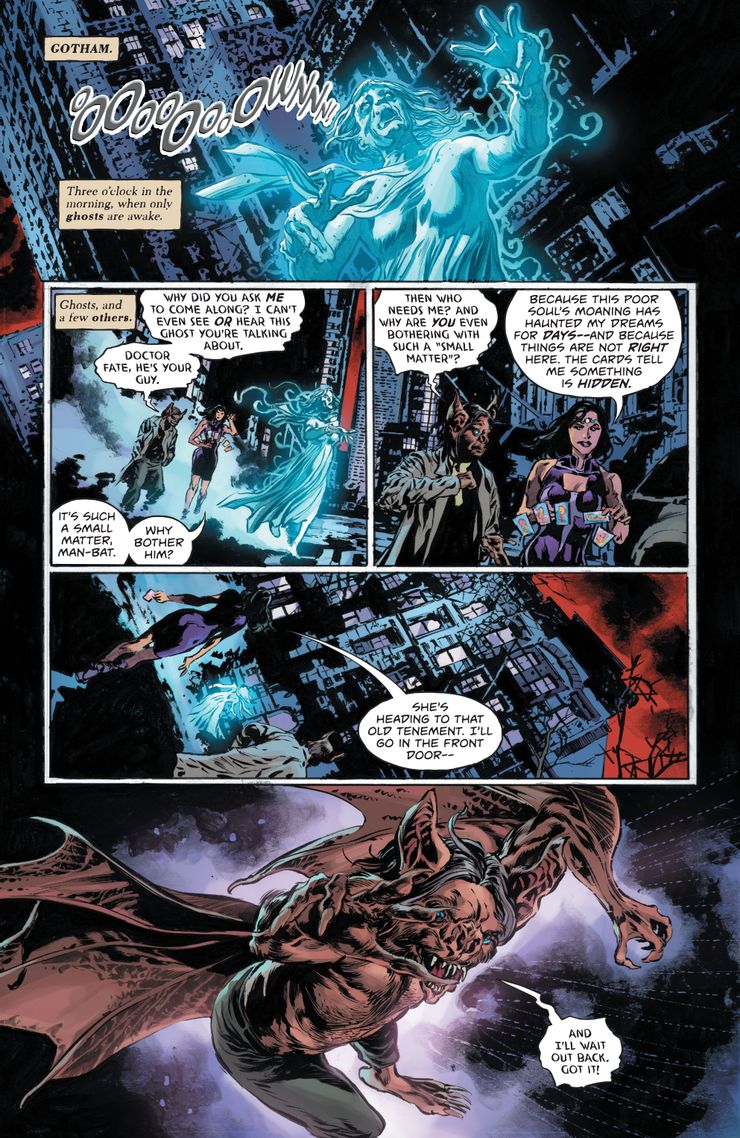 I was already satisfied with the Man Bat & Madame Xanadu, Batman & Sorta Dr. Fate, and Hal Jordan with the Demon team-up. But the book behaves like a Grandma pouring yet another hearty serving with a funny Aquaman & Frankenstein tale, Wonder Woman with Raven, Ras Al Ghul & Solomon Grundy, Supes & Swamp thing, the hilarious combo of Klarion and Beast Boy, Orphan and Orca, and end the Bar Crawl of Vignettes at Hitman’s favorite Bar with Baytor vs Darkseid.

In The Doomed and Damned, Batman stoically handles a job for John Constantine. Travis Moore gets an honorable mention for the entertainingly funny and clean look of Beast Boys to Men. I hope Solomon Grundy story reverberates into Bat Continuity because it was pretty clever. They combine DC’s Magic with Science or Brawn in almost every story. In short, it’s worth every penny as a great read and collection of art. Pick it up. 4.5/5 Bibles.