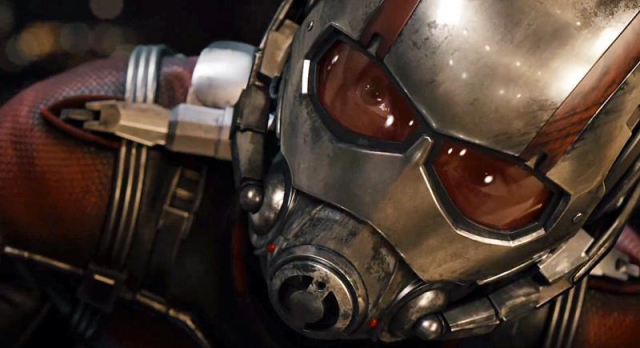 With Marvel’s onslaught of new titles [including a new AGENT CARTER comic!]; Hal Jordan settling down from the Godhead to deal with, uh, Girlgrief; dweebs Star Trekking into Monkey territory; and more impressive risers from the indies, 2015 is already starting to look like a banner year for great new comics. So, read on and let us know if any of these comics interested YOU this week.

It’s the Sunday Stash. What else?

Following the success Marvel has had with B-list character-driven projects, such as Hawkeye and She-Hulk, we see that friendly neighborhood strategy continued with the release of Marvel’s latest cinematic trailer for Ant-Man starring Paul Rudd, along with the rebooted Ant-Man #1 comic.

It’s a humanizing endeavor, by wordsmith Nick Spencer (Morning Glories) and inkman Ramon Rosanas (Fraternités), for one of Marvel’s tiniest heroes to date. Analagous to Aquaman in the DC universe, Ant-Man has always been seen as sort of a dud. So how do you build a series around a character whose main “super” power is talking to ants? You take the super out of him, and build your story around the redemption aspect of a character, driven to be more than an absent father.

The story follows Scott Lang, as he attempts to regroup after his leadership role with the Future Foundation, and the return of his daughter, Stature. Thankfully for those not familiar with this inheritor to the Ant crown, Spencer does an excellent job touching on the highlights of 30-years of comics. One issue that this True Marvel Believer had, was the rewriting of characters on a whim. If you had been a follower of Young Avengers or Future Foundation like myself, you will be poorly rewarded for your diligence for knowing your Marvel lore. Thrown out the window is any semblance to past incarnations of Scott or Stature. Gone is the fearless leader that questioned himself; or the young woman that fell in love with a robot, and led the Young Avengers throughout numerous adventures. Replacing them, is a down on his luck, two-bit loser, and a preteen princess that sounds like she’s straight out of a Disney show.

Marvel does make an excellent choice in helming illustrator Rosanas, though. Coming off the heels of his quirky Night of the Living Deadpool, helps Rosanas fit right in with the shrinking, isolated Avenger. If Rosanas’ goal was to give the reader the same loneliness that Lang deals with, then an excellent job was accomplished; although his short angles and compositions still give this fellow artist the feeling there are tighter choices to be made out there. Nonetheless, Rosanas seems the right man for this ill-fated Marvel movie tagalong. Spencer’s irredeemable Ant-Man is a must-buy for Marvel fans, and may accomplish its goal of assisting in filling seats in Marvels biggest film gamble yet! 4/5 Ant Colonies Agree!

Oh, but your Marvel Apostle is not done. Jorge Corona (Image’s Goners) is at it again, bringing a much cherished refresher to the comic industry; with his newest release from Boom Studios!, called Feathers. The story follows a young boy/bird, named “Poe,” who is completely covered in feathers; as he manages the city where his “guardian,” Gabriel, has raised him for the last eleven years… Until one day, when he meets the young and adventurous Bianca, daughter to the King.. From there, a charming tale begins. Feathers is a heartwarming Pixaresque take on time-honored stories such as Aladdin. Though fun for kids, there are adult themes that underlie this aspect; which will help any age appreciate this comic. Corona paints a darker cartoon environment that is one part charming and one part fearful. Overly ambitious and offering a wide range of emotions through storyline and palette, Feathers is a nice first issue that gives you a glimpse of a wider world that sets itself as an all-ages book; but also delivers a darker tone that will satisfy everyone in the family. 4.25/5 Birds of a Feather agree.

I have only two words to describe this series: “HELL! YES!” Wolverine is dead (well, presumably); while Mystique, Sabertooth, Daken, X-23, and Lady Deathstrike have all been kidnapped by a group of new, super anti-hero experiments — who have shortened lifespans, soon to expire (a reference to the Replicants in Blade Runner, perhaps?).

In Charles Soule‘s (Inhuman, Swamp Thing) nifty script, they are searching for the one thing that could save their lives. Or, more apropros, strains of dead Wolvie’s healing factor DNA? But the surprise villain in the end has a scheme of his own!

Wolverines #1 is classic Weapon X-Men with a twist. My claws are sniktting through my knuckle flesh right now, in anticipation of the next issue in this series. I see it being very short lived. But! The humor, the violence, the carnage; and the familiar characters are everything a Mutant Lover will freely bleed for. 4.75/5 Red-Blooded Mutants.

What if a typical housewife in the 1960s was actually a contract killer? Well… Joelle Jones (Madame Frankenstein, Brides of Helheim) and Jamie S. Rich (Queen & Country) — reigned in alongside Dark Horse Comics — have your gal!

Josie Schuller. Mother. Wife. “Picture Perfect” Homemaker. Josie is a sly killer, who gets down and dirty while keeping her goddamned dress spotless. Lady Killer jumps right into the story! She kills a contract by selling herself off as an Avon woman… These bloodypages are aided by awesome art from Jones herself. Talk about a do-it-all-type alpha woman.

Above all else, this comic surprised me! It was interesting, fun, and, above all, left me interested as to where it could all go. Dark Horse, in my comic book, always knows how to put forth great new original titles. And I think, Lady Killer, is a fresh take on feminism. She might be a homemaker, but it’s just a cover, for a real job, no man can handle himself…well you know…without brains and estrogen. Wink, wink! 3.5/5 Rolling Pins.

HOMERINGING PARTAAYYYY!!! Hal’s back, after a long multi-part crossover event; and all he wants is an ice-cold, lantern green beer! But he’s reluctantly visited by his “Three Ghosts:” Christmas Flash, Lantern Present, and A Christmas Carol. Let me explain: Hal Jordan has personally fallen a long way since his Justice League days, and Barry Allen’s presence in this issue only makes reference to Hal’s glorious past: Back when he was in the Justice League, things were amazing! Barry even goes so far as to compliment his normally, egotistically green friend. Original power ring-bearing backup, Guy Gardner, is the Lantern Present. He’s sporting his new look: Along with his even more arrogant, badass, I-don’t-give-a-shit attitude, because of “his” ring, a mission Hal put him on in the first place! Gardner is even “allowing” Hal to be on Earth in the first few panels; a clear reminder of what state even his home is in (also a deal Hal made, giving up Earth to the Reds). Gardner is dealing with it, but he’s a pretty constant reminder that Hal is not handling his newfound position all that well.

And finally, Carol Ferris. As if there was already nothing to look forward to, Carol reminds him just how far he’s fallen: she’s in love with Kyle Rayner. Crazy Charles Dickens allegory aside, this issue shows not necessarily what state the corps is in after the past few events, but the state that Hal is in. If that wasn’t clear enough, artists Admira Wijaya and Andrew Dalhouse (making everything look like amazingly smooth velvet—kudos, to a seriously fantastic job!), put Hal in his civilian clothes for the majority of the book. He’s literally as vulnerable now, as he’s ever been. For what Green Lantern #38 lacks in space fighting laser action, comic scribe Robert Venditti (X-O Manowar) makes up for in literary complexity and maturity. These are the types of books that turn one-dimensional costumed characters into multifaceted heroes and martyrs! 4.25/5 Humble Green Corpsmen.

Born of Marvel’s Original Sin, and dime-holed down the ink-barreled revolver of comic hitman Rich Ellis (Super Foes of Spider Man) — while illustrating the linguistically lethal stylings of the cunningly courageous Kathryn Immonen (Journey Into Mystery) — comes six chambers-worth of hollow-tipped lead to the temple, triggered forth in the form of: Operation S.I.N. #1. Colored with proper period precision by Jordan Boyd (Star Wars: Legacy), this two-dimensional vehicle for fellow WWII Vets, Cold War Heroes, and S.H.I.E.L.D. Agents, Peggy Carter and Howard Stark, comes on like a Nagasaki A-Bomb! America’s combat troops have been dug in truncheon-deeply within the confines of the Korean War for the past two years; when we reconnect with the comely Carter, as she appears to reside in a certain state of “domestic tranquility.” The “hydras” of Peggy’s prolific past seem to be looming large, as the Midwestern State of Bliss Ms. Carter may now be inhabiting doesn’t hold out… Old habits die hardest, and Carter’s killer instincts come again to the fore; as she wards of her heavily-weaponized foes. A calling card from the man who put the Vibranium in Captain America (Howard Stark), causes Agent Carter to come calling in kind; and off to the Land of Cossacks they converge. A burly operative in the U.S.S.R., by the name of Woodrow McCord, comes lumbering in, looking like former ‘60s & ‘70s NFL Lineman Merlin Olsen (R.I.P.), as he looms large, over our Cold War compatriots; all before he’s knocked down to size by S.I.N.’s Peggy Liberty… What’s this? Peggy has pilfered the wares from Woody’s trench coat pockets? Could it be…some strange technology…alien to even Howard Stark, we see? Howard!!! What are you doing with that? What are you doing? What is that? What’s HAPPENINGGG???? The inhumanity of it ALL!!! Aaaarrrgggghhhhhh!!!!! 4/5 Fat Man A-Bombs.

Captains Log: January 1, 2015: “There seems to be…some…sort…of anomaly. Some…thing…altering both space, and time… KONNNGGGGGG!!!!!!” And if by this point, you can’t hear William Shatner screaming in your head…then, I, the “Reverend” Ryan Ford, have failed you as a writer! Yet, with the first entry into this dual franchise crossover, writers Scott and David Tipton (Star Trek: Deep Space Nine, Doctor Who) have succeeded triumphantly. Paired with artist Rachael Stott and colorist Charlie Kirchoff (Dredd), the team superbly captures the ‘70’s aesthetic that made these properties so popular in the first place. Modeled after the original cast, the spot-on dialogue for the crew of the Starship Enterprise would have even George Takei saying: “Oh my!!!”

The premise follows standard protocol, as Kirk and crew pursue a Klingon warship through a wormhole; only to find themselves thrust forward 1700 years into a parallel universe, where Apes are now the dominant species. Naturally, the Klingons are selling their advanced technology to General Marus of the Apes, whom I presume to be evil… And there you have it: The set up for the series. Not too much in the way of a post-apocalyptic future Earth ruled by Apes just yet; but the drastic change in setting from space to jungle showcases a rich color palette, and entertaining story devices. Like when George Taylor (Charlton Heston, basically) shows up to… Well, sorry.. No spoiler alerts here, Congregationalists!

Whether you’re a Trekkie, or just a fan of monkeys like me; this premier edition is right up you’re sci-fi jungle. It has all the earmarks of both classic series, with a few Apester eggs tossed in for the dedicated follower. The only thing to make it better would be an accompanying audio track featuring a remix of the Falco/Simpsons mashup: “Rock Me Dr. Zaius”. Cue the break-dancing chimps, with Uhura spinning on the ones and twos. 4.5/5 Phasers set to Ape Stun.