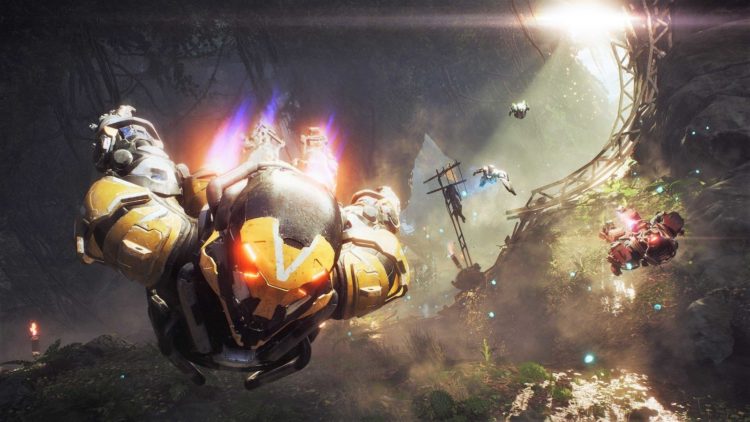 Editor’s Note: This will be Dee’s final assessment of Anthem. That said, you can bet we will have reviews of the game’s forthcoming DLC. If you missed the Geekdom Gamescast review of Anthem (w/ Adam Bowers), give it a listen HERE!

After beating Anthem, there were still tons of faction contracts, collectibles, abilities to unlock for each javelin, NPC’s to get to know in Fort Tarsis, and well, just two strongholds. If Bioware would have added at least two more strongholds, people may have been more satisfied with the end game content. Lets face it; after beating the story, all of the other free roam and side activities are redunant.

The NPC’s have interesting dialogue, but the real appeal is in the strongholds. The strongholds offer new challenges with large waves of elite and legendary enemies, new bosses, and masterwork loot. A total of four strongholds would’ve sufficed until more content is added, but otherwise I spent most of my end game grinding loot and becoming bored of the bosses I’ve slain many times. Part of this issue? Loot drops were not generous, even on grandmaster. It is also worth noting that one of the strongholds was in the demo, so the Swarm Tyrant wasn’t such a “whoa cool” moment. This left players who did play the demo, with only one new stronghold to tackle.

At this point, you have to know what you want out of a game. Are you someone who needs tons of end game content to keep your time occuppied for years? Or, are you satisfied with a fun game with at least 30-hours of non-repetitive content? If the former, perhaps waiting for the game to bring in more content is the best idea if you aren’t completely turned off at this point.

Since I typically platinum games, I got my money’s worth with the trophy roadmap keeping me busy. Playing with different Javelins and mix & matching abilities sincerely made redundant content feel fun and fresh. From a trophy hunters perspective, everything about the Anthem platinum is fun– that is until you grind for collectibles. The collectibles aren’t marked on the map and many of them randomly spawn, which is really bad.

Nonethless, I’m displeased with the lack of end game content, but I still had a good time with Anthem. I’m hopeful more free DLC will increase the looter shooter’s life span. Still… 3.5/5 Bibles.

Being a Bioware fan, I wondered how an open world multiplayer looter shooter, live-service RPG would fit into Bioware’s formula that typically has a deep story and detailed character development. While Anthem might be the weakest of the Bioware games, the dialogue with NPC’s and story telling is still good. For example, there is this one NPC at Fort Tarsis (hub area) who is still struggling with the loss of her daughter. It was my roll to either allow her to believe I am her daughter and speak to her daughter vicariously through me (so she can overcome that loss), or… I had the option to give her a reality check. Walking around Fort Tarsis and talking to NPC’s is substantial and several of the side missions are interesting, but the ending of the main story is very underwhelming.

It wouldn’t be suprising if many players felt talking to so many NPC’s bogged them down and took them away from the real fun of Anthem: getting out in the field to wreck shit and loot. Despite many missions feeling similar, it’s still extremely satisfying to try different guns and abilities with your javelin, as each javelin has their own unique set of abilities to mix and match. Toward the end of the game I unlocked an ability called Spark Beam for the Ranger, and it was a nice change from the grenade and missle abilities I used earlier in the game; it made me feel like Moira from Overwatch, if she only had a damage hand (AKA a dark mage). There are enough variety of abilities to make even the repetitive missions feel fun. Add switching your javelin to this mix, and that’s even more variety.

If I had to describe why Anthem is so fun, it would be mostly because of gameplay. Flying through the open world is hands down the best part of this game. The flying mechanic is easy to manage and really compliments the awe of entering a new space in the open world, where you can stop to hover for a moment and take in the beautiful sky. Flying is also a good way to retreat and regenerate your health in the midst of battle since there’s no cover system. You can also use this mechanic to hover in the air to shoot and use your abilities on enemies from a distance, which is especially useful as the Storm class, who’s hover time lasts the longest before overheating.

It is important to note that I played this entire game with friends or match making, so I can’t speak to how it feels playing solo. Yet, I can’t imagine it’s as fun with a combat system that has more depth when you’re doing combos with your team. For instance, the storm Javelin can freeze enemies and the Ranger can use a grenade or missle to explode them. I’m sure this can be done in solo, as each Javelin has their own primer and detonator ability, but it definitely happens more often as a team. I was initially worried that it wouldn’t be smooth, Anthem has the smoothest gunplay I’ve ever seen in a Bioware game.

While many of the areas in the open world are beautiful, the terrain is mostly lush. I’m hoping future content opens up new grounds with different terrain, like a snowy mountain. There are many collectibles sprinkled around the world that supplement the game’s lore, so I’m looking forward to exploring the grounds more to engage in world events, find new loot, and collectibles.

Playing with friends enhanced the gameplay but took away from the story. It’s easy to experience later missions that you’re not up to, which makes it hard to track what point of the story you’re up to, and can lead to spoilers. Fortunately, the game warns you, but it’s worth noting that playing with others can take away from the story. Plus, you may feel rushed away from talking to NPC’s, exploring, and managing your loadout.

Anthem could really use some quality of life adjustments. The most notable being the loading screen. Sure it’s long but the bigger issue for me is there are too many loading screens. I feel the forge should be part of the menu screen to seemlessly sift through challenges and loadouts, and change them on the fly. Additionally, going into the grenade menu to access the main menu doesn’t make sense and caused me some time before realizing I could access the main menu from The Forge. Players should also immediately teleport to the team.

There are also several bugs, such as enemies teleporting across the screen, incoming damage from unknown areas, and friends not appearing on the social list. Nonetheless, none of these issues are game breaking and they have not taken my enjoyment away from the game.

So far, Anthem is a fun game that has issues, but in the age of patches and live service gaming, I have confidence that it will become a more solid creative project with time. If you’re not someone who can accept a game before it evolves, I recommend you wait until an update piques your interest. 3.5/5 Bibles.