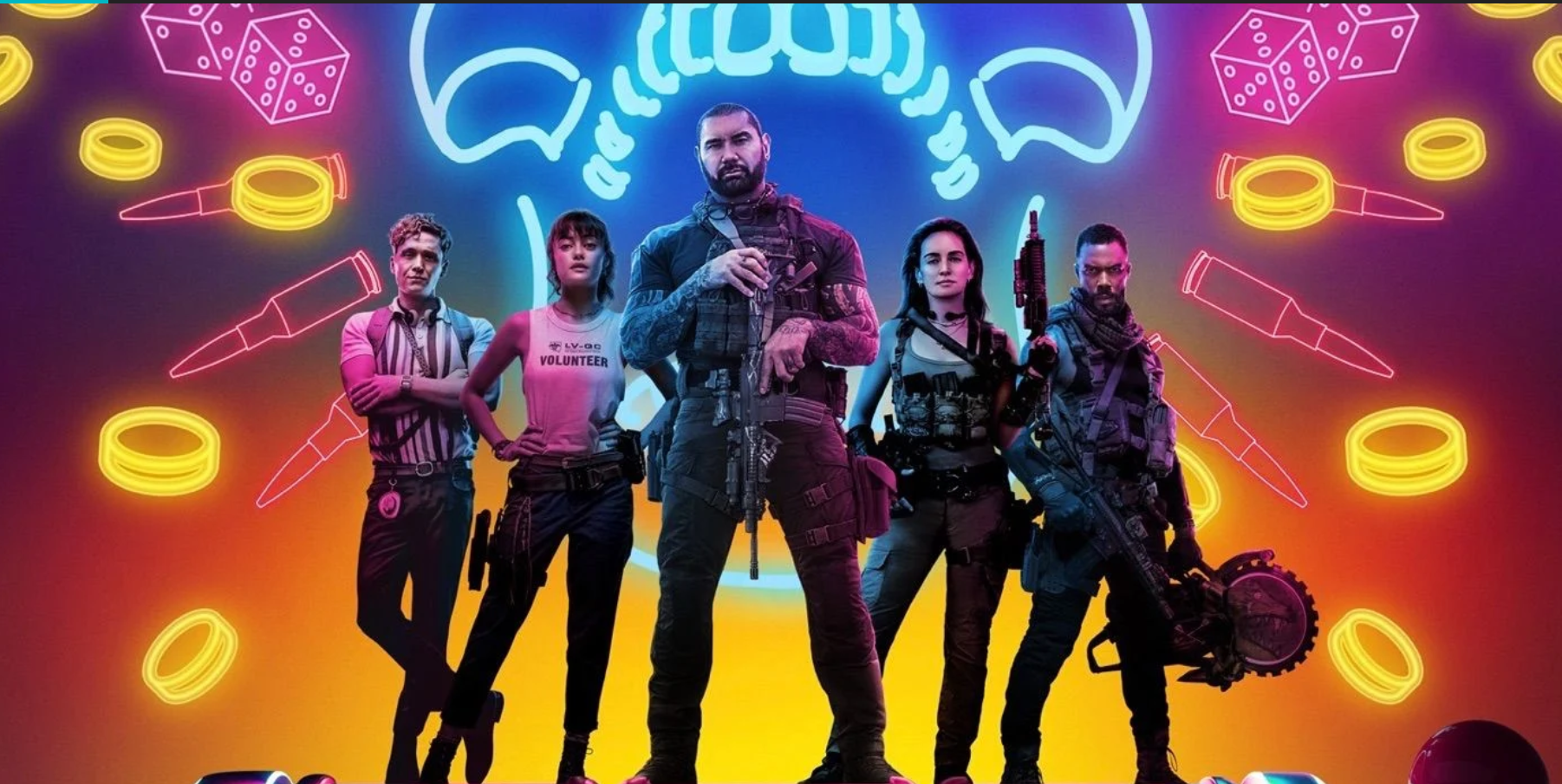 Army of the Dead is Zack Snyder’s first film in a decade not based on a DC Comics property (his last was Sucker Punch back in 2011). With a screenplay co-written by Snyder, Shay Hatten (the John Wick franchise), and Joby Harold (Guy Ritchie’s King Arthur: The Legend of the Sword), Army of the Dead is set in Las Vegas where the zombies have been walled off in the city and surviving humans attempt to live normally.

Zombie horde fighting veteran Scott Ward (Dave Bautista) has gone into hiding and now works at a diner as a burger flipper as his daughter Kate (Ella Purnell) works as a volunteer at a camp just outside the wall providing for children and other survivors. Bly Tanaka (Hiroyuki Sanada) hires Scott to retrieve $200 million located underneath the Las Vegas strip in a seemingly unbreakable vault.

Scott puts together a team to pull off the impossible for a $50 million cut for him and his team. However, they have a limited time to pull this off since in less than 48 hours an atom bomb will be dropped on the infected part of Las Vegas wiping out the undead masses once and for all as well as anyone who may be within the walls.

What makes Army of the Dead work so well is that it is an ensemble film that absolutely makes the most of its entire cast. The female characters are strong and resourceful and what Snyder does with zombies isn’t just a rehash of everything you’ve seen in similar films.

Similar to George Romero’s Land of the Dead where zombies learned to communicate with one another, AotD features the undead evolving into something new. The shamblers you’re familiar with are around, but there’s also a new threat; zombies who are stronger, faster, and smarter than the average walking corpse.

These new zombies have the ability to reproduce, wear armor that blocks headshots, and ride zombified horses while wearing capes. There’s also a zombie white tiger named Valentine with a memorably gnarly scene that is on par with the bear sequence from The Revenant.

Known for typically being a big brawler or being the go-to big guy for comedic relief, Bautista seems eager to prove that he has more to offer as an actor these days. He still uses the signature moves you recognize him for like body slamming zombies through poker tables at the casino or even wrestling a zombie in a helicopter as it spins out of control to pulse pounding results. But Bautista is surprisingly emotional here and is convincingly torn between the women he loves in the film and doing what’s right for the daughter that currently hates him.

Specific highlights of the cast include Matthias Schweighöfer as Dieter, the German locksmith. He has this Hans Landa kind of charisma about him. He’s very smart, but he’s also unfamiliar with American tradition and weapon use. His shriek as well as his celebratory dancing of successfully using a gun on a zombie for the first time are two great examples of why the character is amazing.

Tig Notaro is also fantastic as the helicopter pilot Marianne Peters. Peters is mouthy, kind of weird, and unusually loyal. Her inability to shut up is what makes her so memorable.

While Army of the Dead has some unbelievable action sequences loaded with exceptional explosions and massive gore that is this brilliant concoction of practical effects and CGI, the film still has some flaws. The screenplay is lacking at times and has some pretty cringeworthy moments that mostly lie within the opening sequence (road head essentially leading to the vault opening) and Theo Rossi’s Burt Cummings character in particular.

All of the predatory and sexually demeaning material towards women in the film feels dated and in bad taste in our current times. It’s dealt with in a way that is essentially satisfying to zombie and horror fans, but the fact that it is included at all is a little disappointing.

The fact that we’re getting two spin-offs from Army seems rewarding since it seems like a waste to see some of these characters in a one and done kind of scenario. Matthias Schweighöfer directed and will star as Dieter in Army of Thieves, a prequel film that wrapped filming in December of 2020.

Army injects some much needed vitality into both zombie films as a whole and Zack Snyder’s career as a filmmaker. Dave Bautista is also the best he’s ever been as far as his acting ability goes. Gory as hell and entertaining through and through, AotD is a must-watch for action and horror film fans alike. We really did need more scenes with Vanderohe (Omari Hardwick) using that giant circular saw to tear through zombie flesh though. 4/5 Bottles of Sterilizing-Zombie-Wound Whiskey.