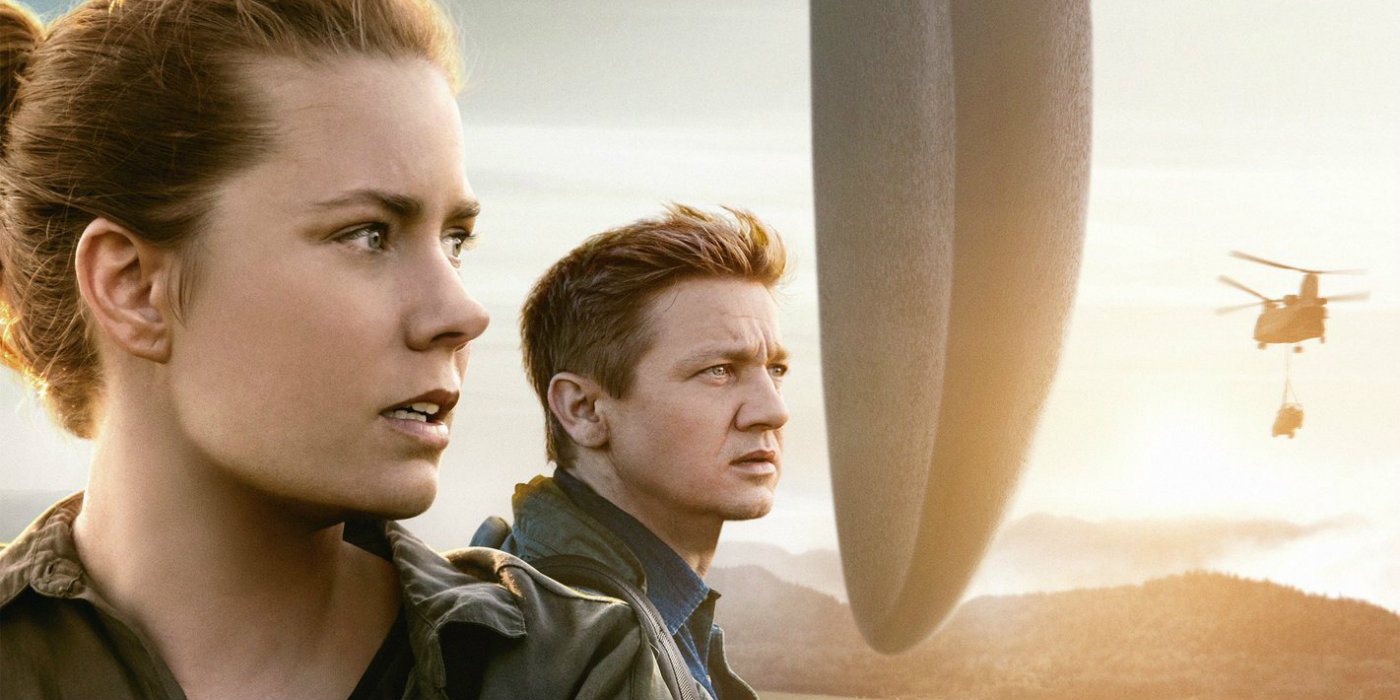 Based on author Ted Chiang’s short story “Story of Your Life,” Arrival is directed by Denis Villeneuve (Prisoners, Sicario) with a screenplay by Eric Heisserer (The Thing prequel, Lights Out). When a dozen extraterrestrial vessels (that look like giant black jelly beans) emerge at various locations all over the world, a team of scientists is put together in an attempt to make contact and discover why they’ve come to earth. The fate of humanity rests in the hands of a team led by US Army Colonel Weber (Forest Whitaker) but also includes mathematician Ian Donnelly (Jeremy Renner), linguistics expert Louise Banks (Amy Adams), and CIA Agent Halpurn (Michael Stuhlbarg).

The dramatic science fiction film has an opening that is just as heart wrenching as the beginning of Pixar’s Up. While it may seem peculiar to compare a Villeneuve film to an animated one, those first few moments of Up break your heart in a matter of minutes without a single word being spoken. In Arrival, while there is dialogue, you can feel your heart shatter in similar fashion as Louise Banks is shown sharing tender moments with someone close to her as they progress over the years before eventually succumbing to a rare illness. Adams sobs quietly while straddling a hospital bed and quietly whispers, “Come back to me.”

Arrival almost creeps along during its nearly two hour duration, but it’s never boring. While this team is piecing together an alien language, the film is methodically unraveling. This is portrayed as a worldwide phenomenon and it always feels that way. When you first see Ian Donnelly and Louise Banks carted out to the alien aircraft for the first time in their biohazard suits, this sensation washes over you: you know you’re watching a film, but it almost feels genuine. The camera is a vital tool that transports the audience to ground zero as the most intelligent individuals on the planet attempt to crack a language that is more or less a complex Rorschach test.

The film obviously isn’t going to be as abstract as Enemy, Villeneuve’s other less popular film from 2013, but Arrival does incorporate some of the imagery from Villeneuve’s psychological thriller. When you first see these colorless, floating, inverted blimps in the sky, they’re revealed almost in Jurassic Park fashion. A helicopter barrels over a mountainous green meadow in Montana and there sitting out in the open field is this massive, mysterious, and threatening vessel with fog rolling in from all sides. The imagery alone is wondrous and intimidating at all times to represent these alien creatures consistently treading that thin line between being a threat to the human race and actually coming in peace.

Contact is made inside the aircraft through a door that opens every 18 hours. Once inside, the gravity changes and the inner walls are layered almost like erosion found in rocks over hundreds of years but to a more polished extent. Humans and aliens meet at this wall-like barrier while the atmosphere the intergalactic visitors reside in is this grayish-white mist or fog, which automatically reminds you of Frank Darabont’s The Mist. The creatures are referred to as heptapods since they have seven feet. They are octopus or spider-like in appearance, but also drift upright like a human hand standing up on its fingers. These finger-like appendages are similar to tentacles, but the ends open up like banana peels as an ink like substance is shot out to reveal their language. The two are nicknamed Abbott and Costello for obvious reasons.

The influences from Enemy come after Louise has had contact with the aliens a handful of times. The change in atmosphere and otherworldly experience in general affects everyone differently. In Louise’s case, she begins to sleep less and has hallucinations that are indistinguishable between memory, reality, or dream. She sees one of the dark beings in her bedroom, which seems like an obvious nod to the giant tarantula found within Villeneuve’s Enemy.

The brilliance of Arrival mostly resides in the Louise Banks character. While it’s technically a combination of how the world is choosing to react to aliens, the scrambling of the government on ground zero, the deciphering of an alien language, and the unpredictability of why they’ve come to earth, what Louise Banks experiences and decides on over the course of the film is what factors into making the film so memorable. The concept alone is so common as far as science fiction films go and yet Villeneuve and Heisserer have crafted this uniquely fresh anomaly that is memorable and reflective. These flashes that Louise has throughout the film are overwhelming for the character and interrupt her work yet are naturally introduced to the audience. They softly fade in usually through a few soft spoken words or images of something like flowers in a field. There’s a deeper connection other than them just being forgotten memories.

After you hear that warning siren for the first time, it seems like that noise is incorporated into Johan Johannsson’s score. Abbott and Costello make whale-like noises and all of this seamlessly blends into a strange symphony that combines throbbing bass and growling strings to breathe life into these bizarrely fascinating beings. Arrival is a complex concept masterfully crafted into something slick and easy to understand. Although moderately budgeted, Arrival feels like a big budget blockbuster executed like an independent film; its concepts weren’t sacrificed for expensive special effects or overblown chase or action sequences. Arrival makes one hell of an impact because it’s unusually different.

You feel tense and anxious while watching Arrival since you genuinely have no idea where it’s going to go. Its visuals are remarkable and its storyline is so beautifully structured. Arrival is one of the most extraordinary, breathtaking, and thought provoking films of the year. This is what science fiction is supposed to be. The Blade Runner sequel is in good hands. 5/5 Floating Black Jelly Beans.