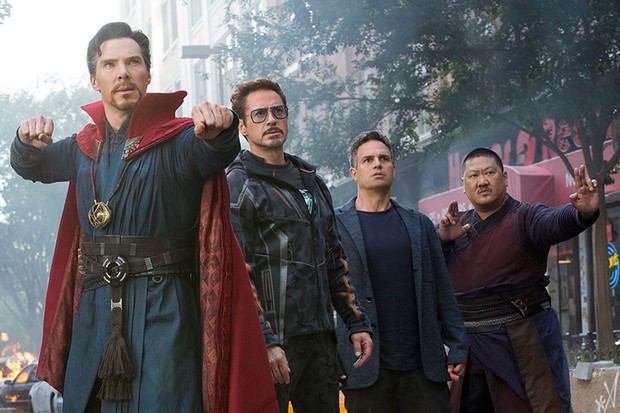 Another week, another set of comics to which to look forward, geeks and geekettes! Now that the high of Infinity War is starting to wear off — and we’re still a few weeks until Deadpool 2 kicks our meta asses! — we’ve got a few heroes of the paper and ink variety to follow! Let’s get this week started the write way, with some great writers looking at this week’s titles!

After the effects of Avengers: Infinity War I needed something of a pick me up and Jason Aaron and Ed McGuiness knock it out of the park with this first issue.  Jason Aaron is a fantastic writer and he has a knack for connecting all of his books together and this is no different.  Starting the issue off with his Avengers 1,000 BC we see the original bearers of the various totems we see in Avengers (original Black Panther, original Iron Fist, Agamotto, etc) and Aaron takes us through to Dr. Strange and Black Panther to the ‘Holy Trinity’ of Thor, Iron Man and Captain America working out their issues but as always when an earth ending situation arises, all issues are tabled and the Avengers assemble.

Ed McGuiness is one of the best artists out there, I don’t care what anyone has to say, It’s big, fun, loud and I think that it is going to look especially beautiful when you pair him with Aaron, and the Celestials.

While I wanted to see more Captain Marvel and She-Hulk, I get a feeling that they will be getting their fair share in the next issue.  Overall, it is a very fun book that, and while it doesn’t reinvent the wheel, it did get me excited to see what these two can do. I’ve been off the Avengers for a while, mainly because there were so many damn different teams, but let’s see if this duo can bring me back on board.  My answer is yes. 4/5 Slinging Bibles.

Leave it to Booster Gold to turn a simple wedding gift for a Bruce Wayne into a disturbing, depressing, and horrific future where Bruce Wayne was never Batman, his parents never died, and Selina Kyle is a locked up serial killer who truly thinks she’s a cat… Meow.  In the latest issue of Batman, writer Tom King shocks readers with a brutal, and violent alternate reality that has branched from the repercussions of Booster Gold going back in time to save Bruce’s parents. As he does, Booster Gold has a history of interfering, and things going horribly wrong before they go right, and gift-giving is no exception. Since he’s torn up the timeline tremendously, Bruce and Selina aren’t a couple, aren’t getting married, and in fact they’ve never met. Now Booster has to reunite them and get them to fall in love. Unsurprisingly though, restoring The Bat and The Cat’s best reality is not as easy as he assumed.

Writing my complete thoughts without spoiling what unfolds was difficult; I want Batman fans — and even more so Booster fans — to experience the “WTF” for themselves. We’re two issues into “The Gift” storyline, and we’re seeing a rare element of Bruce Wayne’s character: desperation. It’s heartbreaking. Although Tom King knows how to write a multi-faceted story more so than most working in the comics industry, he seems to have trouble finding Booster’s voice and writes him, at times, out of character. There’s a line between a stumbling jerk-off with good intentions and an insecure dumb ass completely oblivious to the world around him. (It’s a thin line, but it’s there). Artist Tony S. Daniel presents incredible work here, adding detailed intensity across the panels with action and emotion.  Huge kudos to the Batman Returns nod that had the fangirl in me squeeeaaaling in delight! 4.75/5 Booster Good Fan Club Stars.

DC Nation #0 showcases three preludes to three upcoming stories for Batman, The Man of Steel, and Justice League. These radically different stories give readers the presentation of different choices either picking up one or two of the stories or maybe all three. The Batman story sets up the tone for the upcoming wedding of Batman and Catwoman. Then, Superman sets up his current life in the Daily Planet. And last, four teams of the Justice League, including villains, must stop an imminent calamity in its infancy before it reaches earth.

In Tom King’s story, “Your Big Day”, while holding a man hostage in his own home, Joker eagerly waits for his invitation to Batman’s wedding. It’s a tense story in which Roger, the hostage, goes from begging for his life, to trying to kill Joker, to begging Joker to kill him. At last the mail comes in, and he is so delighted he “received” the invite he kills Roger out of joy.The catch, though? It wasn’t an invitation at all, it was a letter regarding a tardy from Roger’s daughter’s school. This was more than enough to get me to start guessing what could out of this upcoming story. Clay Mann’s art was thrilling and dry and kept me on edge. Tom King’s building on the anticipation of the wedding through Joker, was exciting to say the least I am eager to see what Joker has in store in June when Batman #48 releases.
Next, Brian Michael Bendis’s “Office Space”, involves Perry White presenting The Planet’s new hot reporter, Robinson Goode. Clark Kent also writes up a story on Superman foiling a black-market sale of LexCorp weapons. After listening to the details, Perry pulls Clark aside and tells him he’s missed a step, and he misses the reporter Clark used to be. Miss Robinson Goode later meets with an individual to inform him she’s in position to take over The Daily Planet soon. Who is she exactly? What does she want with The Planet? Overall Miss Robinson Goode may not have intrigued me much, I’m curious about Bendis’s character work for Superman. You’ll have to wait till the end of May for the release of Man of Steel #1 to find out.
Finally, “No Justice: Prelude” by Scott Snyder, James Tynion IV, and Joshua Williamson, set the prologue for “Justice League: No Justice #1. While attacking Brainiac’s homeworld, Colu, Superman narrated about Brainiac’s terrified warning of four beings who absorb galaxies to sustain themselves have just awakened. Now, four teams, based on the four cosmic energies, must beat them on Colu before reaching Earth next. The teams are lead by Batman, Superman, Wonder Woman, and Cyborg, filled out by heroes and villains. In the end, Supergirl, leaves the atmosphere to the shocking arrival of the Four Omega Titans. These three writers together just might be the Justice League of writers. Only some of the pros and cons for these teams were shown, along with setting up the struggles to come. Long time fans might be excited to see if these characters can put aside their egos and problems with each other to save Earth, and maybe Colu because they’re still on it. Find out this week starting May 9th with Justice League: No Justice #1. To new beginnings! 4.5/5 Bibles.
-Matt Garza

Death Or Glory has the feel of The Last Stand, A History Of Violence, and a much more action-packed, car-chase-filled adaptation of No Country For Old Men. I love all of those movies, so this title was right up my alley. Starting off with a veritable bang, writer Rick Remender throws a myriad characters our way: the independent, drifting, pin-up-esque female mechanic Glory Owens; a pair of crooked, dim-witted cops; drug runner (or is he?) Korean Joe; and the so-far-unnamed, stoic man whose favorite mode of execution is a mobile nitrogen tank.

Desperate to help her cancer-ridden mentor and guardian, Red (who has lived his life off the grid and off the books), Glory soups up her Challenger to rip off her drug-dealing ex. As can be expected, her plan goes awry, and she runs afoul of the aforementioned nitrogen-wielding-villain, and the end of the first issue ends with Glory in even deeper trouble, and with a few perforations for good measure.
The art by Bengal is dynamic, with a great use of motion and vibrant colors that continuously reminded me of Speed Racer. There was great sense of movement during a car chase, and the first instance of nitrogen-based-death was particularly well rendered and drawn. Rick Remender has great pacing, and this is a story that reads like a movie; the story opens innocently enough at a burger joint, before turning horrifically violent, and then BOOM! Title page, before the reader is is eased back into Glory’s domestic life. It was impressive, and this is a great start to what feels like an exciting, fast-paced adventure. I, for one, am gearing up and settling into the passenger seat. 4/5 Chili Peppers up the Ass.
-J.L. Caraballo