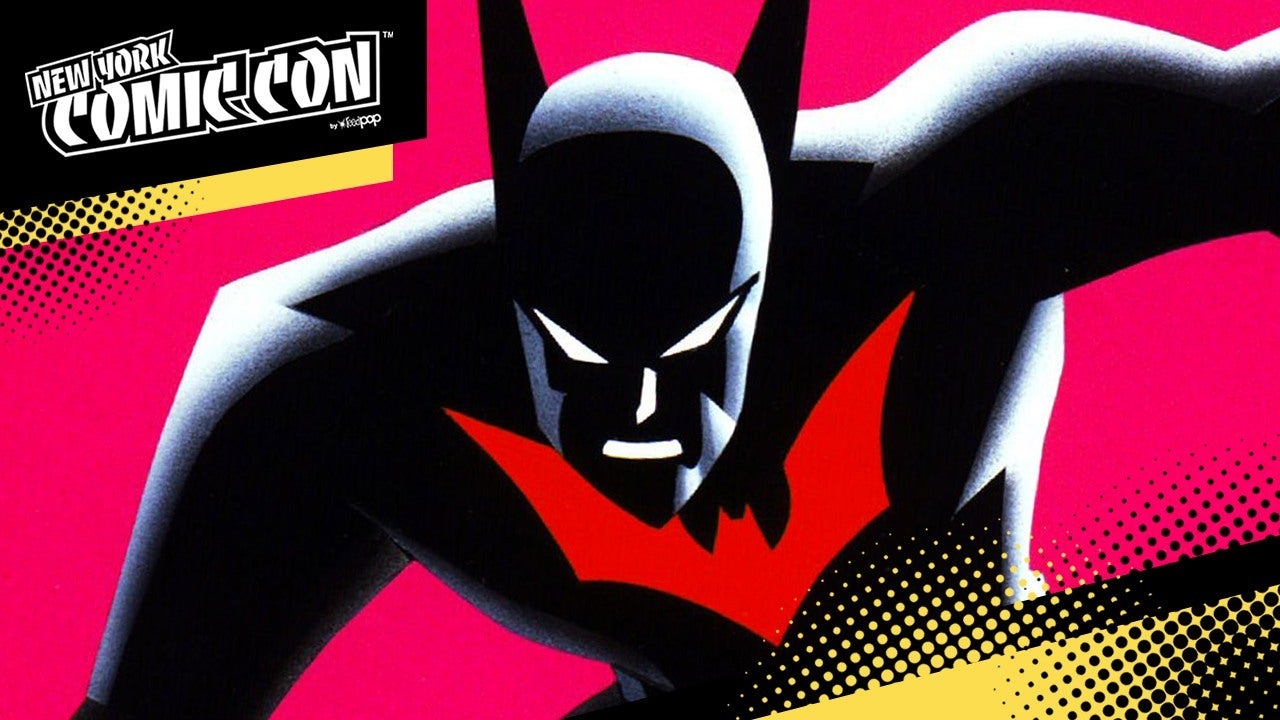 In preparation of the 20th anniversary boxed set of Batman Beyond, DC Entertainment sent its most recognizable faces behind the production to 2019’s New York Comic Con for a press round-table, which preceded the retrospective panel. Yours truly managed to make it behind the scenes, and what unfolded was a series of wonderful reminiscences of the creation of the series.

Series star Will Friedle was the first to sit down and answer questions, and he was charming to the last. Batman Beyond was his first animated series, and there was a palpable sense of surprise to the fact that it was already two decades old. The experience gave him many opportunities that others, obviously, would not be able to have afforded.

“I met my wife by saying I was Batman. I wasn’t lying now, was I?!” he quipped. It was important for him to play the teenaged Terry McGinnis as a polar opposite of Bruce Wayne; whereas Bruce Wayne was confident and intimidating, Terry had to be nonthreatening, but with a bit of cocksure attitude. Friedle openly opined for some unknown 17-year-old actor to step up and be cast in an (as yet unplanned) live-action version of Batman Beyond. Being his first voice-acting job, Friedle was constantly on edge about the role, and to this day quips that he’s “still waiting to be recast“. However, it was very much Kevin Conroy‘s work and mentoring that gave him the confidence to make the role as perfect as he could.

Asked about his favorite episodes, his first response was the Emmy-winning episodes “The Eggbaby” (more on that later), and the Justice League episode “The Call”. As for his favorite Batman? There was no doubt. “When you think of what Batman looks like, most people think Christian Bale, or Michael Keaton, or Adam West. But when you ask someone what Batman sounds like, it’s always going to be Kevin.” He enjoyed his later work writing for the Thundercats, seeing as it was a show he’d grown up watching, and as he got up to move onto the next roundtable, a fellow writer made him smile, by stating the obvious: although there are many Bruce Waynes and Batmen, “you’re (Will) the only Terry.”

Lauren Tom, prolific voice actor and an effervescent personality, was next, excusing her tea and cold. Being as experienced as she is, she nailed her audition for Terry’s girlfriend, Dana Tan, on her first visit with producer Bruce Timm.

“Some roles just hit right; you show up and just get it.” she recalled, “…although there’s a lot to be said about being around greatness and finding your voice.” Although primarily known for her voice acting work, she’s also known for her work in The Joy Luck Club; during initial rehearsals, director Wayne Wang first paired off the mother/daughter character actors visually, and then asked each actor to which character they each most related.

Some insight into the voice acting world brought some intriguing revelations. In the voice acting world, so far as Ms. Tom noticed, there was no stereotyping, which allowed actors of a variety of races and backgrounds the ability to play any plethora of characters. Neither age, appearance, sex, nor race were factors in deciding which role is right for a voice actor, and her own work speaks to that. Another pleasant side effect of voice acting is, in Ms. Tom’s words, “not one jerk or asshole.” When acting is (primarily) limited to one’s voice, there is no ego to bruise, nor pretenses to keep up; one’s own work speaks for itself. 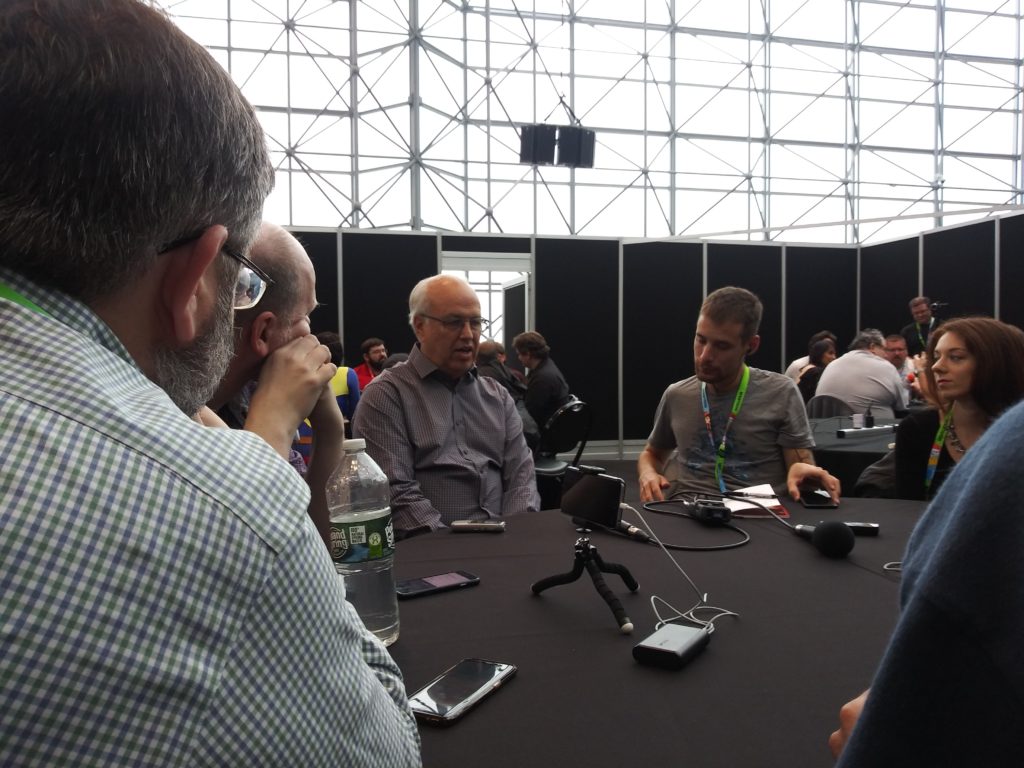 Writer/producer Alan Taylor sat down next, and let loose with perhaps his most crowning achievement on the show: his first episode, “The Eggbaby”, was the first episode in the series to not only be submitted for, but also win, an Emmy award. He gave some insight into the creation of Batman Beyond, having been there from the beginning: initially, the network wanted a sort of “young Batman” cartoon show, one that would follow Bruce Wayne and his younger years (much like what Gotham currently focuses on); but instead the idea evolved into exploring Batman’s future, as a juxtaposition to what audiences would already know and come to expect from the character. This allowed for a freedom in exploring different types of stories and characters that viewers wouldn’t expect otherwise. 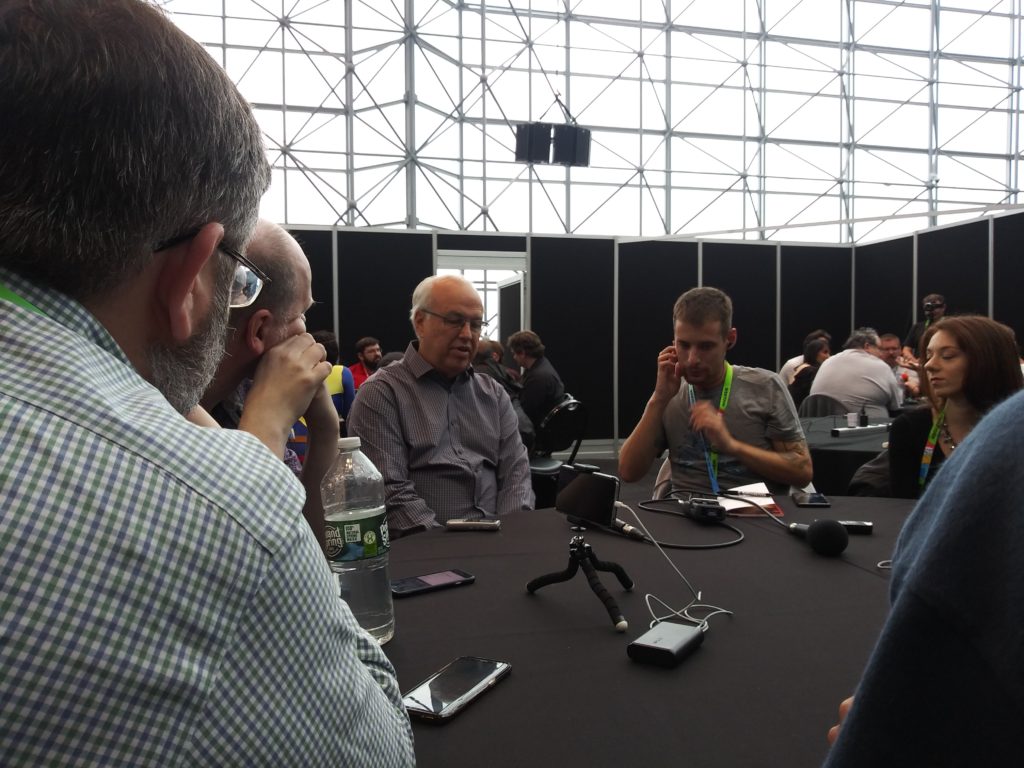 His favorite episode (“The Eggbaby”) was deliberately different in tone from the rest of the show: it was lighter, funnier, and sillier. This deliberate shift came from the network itself, which wanted the show to have Terry focus on “kid problems”. “Superhero shows just don’t get any respect from the Academy. They never have,” he lamented, following a question as to why it took “The Eggbaby” to win an Emmy. The show had to actively become something it absolutely wasn’t, thematically, in order to get the attention it deserved. And yet, despite the shift in tone, there was no show bible to guide writers; they went by sort of image Taylor had in mind when describing the tone: “…a kid, sitting outside, waiting to be part of a samurai group.” Despite the guidance he held on the series, he had no involvement with The Return of the Joker movie, which goes a long way in explaining that film’s darker tone and harsher violence.

The only sort of guide he followed was to never, ever use a dog as a threat in a cartoon; for children to see a dog used in a dangerous, or threatening, position was “too much” as far as Mr. Taylor was concerned. Closing out his time with us, he recalled the creation of some of the rogues gallery for the show. “We took what came before, and just sort of reshaped it. Inque is just Clayface.” he recalled, and closed out by revealing one of the villains was based on a character he’d created when he was 10 years old…the Repulsor! He could’ve gone on for another ten minutes if we’d had the time…

Director James Taylor, director of “The Eggbaby” had been working as a storybaord artist and character designer for five years, on various after-school cartoons, before being promoted to director. Bruce Timm had submitted the episode due, again, to its levity. “The only thing I could think was, if I didn’t win the Emmy,” Taylor recalled, “He’ll (Bruce Timm) will fire me!…and then Batman Beyond was announced…and then heard screaming. And the screaming was coming from me.” 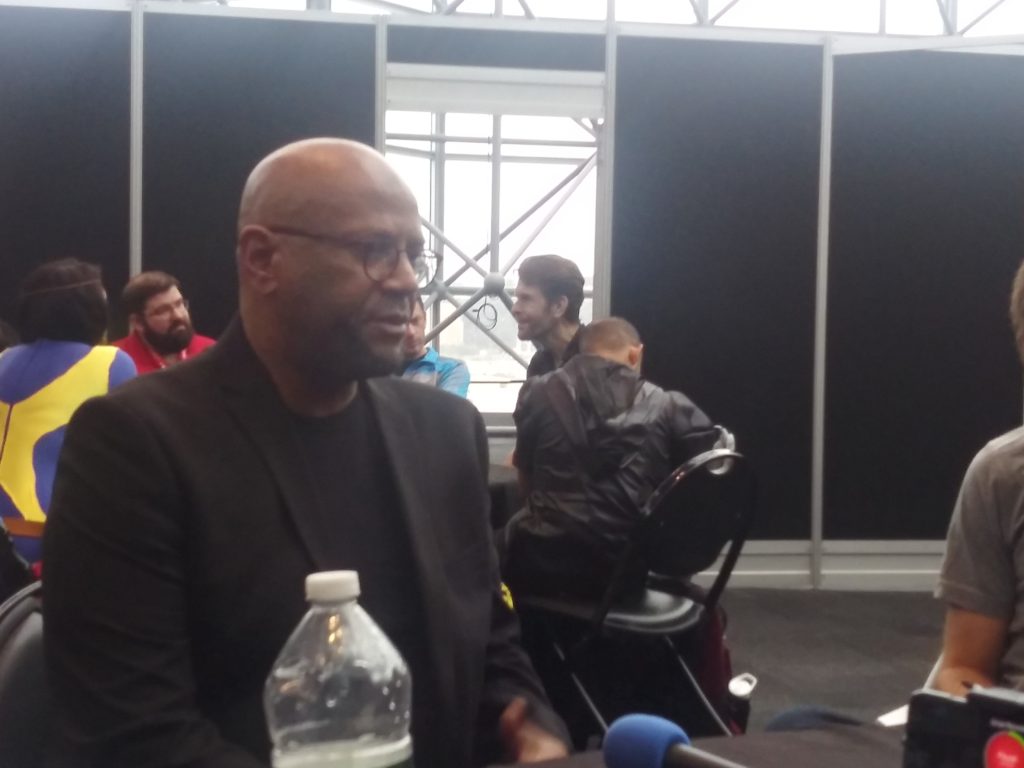 Asked about his interest in directing a live action version of Batman Beyond? Absolutely not. The thought of directing live actors, with massive crews and sets, is intimidating. Interestingly, he was the first to address a curious comparison: Batman Beyond was pitched as a version of Spider-Man…but not (perhaps more appropriately) Spider-Man 2099. Tonally, Terry’s adventures were more akin to Peter Parker than any other DC character. Tucker had nothing but fond memories, and seemed to genuinely enjoy his tenure. 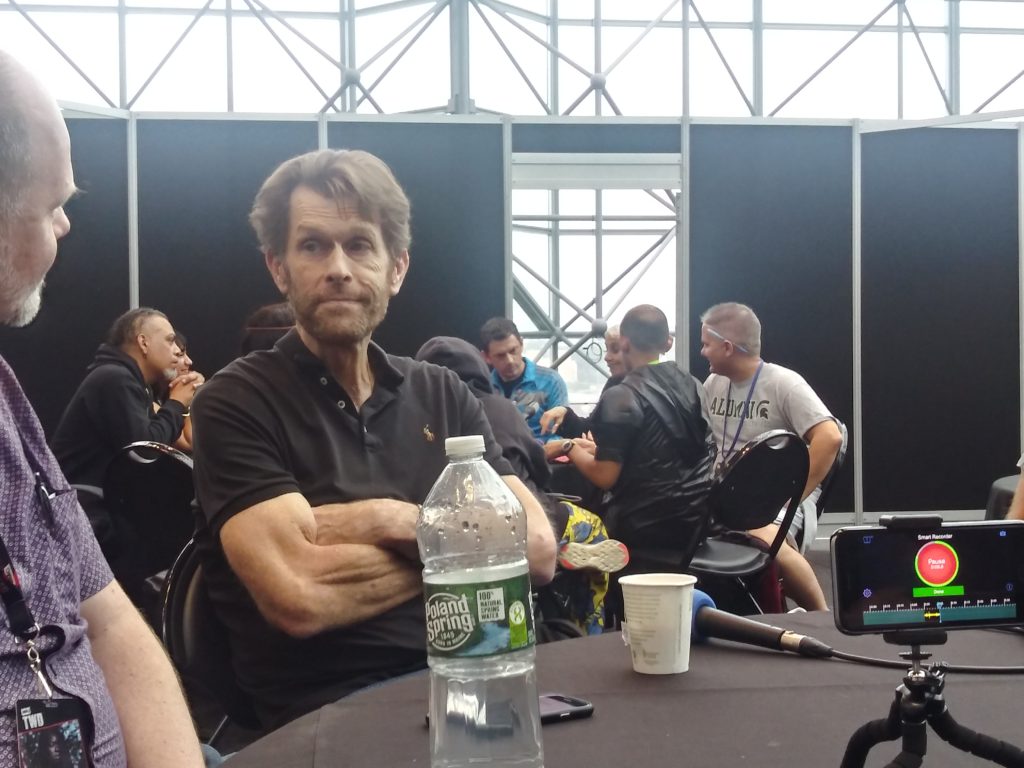 Up next came Batman himself…Kevin Conroy, who bounced around from Batman Beyond to his early years on The Animated Series. He’d flown in the night before, from Vancouver, scruffy and looking a tad jetlagged, having been filming Crisis on Infinite Earths. “Ruby Rose is so great, such a generous actor. The production really is sparing no expense.” Live acting work is more of a return to his early career, having gone to Julliard prior to auditioning for the role of Batman in 1991. He’d only done theater and commercial voiceover work at that time, and was fortuitous to have broken out during a time that networks were looking outside the usual voiceacting talent for their upcoming shows. 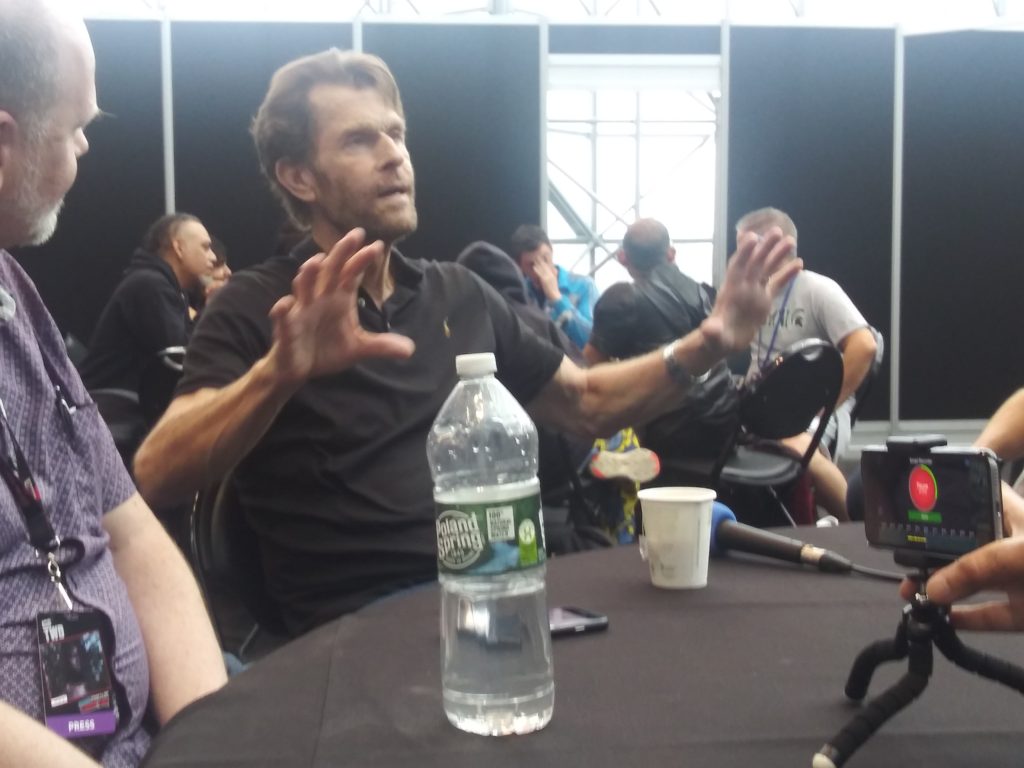 He’d had no preconceptions of the voice, and no idea at what angle the producers were approaching the show, as his only association with the character was through Adam West. “Voice acting IS acting, only you have just your voice to create it.” In time, though, he came to understand Batman as a Shakespearean character. “The hook to the character was Batman was not the disguise. Batman was the disguise. So, when he’s older, Old Bruce Wayne is just his Batman voice, just a bit more gravelly.”

Mr. Conroy was such a vivacious person, and was greatly proud of his work. When asked his favorite acting experience, The Animated Series episode “Perchance To Dream” is top of his list; therein he played 5 different versions of Bruce Wayne/Batman, and revealed that he at first ran through his lines in real time, which proved a feat; he was also the actor to break the ice with his costars, putting them (especially Will Friedle, at the onset) at ease and keeping them from feeling overwhelmed.

While he is excited to see Robert Pattinson take on the role of Batman, “Give it a shot,” of his own time playing the role, he has only this to say, “…it is undeserved. And incredibly awesome.” 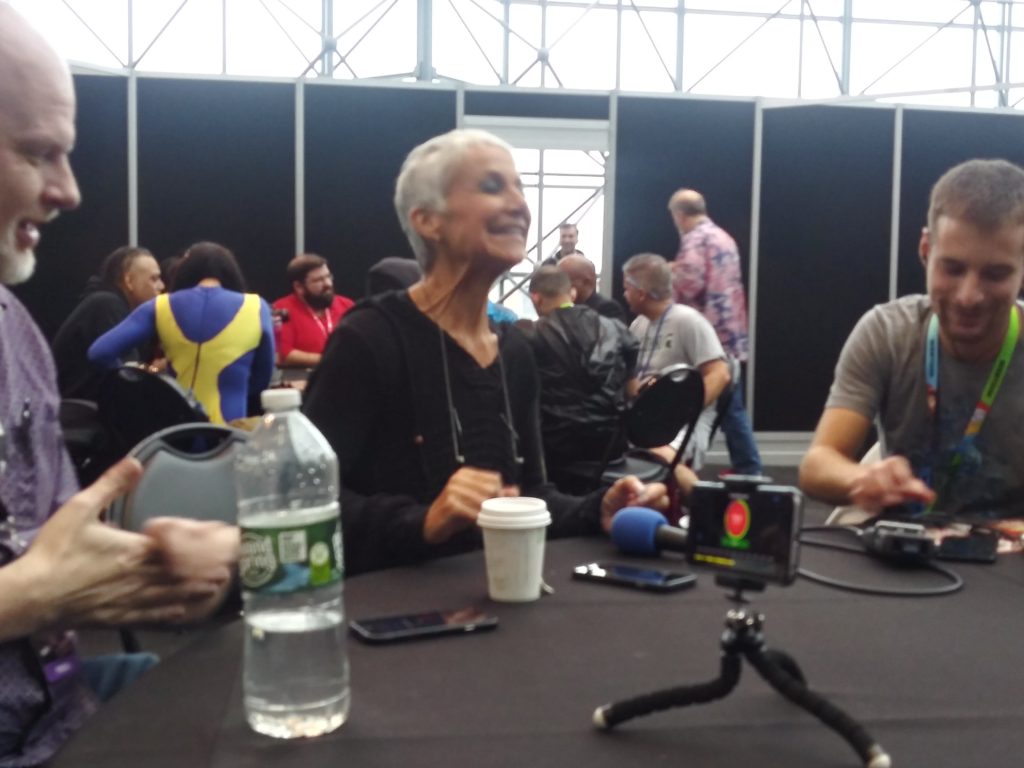 Voice acting director Andrea Romano closed out our experience. “Within five minutes of auditioning, he had the part,” she says of how long it took her to decide on Will for the part of Terry. The process involved auditioning Will on his own, and testing how well he takes direction, and then having him work in conjunction with Kevin, in order to build rapport between the two. 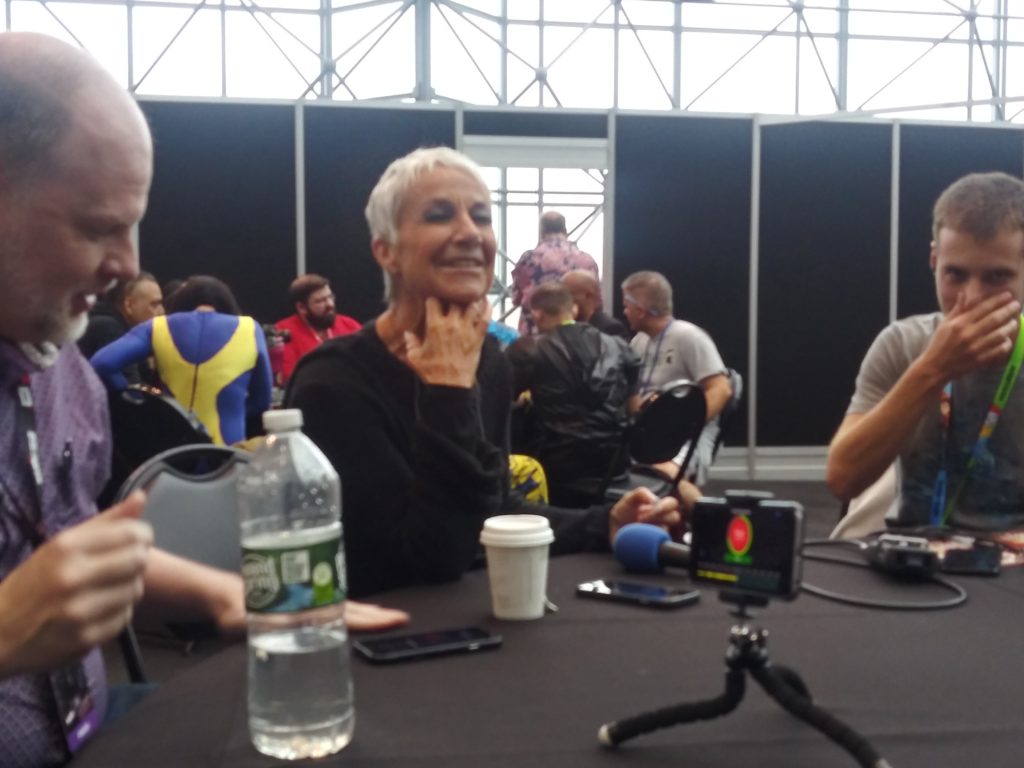 Always, she tries to match character ethnicity to voice actor ethnicity, and views casting voice work as setting up a party. There’s pride inn her work, as she has become one of the go-to casting and voice directors in the business, with agents happily sending actors her way for potential parts (and often send her talent that they’d NEVER give other voice directors).

As it stands, though, Kevin Conroy and Mark Hamill are consistently THE voice actors for the roles of Batman and the Joker, respectively. They are constantly first choice, as they have grown to be, in the ears of the zeitgeist, THE voices for the characters.

Our time winding down, before departing, she was asked what her best experience has been at comic-con. “There are so many nice people, saying how much they love our work.”

For each of the talent, the question of a reunion or revival series was brought up more than once. The answer to that, it seems, lies with the fans. If the 20th anniversary special edition set of Batman Beyond sells well enough, plans might just start forming.