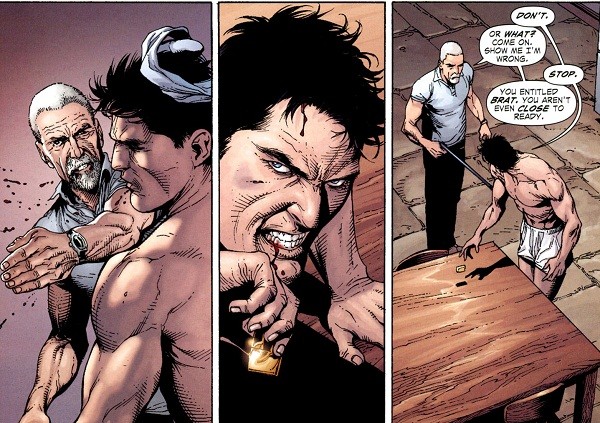 It’s no surprise the name “Michael Caine” is likely to be one of the very first mentioned following any initial take of The Dark Knight Rises. So leave it up to arguably the finest writer at DC Comics in the past decade.. to fuck that all up.

In a good way.

Geoff Johns‘ “Earth One” version of Alfred leaves the intellectual astuteness of the Clark Gable-mustache to the comics, and the eloquent white-haired sensitivity to the film; erstwhile, this alternate universe version of Batman’s butler  “Stephen Langs” his persona like an ol’ war-torn juicebox. Yes, Batman: Earth One is that type of book. Thankfully, most of these deliberate changes to the Batlore don’t change so much to piss anyone off; it’s just that we may not get the QT with certain foes we would have in the 20-page-a-month format.

More importantly, Johns does a great job capturing many of the traits that made Christian Bale’s Dark Knight so good. Not that the Green Lantern and Justice League scribe used Christopher Nolan’s movies as vital references, but this Bat’s battle against his own humanity is tightfully writen. If anything more, Batman goes way in over his head like any vengeful kid who lost his parents to murder would. Gone are traditional, cold calculations of our favorite Detective Comics stories, or the calm-cool nature of Tim Burton’s Bruce Wayne. Johns’ Batman is very much the hothead witnessed in TDKR — only this time lacking the right perspicacity to overcome the most terrible acts of nature, and those of one’s inner-demon.

In other words, Johns will surely have another book or two on the horizon.

More than just make this grizzled, salt-n-pepper goateed Alfred pack the occasional gat, this butler strives to be the father Bruce Wayne never had. Often, Wayne — either through his own inherent riches or sheer luck — has found himself with plenty of father figures to keep his Batmobile rolling. Not in Earth One. Jim Gordon isn’t holding this vigilante’s hand through police procedures (quite the opposite, really); Alfred isn’t chumming to every call and wish; and there’s no Ra’s al Ghul to show him the way of the warrior. No, this Bruce has no other option but to either learn on the run, or earn stripes from this newfound unexpected guardian.. one strike at a time.

Alfred’s tough love definitely shows the further Wayne ventures through Gotham’s dark nights, particularly during a hostile manhunt of one of Geoff’s new creations, The Birthday Boy. If you thought the city couldn’t get any sicker, then you’re sadly mistaken. Funny, though, that none of this updated take on the Batman origin feels like exploitation. The writer could have easily went “sick” for the sake of being so — you ever see his Black Lanterns!?! — but smartly made the Gotham environment of Earth One as freakishly on-par as, say, Rocksteady’s Arkham City.

So there’s no surprise that Johns’ usual Superman-sketch partner is up to the task. Gary Frank has never been known to draw something this dark, and it’s a treat to see what the fan-favorite artist can do with The Batman. If you’ve been reading Justice League, you already know by now Frank’s contributions to the back-up Shazam are a treat, and his take on Clark Kent’s Secret Origin won’t be forgotten. The only problems I have with the guy — and this could be more of the writer’s fault than his — doesn’t pertain to his oft-criticized facial work, actually, but more to his silent panel and splash page overkill. You’re going to pay $23 for a lot of pretty pictures, and barely more than half of them contain text.

But, hey, this is a Batman book, so many might be cool with that.

And since Gary Frank is one of the only artists to nail the Batcowl-with-eyes look, the sparse storytelling is no major issue. The panel-placement is actually quite gorgeous, as pages shift between dual panel-boxes to wide-shots back four-to-five widescreen rows and so-on. This shift helps keep the pages flowing while still remaining wonderful to look at. I’d tell you which other villain of Frank’s delicious macabre design you need to peep for. But I won’t – why take all the fun out of.. wkk, wkk.. finding out who?

Look, while current pull-list customers know what the dream team can handle, if you haven’t picked up comics in decades and feel the urge to purr up on the backyard hammock (to the sounds of Hans Zimmer) and escape into the world of Gotham once again, Batman: Earth One isn’t a bad choice.

That’s if you’re cool with that tough old dude from “Terra Nova” handling some Wayne Mansion dish-duty bidness, of course.