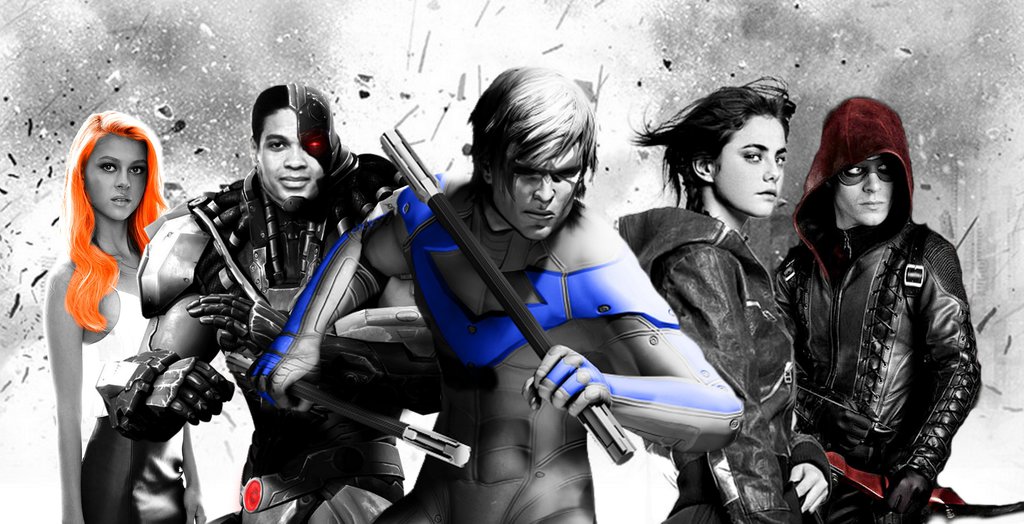 And a wonderful, fine and dandy Saturday morning to you geeks! Ryan “Salvation” Scott here to deliver an FOC that is jam-packed full of some of DC Comics’ (we hope) finest new titles! We are right in the middle of Rebirth and seemingly everyone is getting a new book in the DC stable. So buckle up, geeks–because we’ve got the lowdown on the latest batch.

Batman #1, written by Tom King (Grayson), and with pencils by David Finch (Wonder Woman), offers a quick, action-packed continuation of the Batman saga that had seemed wrapped up with the trio of Batman #51, Batman #52, and DC Universe Rebirth: #1. Here, the Dark Knight must attempt to control a 747 that had been knocked out with a stolen S/A missile, and maneuvers himself atop the plane to steer it the way Paul Muad’dib would a sandworm of Arrakis (No one? No? Fine, he controlled it like a bull-rider for the less nerdy of you out there. Philistines).

The story is thankfully straightforward: no side plots, no need for crossovers or other characters showing up (although the reveal at the end thankfully didn’t delve into the obvious). The ending introduced two new (?) characters worth exploring further, and the issue was action-packed enough to keep the pages turning. The only real downsides? It’s hard to threaten the death of Batman midway through his first issue, and Finch’s artwork lacks any real character or personality (perhaps I’m still spoiled on Greg Capullo’s excellent work the past couple of years), and the result felt drab and workmanlike. But, I’m hooked for the immediate future, to at least see who these two new characters might be. 3.75/5 Sandworms of Dune.

By all accounts, Geoff Johns did his best to leave DC Comics in a good place with Rebirth and fans seem to be responding well enough to it. As with a universe shattering and rebuilding within the confines of a major comic book world, there must be a million title relaunches in order to sort of clean the slate.

That can be daunting and frustrating. At least in one, isolated case though, Titans is a nice book for DC’s Rebirth to hang its hat on. Titans: Rebirth #1 has given a great superhero team a great, and modern jumping-on point within the new DC Comics universe.

The Teen Titans are all grown up now, but they are missing some very important memories, and it is up to Wally West to try and make Donna Troy, Arsenal, Garth, Lilith and Nightwing all remember who he is and more importantly who they are so they can get back to what they do best: kick ass. The book has a purpose, a story and a clear direction and that is all thanks to Dan Abnett (Superman/Batman) who has crafted something really fun for fans of DC’s once teen super team. The art, courtesy of Norm Rapmund (Young Justice) and Brett Booth (Justice League of America), looks like an Avengers book made love to one of the CW DC shows, but it is effective and flows quite nicely. In short, this is another bit of good faith for fans who are bit unsure about this whole Rebirth thing. 4/5 Bibles.

Green Lanterns #1 picks up right where we left our two rookies, Jessica “I’m not afraid, I’m not afraid” Cruz, and Simon “GL get your gun” Baz, attempting to work as a duo of Space Cops here on Earth.

To quickly recap, Hal Jordan has given these two only one power battery to share — so they are forced to team up and work in tandem while they learn the ropes. The rings alert them to a crime already in progress: A man with a shotgun, an eviscerated Red Lantern and a mass grave. Red Lanterns are powered by RAGE. Rage is what seems to be controlling our shotgun wielding murderer as he yells for the ring he says was promised to him. Once the GL’s have the situation in hand, A.R.G.U.S. shows up to take over the scene. When dealing with the Red Lanterns that means Atrocitus is involved. Rage Mobs are popping up on Earth and Simon adds a new weapon to his arsenal — The Emerald Sight !

Sam Humphries (The Legendary Star-Lord) and Robson Rocha (Batman/Superman), with Jay Leisten & Blond, have put together a colorful sci fi/buddy cop action adventure comic. No Hal, Guy, Kyle or Kilowog here, either, which gives these two plenty of space (ha!) to shine and establish themselves in this Rebirth’d DCU. The Red Dawn is coming. 3/5 Poozers.

It’s difficult and possibly impossible for me to be objective about this book because this creative team knocked my lights out so hard over in Batman & Robin by pulling off the seemingly impossible task: not only dd they resurrect Damian Wayne from the horrifying death that Grant Morrison wrote for him in a way that wasn’t cheap (but actually terribly poignant) before going on to do some of the strongest character work with him, that was–at that time–happening in mainstream superhero comics.

Needless to say, I was ecstatic when I found out that they were taking over the reigns of the big guy with this issue, and they certainly did not disappoint. The opening scene features our main character, the post-Crisis Byrne Superman who was DC’s main Earth-1 Superman of record from 1986-2011, paying a visit to the grave of the recently departed New 52 Superman (2011-2016, R.I.P.) and delivering an internal monologue that, after paraphrasing R.E.M., serves as a mission statement letting us know that he’s not going to hide in the shadows anymore.

Then, there’s a two-page splash of him pulling open his shirt to reveal the big S, which is a huge moment due in no small part to the surge of color after the muted palette in the preceding pages through both colorist John Kalisz’s depiction of the cemetery and letterer Rob Leigh’s captions and even paid off through Peter Tomasi’s dialogue. It’s a wonderful moment displaying the synergy of this entire creative team that has been greater than the sum of its parts for long enough that they make all of this glory appear effortless. 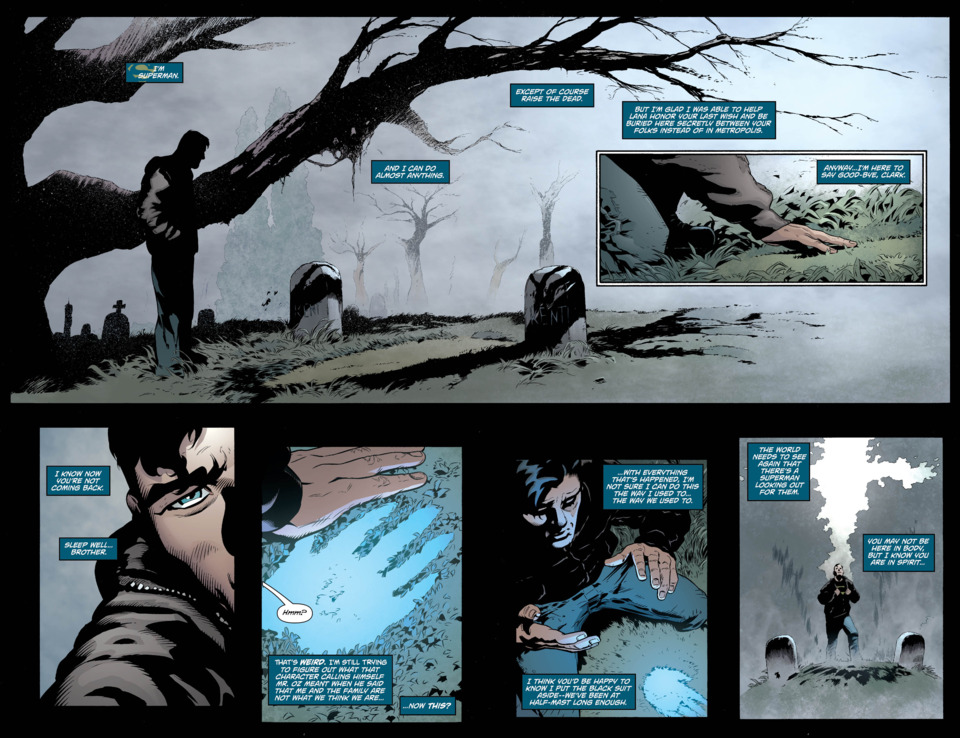 To drive home the point, the next turn of the page brings us another double-page splash of ten panels hearkening back to the first page of Morrison’s All-Star Superman by way of a J.H. Williams’ layout; a no-dialogue origin/manifesto/opening-credits montage all in one breathtaking image that is simply a wonder to behold. We’re almost a third of the way through the issue and have only gotten one scene, but Patrick Gleason and Mick Gray have already turned in such beautiful pages that do so much heavy lifting, you’re already certain that you’re at the start of something special.

The remainder of the issue establishes the family dynamic already familiar to readers of Dan Jurgens’s recent Lois & Clark. The Clark Kent and Lois Lane–who married in the nineties–now have a ten-year-old son who adores his dad, but is still coming to terms with having inherited his powers. This notion comes to a head very quickly in a scene that has unfortunate consequences for the fourth feline member of these Kents, and that also introduces a new supporting player, Kathy Branden, the granddaughter of the fellow who just bought the dairy farm down the way. She only appears in eight panels in this entire issue, but the creative team does a ridiculously efficient job casting her as an interesting foil for Jon, a potential companion who will keep his secrets with no questions asked.

Then, Batman and Wonder Woman show up to have a whispered conversation with our hero and scare the hell out of our hero’s son. This issue is so successful because it puts character first. There aren’t antagonists to punch, and we don’t even notice because it’s so interesting to see the Kents bounce off of one another in this new situation. This is a very impressive debut, made all the more so by the pretty much objective truth that this creative team is just barely getting started. What we have here is the equivalent of them clearing their throat; they haven’t even said a word yet, and it’s already terribly riveting. To be continued, in the best possible way. 5/5 Missing Goldies.

During DC’s New 52 relaunch, they took the Green Arrow title and changed it more into a Daredevil or Batman-stylized rainy noir book.

I imagine this was picked up from cues of the TV show, which borrows heavily from the Batman mythos and applies them to the Emerald Archer instead so they could use familiar themes and even characters. Essentially Oliver’s title became a parody of a parody. Not to say that there weren’t some great stories mixed in there for the archer’s ever-growing fanbase — Lemire and Sorentino’s run was particular favorite of mine out of all of the New 52 Universe to date — but that wasn’t Green Arrow; we have enough of these characters.

And along comes Rebirth; a change of many themes across the DCU back to make them fall more in line with what fans expect when they pick up a title. Oliver was never meant to be DC’s pulp noir hero, those stories are better left to the Batman family and a few others. He is meant to be our hardheaded-yet-charming, swashbuckling hero, filling a particular void in DC’s street level hero mix. Along with this change comes our new creative team, Benjamin Percy and Otto Schmidt. Do those sound familiar? To me they didn’t, as both are relative unknowns in comics but ones that will likely soon be household names; Percy with his bread and a butter as a novelist has only done a couple issues of Detective that I could find clearly knows how to pace a story, and Otto Schmidt a Moscow-based artist known for a whimsical and soft pinup style art might be one of the best new faces in western comics. I absolutely love it. 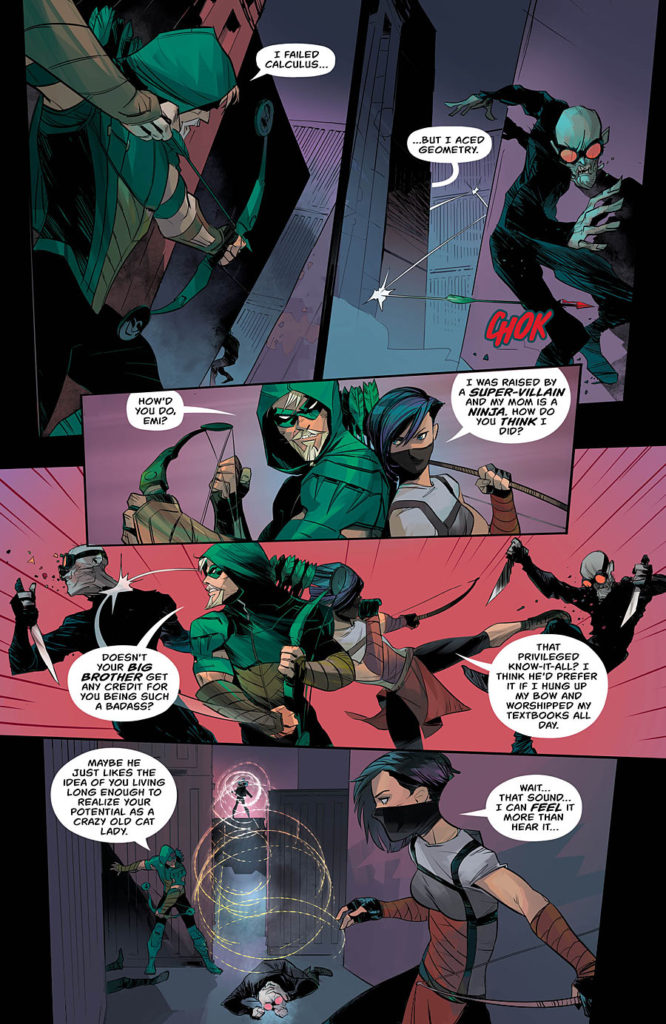 It’s clear directly from the two covers of issue #1 that this is an action book. No matter which cover you grabbed: The Juan Ferreyra with large depictions of Oliver’s classic look, alongside Black Canary and the rest of his cast, letting you know this book is getting back on track with familiar themes and relationships that are wholly their own; with a smaller scene of GA surrounded on a rooftop, kicking a hockey-mast wearing thug in the face (funny, because Stephen Amell plays Casey Jones in the newest TMNT flick) while blowing an arrow through another’s weapon hand with his gun flipping harmlessly free of his grasp. Another man hunches over the ledge of the building having an arrow through pierces clear through his shoulder while two more foolish goons looking on are clearly next on the list.  Or the secondary Neil Adams cover in which Ollie leaps out of the page at the reader like a classic Jack Kirby drawing.

Once you open one of those covers, you’ll find this book hits all the actions beats you would expect and it doesn’t stop there — not to be cliche, but this is an issue that literally has everything in it. It sets up several characters relationships with each-other, and does a ton of world building, and is loaded with action, sex, comedy, quality dialogue, intrigue, betrayal and also action.  I don’t think there is a wasted panel in this book, leading to perhaps as good of a jumping-on point for a new title as you’re going to find. 4/5 Bibles.