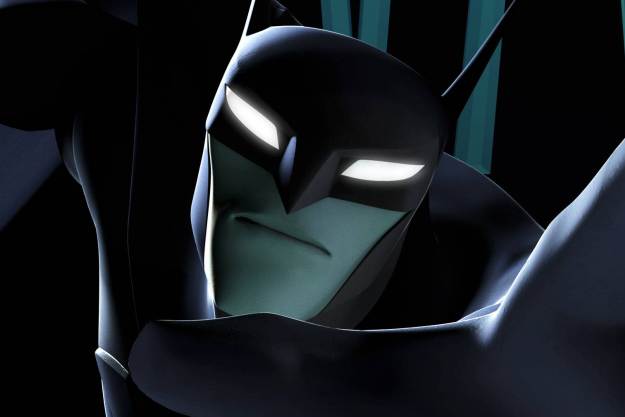 This weekend, the Cartoon Network finally unleashed its long-awaited Saturday morning Batman fix to the masses. So, Beware the Batman, for there is enough to discuss, a lot to dread, and some to smile about with this latest in Caped Crusader cartoon.

What I’m most proud of with “Beware” is the supporting cast, and its choice of actors. The guy who did Johnny Bravo and a million other voices is Simon Stagg, Brian George (Babu Bhatt from “Seinfeld”) is Professor Pyg, Udo Kier (from every single nightmare you’ve ever had, plus a million other movies) is Mr. Toad, Kurtwood Smith (Bitches leave from Robocop) is Jim Gordon — which is just fantastic casting — and Gary Anthony Williams (Uncle Ruckus from “The Boondocks”) is Michael Holt. Lots of awesome vocal talent right there, and, clearly, the best thing about this show.

The second best thing? It reminds me of this video I caught on a Playstation Magazine DVD about 15-years ago…

So cool — and therein lies the problem: Despite the CG display, “Beware the Batman” looks as if it were about 10-years behind current animation. An article I read earlier this week *cough EW cough* about “Beware” had the audacity to compare it to “The Clone Wars”! How people will judge things off a 2-minute and 30-second clip…

“Clone Wars” felt vibrant. It felt alive. It felt like something that could at one moment terrify you and the next could entice you with its sheer wonder. The animation in “Beware,” rather, felt like watching your kid brother slam two action figures together, smash them through a Lego wall, and then throw them in your face for X-TREMENESS!!!!

The difference, I suppose then, is the viewers. “Clone Wars” was as much for kids as it was for us curmudgeonly old Star Wars fans who know Han shot first and Ewoks don’t blink and Sebastian Shaw is the true Ghost-Anakin at the end of Return of the Jedi. “Beware the Batman” seems to be aimed solely at kids (despite the use of a lot of uniquely violent Grant Morrison-created villains), and that’s fine.

That’s not the big deal at hand, really.

You’ve got to feel for anything that has the stones to come out in the shadow of the incredible “Young Justice”, the amazing “Batman: The Brave and the Bold”, countless animated Batman films (like Under the Red Hood, Year One, Dark Knight Returns, and so many others), not to mention “Batman Beyond” and The Original and Best Animated Series of All-Time. Even with the highest benefit of the doubt, “Beware the Batman” struggles to find footing in my heart.

I LIVED for “Batman: The Animated Series”. Kevin Conroy’s voice is the voice I hear whenever I see Batman, whether in toy, statue, video game or animated or live action form. It doesn’t matter, they all sound like Kevin Conroy to me.

Diedrich Bader (“Brave and the Bold”) did a great job playing Batman because he didn’t mimic or attempt to play the gravelly Kevin Conroy type. Rico Romano (“The Batman!”) struggled because he didn’t sound like Batman at all. Anthony Ruivivar is trying to play a mix between Conroy and Christian Bale, but it falls flat; his voice has no depth or range, as it’s just one constant pitch/tone. That’s something Conroy and Bale both got. Bruce Wayne and Batman have different voices. That’s something that Romano and Ruivivar don’t seem to do. There’s no difference in the voice. It’s one gravelly voice, and that’s all she wrote.

Again, back to the animation itself. Old. Crusty. Lifeless. “Beware” just didn’t feel vibrant, nor alive. I had the same problem with the “Green Lantern” animated series from about a year ago. When you have incredible animation on shows like “Young Justice” (or hell, that Wonder Woman DC Nation short that was just all kinds of kick-ass awesomeness), it’s a near slap in the face to put it against flat, 3D -characters. Everything just felt like dead-eyed dolls being played with. Give me traditional animation, or give me Pixar style characters.

Now to the positives — The Few and The Far: the Jason Statham/Ray Winstone/Mark Strong-styled Alfred was weird, but in a good way. Seeing Alfred attack Bruce with a baseball bat while he was catching some Z’s was tight. After spending 7 movies with a decrepit old Alfred who talked a big game but didn’t do shit and an animated series Alfred or two who was great but barely had anything to do and an Alfred in the comics who was a quiet badass, it was both strange and awesome to see a younger, bigger, balder and badassier Alfred.

It was also nice to see the touches of characters that are most likely new to the younger audence watching the show. Gary Anthony Williams as Michael Holt is great, because Mr. Holt is Mister Terrific from the most recent New 52 and JSA. Sumalee Montano as Tatsu Yamashiro is awesome, because that’s Katana, a sword-wielding badass from Batman and the Outsiders, Birds of Prey, Justice League of America and her own current series.

Big year for this gal.

Regardless of all the team’s earned points of originality, Batman’s latest animated series just didn’t hold my attention long enough. The drab presentation is sadly, completely overshadowed by all the greatness that came before; thus, it feels like the show is already going to fall by the wayside, much like “The Batman!” series from 2004 managed to disappear.

And with that, my superhero cartoon-loving friends… Beware.