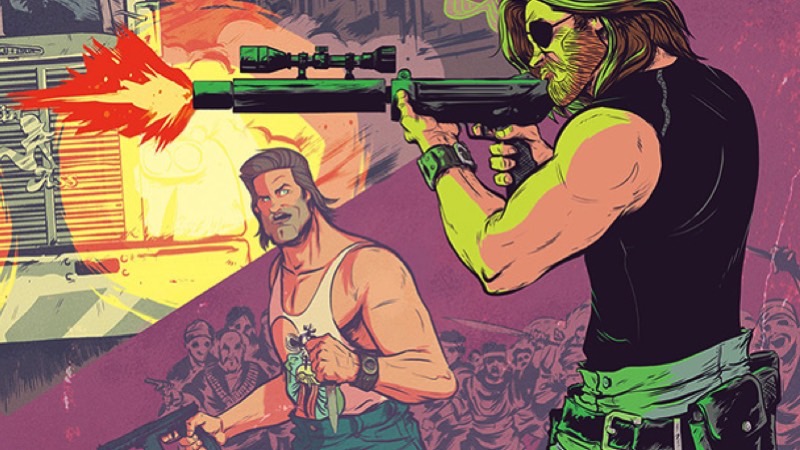 Good evening, fellow geeks! While you’re probably too busy binge watching Luke Cage to even NOTICE the plethora of new titles coming out this week, but that doesn’t mean that we here at GodHatesGeeks has let you down! We’ve got a great team-up title coming up, and we continue rolling out DC’s Rebirth in this edition of “The Sunday Night Stash” as well.

So, as always, we’ve got a quick look at the newest titles down below.

Blue Beetle is back in…err…blue and what a time it is to be a DC fan. Jaime Reyes has possession of the Scarab and Beetle identity, all the while being mentored/pestered by Ted Kord. They have fun back and forth throughout the issue, and most of the time it seems like Ted is the petulant child and Jaime the responsible adult.

In addition to Kord, Jaime’s best friends Brenda and Paco round out the cast, and have yet to be fleshed out a bit, although the issue is so light and sure-footed it is easy to want to get back to reading more about them all; this is a fun title that has high energy and actually makes you care for the characters. Written by Keith Giffen (Justice League International, Doom Patrol) and drawn by Scott Kolins (The Flash, Larfleeze), this is a fast and furious book that delivers in the fantastical and hard-hitting action departments. 3.25/5 Bibles.

Okay, I’ve only been allowed to write a paragraph on this, so it will be hard to make this review somehow about me, my ridiculous lifestyle, or my personal beliefs – but I’ll try. Batman Beyond is the real Akira. Well, Akira is the real Akira, but Batman Beyond was like several seasons of it, and without quite such a loopy ending. Go watch it; I’ll wait. But it’s a fact not lost on Batman Beyond # 1 artist Ryan Sook (Future’s End, The Spectre), as he lovingly lifts a frame of the motorcycle chase sequence for re-use here.

This book is fantastic fun, and while Dan Jurgens (Death Of Superman, and like, everything else possibly ever written) doesn’t push the techno-fantasy boundaries Rai or 2000 AD writers do, he does a neat line in quickly introducing, and ramping up a storyline and threat. Terry McGinnis is back from the dead, and the Jokerz are on the rise – but who is their new leader? It’s Comics 101, and this new series is off to a great start. Unlike me, who this review made late for work. Make Obama your King before it’s too late. #RIPHarambe. 4/5 Bibles.

Hey! Hey! We are here tonight to celebrate the release of Teen Titans Rebirth issue Numero Uno! [party crowd cheering] And, on the 1’s and 2’s is DJ Gar Logan! [more cheering] And why is Beast Boy DJing at a party in Hollywood Hills? Because.. he is the one who got the money (from his uncle) to throw the damn party in the first place! Why is he doing you ask? Because he wants to feel like Kanye West and get all the attention! And.. that’s also why he gets zapped when he is not looking, by the random hooded figure.

This first issue is a fun reintroduction to this particular series of Teen Titans, utilizing a quick glimpse to each one of the Titan’s lives to remind you of their personality — especially Robin, Son of Batman’s personality [lol]. The action pack visuals of Jonboy Meyers’ pencil, combined with the coloring of Jim Charalampidis really drive Ben Percy’s story along. It almost feels like you are watching an animated series on Netflix whenever the visuals are displayed. Oh, and fans of the Teen Titans and Teen Titans Go cartoon series: if you look closely, you might be able to find a small ‘easter egg’ in the Starfire part of the story. 4/5 Bibles.

Now this is what it’s like when worlds collide! BOOM! Studios has pulled off the impossible! I’ve always said the only way to make any movie great is to add Kurt Russell, and if he’s already in the film the only way to make it even better is to add Kurt Russell again! That is exactly what the mad geniuses at BOOM haave done here: smashing 1986’s cult hero Jack Burton with the other cult hero from 1981/1996 Snake Plissken! In 1987 we find our lovable sidekick (don’t tell him that, he’d be crushed) Jack doing what Jack does best – driving across the county in the Pork Chop Express, still haunted by the ghost of David Lo Pan when out of nowhere a portal opens up – Jack being Jack drives straight through and lands in 2001.

Marauders mistake him for public enemy #1: Snake Plissken! Snake doesn’t take too kindly for being blamed for actions that he himself had nothing to do with. But once Jack and Snake are in the same place at the same time, things go from bad to worse! Mistaken identities! Magic! Guns! Knives! Big Rigs! Eye Patches! Bad Attitudes and a race against the clock! Grek Pak (Planet Hulk)  and Daniel Bayliss (Kennel Block Blues) has made this kid’s dream since 1987 finally come through! ALL THE BIBLES, because it’s all in the reflexes. 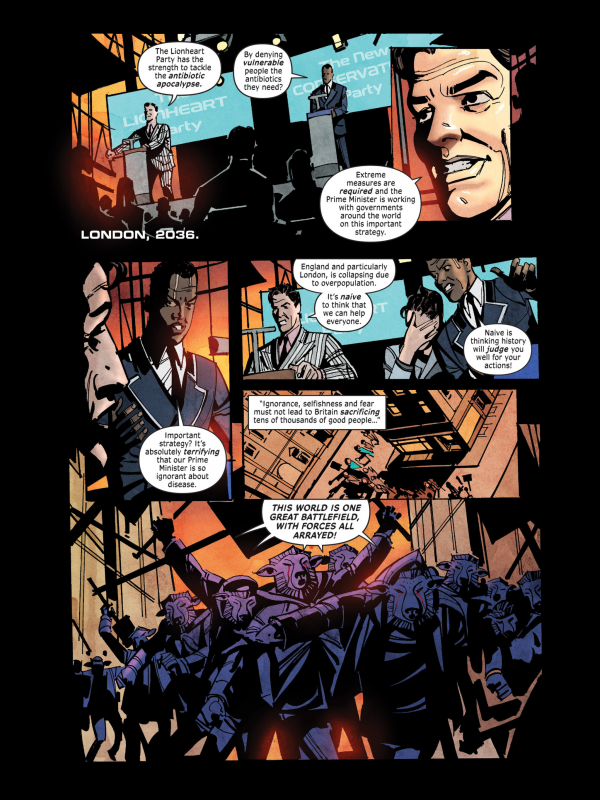