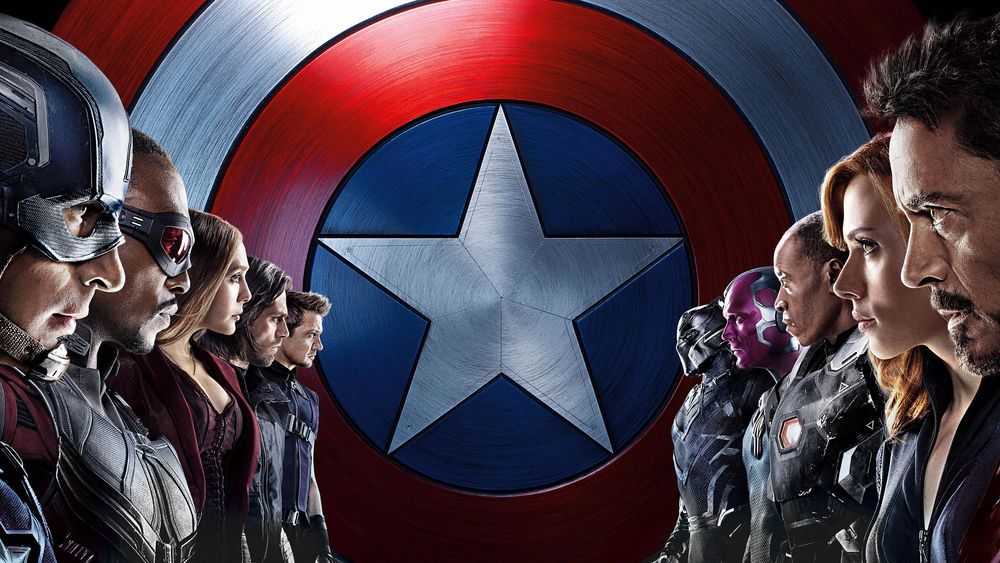 More so than any other superhero film, Marvel or DC, Captain America: Civil War humanizes the very heroes we have relied on to save the day. By equal parts prosecution and praise, Civil War demands that our heroes be held responsible for the destruction they’ve caused around the world. 8 years and 13 films — and a little over a month after DC’s darker-yet-similar mega-titan battle (which failed to land, in this Apostle’s eyes mind you) — only seemed all the more fitting…

As part Captain America triplet, part “Avengers 2.5“, Anthony and Joe Russo (the forthcoming Avengers: Infinity War I and II) have absolutely outdone themselves with Civil War. Is it perfect? Nearly. To start off, Civil War is a Captain America sequel by mostly name only; it’s an Avenger film through and through, as screentime between the all mighty Steve Rogers (Chris Evans) and Tony Stark (Robert Downey Jr.) is shared pretty equally. So, head into your local theater looking at this more as a Marvel Mashup of Cap 3/Iron Man 4/apology for Avengers: Age of Ultron.

As a character piece, this film truly puts our favorite bromance through the ringer. Both Steve and Tony are stuck between a rock and hard place. Though on opposite sides of the line throughout the entire film, it’s great to see that their shared brother-in-arms bond finally gets its screen-time due. Both are torn between loyalty for their friends and family and their morals, a path of course led by the previous 12 flicks. Tony is still reeling from the Ultron creation/discovery/failure, and the death of so many in Sokovia that wicked mech-monster had caused. The governments of the world were now at the belief that these “heroes” need checks and balances. Steve is on the opposite spectrum, since he’s seen what a government can do with absolute power during WWII and the fall of S.H.I.E.L.D. The catalyst, though, is when James “Bucky” Barnes (a much more expressive Sebastian Stan, a.k.a. “The Winter Soldier”) is accused of mass genocide, and a KOS is put in place by the same authorities that want to monitor the Powers.

On a spectrum of Marvel movies, rest assured this is better than Age of Ultron by leaps and swings! While the last Avengers outing seemed more like a first act, Civil War is 100% a complete film — even tying up loose ends dating back from the first Iron Man. Like most Marvel movies, a bigger end-game is planned and built; but, unlike that of AoU or even Captain America: The Winter Soldier, anything teased is delivered (i.e. previous, mere mentions of Doc Strange or Black Panther). Enough to drop our nerd panties, this outing will remind you of just how much of a powerhouse Marvel is on the creation and execution. CW not only gives us a Black Panther (a calculatingly warm Chadwick Boseman) that truly owns the character and leaves you wanting more, but also the most comic-accurate Spider-Man (In the Heart of the Sea‘s Tom Holland) we have ever seen.

Very rarely does a trailer break the internet faster than Kim Kardashian’s latest “leaked” nudie, but the first glimpse of Marvel’s take on Spidey had us nerds biting at the bit for anything more. How much is the Web-Crawler in the film? Was he #TeamCap or #TeamIronMan? Will Holland be any good? Rest assured, nerds, he is awesome in Civil War and one of its finest highlights. Tom’s take on Peter and Spidey is the closest we have ever seen to the comics. He’s snarkier, funnier, and more accurate than Andrew Garfield or Tobey Maguire ever were. He has one-hitters for every scene, especially in scenes between him and Tony. Also, the detail put into the new costume and web-shooters really works on screen, leaving you on the edge of your seat for Spider-Man: Homecoming.

Boseman’s T’Challa is also an added bonus, having a bigger role than you may expect. The Panther arrives as a fully-formed character — in the flesh! — with very little exposition needed. Not surprising for a guy who played the first black baseball player, Boseman plays the first black superhero with regal grace and forceful determination. A true comic-to-film adaptation, Black Panther is encased in a vibranium suit with a set of razor-sharp claws that are even a match for Cap’s shield. To quote the Falcon, “Dude shows up dressed like a cat and you don’t want to know more?” By the end of Civil you will fully understand why this character is deserving of his own film.

As for the rest of the characters: Bucky is a less brain-washed “Manchurian Candidate”, and more tortured soul this go around. Though he does come off as a MacGuffin at times, you do buy the lifelong friendship Cap and Bucky have due to the actors’ performances (Note: Watching Captain America: First Avenger is essential for the plot’s total gravitas, however). Ant-Man (some guy named Paul Rudd) delivers in gigantic ways, a highlight for the film alread sorta ruined by LEGO. The rest of the gang all have their purpose and character development, although none more than Sam Wilson (Anthony Mackie). Unlike the Falcon’s three previous appearances, he delivers great one-liners, shows his wings are needed, with an addition of a Next-Gen Redwing that is just awesome.

On the aspect of evil additions to Civil War, both Crossbones and Baron Zemo play their parts. Frank Grillo (Warrior) returns as a more fitting Crossbones and replaces Nitro in the comic-to-film storyline, likely since Brock’s origin was previously seen in The Winter Soldier. Either way, Grillo delivers an admirable performance of a villain you want to see more of (how cool would Crossbones vs. John Bernthal’s Punisher be?). This film’s “Lex Luthor” is Helmet Zemo, played by Daniel Bruhl (Rush), as the master manipulator pulling all the strings. Unfortunately to this Traveling Nerd, Zemo never really excels as a villain or main antagonist. In no fault of Bruhl’s performance, but Zemo is underused properly and is resorted to more B-list villain without any development to become a chief theat.

The biggest issue with this new Marvel masterpiece is the lack of a single overarching plot. At times, Civil War‘s momentous scenes were glued together more for the use of selling toys and trailer hype. Don’t get me wrong; both the airport scene and final battle between Cap and Iron Man will go down as the best fight scenes ever in Marvel cinematic history. Although these sweepingly epic battles sometimes feel like a separate movie in itself, just watching the new “Spectacular” Spider-Man swing around and piss off the entire Team Cap–and get on the nerves of Cap himself–is enough to bring smiles to even the angriest of nerds. Also the final fight is intense, with both Evans and Downey Jr. giving as much as they can and leaving neither unbroken in the process.

Go see Captain America: Civil War — if for nothing else, to make up for what you wanted Batman V Superman to be. Does it have a few issues? Yeah, but watching all of your dream match-ups come to fruition (Hawkeye vs. Black Widow! Ant-Man vs. Vision! Black Panther vs. Bucky! Scarlet Witch vs. Fox Studios!) is enough to rank it among the best Marvel films–if not the best. Also like anything coming from Marvel Studios, stay for the two post-credits. Neither are as earth-shattering as you would expect, but they do help build characters who need building.