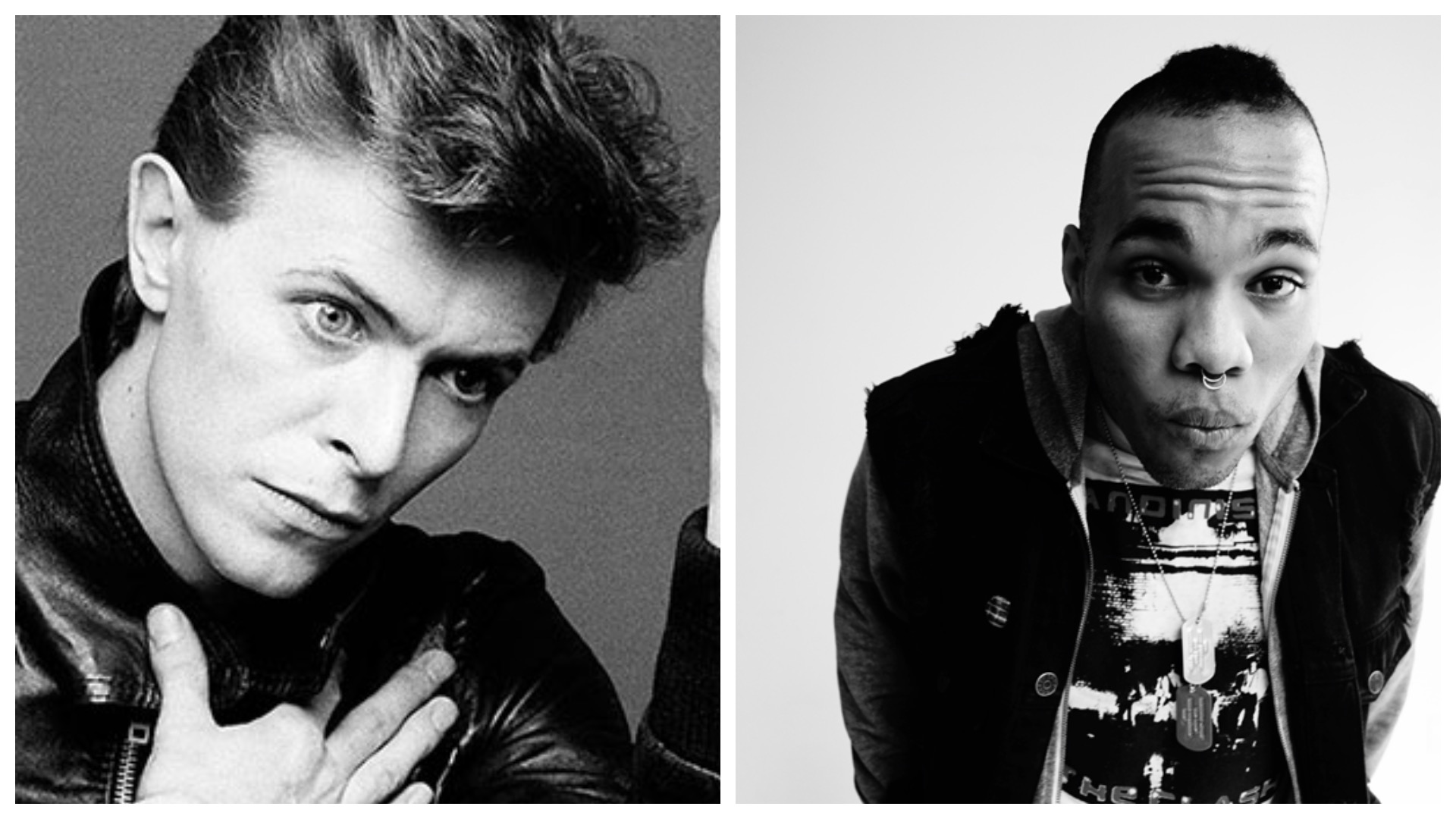 You’ve witnessed it; you’ve requested it; and, now, you’ve got it…

GHG‘s #GeekSwag Music Reviews are back! And we not even just doin’ hip-hop this time. Nope. No-no-no. Not when you’ve got a legend to remember. A lot of hip-hop hits have come from the music of Sir David Bowie; so it only makes sense to review his last and #1 hit album, Blackstar, posthumously. Also for the first time ever, Monsignor Moody is joined by other GHG staffers — J.L. Caraballo, Myke Ladiona, Ryan Scott, and Dana Keels — in a “Fistful of Comics”-style mini-review smash.

Crank the music, mothastunners. Cause it’s on.

David Bowie‘s Blackstar, released a few days prior to his death, serves as a perfect epitaph to the artist. While running only seven tracks, and barely over 41-minutes in length, Bowie condenses most of his most personal themes (mainly of death, rebirth, and mortality) into an album that generally plays better from beginning to end, rather than as individual singles.

That being said, two tracks stand out. “Lazarus” — which was released, along with its music video, a mere four days before his death — opens with the lines “Look up here/ I’m in heaven/ I’ve got scars that can’t be seen/ I’ve got drama, can’t be stolen/ Everybody knows me now”, and is the most prescient song on the album, serving almost as a farewell (and confession) to his fans. The accompanying music video is likewise full of imagery such as coffins, hospital beds, and Bowie wearing a death-mask…

My favorite track, though, is “Dollar Days”, which seems to acknowledge his regrets and past rock-star life, and the lifestyle and influence he’d enjoyed. The song ends with Bowie repeating the line “I’m dying to/ I’m dying to/ I’m dying to”…knowing it would be the last album he’d ever make, it brings a chill to the spine. The only downside is that I wish this album were longer…but that we got it at all is a gift.

There is a reason this is his first album to hit #1 on the Billboard 200 in the States. This goodbye is definitely worth a purchase. 4.75/5 Bibles.

Odds are, you’ve probably never heard of Anderson .Paak (pushes hipster glasses back). Featured on six tracks from Dr. Dre’s Compton: The Soundtrack, .Paak is a voice that might not sound too familiar unless you had that album; but come the end of the year, it might very well just be a staple.

Malibu is the second album from the Oxnard native, a near perfect blend of hip-hop, R&B, rock and soul. Similar to other acts such as “The Social Experiment”, .Paak is in a lane of his own, and the result is an LP full of hot jams…

Kudos to Malibu for bringing back the complete album feeling thats been absent from many LP’s, which harkens back to last year’s To Pimp A Butterfly in terms of feeling seamless and complete. From the uber mellow jazz lounge feeling of album opener “The Bird”, one can feel the soul radiating behind the music. He has a story to tell and it’s familiarly intimate. Guests range from BJ The Chicago Kid on “The Waters” to hot female emcee Rapsody on “Without You” to even a less-gangsta-than-usual Game on one of the album’s stand out tracks “Room in Here”. And if you aren’t nodding your head by the time you reach funk-infused “Come Down”, then you might want to check for a pulse.

Malibu is a triumph as a sophomore effort, but will it equate to a rise of another music legend in the making? Time will only tell. But this artists’ future is as bright as the Cali sun. 4/5 Lowriders.

MURS decided to team up with 9th Wonder and drop a surprise album on Soundcloud in the waning moments of 2015 — and, truthfully, the pair may have dropped one of the best hip-hop albums of the entire year right at the buzzer. As a lower middle class white kid (now white man, mind you), it was always a bit odd listening to hip-hop because, frankly, most of the music isn’t something that I am meant to relate to. While “[Good] music is [good] music and it’s all good” (shout to Common), I’ve always been picky about my hip-hop, having always had a soft spot for what a lot of people would probably call “pure” hip-hop like A Tribe Called Quest, Atmosphere, etc.

Brighter Daze is exactly that.

Hot names such as Mac Miller and Rapsody (again! see above review) do guest spots, but production duties are handled exclusively by former Little Brother backbone 9th Wonder. Yet while all great HH needs guests, much like a burger needs french fries and those fries need ketchup, the burger is the reason you go to get food in the first place–and the same can be said for MURS on this EP, who may have even outdid his stellar Have A Nice Life LP from earlier last year. “The Battle” sets up the album perfectly; but “Get Naked” may be the most sticky track on the album, even if it isn’t the most impactful or meaningful. A personal favorite line of mine comes from the song “Lover MURS” though, which goes “I don’t even wanna fuck; I just wanna make out.”

If you are looking for something to prove how much bass you can pump through the subwoofer in your trunk, look elsewhere. However, if you want something pure that lives up to the MURS acronym — “Making Underground Raw Shit” — then this is absolutely for you. 4/5 9th Bibles.

For better or worse, that “boom-bap” late-80s/early-90s Queens hip-hop sound is alive and well in Consequence’s new 2016 release. A Good Comeback Story features a healthy amount of that timeless sound that his cousin Q-Tip’s legendary group, A Tribe Called Quest, helped originate, but is slightly weighed by a few songs that fall short and are more dated than classic.

Cons’ second full length album (read: not mixtape) puts its foot on the floor early with two strong entries: “Every Night” (feat. Ryan Leslie) and “That Dude”, with the former throwing back that old 70’s soul sound in the best way possible; it also exemplifies the best usage of that funk/jazz/blues fusion instrumental sound that Tribe brought to the forefront in 1985. “That Dude” continues the tradition and adds a little personality with the touch of his son Caiden, highlighting the rapper’s more charming creative decisions…

On the other end, “Make Believe” (feat. Kam Corvet) and “No Matter What” (feat Q-Tip) are only as good as the listener’s nostalgia will let them be as both tracks suffer from an odd dogmatic adherence to the more mediocre “filler” from the time-period it’s aping. Fortunately, Comeback Story, ends on some fresh notes from “Countdown” (feat. Lupe Fiasco & Chris Turner to “Battle Anybody” — two songs that are as strong as any of Tribe’s deep-cuts, while “The People Saying” pleasantly recalls “College Dropout”-era Kanye production values.

On the rebirth of #GeekSwag, it only seems right I’d be covering a Ras Kass album (or, in this case, EP), seeing how he’s in my Top 3 all-time, and one of the chief reasons I love this hip-hop music in the first place. 20-years after Ras took the hip-hop industry by storm with Soul On Ice (FUCK Relativity; but WE wrekonize!), the lyrical legend is still doin’ the damn thing as the genre’s near-perfect mesh between geek and street.

His latest goodie, Lyrical Hip-Hop is Dead, is both a play on Nas’ old statement and a shout to Canadian DC/Producer extraordinaire Kaytranada‘s instrumental album of nearly the same name. Ras flips and fine-tunes much of the experimental beats, which chiefly contain Eastern strings, Capcom-inspired keys, smooth drum tacks and grainy backdrops. It captures much of the same magic as last year’s collabo with Jack Splash on Semi-Hendrix, or an also near throwback to the Waterproof’s “Won’t Catch Me Runnin'” and some of Ras’ smoother outputs in the mid-2000s (Run Away Slave, Revenge of the Spit).

Never one to hold back, Razzy goes at a famous Jell-O Pudding Popper who faces criminal charges on the opening smooth ride-out, “The Chase,” which incorporates a dope Evidence vocal sample. “Bill Cosby talks bad about niggas, how we sag our jeans/ But Cliff Huxtable been druggin’ and rapin’ since the 70s.” Other highlights include a set of John Blaze bars from Kazzy’s son, Ras Austin, on “Narcos” and the Geek Love of “Keypad,” which blends two of Ras’ favorite lyrical topics, sex and technology; while “Attitudes” (with PRhyme’s Royce da 5’9″) would have been better left not remixed, and the Kaytranada samples on “Human Dog Fight (Remix)” could have used a snare. Still, this project ensures that Ras Kass is right up there with MURS as one of the most prolific emcees coming out Left. 3.5/5 Mics.