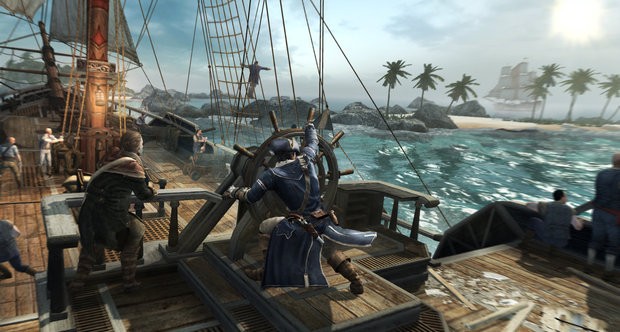 God Hates Geeks is back, at least for this evening.

And just in time for October, the most anticipated month of yours truly of the year. Not because it’s the setting for redundant costumes like Mitt Romney, scab NFL referees or, well, obviously, Bane.

But, rather, October sees the likes of sweet fall shows like “Dexter”, “Homeland” (the show everyone goin’ cray for now), and “Arrow” (doubt the execution will ever live up to the idea, but cool); hot comics like MarvelNOW (come see us next Thursday, kiddies) and lucky number Batman #13 (a.k.a. the return of the Joker!); and the most anticipated games of the season like Assassin’s Creed III (naval battle…I said…NAVAL BATTLE), Resident Evil 6 (Gary to the REScue!), NBA 2K13 (wanting this more than cats want sex), WWE 13 (obv), and Lego Lord of the Rings (don’t hate!).

Whew — tis going to be one hectic month!

So, with all that smoke blown in the faces of fiendish fangirls and fanboys all over GHG-land, we have no choice but to perform for our entire lovely congregation. And lest we forget…

Oh yeah. We’re bummed. But would you rather go to NYCC or Austin City Limits!?!!

I’m not going to either.

Anyways, regardless of skipping out on NYCC12 this season — my Reality/Extra acting career has demands goddammit — we’ll be sure to cover it, anywhich way we can. We have connections, yo.

Hell, this is a long game. Hence the long-awaited, heavily-anticipated review.

But that’s OK. With the holiday video game buying season just finding it’s stride, there’s still a strong possibility many gamers are contemplating some recent jawns from this past month. You see, a publishing friend of mine over at THQ (hi Simon!) swears the game’s critical path is only 20 hours, but, without performing any of the countless side missions and going as “critically” swift as one could, I logged in at over 36.

When you work every day and you got tons of other games to review, that 36 feels more like 96.

If you’re one of those Skyrim/Witcher types, particularly one who enjoys a foray into cryptic lands of puzzle and wonder, this Darksiders sequel should certainly stir well in your cup of chi-mint. Having not played the original (shame on me), I have nothing to compare it to other than Four Horsemen of the Apocalypse-lore, RPG/platformers, and other games with comic-inspired art direction.

But Darksiders II is an aberration in itself. The first time we demoed it, just after the final second of E3, I likened Death’s environment travel/cliff-lingering escapades to those from Prince of Persia. Again, a good thing. A very good thing. Thus, your actual physical inclination is seemingly more important than narrative, objective and destination, whereas other RPG’s like Mass Effect rely more on your conversational choices than your actual exploratory exploits.

Your outcome can only possibly be affected by platforming. It’s sort of Legend of Zelda in that case, except Death looks a hell of a lot more exciting than Link and speaks terrifyingly well-spoken.

Not that Death’s story is second-rate; but there’s no doubt longtime Marvel comic artist Joe “Mad” Madureira‘s scenic detail and impressive costume design blows any of the nursing home soul brouhaha of the water. Literally. Half the game is just making sure the dams open up to preserve the land of War(?). Yeah, slashing enemies with an ultimately impressive laundry-list of sickles, hammers, and blades — and having the choice of updating and upgrading these at will — make the game worth the buy.

And, yet, while scurrying around putting idiot dungeon monsters down isn’t quite the stuff of genius, most of your brain cells will be fried by all of the puzzles and treasure-hunting you explore and conquer.

If you like loot, this game’s got it. Upgrading your mantle over and over is also quite simple, despite its severe time consumption. And NEVER miss a jump! Or try to limit this. If you do, you may just be in for a long-haul. (Trust me. Cardinal Gary broke a few PS3 controllers over his apparent indestructible boob-tube.)

Bosses are scary, scary big, and often scary fast — surely a lot harder to beat than the final naysayer. As puzzled as the congregation this writer has before him, I don’t get why 75% of the games on the market are like this, but DS2 doesn’t fail to carry on such a tradition. And where are the other Horsemen? “This is no place for a horse,” says one gruffly English-voiced Death. More accurate would have been his call of Darksiders II not being a place for other Horsemen. Most have heard tales of such mystifying creatures, so why not showcase the entire lot? Give us something edging for a Darksiders III. Something.

Despite these mere flaws and an ending that practically, well, ends before it begins, Darksiders II brilliantly takes the road more traveled and gives gamers arguably the best bang for their $59.99 plus tax.

Jeff Lemire is not your average star. He’s more like the trendy guy sipping a crisp ginger buck to the emotive rhythm of The xx in the back corner of East Hollywood’s La Descarga.

And after reading his original graphic novel The Underwater Welder this past week (on the set of “Cougartown”, mind you), this man can get in anywhere he wants as far as I’m concerned. But, it’s more likely he’d opt for a pass with the workload the writer has souped up for himself lately with DC Comics.

Lemire’s Animal Man has certainly been one of the shining gems of the New 52, just as he freaked comic geeks freak with a bad-ass Frankenstein, and, now, is’t no surprise that his Justice League Dark is far more than just a bag of parlor tricks. Shit, man; I’ll take this title right now over the one with the Caped Crusader, Man of Tomorrow and Warrior Princess any day of the week.

In fact, JLD has certainly made a star out of John Constantine, a character more known for vague appearances in previous Swamp Thing comics than his own Hellblazer format. Constantine persistently delves himself into the magical realm of the DC universe, which puts a pretty spin on what would be another book of misery and despair. Lemire may not grasp the Brit’s dialect as well as.. say James Robinson has done over in The Shade.. but who can fault the writer for choosing added dimension over Cockney dialogue? You never know what you’re going to get from J.C. on a month to month basis with JLD, with shaken being how the crazy detective likes it — not stirred.

This week’s Justice League Dark #0 was the Rev’s most enjoyable DC read this week — after battling with some mighty zero issues from Batman Inc. and I, Vampire — proving this quiet Canadian just can’t avoid the spotlight. And, ironically, the brash Brit lead of JLD avoids the typical snide and conquer with a heartfelt tale of friendship. Even though Constantine burns any notion of “bro’s over ho’s’ in the ever zestful origin of his on-and-off interest with Zatana, his appreciation for the pro-to-ant wizard is keenly felt.

The Underwater Welder is another poignant story, one which a man with simple intentions can’t keep away from the “deep” end. The graphic novel is completely written and illustrated by Lemire, spotlighting the mental anguish many deal with when working on the seas. We hear plenty about the struggle many fishermen, or just about any of those who live and die by Earth’s violent waters, deal with in trying to support one’s family. But never have we witnessed such a tail spun so scientifically haunting — yet, so real — involving responsible men of the ocean quite like this before.

While there’s always been an Adam Curry, there’s never been a Jack: one as identifiable to any who has suffered loss, even with reception of God’s greatest gift. And perhaps the best part of Welder is that this story can be read by anyone with two eyes and a toilet; you certainly don’t have to be a “comic geek” to enjoy Lemire’s delicious scribbles and leviathanesque literature.

With this wonderful array of comics, the Sweet Tooth scribe proves his astonishing 2012 summer is ready to bowl right into fall. If Jeff Lemire isn’t a household name after New York Comic Con next month, then we’re all just not doing our part.

Feel free to check out legendary comic journalist Jason Sacks’ interview with Lemire right here for a rare chance of diving into the mind of a man who’d rather play cool in the back of the lounge than boast right in the front of it.

Stay tuned to GHG soon for: Who’s Talking Now?, a discussion on the WWE’s recent circus of color commentary, by Brother Joe and yours truly; Transformers: Fall of Cybertron by Cardinal Gary Brooks; and the Residently Evil Return of Sister Emma. Thanks for reading.