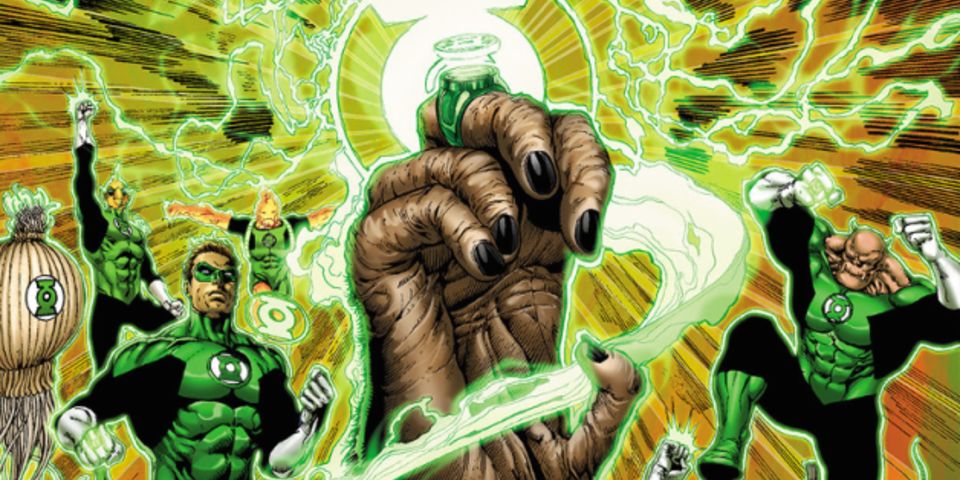 Detective Comics #950 is one of those comics that’s tough to review on its own. It’s a transition issue, a comic that spends most of its time setting things up to be resolved in “League of Shadows”, the upcoming super crossover action epic. The problem is that there’s just not a lot here to make a reader want to come back for “League of Shadows”.
This oversized issue is written by James Tynion IV (Batman Eternal, The Woods) with art by a slew of artists. Tynion delivers a trio of talky tales which profile characters who will be part of the epic. The lead story focuses on the always intriguing Cassandra Cain. “Shadow of a Tear” is a decent enough little story, with some nice sidebars about Cassandra’s love for ballet and even a reversal of the “vanishing Batman” trick. But this little story drags on and on, with endless narration boring the reader who wants some action and wonders why the hell he’s supposed to care about all the blah blah blah.

The second story — focusing on Azrael and Batwing — is even more dull. There’s an intriguing core idea here about Azrael’s suit being infused by Heavenly energy, but there’s just no reason for this stultifying info-dump. Double-page spreads are filled with words, words and yet more words and none of those words are very interesting. The third story, a quickie with Red Robin, again is a whole lot of portentous talking over exciting action, and is essentially an extended teaser for the “Dark Days” storyline. “Dark Days” might be the greatest Bat-epic since Hush, but there’s nothing here to make me desperate to pick it up. I’ve been reading the Rebirth titles in trades. Detective #950 might read perfectly well in trade as the setup for amazing events soon to happen. But as a standalone issue, there’s just nothing compelling here. 2/5 Glowing Bats.

After a crazy, action packed first 6 issues of All-Star Batman Scott Snyder shows why he is a master writer by slamming on the brakes and slowing down issue #7 with a introspective issue focusing on who Poison Ivy really is – and it goes to show that the best villains are the ones who really think that they are doing what’s best for society. Tula Lotay’s (Ninjak, Supreme: Blue Rose) artwork is sincere, beautiful, and simple. She brings an independent feel to a mainstream book and it’s a beautiful blend with Snyder’s writing.

And if this was any other book this review would be over BUT All-Star Batman #7 continues with the extraordinary story of The Cursed Wheel following Duke and his own side-story, which is both rich and fantastic. Seeing someone with the same drive as Batman while trying to escape the very large bat-shadow that everyone else in the Bat-family has tried to escape. As always, Snyder continues the trend of being a continual “must-read” writer and this issue is no different. Keep the bat-trend alive and pick this book up! 4.5/5 Bat-Bibles.

“Mortals, not gods.” With those three words in the early pages, writer Steve Orlando (Supergirl, Midnighter)quickly  establishes the theme of this book. Batman has decided it’s time for a fresh start, a rebirth of sorts, that begins with a new team. A team of the people, because “everyone can be a hero.” Bats relocates to Rhode Island and grabs Killer Frost, Black Canary, Lobo, Atom (but is disappointed when he gets Ryan Choi and not Ray Palmer), Ray and Vixen (whom he says there’s no team without).

This title was a really enjoyable read. Orlando’s writing is funny, and shows that he understands the characters and what makes them tick. Everything from Canary and Lobo’s arguments (obvious UST is obvious) to Vixen’s issues with being a hero while all the people of New York care about is the model persona is pure gold. Ivan Reis’s (Captain Marvel, Justice League Dark) artwork is gorgeous, especially when Killer Frost is using her powers. Real life ice and snow wishes it could be that pretty. I honestly can’t wait for the next issue. 4.5/5 Bibles.

Planet of the Apes meets Green Lantern in DC’s latest collaboration with Boom Studios. The minds that combined to create this story, Robbie Thompson (Supernatural, Jericho) and Justin Jordan (Deathstroke, New Guardians) deserve some major credit.
Just based off the first issue in this 6-part series, I am hooked. The story starts off with an ominous figure handcuffing several members of the lantern corps, cuts to a ring falling onto a future time on earth where apes have risen above humans which has been wiped out and it does not stop from there.

Not only was the story addictive, the colorful art style (by Barnaby Bagenda, of Omega Men, and Evil Dead 2 fame) chosen to accompany was perfect. The use of color to keep attention flowing around the page beautifully complimented the story. The fast paced, action pack story kept my eyes glued to the pages. I have no idea how I will be able to wait until the next installment of the series. 5/5 Magic Monkeys Agree.

Kingpin #1 is my type of title: taking an inherently unlikable villain, and making them not only sympathetic, but sincere and interesting. This title is reminiscent of the rare Lex Luthor: The Authroized Biography from back in the 1980’s: here, the Kingpin enlists in the skills of a down-on-her-luck writer (she’s a drunk divorcee who went from Pulitzer-prize winning war coverage to covering hard-luck boxers. His plan is to go legit, so it seems, and rather than covering up his sordid past, wants her to tell his full story. Warts and all.

This is all following up on his recent fall from grace and power, and it’s (pleasantly) difficult to tell whether Fisk’s past will remain there, or if this is just another scam to get back to the top. Knowing the Kingpin, he’s playing a long game here. The writing by Matthew Rosenberg (Rocket Raccoon) is sharp and moves like a breeze. There’s enough development to each character without anyone getting bogged down in exposition, and that’s key. Expository dialogue is really hard to make natural. Ben Torres’ (Knight Watchman) art here is right up my alley, and reminiscent of Denys Cowan’s work in DC’s first run of The Question back in the 1980’s. Here, Kingpin is all smiles and sincerity, but with the occasional hint of danger; an altercation in a park with a derelict did not pan out as I had expected, and it was refreshing. It’s a great day when a character as long-lived as the Kingpin can not only headline his own title, but do so while continuing to surprise. This is probably the best title of the week, and it’ll be hard to wait for the next one. Highly recommended. My only gripe? It’s a quick, short read. If only it were longer. 4.5/5 Sparking Apple Juices.