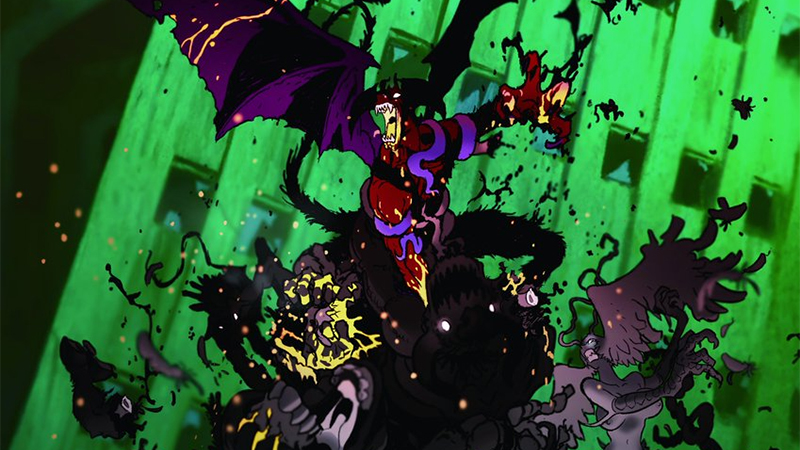 Go Nagai is one of the most influential creators in anime and manga, having pioneered both the super robot and magical girl genres with Mazinger Z and Cutey Honey, respectively. He was also one of the first artists to make ecchi/erotic horror more of a mainstream genre and his cemented his infamy with his grotesque and epic manga series Devilman in 1972. The anime was extremely controversial due to its adult themes and extreme gore and nudity. It has been adapted several times over the years with series and OVAs in the ’70s, ’80s, and ’90s with various levels of quality.

This newest version DEVILMAN crybaby was produced as an original Netflix series, helmed by avant garde director Masaaki Yuasa (Ping Pong, The Tatami Galaxy, Kaiba). It’s an reinterpretation of the original manga with an entirely new art style as well, though there are still hints of Go Nagai’s iconic character designs.

Devilman is an extremely dark tale full of psychological and existential horror and it was a heavy influence for anime series such as Berserk and Evangelion, both of which deal with similar themes. The story follows Akira Fudo who is a teenager in high school. His mysterious childhood best friend Ryo Asuka returns to Akira’s life to tell him that a race of demons has returned to the earth to take it over and the only way to stop them is for Akira to fuse his body with a demon and gain his powers. Akira thus becomes Devilman, with the body of a demon and the heart of a human. He has to fight the various demons in the city and figure out what their master plan is. However, Akira’s family and eventually all of humanity are in grave danger.

Since this anime was never intended to be shown on broadcast television, it is chock full of uncensored blood, gore, nudity and sexual acts. DEVILMAN crybaby is hardcore and not for the faint of heart, but the extreme content is not just there for shock value as it contributes to the overall narrative. This is a story about how everyone needs to work together to achieve peace (to conquer their literal demons) and that, sometimes, love and goodwill isn’t enough to save the ones you care about.

The world is chaos. The universe is death. Quite frankly, this is one of the most nihilistic and bleakest anime series I have ever seen and every character is put through the maximum amount of suffering. The ending of the manga is one of the most infamous of all time and it was incredibly ballsy of Go Nagai to go that route back then, and the anime interpretation is equally as tragic and beautiful. Though there are some lighthearted moments they are few and far between.

The animation was done by Yuasa’s indie studio and it’s unique looking — a departure from the style of most of the anime on the market right now. It’s deceptively simplistic but the colors, lighting and angles are creative and artistic and the editing for the scenes is clever. The fight scenes are epic and when it gets hot and heavy it reminds me of Trigger style animation with everything being elastic and distorted. The score by Kensuke Ushio is fantastic, utilizing synthesizers — with a distinctly synthwave flavor — and bombastic choral pieces in equal measure. Everything about this show is top-notch; though, at only ten episodes, it feels a tad rushed pacing wise. I don’t know why they didn’t use the standard 12-13 episode arc but at least there’s no filler. Netflix has a certified hit on their hands as well as an early contender for one of the best anime series of 2018.