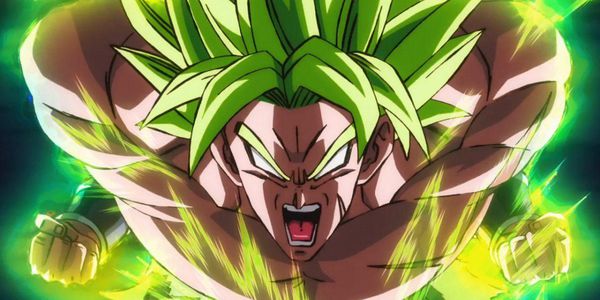 Dragon Ball Super: Broly has everything you could ask for in a Dragon Ball film. It even has great visuals, an element even the most diehard of Z-Fans had the right to bitch about in late episodes of Dragon Ball Super. The new flick has art sketches that come to life, feeling much grittier than the majority of DBS without losing the life of something current. In fact, many of the characters are presented with a great balance of classically detailed early-90s Dragon Ball Z and the looser, more contemporary visual style. Dragon Ball Creator and DBS: Broly scriptwriter Akira Toriyama should take note of the film’s astonishing “throwback” visuals for his next project moving forward.

Best of all, Tatsuya Nagamine‘s spiraling direction — in the spirit of the hyper-stylized art of Spider-Man: Into the Spider-Verse — is a pure eye-fuck. If you’re OK with a intergalactic comet shot of neon greens and thunderous yellows reigning down on your peepers while your dome tilts like a puppy teased by a delicious snack… this is the anime for you. However you felt about Dragon Ball Super‘s “Tournament of Power”, throw that all out. And it was pretty cool right? Well, Broly is a “Tournament of Power” Triple Threat Match on LSD. While continuing right where Episode 131 left off, it’s no spoiler to say that DBS: Broly‘s lengthy climax (nearly the final 2/3rds of the 1-hour and 41-minutes) is a staggering sci-fi handicap-scrap between Vegeta (AJ Styles) and Goku (John Cena) against Broly (“Brock Strowman”). Our favorite Saiyans certainly get these hands from this mega-beast, and the epic battle’s numerous highlights take Ultra Instinct to another dimension.

Before we get there, loyal Crunchyroll-binging weebs and Hot Topic-shopping casuals (mind you I’m a combination of both) will learn more about the Saiyan origins. It’s here where our sympathies will lie with Broly, the banished son of Paragus, a once loyal lieutenant to King Vegeta. Paragus is a maniac determined to make his boy a personal power project. Watching Broly fight this Old World way of thinking is just as enticing as the Godzilla-level of madness we see him fight through for the next 65-minutes. In another early thread, we see a partially retconned piece of Goku’s famed history. Born with Superman-like power levels and the knowledge of an anxious Frieza ready to blow up “Krypton”, we see Bardock give his baby the Kal-el treatment. Thankfully, these bits of early Kakarot and Prince Vegeta coincide nicely with Broly’s story, are easy on the eyes and pack plenty of heart.

Thrown in between the hyper-intense Saiyan battle scenes are lighter moments featuring kookie favorites Bulma, Whis, Beerus and, of course, Frieza and their chase for, what else, the Dragon Balls. But it’s the Frieza Force’s Cheelai and Lemo who are the unsung heroes of Dragon Ball Super: Broly. Much like your favorite Star Wars films, these “minor” characters add the right amount of grace-under-fire to keep Broly from being too “broey”. And while the tone of the movie is weighty and too much comedy could have made it cheesy, there’s one particular moment mid-battle involving Piccolo that should kick you in the pants. I can’t wait for you to see it.

Dragon Ball Super: Broly releases in theaters on January 16th. Get your tickets via Funimation.