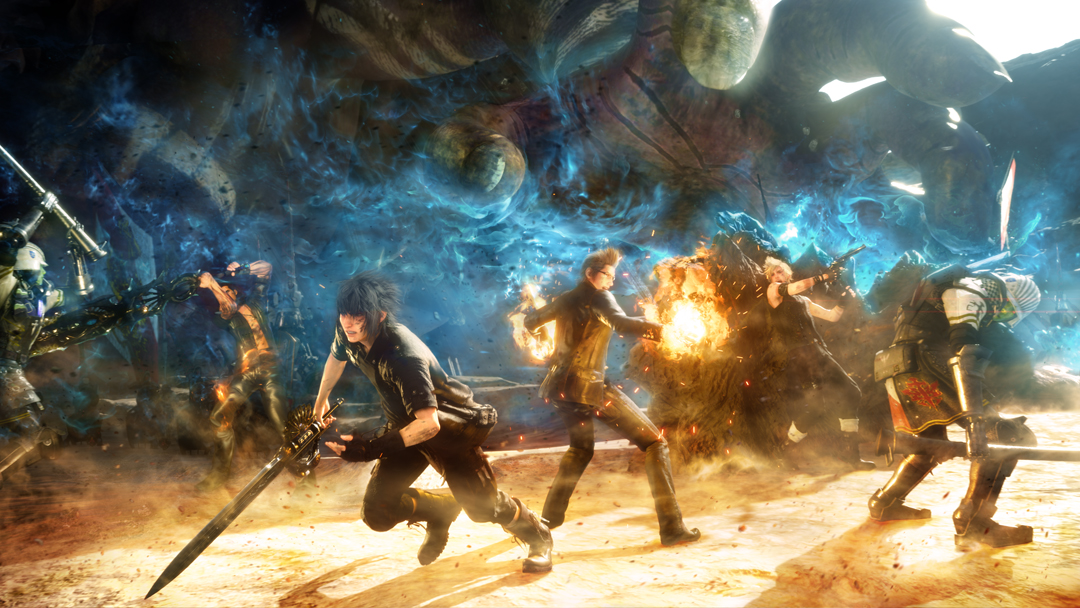 In our special #E32016 Edition of The Bible Scale, we begin GHG’s ranking of the games focused and played on Day One (Tuesday).

FINAL FANTASY XV (Square Enix – PS4, X1 – September 30) – Today, I was able to play the “Trial of Titan” demo and witness a “Special Stage Presentation” over at the Square Enix booth, with Director Hajime Tabata.

Before I get into my hands-on experience, let’s talk Wait Mode. This option gives players the chance to become more strategic in combat–momentarily haulting the action to select targets, cast spells, and fully utilize teammates’ actions–which should prove beneficial to many old school FF players since FFXV offers a far more robust Devil May Cry level of action than the slower, turn-based sequences of before.

During the presentation, Tabata also introduced spell crafting (a.k.a. magic syntheses)–mixing up different elements of fire, ice and lighting to your own liking and effect.

(cont.) As for the gameplay itself, it was fun! True–and, like most Japanese games I’ve played, the camera can wind up a little wonky in some spots, as looking around mid-combat will take some time getting used to.

Thankfully, going from quick knife paces to more lumbering large blades and ice storms was a pretty seamless transition . I was never once frustrated mixing up an array of techniques to defeat any AI, or the giant hand-swiping manrock. Or, was the AI just dumb? Was the difficulty tempered a bit to engage new players into this new next-gen era of Final Fantasy? Likely, a mix of both. QTE’s were in effect, too; but my timing felt smooth as I blocked, parried, and teleported my way around the fight.

As usual, despite how pretty the game is, framerates weren’t great during the open-world presentation videos or game demo.

Still, FFXV‘s action is frantically fun, and the world seemed filled with so many splendid things to do that it even managed to make upgrade screens set around a campfire look fun.