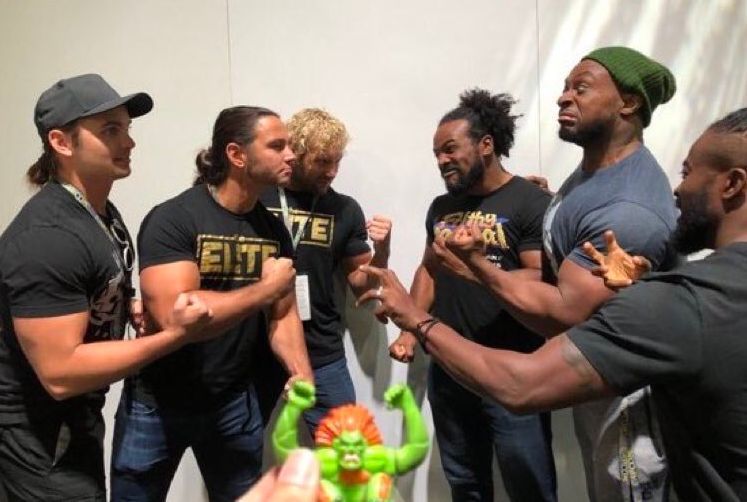 This was, by far, the strangest Electronic Entertainment Expo (E3) in quite some time. What led up to my personal favorite geek convention was a feeling of joy and optimism, despite all the many “cautious” thoughts from the interwebs heading into the world’s biggest video game convention. The sad truth, now, is that many publishers are spreading their goods elsewhere– some only next door from the Los Angeles Convention Center at LA Live (Microsoft Xbox), and some even further into horrendous LA freeway traffic (EA Play). PlayStation has their own “Experience” and Nintendo does everything “direct”, so the strength of actual big games on the actual showroom floor is further weakened. That said, E3 is a great time to see old friends, play major games far before release, pick up cool swag/free snacks and refreshments, and, most importantly, show new friends (and significant others) something that can be quite magical. 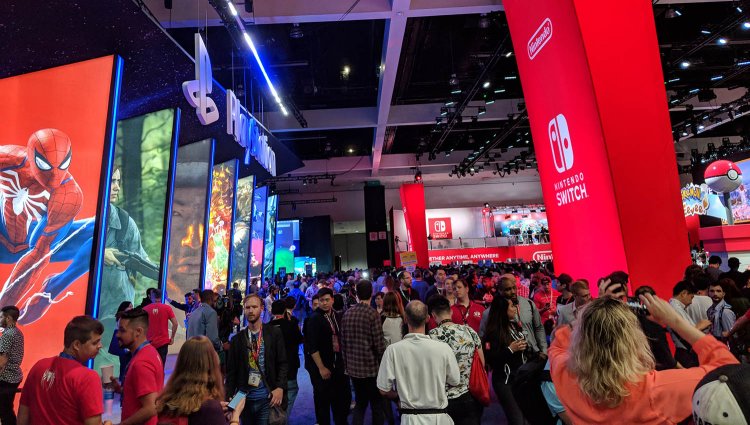 Of course, the experience of watching the press conference livestreams and video directs can be quite different than experiencing the games and events first-hand. Even if you were down on many of the presentations this year, E3 is still something any gamer should still try to attend to see it all for yourself. With that, I have a Moody list of The Very Best & Worst from E3 2018. Peep the hustle.

3. Lack of Swag – OK, so this one probably doesn’t sound like a big deal to some and you’d thing lengthy lines would have showed up on this list here instead. Long ass lines to play 10-20 minute demos have always been a part of E3. Most of the publishers have done a better job at making sure lines are capped when appropriate, and some lines even required registration to come back at a later time. It doesn’t always work, and while waiting forever to check out games is still the most frustrating thing at the show, it’s nothing new. But one major overhaul that E3 has experienced over the past few years is the overall lack of great swag given away from booths (mostly handed out upon game demo completion).

Now that consumers are a major part of attendance, most publishers are selling their swag rather than handing it out. Bethesda, Square Enix, Xbox, PlayStation and many other major video game companies — even Funko POP! has an E3 booth now — have on-site stores, while companies notorious for great E3 swag (Warner Bros) no longer offer any free goods. Gone are the days of coming home from E3 with a dozen t-shirts, relevant gifts or more.

2. Bethesda’s Hoopla – After attending last year’s Bethesda press conference and “Bethesdaland” after-party — arguably the Expo’s greatest presser party ever — what the most lauded video game publisher in the world presented at this year’s E3 presser and showroom space was a dud. Now, while I didn’t attend the Bethesda conference this year, I did see pictures/hear details of its after party and it didn’t look like much. As for the presser itself, Rage 2 was a surprise delight, Starfield and new DOOM/Elder Scrolls sequels were announced. The always online Fallout 76 polarized fans of the famed series, and the rest of the conference was meh.

Worse, the line to enter the Fallout 76 “Vault” was capped at 2-hours plus long. Trust me, I spent my entire morning in this line and only because I “merged” myself in front of the cap (apparently, playing a lot of Assassin’s Creed has its benefits). When I finally got to the front, I was treated with corny throwback reenactments, cheap party favors (the Vault Boy mask is cool and going on the back of my apartment door), and an uber long Vault 76 “experience”. While many may have enjoyed such a thing (I fucking loved Fallout 4), this just felt like a huge waste of time, not seeing any gameplay footage or taking home anything more signicant than plastic things and a glass Nuka Cola. At least Rage 2 had little to no lines, ice cream (!!), a 7-minute hands-off demonstration, and 15-minutes of exhilarating gameplay (!!). This saved Bethesda from having one of the worst major E3 floorspaces ever.

1. Lack of Games – Well, yeah! This is a video game convention, and this member of the “Media” played one game on Thursday, the show’s final day. Now, granted, most of my hands-on appointments took place on Tuesday and Wednesday, but that’s got to be pretty telling isn’t it? If you make an exception for mobile/VR experiences, most publishers didn’t offer much at all. And with the public now given the chance to attend E3, many game publishers’ convention space was even upstairs in the concourse area where private meetings and other business agendas take place (here’s looking at you, Cyberpunk 2077). One major title even had their “show-off” at a nearby hotel (hello, Sekiro: Shadows Die Twice).

But the biggest blunder of all was Sony PlayStation. And, no, I’m not picking on them because I’m a life-long Xbot. With Microsoft packaging all their E3 assets to the.. ahem.. Microsoft Theater just down the block, Sony occupied the gigantic space leftover in the West Hall. They had one game. Okay, three plus many more if you count the VR slots tucked way in the back. But Sony presenting Spider-Man and two Activision games that were also presented at Activision’s South Hall floorspace (Destiny and Call of Duty) is a major disappointment. Then there was the international media room that any press member could have entered and picked up and played an array of games that was hidden way to the very back corner of the convention.. ugh, don’t even get me started on that. For a company that takes pride in greatness and the sheer amount of games they have in their arsenal, Playstation’s E3 floorspace was shit.

3. Xbox Kicks Ass – Ironic that, after the yearly rollercoaster ride that was my relationship with Xbox (hated their E3 2017 presser, still bought and loved the Xbox One X console), this winds up on the “Best” section. It’s even more ironic that this also happened at E3 after I’ve sort of become a slight posterchild for God of War and accused PS4 fanboy. Just when I’ve finally taken a gander to “the darkside” that is Sony’s most cherished console and exclusive video game library, Xbox stole much of the shine from Sony this year with its cleanest presented, most impressive E3 press conference in years.

Sure, Microsoft’s video game division still has plenty of its detractors who note that the majority of the presser’s game-barrage is still playable on PlayStation. That said, most of these third-party titles will play better on the Xbox One X in True 4K HDR; Xbox also dropped several impressive exclusives of their own (Forza Horizon 4, Gears of War 5, Halo: Infinite, Ori & the Will of the Wisps, Cuphead DLC, Crackdown 3, We Happy Few, etc.), a much larger number of exclusives than that of Sony in their presser; and, arguably best of all, Phil Spencer and company set their future, in-home exclusive success up brightly with the purchase of 5 rivetting game studios. And, exclusive or not, Xbox’s sheer focus on games gave us far more looks into new stuff than any other publisher. Period.

2. Overall Organization – Between giving the media early access in the mornings before the general “gamer” crowd busted through, and some publishers giving everyone a chance to schedule pre-show appointments to play their games (Super Smash Bros Ultimate, I see you!), everything felt more organized about this year’s E3 than the last. While Day 3 was an expected shit-show due to everyone being allowed entry the entire day, at least the first 2 days pleased more industry folks and media-goers, and consumers were finally able to make appointments for different things throughout.

Maybe because EA and Microsoft had their own thing, it appeared like there was a lot more space to move around in both halls. And while lines were still stupid long for most AAA game demos, gone were the ridiculous “wait all fracking day” camp-outs witnessed last year for titles like Super Mario Odyssey and Wolfenstein 2.

1. The New Elite Day – If it wasn’t for my girlfriend, I would have totally forgot about one of the great moments in E3 history: a video game confrontation between the WWE’s longest reigning heavyweight tag team champions and just all-around great geeks, The New Day (Xavier Woods, Big E Langston, Kofi Kingston), and the most famous and arguably greatest, non-WWE wrestlers in the world, The Elite (Kenny Omega, and Nick & Matt Jackson a.k.a. the Young Bucks). But this most epic Street Fighter V battle was far more than mere e-sports bragging rights; this was the culmination of a 3-year build-up on Twitter between 2 of the most famous and revered pro wrestling factions of all time…

It all originated when WWE wrestler / Host of YouTube’s UpUpDownDown Austin Creed (known to the mainstream as Xavier Woods) challenged fellow hardcore gamer and now current IWGP Heavyweight Champion Kenny Omega to a fight game face-off. After several shit-talk tweets and EVO digital collisions, the 6-man Capcom Tag turned into a Street Fighter battle for the ages, and it was only righteous that Creed and eventual champion Omega went down to first-to-5, 9-fight epic. I’m not one to watch others play video games, competitive gaming, etc, but as a massive wrestling fan, this was everything. Crowd thrown pancakes, one superkicked host, habenero pepper sickness complete with stage vomit, and an eventual WWE stars-hug-NJPW stars warm embrace later, and I can’t imagine a more thrilling and satisfying event at E3 in my 7-years of attendance ever. #thiswasawesome