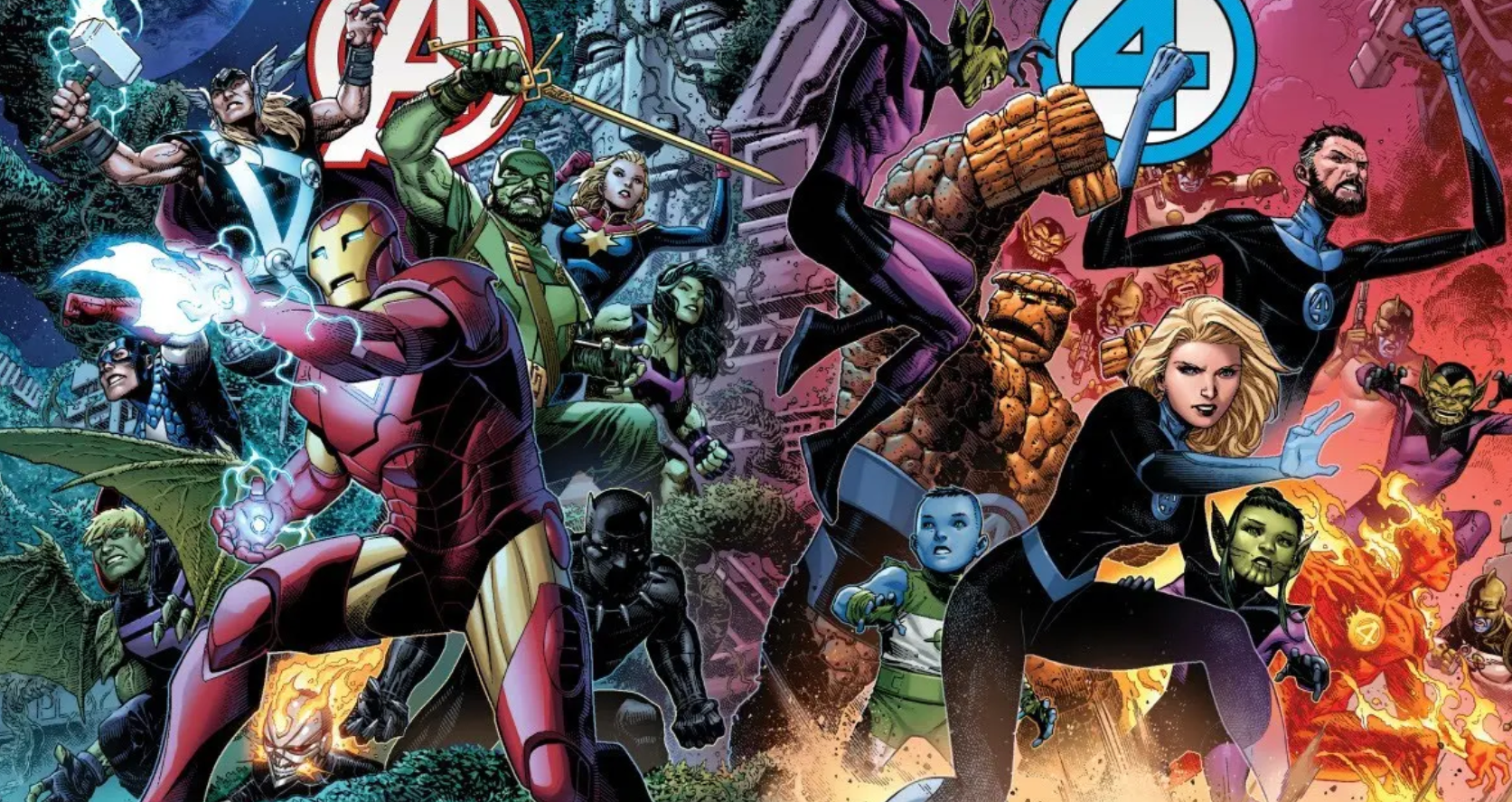 Over the past decade and a half there’s been a lot of talk of event fatigue, particularly with Marvel Comics who have a “world ending” event nearly every summer. While I’ve generally enjoyed most of these events and absolutely loved two (War of the Realms and Secret Wars), I understand the sentiment and somewhat agree with it as it becomes harder and harder to be genuinely shocked and excited, yet Empyre #1 manages to accomplish that feat.

In typical Al Ewing and Dan Slott fashion, it’s
a new story that’s rooted in the history of the Marvel Universe and it’s evocative of previous Avengers and Fantastic Four conflicts — Annihilation Conquest, Infinity, and obviously the Kree/Skrull War, which in some ways it’s a sequel to — while doing something exciting with it. While the imagery’s similar, however, there’re new elements that add a different dynamic to this story, specifically former Young Avenger Hulkling as the emperor of the united Kree and Skrull armies and the rise of an old but oft-forgotten alien species, the Cotati. Given all these new dynamics, I’m interested to see where this story goes, which hasn’t happened often with many Marvel events. 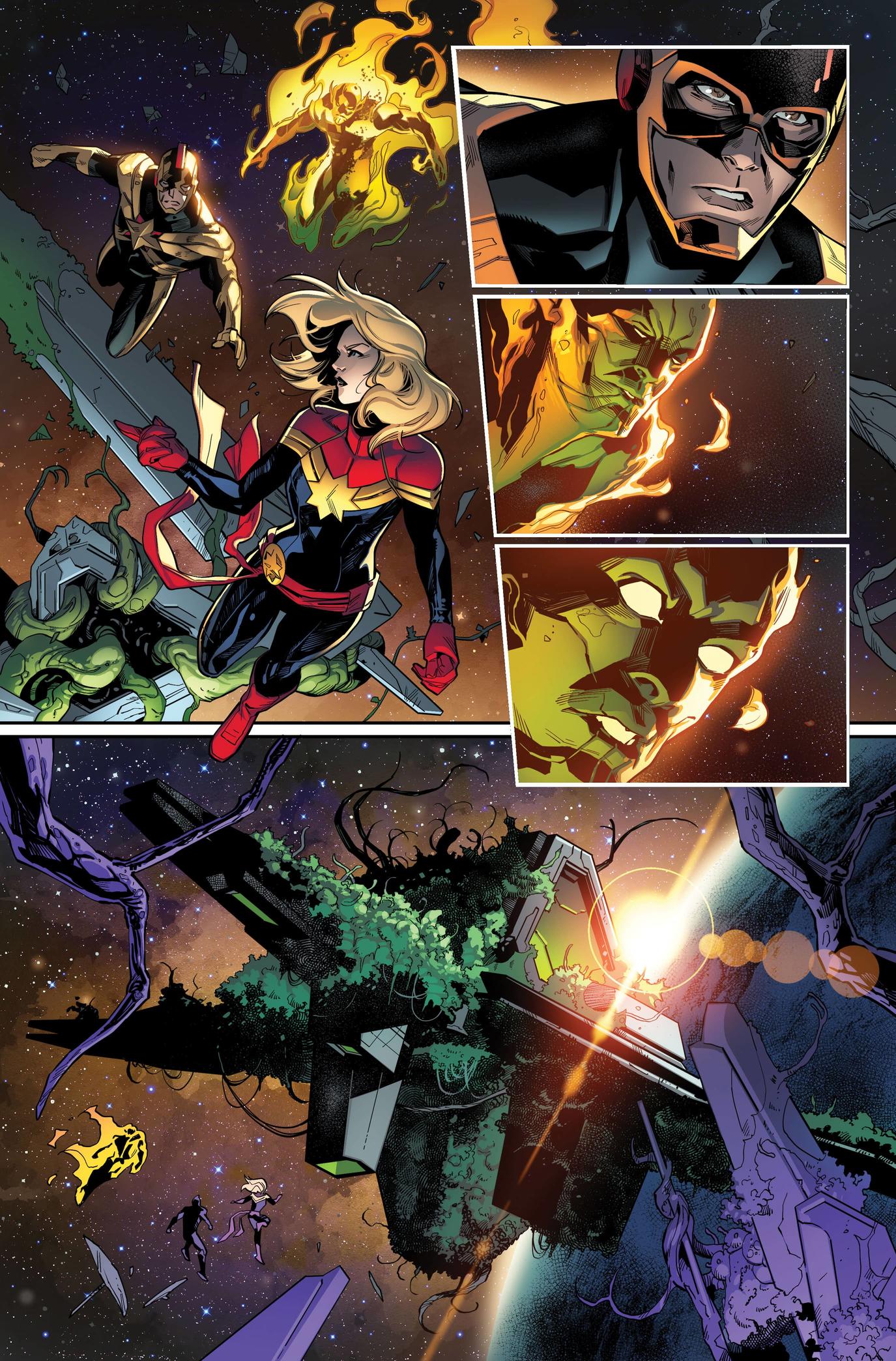 The one thing most Marvel events don’t fail at, however, is memorable moments. Even the most mediocre and downright bad Marvel events have had then, and in this respect, once again, Empyre did not disappoint, especially when (spoiler warning) Ghost Rider ghost rides the ship for the Avengers. Valerio Schiti‘s art and Marte Gracia‘s colors, which are excellent throughout, really make that panel pop and I honestly lost my mind when I saw it. That,along with other moments, combined with the intriguing and still slightly mysterious story leave me excited to read the next part of this story. 4/5 Ghost Quinjets.

Aftermath! That’s what Boom! is calling the next story arch of the MMPR title. This one picks up with the final frame from issue #50, so spoiler alert: Lord Drakkon plummeted to earth and emerged from a crater looking quite worse for wear. “Drakkon minus the Lord” as Aisha (the Yellow Ranger) put it. The Shattered Grid villain is a bit out of sorts as he doesn’t know where he is or how he got there. But, the Rangers don’t care and they promptly open up a can of whup-ass, which turned out to not be a big enough serving, and this dimensions Tommy (the White Ranger) had to show him who’s boss. Zordon and the Rangers imprison him beneath their command center while they ponder what he’s doing here.

Elsewhere, Zord Zedd is back –after seemingly being defeated during Necessary Evil— and gets his minions back together because he, as always, has a plan to destroy the Power Rangers. So he sends down a monster that the rangers defeat way too easily. It turns out the monster was the decoy; not the plan. Zedd needed the green chaos crystal (another artifact from earlier in the series) to be recharged with the rangers own power, which it was when they used their power blaster to beat him. From there, Zedd uses the crystal to turn four of his underlings into the Dark Rangers. Now, anyone who watched Season 2 back in the day might be laughing at the thought of those god awful second rate morph suits that those dark rangers wore (Zedd even pokes fun at it in one panel). No, not those dark rangers; these are monstrous creatures infused with ranger power. 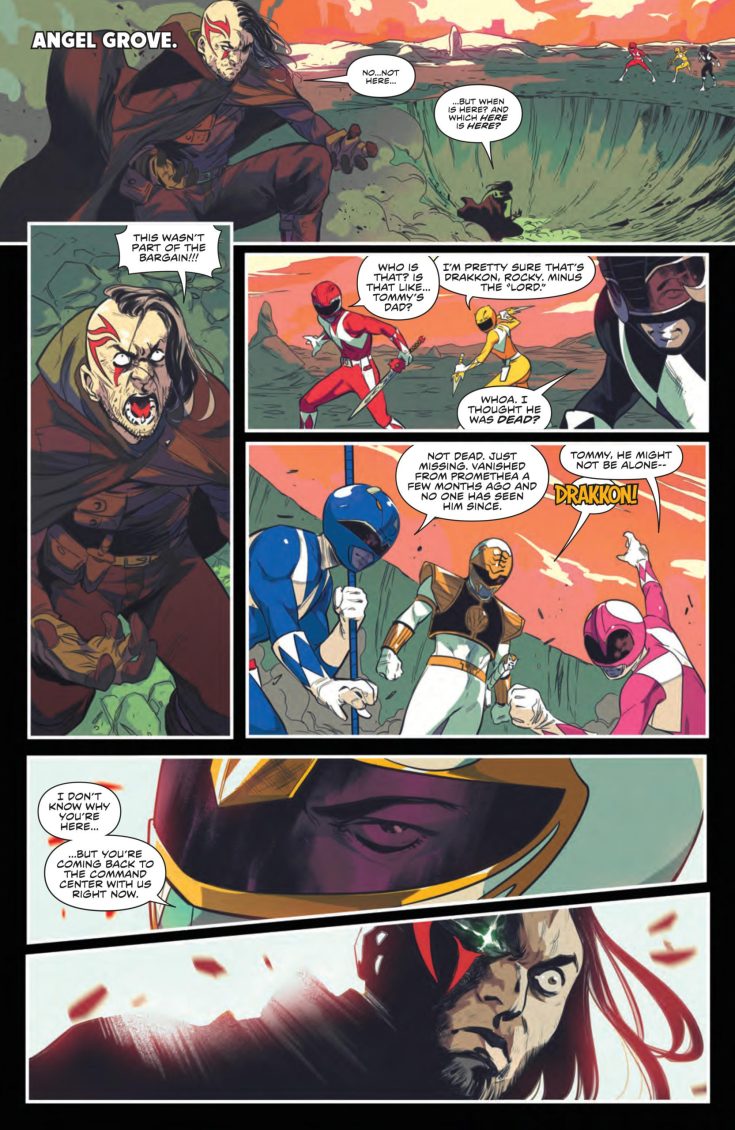 Cut back to Drakkon. I thought he was an alternate version, not the Shattered Grid one, but I was wrong. He remembers that timeline, and even teases Billy about how he killed him in his world. Our Tommy is also going through some stuff, coming to grips with his super villain doppelganger back in the mix. Drakkon’s plans and role in the story are left a mystery, but I suspect it won’t be too long before we figure it out. #51 is a great set-up for the next chapter in this title, and it expands on show lore as well as what’s been laid out in the comics so far. It’s great that they can still remain unpredictable, even to people who have been fans since 1992. 3.5/5 Bibles.

Oh! I almost forgot… I said four Dark Rangers– Squat, Baboo, Finster, and Goldar… but there are five. Come on! There’s always five Rangers! Who else, but Rita Repulsa returns and is set up to be the red Dark Ranger! Whaaaat? I didn’t see that coming. The Dark Rangers had so much potential in season 2, but never went anywhere. Drakkon being back on top of that… I can see the Rangers having a lot of problems in the next several issues. I’m also wondering how this ties into the two new titles BOOM! is starting this fall, “Mighty Morphin” and “Power Rangers” (creative!) one of the titles shows a new green ranger on the cover. I’m calling it now, that green ranger is this Drakkon after he convinces everyone he’s reformed and wants to be a hero– right before his sudden and inevitable betrayal.