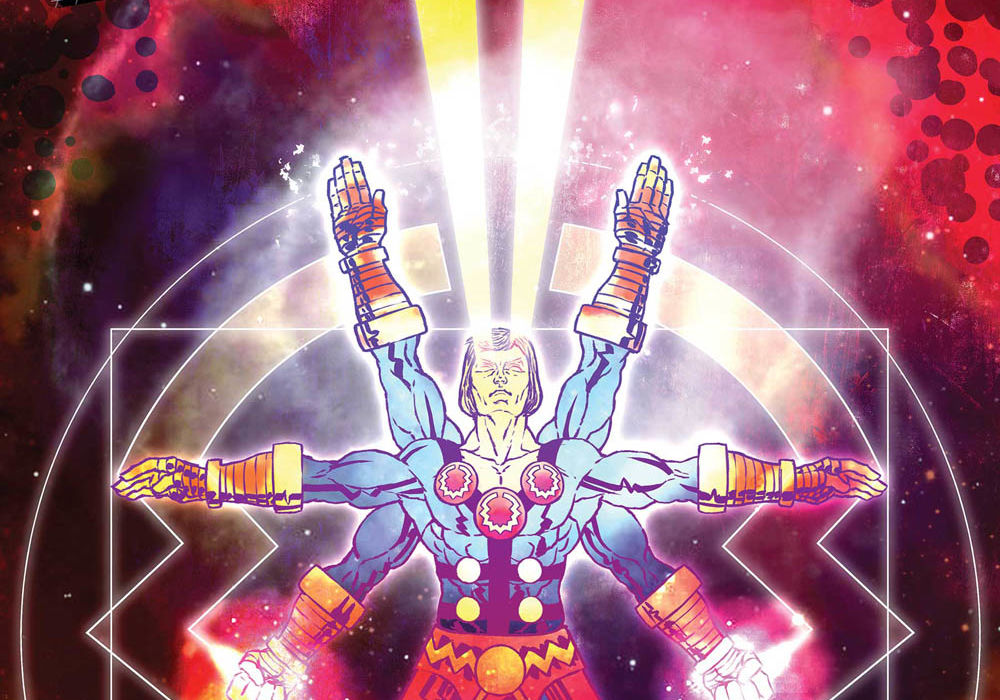 Kieron Gillén and Esad Ribic wrapped up their Eternal series with more questions than answers. When I began the more recent 6 issue run, I was excited to gaze at all the lovely Pages by Ribic. Then I was annoyed to find out it was Eternals pitched to the general audience with Thanos…I guessed he was Marvel’s new Wolverine Crutch. I stuck with the series and loved the broken Machine as the narrator…but I’m not reviewing that.

Last week, Marvel launched Kieron’s second Eternals series: Thanos Rises. At first I was disappointed with the absence of Ribic doing the inside art, although the cover is still a thing of beauty. Dustin Weaver takes the pencils on the interior with a JR JR FLARE, that lends to the retro feel of the plot. 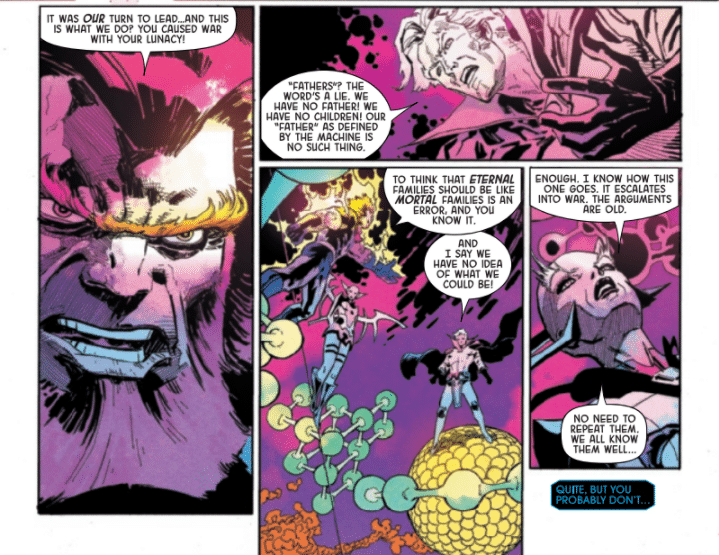 Gillen bridges the connection between the Titans and the Eternals. He elaborates on their ethics and their civil war, while the Machine narrates a cautionary tale almost sarcastically (since it’s been damaged as we read in the first series). I never knew why Thanos is always endowed with so much power, and this story wisely illustrates that more clearly than other books, and may have given me a little more appreciation for the Mad Titan. Eternals: Thanos Rises #1 is a crucial book to have if you are a fan of the Thanos Mythos. I would have given it the ol’ five biblios, but I still wanted it completely drawn by Esad Ribic. 4/5 Whiskeys.

The King is dead. Long live the King. Let me just tee up this review by starting with this: if you are a fan of Spawn, you should pick up King Spawn, even if you became a Spawn fan during the hype from the record-breaking 300th issue. Having said that, King Spawn #1 is a good jumping point to establish a new arc in the character’s lore, and introducing the paths of some fan favorites. This first issue is broken down into five stories. The beginning of the issue starts with the building story-arc for Al Simmons, and what is teased as an old foe coming back.

Original creator Todd McFarlane contributes to each story from a writer’s perspective. Sean Lewis takes the main stage on King Spawn as the writer. The art is broken up with a different artist on each story, so the style varies accordingly. This creates the showcase feel as the reader flips through the five stories. Artist on “King Spawn” is Javi Fernandez; the artist on “Haunt” is Stephen Segovia; on “Nightmare” is Marcio Takara; “The Hero” artist is Philip Tan; and lastly Brett Booth on “The Gunslinger” story. Inkers are Adelso Corona and Daniel Henriques. And finally, colors by: FCO Plascencia, Andrew Dalhouse, Marcelo Maiolo, Peter Steigerwald, Dave McCaig, and with lettering by Andworld Design and Tom Orzechowski. It is an understatement to emphasize the roster of sheer talent. 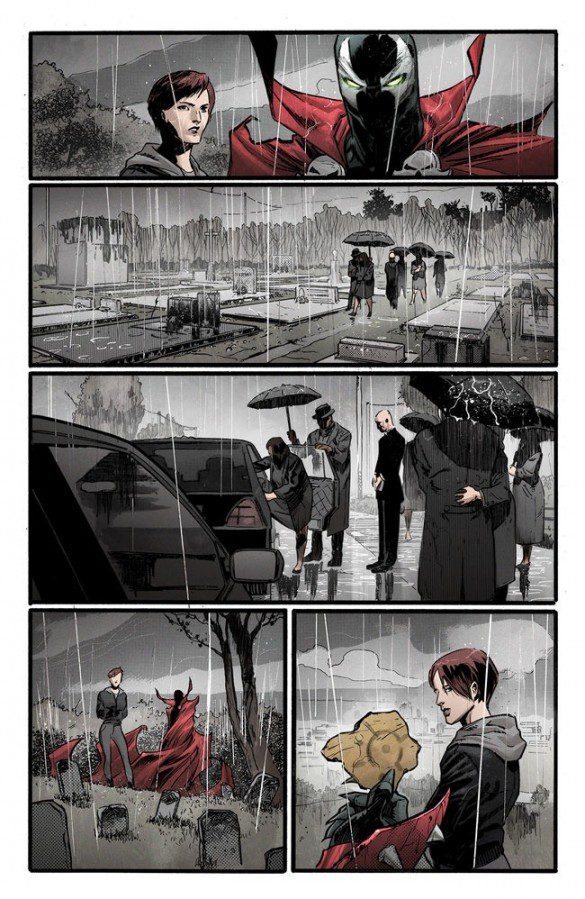 No spoilers here, but this story incorporates the many other Hellspawns’ in the Spawn Universe. This is the team-up factor in King Spawn. This extraction in the lore gives the main Spawn title the freedom to focus on just one character again. The “King Spawn” story creates the junction from an old Spawn villain and the branching out effect that leads into the main arc of this comic. The next story is one that focuses on a personal favorite character, “Haunt”. Much like the Haunt story, there is a direct tie into the Spawn Universe. This would not be compared to the massive Image Comics cross-over that tied characters like Spawn and Savage Dragon. The connection made is acute. (**Cough, cough…there is a main Spawn character in this story**). “The Nightmare” story is focused on another hellspawn, of the same name of the story’s title. This character would resonate with readers from recent arcs. “The Hero” is a story about a boy and The Redeemer…or is it a story about a child who is The Redeemer? The answer is quite apparent by the end of the story…which leaves the last story, “The Gunslinger”. If you are not aware of Gunslinger Spawn, this is a great story to introduce new readers to this version of the hellspawn. This story rounds out by letting the readers know where Gunslinger Spawn will pick up in his upcoming series, which launches in October.

The artists of each story provide a unique experience for the five individual stories. The showcase element lets the art and the story breathe in their own space, which leaves the reader opening up a world like Spawn’s, which is pretty closely knit. This issue contains annual level comics of material. This issue of King Spawn is absolutely a great starting point for anyone that is interested in the vibes from the upcoming movie, or from recent hype from the issue 300. Old hellspawn fans definitely should jump on this issue. 3.75/5 McFarlane Toy Whiskeys.