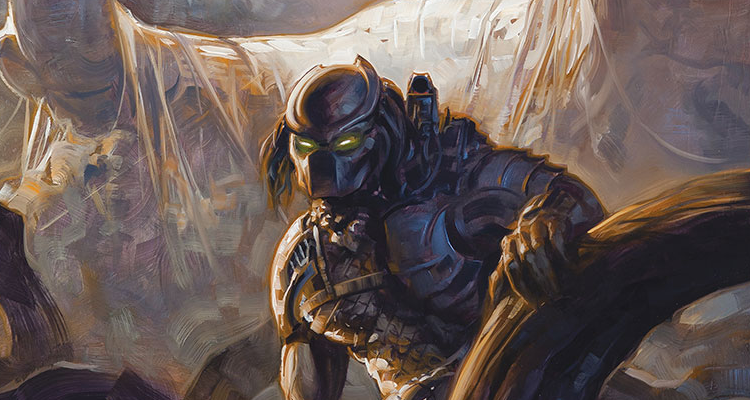 Being one of the older members of GHG I can still remember watching the movie Predator in the theatres for the first time.

Man, was I blown away by this amazing character!

Pred’ was a hunter that had the technology and remarkable skill to be an unstoppable force of terror. And it’s quite geektastic to see how much, after all these years, the franchise has grown. Life and Death #1 takes us right back to the same style, set 40-years following the events of the film, Aliens. The comic.. focuses on a group of Colonial Marines enlisted to help a member of the Weyland-Yutani Corporation prep a planet for colonization. Of course, there are illegal prospectors trying to plunder the planet’s resources. Aliens fans will be psyched when the marines first descend on the deserted colony, with some exciting panels to follow…

Dan Abnett (2000 A.D., Guardians of the Galaxy) turns in a brisk sequence of page-turners, that was unfortunately hollowed by the art of Brian Albert Thies (Star Wars Legacy: Vol 2). While many of his close-ups are decent, detail often ran nothing more than blocks with inside smudges. And although the last couple of pages were great displays of color and gritty violence, it just wasn’t enough to make up for an otherwise pure botch-job.

Still, Abnett’s strange clues in this comic peak my curiosity enough to check out the next issue. There’s Predator action, too. Get some! 3.5/5 Bibles

In this week’s Avengers Standoff, the Pleasant Hill story progresses forward as Maria Hill brings Steve Rogers (who is the S.H.I.E.L.D. commander Head of Civilian Oversight) up to speed about the super prison she has built for undesirables. Turns out Hill has been lying to the world (which keeps it safe) about destroying Cosmic Cube shards, which she has now used to give the illusion of a perfect fucking Rockwell painting instead of a prison. So yeah… a lot going on there. While Nick (Astonishing Ant-Man) Spencer‘s narrative of the story is word-heavy and continues throughout the issue, there are two other subplot that he seamlessly interweaves for both Captain Americas, past and present.

Although the story feels oversaturated, thankfully the art by Jesus Saiz (Green Lantern: The Lost Army) is easy on the eyes with confident, bold primary colors that paint the picture perfectly when you get tired of reading all the bubbles. Overall, the Alpha issue does its job in plot formation and gives us some great moments between lifelong time friends, Steve Rogers and current fugitive, The Winter Soldier. 3/5 Bibles.

“Cardinal” Brooks here, signing the Sunday Parish checkbook to give you a few thoughts on the New 52 landmark 50th ish of Green Lantern. I’m always a fan of a good superfight — Champion vs Champion — so, Hal vs. Parallax delivers in that respect. Artist Billy Tan (Avengers) relays some cool splash panels of Hal’s constructs, while writer Robert Venditti (X-O Manowar) lays the groundwork of big things to come; although, as a #50 issue, it would have been nice to see those things come here. Rather, Venditti’s plot focuses more so on Hal’s family element, which add plenty of heart and levity to the big brawl.

Otherwise, this super-sized issue has very little payoff and actually feels a little padded. Besides the brawl (which is by no means poorly written, mind you), all we get here is potential. The cliffhanger is exciting, with an alternate version of Hal/Parallax waiting in the wings. Bring it on! Tan shows why he has always been a top-tier artist, and Vicente Cifuentes (Batgirl) blends well despite a few inconsistencies. 3.25/5 Power Rings.

Over the past few months, on this very site, I’ve pointed out on multiple occasions just how formualic the Marvel #1’s have generally been. In Black Widow #1, the prestigious Daredevil team of Mark Waid, Chris Samnee and Matt Wilson throw that formula out the window, for both good and ill effect. This issue is as decompressed as a single issue could possibly be, forgoing any real story, plot or character development; instead, giving us a mere escape sequence that’s exciting, action-packed and flat-out looks great on the page. This team is clearly asking its audience to trust that they’ll eventually get around to everything else, but, for now, grab a jetpack, take a leap, and enjoy a superhero spy doing some superhero spy shit. 4/5 Widow’s Kisses.

Never one to let a licensing opportunity go whooshing by, Dynamite Entertainment hits a two-for-one with this series whose premise lives up to its title — which I totally thought was just a joke the first time I read it. What we’ve got here is indeed the further adventures of Ashley James Williams, but as the subtitle implies, this story takes place in a post-apocalyptic near-future that’s tonally reminiscent of a certain recent Oscar nominee for Best Picture starring Tom Hardy (but not the one with Leo and the Bear).

It’s a fun idea for a mash-up, and maybe all that tight-lipped dead-serious action from MAD MAX could stand to be taken down a peg or two by the campy, completely over-the-top ultra-violence that’s been a hallmark of the EVIL DEAD universe for three decades and counting. But Army of Darkness: Furious Road #1 is pretty by-the-numbers, right here. We meet a ragtag group of road warriors racing out of Detroit who dispatch a gang of zombies in due pyrotechnical haste before moving on to the hallowed and now-barricaded S-Mart, where they find our hero with some gray in his temples and not quite as much bite in his dialogue.

Nancy A. Collins (Vampirella) captures Ash’s voice well enough, but she just doesn’t give him any great lines here right off the bat, which you kind of need to do in the first issue. And the entire rest of the cast are pretty indistinguishable from one another, no mean feat, given that we’ve got a werewolf and Frankenstein’s monster in the crew. On the second page, our warrior nun says, “I’ll relax when I’m dead. Not a moment before.” You’ve just got to do better than that. The art by Kewber Baal and Schimerys Baal is serviceable, moving the story along from beat to beat and actually doing a pretty solid job of capturing Bruce Campbell’s likeness, which can be a real derailment for licensed franchises that rely so much on fans’ love of the story’s original medium (Good evening, BUFFY Season 8). Overall, this one really isn’t going to send your hardcore Deadite cackling into the night, but it also certainly won’t hook a casual reader here right away. 2/5 Boomsticks.

Yep! It’s Morphin’ Time! As I read this Mighty Morphin Power Rangers #1 issue, I can almost hear the toaster eject a frosted strawberry Pop Tart — my old afterschool snack back when I wore a Catholic school uniform with Keds. Kyle Higgins (C.O.W.L., Batman Beyond 2.0) is smart to introduce readers to the Power Rangers with a recap of the drama through Bulk and Skull, Power Ranger fanboys-turned-podcasters. This dynamic duo certainly brings a fresh, modern spin to an otherwise age old newcomer drama, in the case of Green Ranger Tommy Oliver. Henry Prasetya (Green Lantern: New Guardians) did a commendable job bringing some anime elements to the story without overpowering the overall story. However, as excited as I was to read about the Rangers, I found myself wanting to read more about Bulk and Skull. That is why, I am so happy that BOOM! decided to end the comic with a 2-page mini called “The Ongoing Adventures of Bulk and Skull.” 3.5/5 Bibles.