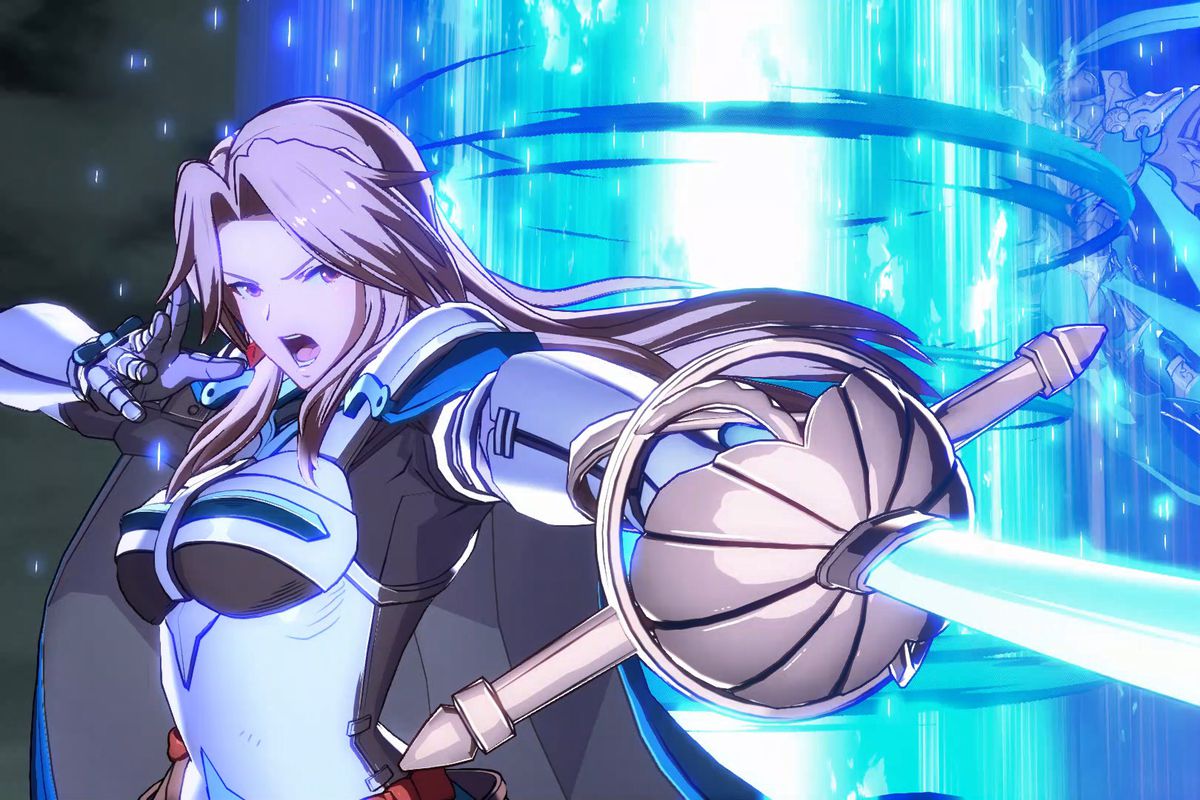 You can never go wrong with Arc System Works. There’s a reason why their games have been smothered all over the likes of fighting game meccas EVO, CEO and.. GVO. In our 3 days of the GodHatesGeeks tourney so far, we’ve spotlighted BlazBlue: Central Fiction, BlazBlue: Cross Tag Battle, Guilty Gear XX Accent Core Plus R, Dragon Ball FighterZ, and the ArcSys co-created Under Night In-Birth Exe: Late [cl-r]. It’s been a pleasure to add the newly arrived Granblue Fantasy: Versus to the recent playoff match-ups and our competitors haven’t shied away from its gameplay intensity…

The first thing you’ll notice with Granblue, of course, are the ultra colorful visuals. They huge anime sprites are remarkable and very much in line with the aesthetics of DBfZ. The 2D on 3D appearance really pops, and the characters are well-designed in deep detail; things may catch your eye during the pre- and post-match cutscene shit-talking, like the rigid material on green leather boots. The background scenery is simple, yet varied. These medieval atmospheres are not quite the stunner found in the haunted classrooms of Under Night, but definitely fit the tone and Granblue aura. You’ll battle on beaches, in forests, on ships, harbor side docks and the like.

Granblue Fantasy: Versus is easy to play. Unlike the recently released Under-Night and many of the other Arc System Works titans, there are no intricate fighting gauges, and commands don’t require technical button moves. If you can perform an Hadouken, you can perform the Skybound Arts supers. Again, GBVS a far more deliberate, slowed down DBfZ without all the screen-ripping tags. There are no annoying auto-combos either. Sure, rapidly pressing one of the attack buttons will issue a quick combo, but that’s in almost every fighting game not named Mortal Kombat.

Funny then, that I found the training mode to be a pain in the ass. It actually digs real deep into making you a better fighter, yet the mode flickers in the way of transmitting that information. Versus‘ training modes make a lot of assumptions. Do that. Do this. But how? How?!? There’s no doubt I was spoiled by Under Night In-Birth‘s super concise, multi-option training modes, so despite not holding hands during these “quests” it’s easy to understand why others are pleased with what Granblue offers here.

Above the traditional arcade, versus and training modes is the intrigue of an RPG Mode. Yup, to this quarantined gamer counting the days until Atlus delivers Persona 5 Royal and Square Enix flies out the Final Fantasy VII Remake (like, really, send these babies out to the “socially distant” and “mentally discombobulated” already!!!), having a fully fledged role playing mode in a fighting game sounded intriguing as hell.

Initially I found the mode to be a half-ass attempt at training; and seeing my quick exit in the GVO Wildcard Playoff (only winning a round or 2 of GBVS action) — yeah — that didn’t help at all. Sure, the bonus rounds of RPG Mode break down the 4 signature move options for each character, and that was definitely appreciated. It was cool to execute all of the varying powers and all-mighty fighter quirks (wink, MHA!), and these extra rounds are critically shorter than the rest. But the mainline narrative is, minus the unique babble-on by our majestic warriors, a mixed bag.

RPG Mode should last you about 9-10 hours. The story is pretty cool, if ultimately an anime trope-filled adventure for your standard brawler narrative (i.e. your friends have all been mind-controlled by an evil power and you must battle to bring them back to reality, yadda, yadda..). But that isn’t the issue. Not only does the side-scroll “beat ’em up” style completely struggle to mesh with the 2D fighting mechanics, it gets awfully mundane (and you can’t change the difficulty until completion). Your selected character will often overlap and be overlapped by your fellow compatriot, and the AI pal will often overshadow your efforts in taking down the slews of boring foes.

Thankfully, the heat ramps up during “Raid” a.k.a. boss missions in the campaign. For the most part those battles are a fun, intense time and provide surprisingly challenge. But after wiping out 40+ stages of mindless enemies, maybe too tough. The longer the story goes, the more epic these fights get, and it’s almost worth trudging through the monotony to get to that empirical endgame. The final few stages feel like an amazing final arc of an anime series, as you’ll battle a series of tough villains, add powerful allies to the mix and, ultimately, enjoy blazing the screen with a surplus of Skybound Arts to the sounds of an extra ramped up score.

In the end, I was happy to get through the lengthy RPG Mode, unlock the final boss DLC for free (trying out Beezlebub should be fun!), and had a blast learning every character in the game, which at 12 (including the boss DLC, with the additional Narmaya available now and Chaos Bringer, Soriz, Djeeta, and Belial all arriving at a later date) can look very nominal, but it’s definitely quality over quantity. Hey, Garou: Mark of the Wolves a.k.a. Fatal Fury 4 is one of the best fighting games of all time and had only a dozen character choices. With games like Street Fighter V: Champion Edition and Super Smash Bros. Ultimate that offer a plentiful number of options at 40 and 76, respectively, your mileage with this matter may vary.

Wait.. before you go, Moody.. what in the hell is a Granblue Fantasy anyway? I hear you. Like many anime lovers here stateside, I never realized the grandeur of Granblue popularity. It’s kind of insane that an IP that huge overseas in the gachapon mobile world (25 million downloads!) is just now tugging at our weebie little heartstrings. But let’s just say.. with Versus‘ addictive ArcSys gameplay mechanics, gorgeous 2D anime, a riveting score, and solid stories to tell, I’m glad it did. 4/5 Granblue Bibles.