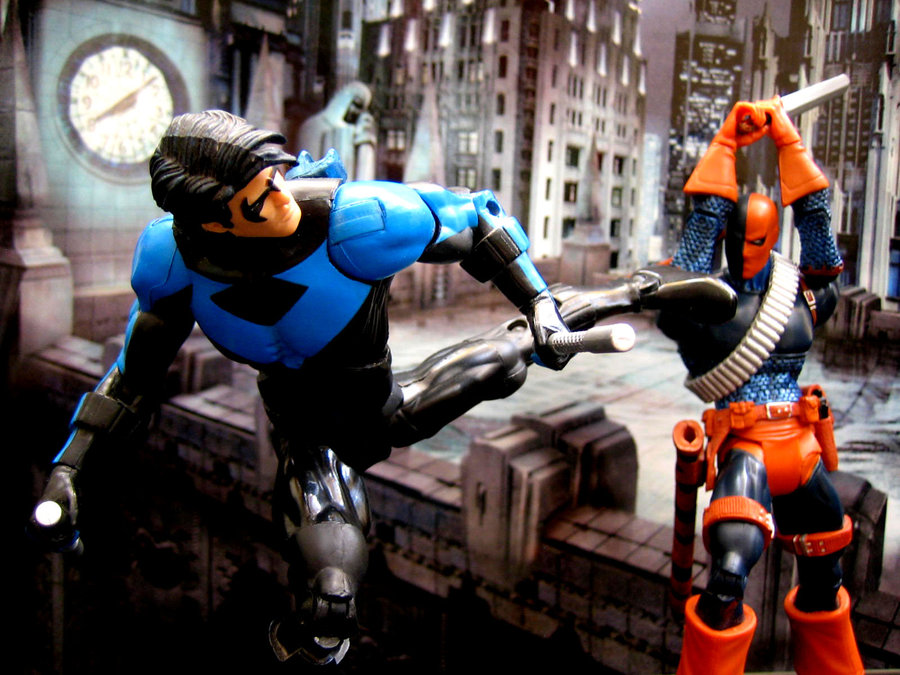 Welcome to a very special Arrow edition of Fistful of Comics— without “The Hood”.

You see, there’s some heavy hitters coming to CW’s #1 show (and arguably the most beloved superhero TV show since Lou Ferrigno painted himself green), so there’s no surprise DC Comics is here to capitalize on the goods. The Vampire Diaries‘ Steven McQueen is rumored to play Nightwing in Arrow‘s forthcoming third season (as the actor himself teased), and, of course a few months ago, fans got to witness a little preview of just what the lovely Suicide Squad can do.

But, that’s all for later. How are the comics? It’s Nightwing’s new identity; an All-New Suicide Squad NOW!; and the return of a favorite futuristic web-crawler; and much, much more.

Grayson… my favorite former Robin has a new #1! And, it’s OK. Not terrible, not great; not like the time when I read Nightwing #1. Now, that was great. I can’t put my finger on why I don’t like the brand new Grayson #1, but that doesn’t necessarily mean it wasn’t a decent first issue.

The New Suicide Squad #1, on the other hand? About as good as any old-band-that’s-not-exactly-the-same-band-with-new-members-and-a-new-manager can get. Secret Six editor Sean Ryan‘s new squad — also now known to their new handler as “Task Force XL” — have added some new members, yet are still kicking ass in familiar fashion. If you couldn’t tell by the cover up above, the new Squad includes Deathstroke (I wish I could get Manu Bennet’s voice out of my head when reading this), Deadshot, Harley Quinn, Black Manta, and… Joker’s Daughter?

More on her in a bit.

Our boy Dick, er– Agent 37 as he’s now called in Tim Seeley (Batman Eternal) and Tom (A Once Crowded Sky) King‘s Grayson numero uno, is under deep cover in a clandestine organization best known for giving hell to Batman, Inc. Oddly enough, the former Boy Wonder now works for Spyral under the request of Wayne, Bruce Wayne (as read in Nightwing #30) and most everyone from his former life believes he’s dead.

Batman had insisted that this mission was essential to their way of life. The hero way of life. Turns out, the leader (maybe) of Spyral is on a mission to find the identities of all the super heroes. As Mister Minos puts it, “with godhood must come transparency. Power cannot be masked.”

With this Newest Suicide Squad, The Joker’s Daughter may have a little say — or should I say laugh — about that quote. She’s easily the oddest contribution to Amanda Waller‘s former ragtag group of assassins; and when you consider that neither Deadshot or Harley are considered “wild cards”, you can see the concern with the fact that Waller is no longer in charge. That’s right, everyone’s not-so-favorite bitch-on-wheels plays second fiddle to a questionable gentleman named Victor Sage, appointed by our trusty government to oversee the project. Ms. Waller is understandably not so happy with all the shake-up, but there really isn’t a clear-cut reason why she’s being dropped from the top.

With Grayson, the bulk of the issue sees Agent 37 and his partner, who happens to be Helena Bertinelli (The Huntress from Arrow), tracking down and defusing a “dangerous metahuman bioweapon.” Apparently, that involves harvesting organs of metas that are being externally controlled. Yeah, whatever they say. The redeeming factor of the issue for me came in the last panel, where it seems Mister Minos already knows the identities of more than one Leaguer… namely Batman and Cyborg. Granted, he’s not entirely sure, but he has them narrowed down to about a 90% accuracy. But freakin’ BATMAN… If he’s figured out Batman’s identity, this dude’s got some juice!

Despite the slow start and some inconsistent (is that Grayson’s new disguise or?), albeit occasionally visually-stunning, art from Mikel Janin (Justice League Dark) and Jeromy Cox (Teen Titans), this Deacon is super-anxious to see where this goes, despite the fact one shouldn’t have to wait for the last image of the last page to want more. But wanting more can also be a great thing, when it comes to New Suicide Squad’s new conflicts. Just watching all of the snickery between Waller & Sage might be enough for me, and you can bet that, along with all of the usual in-fighting within the Squad itself, this “little friendly competition” is that much better to watch via the suitable sketches & vivid colors of Jeremy Roberts (Harley Quinn #0) and Blond (Red Hood & The Outlaws).

Marc Andreyko (Batwoman) reboots this Vampire Comic book tale of Chastity. Set in the 1980s, Chastity Marks and her family yearn for her to be an olympic Gold medalist. However, her dreams  (and mainly her mother’s) are shattered when she lands incorrectly and her ACL is shattered. She turns to reading vampire novels and becomes obsessed! (Sounds like every tween girl in this era…) Upon attending a book signing for her new favorite Vampire novel, she meets the author who offers her a ride home, which is more unrealistic than the vampire turn she makes seconds later. The mysterious underworld of Vampires is now Chas’ reality. My thoughts on the reboot? I think is sucked, literally. The original Chastity had depth and courage, one your Priestess can relate to — not only because I actually went to RADA — since I was that girl who ran away from home when I was 17 and obsessed with Anne Rice. It’s a shame that Andreyko changed the story to be more “fitting for our tweenie vampire age”, yet still in no way is this comic comparable to the beauty of Anne Rice’s Interview with a Vampire series. Kudos to Dave Acosta (The Fallen) for the beautiful visuals, but I just can’t get past Chastity‘s otherwise lack of…bite. 2/5 Twilights.

Spider-Man 2099 takes a futuristic spin on the web-slinging hero, replete with time-travel references — this guy, Miguel O’Hara’, even looks like Marty McFly — and a hologram assistant, Lyla, akin to the like’s of Master Chief’s Cortana. Miguel’s DNA was rewritten after an experiment gone awry, making him Spider-Man in the year 2099. Based on future circumstances concerning the lives of his father and grandfather, he jumps into the early 2000s, the starting period for the family business, Alchemax. The action sequences are entertaining, with a time-traveling adjustor chasing Miguel for most of the book, bent on destroying 2099’s Spidey before something dire happens due to his existence. Liz Allan, an office-mate who is set up as a potential female protagonist/love interest, kind of reminds me of an angry Celine Dion, but should play an interesting foil to Spidey, as she makes it her mission to find out his identity (and the adjuster telling us she is crucial to Miguel’s future development). Will (Superior Spider-Man) Sliney‘s new costume is also interesting, with the spider logo favoring a skeletal appearance that is two-tone and super-graphical– a definite departure from the traditional design. For what my two cents are worth, Peter (X-Factor) David‘s plot is well set-up in this first issue, with the potential for some interesting locales and events to take place thanks to the added element of time-travel (please get on a dinosaur). Miguel is cheeky, and comes off a bit too Peter Parker-ish; not necessarily a bad thing when you’re a fan of Parker, but it’s a new character and it would be refreshing to see a slight variation in personality. I just want to see Doc Brown somewhere now. 4.25/5 Self-Lacing Shoes.

Enjoyment level: UGHH. Unlike the Death Vigil comic that prolongs its life, I was hoping for this to be over sooner. The story and artwork (despite some beautiful pages inside) has a strange clusterfuck of elements that mash like Underworld-meets-Vikings-meets-The Walking Dead-meets-Jurassic Park, with some pirate play involving a talking bird on a shoulder. It was as confusing to read as getting a raging boner during a graphic horror scene of an episode of Happy Friends, and being a chick all at the same time. There’s definitely some girl-power stuff being tried, which is great, but Stjepan Šejić‘s story has a little too much crammed into one volume to deeply connect, keep up, identify, or really get attached. Hopefully the story will slow down so they can flush out the rest. And hopefully our Monsignor never makes me review this comic again. 2.25/5 Twisted Assignments.