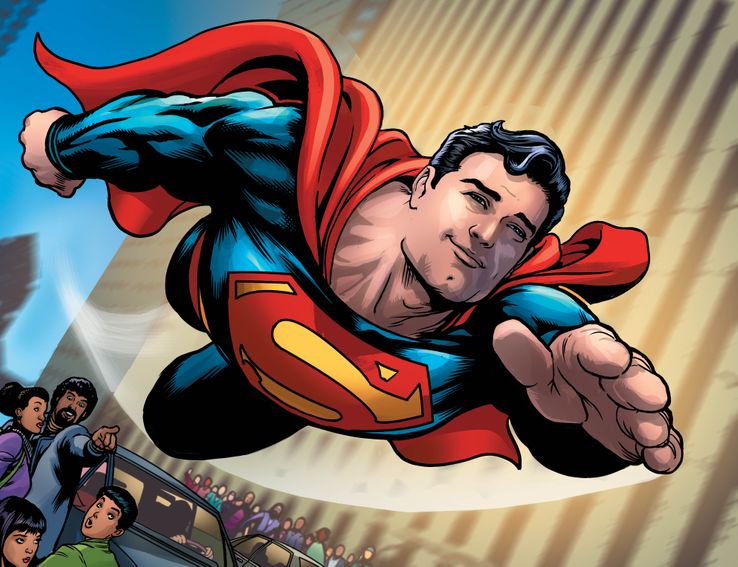 Given the general synergy between the comic book and movie sides of major publishers, it isn’t shocking that less than a week after the release of the Birds of Prey movie starring Harley Quinn they would release a Harley Quinn and the Birds of Prey comic starring the comic book versions of those same characters from the movie. Since they were absolutely going to do that, there’s no better team to take on the responsibility of a female team comic than Amanda Conner and Jimmy Palmiotti.

While I haven’t read any of their recent, extensive work on Harley Quinn, I was a huge fan of their work in the mid ’00s, especially on Power Girl. I’ve always been a huge fan of Conner’s art, in particular. Given all that and the fact that I generally prefer comics as a medium for superhero stories over movies, it is surprising that I wound up not being as big of fan of the first issue of Harley Quinn and the Birds of Prey as I was of the movie. 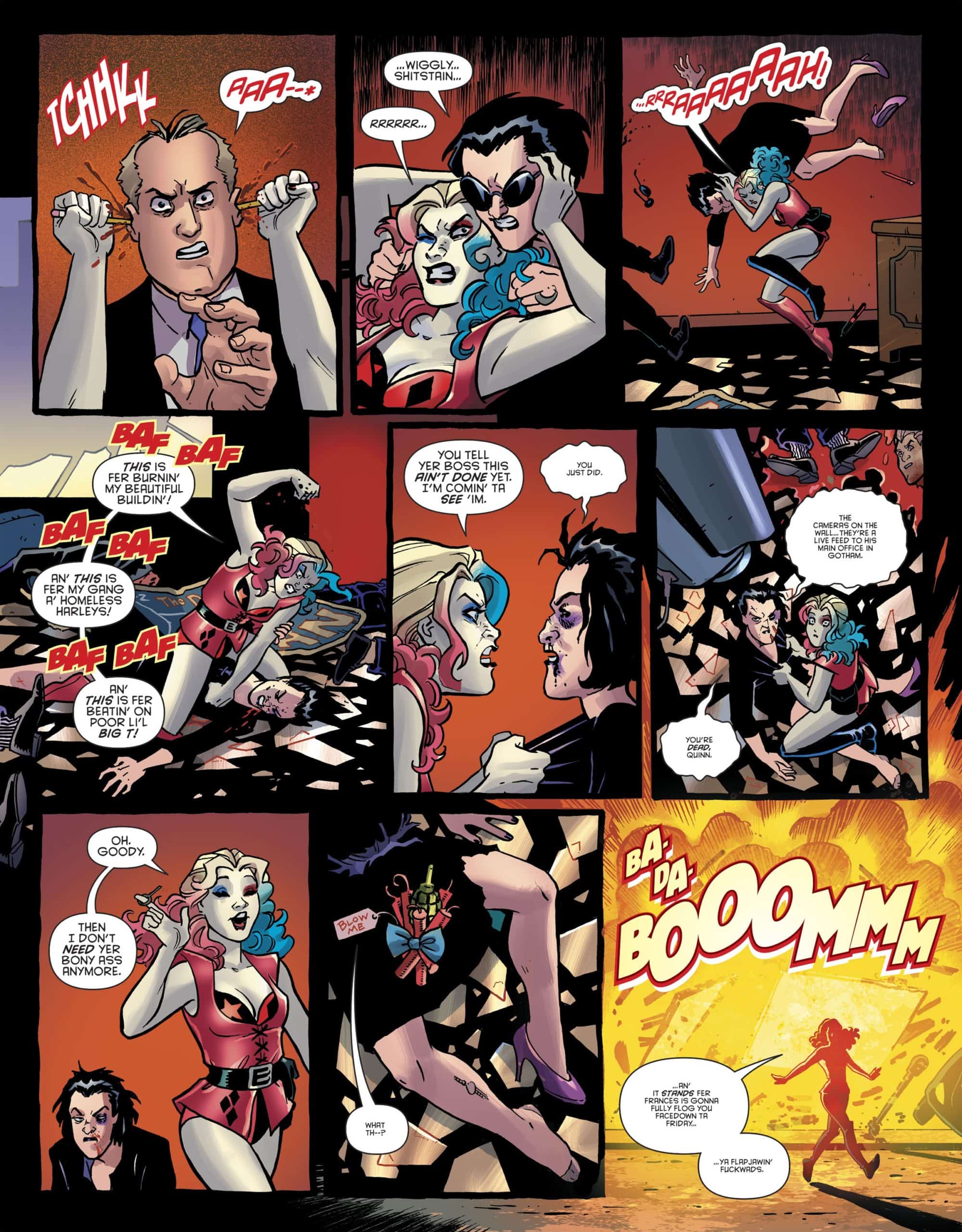 All that isn’t to say it isn’t an excellent comic and that isn’t an absolute breath of fresh air by being a loaded comic with a lot happening in an era of extreme decompression in the industry. Conner’s art work here is fantastic, as always. She does physical humor, especially through facial expressions and background characters, better than anyone and she was absolutely on point here. The story and action are well done and entertaining.

Unfortunately, I’ve reached a point where I’m genuinely kind of bored with Harley vs Joker stories and I didn’t find the other villains interesting at all. It maybe didn’t help that those villains were mob goons in a similar vein to Black Mask’s goons in the movie, but Chris Messina and Ewan McGregor weren’t there to elevate the entertainment value. Given that this is just the first issue, this story could wind up being great, but for now the lack of an interesting villain to complement the entertaining Harley Quinn, exciting Huntress and Cassandra Cain, and Renee Montoya, who only just appeared at the end of the issue, does diminish my overall enjoyment of this comic.

It feels like I’m being overly harsh here, considering I genuinely liked it, but unfortunately, it’s almost impossible not to compare it in terms of enjoyment to the movie that it’s, in some ways, modeling itself after, and it does fall short in that respect. 3.55/5 Harlequins.

As someone whose primary comics consumption consists only of a particular selection of Japanese manga (a little fantasy, sometimes shonen, nothing risque), I still found a lot to enjoy about Gwen Stacy #1.

I’ve seen all of the Marvel films, and have heard tell of some of the past comics, so it’s not like I’m a complete stranger to the character. I appreciate what they are trying to do, to build a backstory for a comparatively minor fan-favorite character. I know enough to get that little intended thrill out of a number of references to other Spider-Man plot threads and characters over which true fans will salivate. She’s smart and strong-willed, a positive female role model for our progressive times. 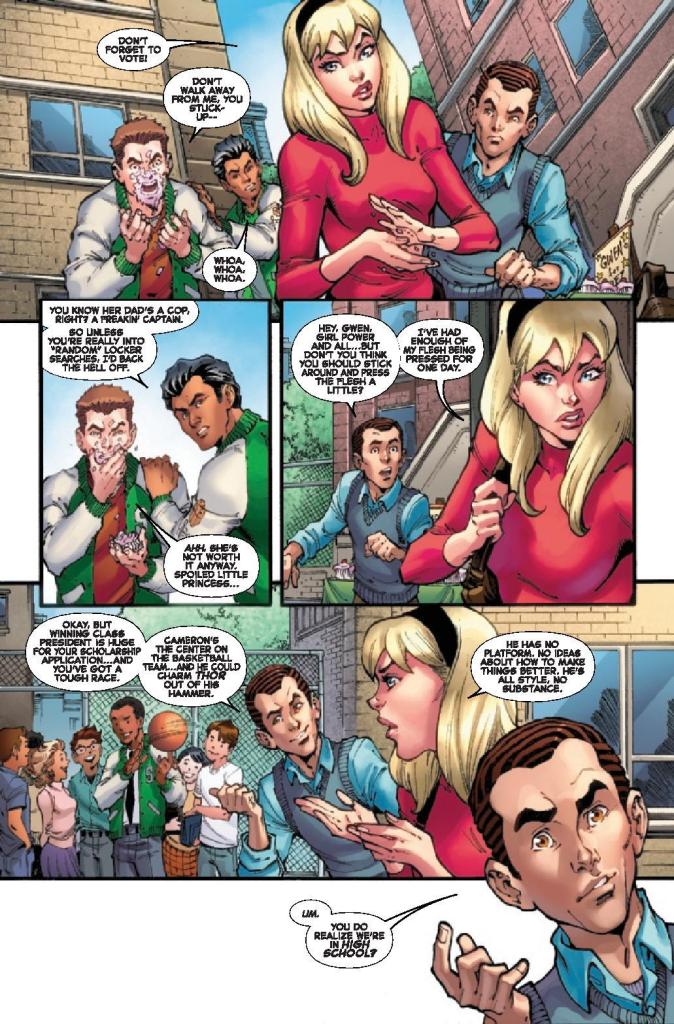 Her most important relationship is with her father, a relationship dynamic we see far too little of in popular media. Writer Christos Gage has a keen knack for dramatizing that dynamic really well, and making it sound true. So far, the proposed story of how she will wade into the criminal underworld to prove her falsely accused police chief father’s innocence is intriguing. I’m excited to see what Gwen achieves and how her story ties into the existing Spider-Man comics.

That doesn’t stop me from still being just a little skeeved out by how sexually suggestive artist Todd Nauck has drawn her, even as a minor high school student (the mini skirts, the skin-tight sweaters, the exaggerated, posed way she sometimes stands that male characters simply do not), but alas, such seems to be the way with Marvel comics. 3.75/5 Bibles.

I went into Nebula #1 (by writer Vita Ayala, and artists Claire Roe and Mike Spicer) expecting the good Nebula of the recent Marvel movies. I was very, very wrong, with Nebula threatening to blow the head off a child within the first couple pages. While the story it starts telling is interesting, the comic immediately breaks the rule of “show, don’t tell” by giving Nebula massive amounts of exposition that even a machine hybrid would think excessive.

The art style also made it tough to exactly follow what is happening in several key moments, or at least HOW the action happened. As a setup, Nebula #1 does its job. But it covers too much ground too fast and too incoherently to be much on its own. At least Nebula herself never ceases to entertain, even (or especially) at her most evil. Hopefully the rest of the series makes up for this middling introductory issue. 2.5/5 Bibles.

Clark Kent is Superman!? Obvious to us readers, but to the civilians in Superman: Heroes, it is shocking news! In this comic you get a look into the life of Superman on the day that he reveals to the world his real identity. My favorite part is the commentary we get from the members of the Justice League regarding whether they think that it is a good or bad idea. You also get some great, touching moments in Super-Clark’s personal life mixed in with some classic Lex Luthor evildoing. We get a great, touching feel for how Superman’s “coming out” affects the rest of the heroes of the DC universe, and it’ll be interesting to see how the villains react to the news.

No, no; Raphael from the Ninja Turtles is not cosplaying as Spider-Man again; instead, it’s Spidey turning into a Hulk. Bruce Banner wakes up in the middle of a crater, in Tribeca. However Banner does not feel the Hulk within him. Plus, it’s night time; he should be transformed into the Hulk but he’s nowhere to be found. Suddenly, Friendly Neighborhood Spider-Man pops up on the seem just as disoriented as his Spidey sense goes wild. Looking around paranoid for the invisible threat that has his Spidey sense going crazy, he soon realize the threat is him and transforms into a Hulk himself.

Confused and enraged, Spider-Hulk screams out Osborn and heads to Norman Osborn’s building, so Banner calls on the Fantastic 4 for help. First they have to calm Spider-Hulk down; luckily The Thing gots that covered. Eventually, they end up finding out who took the Hulk out of Banner and into Spider-Man through Supernatural means. However, they realize it’s gonna take science transfer the Hulk back. Which brings me to my favorite scene where Banner gets a pleasant surprise at how intelligent Spider-Man really is? All and all this was a fun one shot from Tom Taylor for the Immortal Hulk and the art from Jorge Molina was especially superb. 4/5 Bibles.