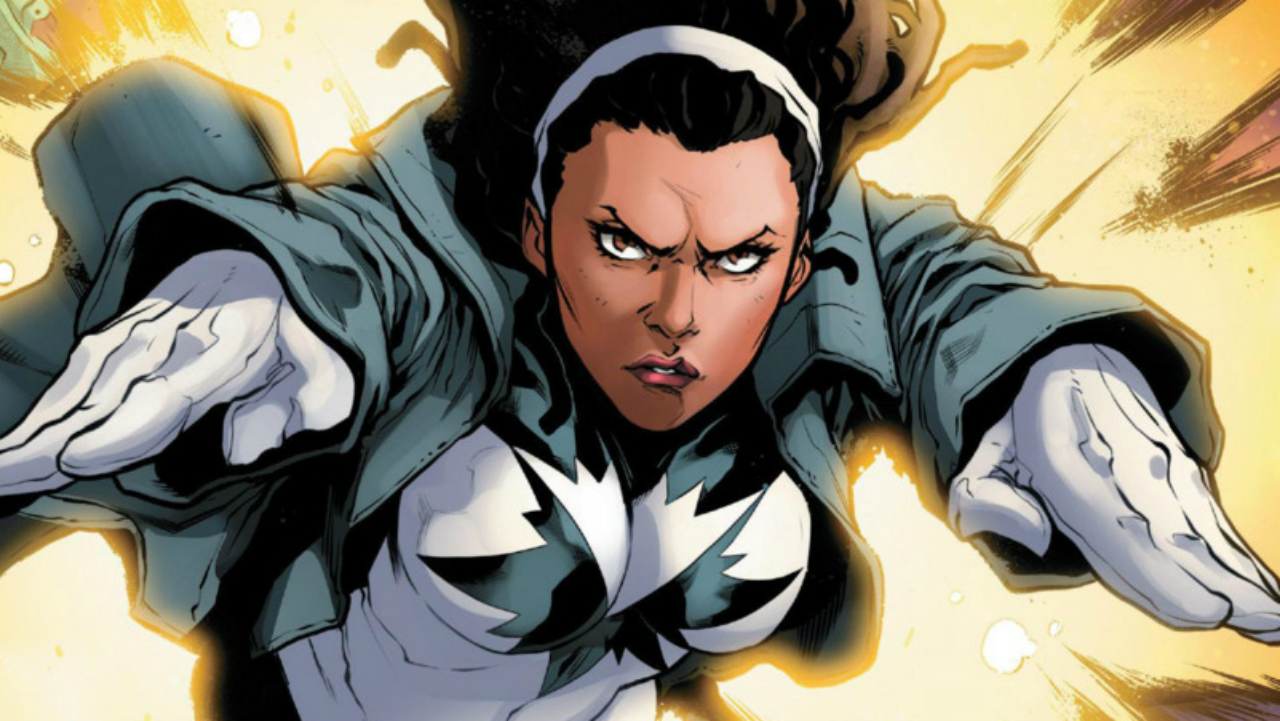 As I’m writing this article, I realized I was also unintentionally making a new chapter to an earlier series I did for GodHatesGeeks: THE SAGA OF CAPTAIN MARVEL (There’s more in the Belser-Verse section on this website! You’ll dig it!). Contrary to popular belief, Carol Danvers is not the first female have the mantle of Captain Marvel. That title goes to the second Captain Marvel, Monica Rambeau. After her brief appearance in the recently released WandaVision trailer, I figured this to be the perfect time to do this deep dive. Enjoy!

Monica Rambeau was created by writer Roger Stern and artist John Romita Jr. Though Romita originally based the character’s features of on actress Pam Grier, her look was altered right before her debut:

“I just took some reference on Pam Grier, because I always loved her, and at the last moment somebody said that, “Well, we need to use this woman, here,” because they thought maybe Pam Grier wasn’t as good-looking as the model they found. It was fine, because by the time she got done by other artists, it ended up looking like the generic black character, anyway.” (2020, Monica Rambeau, Wikipedia.).

Rambeau was a lieutenant in the New Orleans harbor patrol. While moonlighting as a cargo ship captain, she aided a scientist in tracking down an international criminal, who created an experimental energy disruptor weapon. When she tries to destroy it, Monica was exposed to energies described as ‘extra-dimensional’.

A body-wide charge altered her molecular structure. She discovered she now has the ability to turn herself into different forms of light energy. She then used a Mardi Gras costume to disguise herself and she began to fight crime.

After being named Captain Marvel by the public, she operated under that moniker for a bit of time. It wasn’t until she encountered Ben Grimm of The Fantastic Four that she was told of the hero that originally used that name: the Kree superhero Mar-Vell who had recently passed away. Learning of Mar-Vell’s legacy, she initially wanted to no longer use the name. Grimm reassured her by saying “Marv wouldn’t mind. I probably ain’t the only ‘Thing’ in the world either”.

Early in her career, her abilities were growing out of control. She went to New York to get the help of The Fantastic Four’s leader, Reed Richards. She instead met the web-slinger Spider-Man. Spidey then introduced her to the Avengers. Iron Man was able to assist her by using his armor to stabilize her energy levels. What she did not realize is this meeting would set Monica on the path to become the first African-American woman to be an Avenger.

While in lightning form, she made contact with the water and conducted herself across the surface of the  entire ocean! The resulting dispersion spread her atoms so widely that she barely regained physical form. She eventually reformed as a weakened, withered husk of herself with no super-powers. She had to retire from The Avengers and superhero life in general for a time in Avengers #294 (Aug. 1988).

After her original Avengers stint, Monica regained her powers and received two one-shot titles in 1989 and 1994 (both written by Dwayne McDuffie and illustrated by Mark D. Bright). She would make a return to The Avengers( as a reserve member) with appearances in The Avengers vol. 3 issues #1–59, Avengers: Infinity #1–4, Maximum Security #2–3, Thor vol. 2 #30 and the 2001 Avengers Annual.

In the early 90’s, Marvel created Genis-Vell, son of the original Captain Marvel, Mar-Vell. Genis was artificially created from his father’s DNA after his death by Mar-Vell’s lover, Elysius. Genis was designed to be a 90’s Gen-X version of Mar-Vell, having his father’s powers and wearing a hip, updated version of his father’s original suit.

NOTE: this story is eerily similar to the Superboy clone from the “Death of Superman” storyline.

Genis did not have the maturity to carry the burden of his father’s legacy. In fact, Genis actually started using the Captain Marvel name while Monica was still operating as Captain Marvel herself. During 1996’s Avengers Unplugged storyline, Monica gave the Captain Marvel title to Genis, taking on the new codename Photon.

Later, Genis-Vell underwent a period of mental instability. He no longer wanted to use the Captain Marvel name due to a number of questionable actions on his part (and it was taken from him by his mother and his sister, Phyla-Vell). On a whim, Genis joined the Thunderbolts in 2005 and he wanted a new name: Photon (which he took from Monica again). Monica decided on another new codename of Pulsar.

Monica  just went by her own name as the leader of Nextwave in the 2006 limited series Nextwave: Agents of H.A.T.E. Lasting only 12 issues, this comedy series by Warren Ellis shows Monica as she leads a team of obscure Marvel heroes like Elsa Bloodstone, Machine Man, and a new character called ‘The Captain‘. One running gag was that the team would occasionally refer to Monica  as ‘Auntie Monica’.

Since September 2013, Monica has appeared under the new codename: Spectrum. She became one of the lead characters in the relaunch of Mighty Avengers and she was part of the 2015’s Ultimates team consisting of Black Panther, Blue Marvel, Miss America, and the newest Captain Marvel, Carol Danvers.

Monica Rambeau and her mother Maria both appear in the 2019 MCU film Captain Marvel, starring Oscar winner Brie Larsen as Carol Danvers. Both members of the Rambeau family split a number of characteristics lifted from the comic book version of Monica Rambeau.

For the upcoming television Disney+ series WandaVision, the now adult version of Monica Rambeau will be played by actress Teyonah Parris. No official description of the character has been given at the time of this article.

The trailer for WandaVision shows that Monica will appear as an agent of the newly formed security agency S.W.O.R.D. (and possibly gain her powers in the series). With this, the future definitely looks bright for Monica Rambeau and it has been long, long overdue.