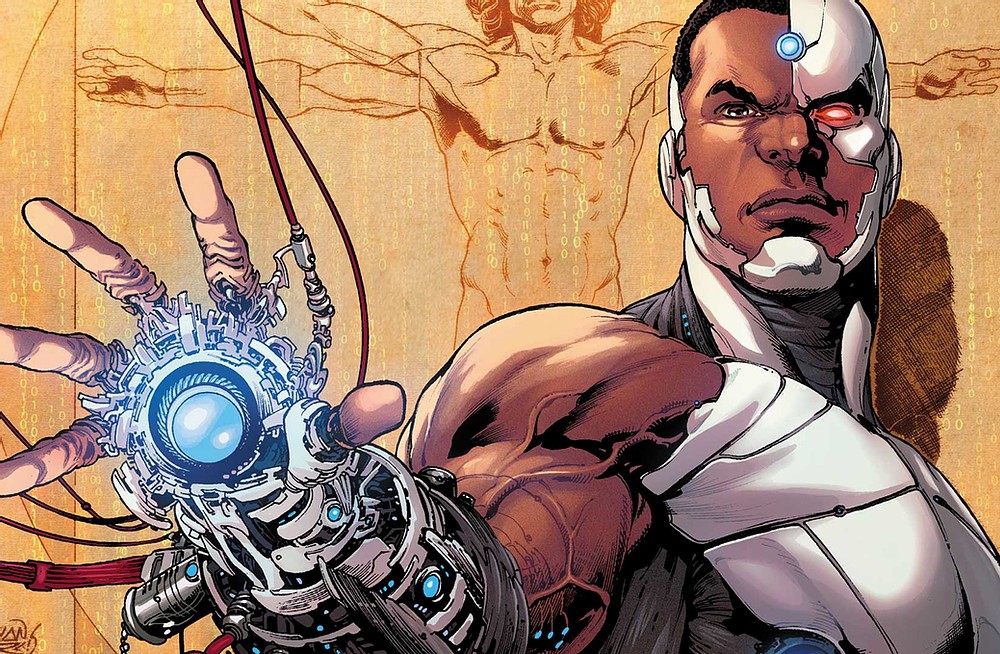 Part Man! Part Machine! All Hero! No, I’m not talking about Robocop (but it’s damn close). Today’s article is about a young wonder of science who has forged his own path to become one of the most prominent black superheroes out there right now: CYBORG!

Victor Stone is the son of scientists Silas Stone and Elinore Stone. As a young boy, his parents use Victor as a test subject for various intelligence enhancement projects. While these treatments were successful and Victor’s IQ subsequently grows to genius levels, Victor grows to resent his parents for using him as a guinea pig.

Victor strives for independence, engaging in pursuits of which his parents disapprove, such as athletics. Victor’s life is forever changed when he visits his parents’ lab while they try to access another dimensional. At that moment of his entry, a hostile gelatinous creature was accidentally pulled through and attacks them. Victor’s mother is killed by the creature and Victor himself severely injured before his father was able to send it back to its native dimension.

However, Victor’s heroic side came into prominence when an old friend of his, Robert Evers, tried to manipulate him into participating in a terrorist attack on the United Nations. Victor decided to equip himself with his weaponized attachments and stop Evers on the top of United Nations Headquarters.

The new storyline takes place five years in the past and features Victor ” Vic” Stone appears as a high school football star who is heavily sought after by a number of college scouts, but has a distant relationship with his father, Silas. After winning a big game, Victor calls his father and angrily telling him that he broke his promise and missed yet another one of his games.

Later, Victor appears at S.T.A.R. Labs where his father and other scientists appear to be working on a Mother Box from Apokolips that Superman came in contact with. Victor has another argument with his father and tells him that many college scouts were at the game to give him full scholarships . When asking if his father will ever appear at any of his games, his father coldly replies “No.”

Silas, along with Dr. Sarah Charles, and T. O. Morrow go in “The Red Room“, a special room in S.T.A.R. labs which contains every piece of exotic technology from around the world. Silas attempts to treat Victor with something that has never been attempted before. Silas injects Victor with experimental nanites and has Dr. Morrow put various robotic pieces on Victor including:

He sees himself for the first time with his robotic parts and is panicked by his new body. Suddenly, Parademons burst into the red room and leap toward Sarah Charles.

Soon, Vic sees a woman being set upon by a group of Parademons. He leaps to the woman’s aid and Vic inadvertently absorbs some of the Parademon’s components giving him access to Boom Tube technology.

It is soon discovered that the energies from the Mother Box are incorporated into his new form. This allows Victor to access the vast New Gods data library and discover Darkseid’s true invasion plans. Vic is able to reverse engineer the alien boom tube technology and teleports all the invading aliens including Darkseid off the planet, saving the Earth. With this act, Vic helps to found the Justice League, adopting the code name Cyborg.

Cyborg’s origin on the series was told via a medical journal read by Dr. Martin Stein saying Cyborg was a promising decathlon athlete until an accident destroyed most of his body and his father replaced part of his body with machine parts. Cyborg mentors handicapped children with prosthetic limbs like in the comics and has been using his abilities in secret due to his low self image. He becomes fast friends with teammate Firestorm due to their similar age.

Cyborg debuts in the episode, “The Seeds of Doom“, when he stops a plot by Lex Luthor using a giant mechanical spider. Luthor is embarrassed by his defeat at the hands of ‘a teenage Tin Man‘. The victory impresses the Super Powers Team (in particular, Wonder Woman and Firestorm). Cyborg abruptly leaves and Superman explains that Cyborg has been offered membership a number of times only for him to refuse.

Cyborg’s abilities help save Earth from the monster seeds of the villain Darkseid. Superman warns that Cyborg has made a dangerous enemy in Darkseid. With encouragement from Firestorm, Cyborg finally accepts the offer and becomes a valued member of The Super Powers Team.

Cyborg’s first live action appearance was in the WB/CW series Smallville, which followed the life of young Clark Kent on his journey to becoming Superman.  Vic debuts in the 15th episode of the fifth season, entitled “Cyborg”.

Played by the late Lee Thompson Young, this version of Victor is a former wide receiver for the Metropolis High School football team who played against Clark Kent (who was the quarterback for Smallville High at one point). He is involved in a car accident that kills him and the rest of his family. However, scientists at a tech company called Cyntechnics began to do cybernetic experiments on humans. Vic’s body was found and is secretly rebuilt by Dr. Alistair Krieg.

Of a group of test subjects, Victor was the only one to survive the experiments. Locked up in a secret facility, Victor escapes captivity and has a full-on vehicle collision with Clark’s girlfriend Lana Lang (he is unharmed; she is injured).  Soon, Cyntechnics was bought up by Lex Luthor who wants to turn Victor into a mindless drone.

Victor never referred to by the name “Cyborg” in his first appearance. Instead, Victor refers to his enhancements as “bionic” as the episode explicitly references the 1970s television series The Six Million Dollar Man. The final shot of the show has Victor reuniting with his girlfriend Katherine.

Victor returns in the Season 6 episode “Justice”, which features Green Arrow gathering together a group of past allies who have encountered Clark Kent to combat Lex Luthor.

In this episode, Victor finally takes the name “Cyborg”, as Green Arrow’s team uses code names. Victor also explains that his mechanical parts put a strain on his relationship with Katherine. After their break up, Victor states that it was Green Arrow who kept him from committing suicide.

Cyborg was one of the main characters on the Cartoon Network animated series, Teen Titans. Voiced by actor Khary Payton, this version of Cyborg is very similar to his comic book counterpart. His nickname is ‘Cy’ and, like most of his teammates, he is never referred to by his given name. However, he does take the alias ‘Stone’ (based on his real last name) in the Season 3 episode “Deception”.

Cyborg is the Titans’ chief technician and gadgeteer. He is responsible for the construction of Titans Tower’s electronic and security systems and the team’s main vehicles. His most dominant personality faults featured in the series are his enormous appetite and a tendency to be overly vain about his work.

In “Deception” it is revealed that he never had a chance to finish high school due to the circumstances that made him what he is. The only time Cyborg’s personal history has been discussed is in “Deception” in which he discusses his involuntary cyborg status with Starfire.

NOTE: This series establishes Cyborg’s catchphrase ‘ Boo-Yah’, a phrase made popular by the late Stuart Scott on ESPN SportsCenter. Every subsequent multimedia version of Cyborg  has used the catchphrase including Ray Fisher in Justice League.

Stay tuned for the second half of Cyborg’s legacy next week!