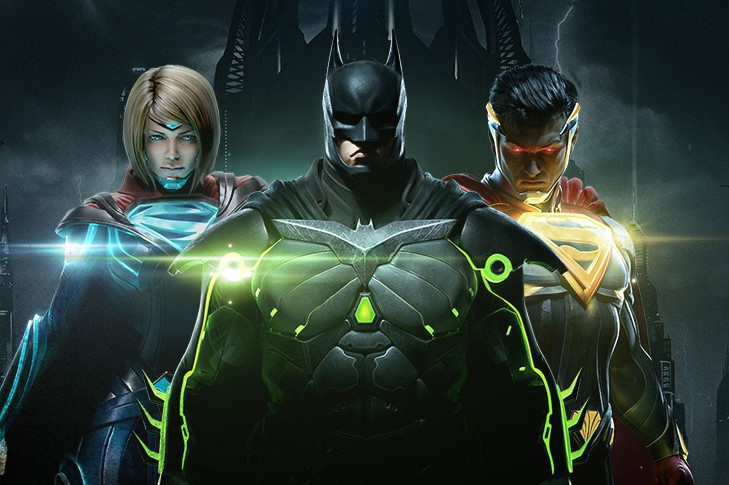 Injustice 2‘s single-player story campaign may be the best Batman V Superman movie yet. And that’s not a terribly difficult attainment, considering that most folks (though certainly not yours truly) lambasted the last time these two iconic super titans squared off. In the sequel to NetherRealm Studio’s DC Universe fighter Injustice: Gods Among Us, everyone’s end-game is a mostly clear-cut scenario. That makes this Elseworlds tale where the Man of Steel is a dick-heel more appreciative to traditionalists, you know, people who prefer Richard Donner’s Superman and a Birdman Batman over The Dark Knight.

In fact, Injustice 2 takes what Zack Snyder left on the Dawn of Justice table and pushes all his music video-inspired outlandishness tenfold, and — since it’s a fighter vs. fighter-centered video game — it all works. The narrative gives the player plenty of choices to make, such as: do you counter Gorilla Grodd with the chill, distant dexterity of Green Arrow, or surging, sonic vocals of kung-fu Black Canary? Take down the Spawn-on-steroids Bane with the combo-killing Catwoman, or the Raiden clone-gifted abilities of Black Adam? That added replay value in a fighting games is something of a rare commodity. There aren’t too many games where I’m willing to repeat a 12-chapter campaign (not even the stellar Mortal Kombat X), or read an entire prequel comic book run (via Tom Taylor) to get even more of a fleshed-out story, but the game’s alternative paths and downright gorgeous cinematics have done just that.

Hell, I’ve only found a pair of minor annoyances throughout my near week-long playthrough. The default medium difficulty is far too easy for this seasoned fighter, but notching it up to hard was fun but frustrating when trying to swoosh through the lengthy five to 7-hour campaign. Game difficulty sliders (ala NBA 2K or Madden NFL) would be nice. I also, sadly, didn’t come across much traversing through stage environments, unlike the original 2013 Injustice where it seemed to happen in every match. Otherwise, Injustice 2 offers the best single-player fighting experience since Street Fighter II on the Super Nintendo, much in thanks to the money voice acting (The Walking Dead‘s Khary Payton as Cyborg; Star Wars Rebels‘ Vanessa Marshall as Black Canary and Steve Blum as Hal Jordan, respectively; and, seeing the placement of a few JLU animated series noteables, Kevin Conroy as.. himself, The Batman) and its uncontrollable depth.

With all roads completed in campaign at 100%, Multiverse Mode is where I find myself habitating in that sea of depth. It’s a land of sporadically placed fight modifiers and lots of super loot boxes and XP that allows the player to augment their favorite hero and villain’s health, defenses, abilities and strengths. The upgrades you acquire through the Multiverse are also akin to Grant Morrison’s diabolical thought process of alternately strange and infinite earths, providing a combination of gear upgrades both in armored power and aesthetics (adding hoods and helmets, accentuating capes, altering logos). Want to give Diana Prince a sword to go along with that Lasso of Truth? Make the Justice League’s Cyborg into an evil Grid terminator? Turn Green Lantern into a black man with the voice of Phil LaMarr (MadTV, Afro Samura)? There’s endless hours of reliable and tight-looking garb and shade customization to be had.

That all sounds well and dandy, but what about the fighting itself? Injustice 2‘s biggest improvements come in the form of defense. There are several new, innovative ways to evade (new air and roll escapes), counter (players can now block interactive environment weapons) and recover (bounce cancels). And while much of these new additions may take n00bz some time to practice, even the most button-mashing “casul” will appreciate these highly noticeable additions. Combos are also very easy to learn, and feel seemlessly rewarding. Catwoman is a savage. Blue Beetle is a Wolverine. And Supergirl is a damn near cheat code. I’m also a fan of what they did with the supervillain bosses, Darkseid and Brainiac, making them both righteously “rage-quit” powerful. A couple strong attacks from the green-Ultronesque alien android, and you’re toast.

In all, there will be cynics who heavily despise the new character duds (the same nerds who hated Jared Leto Joker are guaranteed to hate this Clown Prince of Crime even more) and wished for more than one powered-up super move (after 3-4 times, seeing the same fight-interrupting cutscene can get stale). Those small nuances aside, the fight roster is beyond deep and satisfying to current DCU happenings from the panels on the page, silverscreen and The CW. Swamp Thing! Doctor Fate! Atrocitus, with Dex-Starr! Argh!

Better, Multiverse Mode takes that depth and everything you love about the DCU–both in single and online multiplayer–and turns it upside out on its 52 differing Earths, providing countless hours of random and seasonal(!) challenges and rewards. It’s MKX‘s Living Towers, but deeper and wackier. Just think of it as your own personal, Super Sandbox of progressive loot and accessory. Throw in the gratifying “Dawn of Injustice” story-mode and much faster, more fluid zone-leveled combat, and there’s more than enough reason to come back to Injustice 2 for plenty of 2-3 round beatings–even if your beloved Superman is a super douche.

WBIE/NetherRealm’s Injustice 2 is in stores now on Xbox One, PlayStation 4, Android and iOS.