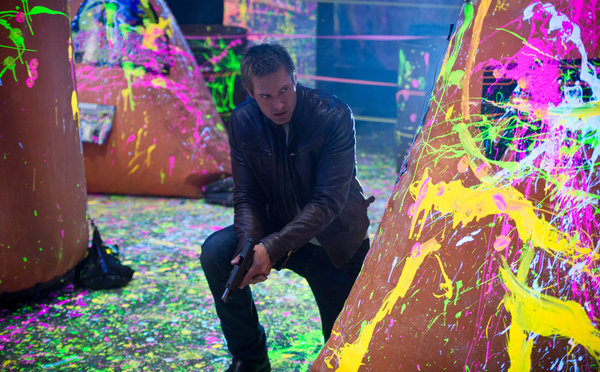 Alright, now here we go! It’s the first new “geek” show of 2014 to get excited about. Everyone ready?!

When I first heard about Intelligence at last summer’s San Diego Comic-Con, the Divine one couldn’t help but get excited for Josh Holloway‘s (Sawyer from “LOST”, but everyone knows that) return to TV. But, unfortunately, the actor would have been more “intelligent” to wait.

Intelligence is about Gabriel Vaughn (Holloway), an intelligence agent who’s been implanted with a microchip that allows him instantaneous access to all information. All he needs is Wi-Fi, cell lines, satellites, etc. and everything from arrest records to bad high school yearbook photos on social media can trick up this one man’s mind. Sorta remind you of the premise for the highly-anticipated 2014 video game, Watch_Dogs? Hell yeah! Moving forward, our government feels that such an important resource needs protection to ensure his safety. In comes Agent Riley O’ Neil (Meghan Ory, “Once Upon a Times’s” Red Riding Hood), assigned to accompany Vaughn on all his missions.

About that premise… A very valuable, one-of-a kind resource that the government wants to keep safe assigns…one woman?! I’m not being sexist, congregants; it’s the plot. I know budget cuts are tough right now but, huh? All that needs to happen.. is for Vaughn to get attacked by a group of 3-4 — or more — baddies and they’re outnumbered! Oh! Not really a spoiler, here, or anything, but let’s just say this theory gets proven right away in the first episode. And not once, but twice! Shouldn’t they at least assign two agents at the very least? Sure, there’s talk about Vaughn being Special Forces and all, but he’s still human — as opposed to “Almost Human” — and certainly no Steve Rogers.

More baffling than the plot of “Intelligence”, perhaps, though is the performances. In addition to Holloway and Ory is Marg Helgenberger (“CSI”) who plays their boss. There’s no doubt the three of these actors are talented, and have all had success with previous shows. Not sure where that went! The characters in this particular pilot walk around like a bunch of cut-out paper dolls with moving mouths. Holloway doesn’t offer half as much charisma as Sawyer, going more for the “serious soldier”.

Dolph Lundgren he is not.

O’Neil and Vaughn also have as much chemistry as two high school lab partners forced to work together. There is one scene where some sparks flew, but, sadly, the Divine one had already checked out by then.

“Intelligence” does offer some cool “geek out” moments, however. Vaughn is basically able to be a walking computer, with beyond invaluable resources to complete his missions. A far more serious “Chuck”? For a CBS show, many of the CG moments, like Vaughn’s virtual evidence board, are pretty rad. These moments are described as our protagonist walking through his own mind of information. There’s also a subplot about Vaughn’s quest for his deceased wife who was supposedly a traitor to the U.S. — and, of course, he still believes she’s alive.

This being said, Tuesday night’s experience with CBS’s latest sci-fi offering was a pilot, and, believe it or not, sometimes the pilot is actually the worst of the bunch. Only the most die-hard TV buffs would give a couple more rounds, and that’s what I’m willing to do, despite “Intelligence” offering no more than an international espionage tech coverslip of “Macgyver” and “NYPD Blue.”

There are smarter choices to make.