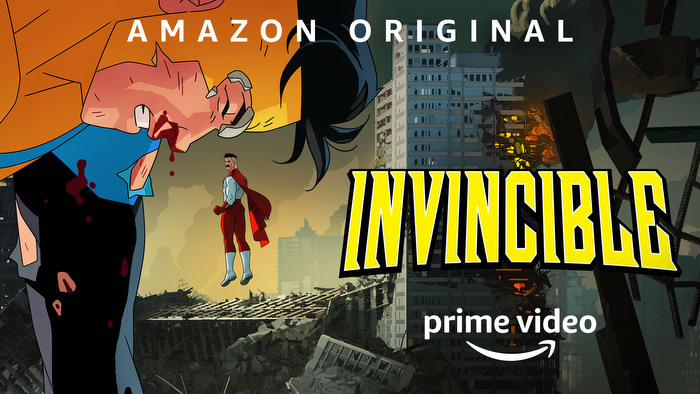 Without ever reading the Invincible comic, it’s impossible to compare Amazon Studios’ new adult animated series to its source material. It should be at least somewhat comforting to know that Robert Kirkman, co-creator of the comic book, is an executive producer on the show. Also Seth Rogen and Evan Goldberg, the guys responsible for bringing Preacher and The Boys to our TV and computer screens are also involved as executive producers. The franchise is in more than capable hands. This review covers the first three episodes of the Invincible TV series.

Looking at screenshots for Invincible, the series looks to be similar in style to the animated DC films and TV shows. However, Invincible seems to have a much higher budget. This first season of Invincible is eight one-hour episodes (they’re technically around 45 minutes) and it’s much more mature than most animated superhero programming.

Invincible could probably be compared to the new Harley Quinn animated series, but the humor and action is much more balanced. Invincible also utilizes CGI when portraying an army of sinister aliens or to illustrate massive destruction. At times, it’s slightly noticeable but it blends fairly well with the more traditional style of animation the rest of the show uses. Invincible’s flying sequence in the second episode when he first encounters the Flaxans as he’s dodging lasers mid-flight is so crazy impressive animation-wise.

The story of Invincible isn’t all that groundbreaking for a superhero concept. Mark Grayson (Walking Dead‘s Steven Yeun) is a 17-year-old high school student whose dad Is Omni Man; a powerful superhero who can do just about anything. Mark has been waiting his entire life for his superpowers to kick in and they still haven’t. He’s bullied at school and the girls his age don’t notice him. The possibility of him eventually being something extraordinary is all he has.

But what makes Invincible special is everything in between its life threatening battles. Its adult content is worth addressing, but Invincible is all around just fantastically written and expertly acted. Invincible is about Mark coming to terms with his newfound powers and what he has to go through to become more refined as a hero. Omni Man (J.K. Simmons) is like the Superman or All Might of the series with Mark idolizing him and wanting to be like him.

You find yourself invested in every conversation in Invincible. Omni-Man, or Nolan, has a ton of wisdom to pass down to Mark. Mark is such a late bloomer when it comes to developing his powers that Nolan never expects him to get them at all. His demeanor completely changes once Mark becomes a superhero.

There’s a lot of humor in the series, as well. Omni-Man’s peeing your pants on purpose speech is a classic as is Mark threatening to get the spray bottle to dowse his parents who are on the verge of intimacy. The action in Invincible is jaw dropping and superb, but the series also covers self-doubt, a fear of change, meaningful heart, and parental advice that really hits home.

Invincible doesn’t really jump into gory territory until the very end of the first episode and then it just totally lets loose. There’s a crazy bloody head squish, guts and teeth that splatter onto the walls and floor, necks being snapped around the wrong way, graphic decapitations, and severed eyeballs staring back at you. It feels like the show makes you earn that gore and it’s all the sweeter because of it. All of the Invincible episodes have something after or during the end credits, but they never make you wait long to see what they have in store.

Invincible is so freaking good that it’s going to be difficult anticipating new episodes on a week-to-week basis. Its brutal action is mesmerizing, but Invincible has so much heart and meaning behind those punches that the show leaves an impact even when it isn’t throwing blood and severed limbs in your face. The voice acting is top notch and the story leaves you on the edge of your seat. Invincible has the potential to be one of the greatest animated superhero TV series of all time; adult or otherwise. 5/5 Late-Blooming-to-Excellence Bibles

The first three episodes of Invincible debut on Amazon Prime on Friday, March 26. New episodes will debut every Friday after that up until the season finale on April 30.