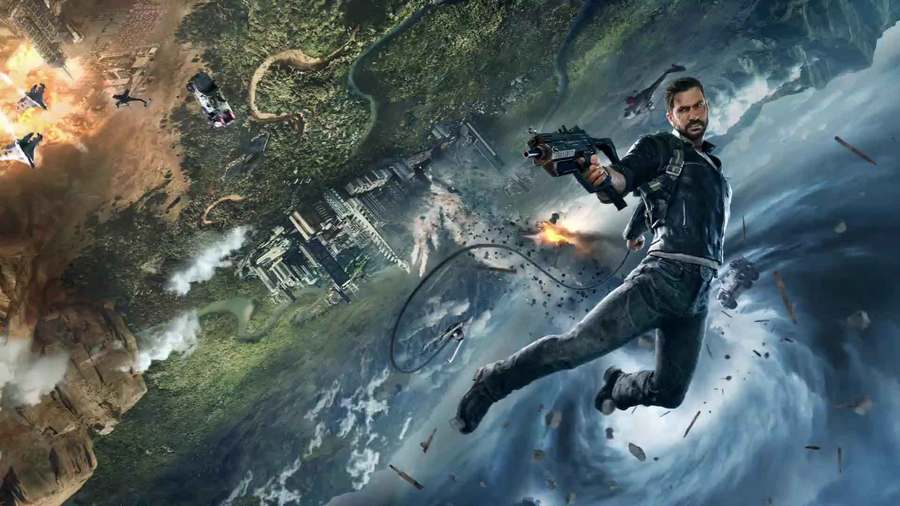 Tis the time of year when people are still searching for that late Christmas gift for either their special someone or maybe want to gift themselves a little something extra. Now, more than likely, by this time hardcore gamers finish their Spider-Man‘s and Red Dead Redemption II‘s, they’ll be looking for something fresh for the shelves and this is where you’ll find Just Cause 4. The third person shooter/open world game is set in the fictional South American country of Solis. You are series protagonist Rico Rodriguez and you have to take on the Black Hand, the world’s most powerful army.

Speaking of Christmas gifts, one that I find far more interesting than giving or receiving Square Enix’s Just Cause 4 video game, is discovering the actual history of Operation: Just Cause; which was the code name for the U.S. Invasion of Panama, led by recently-deceased President (and former head of the CIA) George H.W. Bush, back in December 15, 1989 – January 3, 1990. Obviously, Square Enix rebranded this video game franchise from that particular U.S. military operation, scrubbed its real history, and inserted a former-agent hero who looks like a Latin Dylan McDermott, who happens to be working with the people of Solis (Panama) to take down a greasy-looking, low-rent dictator from an ‘80s spy movie (a stand-in for Manuel Noriega, who was on the CIA’s payroll); all of this, while concurrently helping a Hollywood director make an action-adventure stunt movie in a tropical jungle.

ROBERT BEXAR: With callbacks to Just Cause and Just Cause 3, JC4 is jam-packed with tons of thrilling things to do, but the “grind” can almost become too much. Gameplay is enjoyable, yet replayability is questionable. Hey, we’ve had quite the year. Just Cause 4 present nice and clean visuals, and pretty cutscenes that unfortunately have faces that come off a little rubbery with dialogue that is standard fare. The control functions are pretty easy despite times where things get a little “glitchy” and you have to go in and out of certain menus to get the buttons to work.

JASON BUD: Yes, JC4 is a relatively-open sandbox third-person shooter, and there are an ad nauseum of missions, directives, side quests, and stunts to perform and complete; but time’s pretty much long run out on this hourglass-old model that video game developers continue to camelhump us gamers into the desert noasis with. Even so, I still enjoyed modding out Rico Rodriguez’s grapplehook wristrocket and going full-on Whiplash with it, Michael Bayonetting scores of Black Hand operatives and soldiers, along with their vehicles, armaments, and infrastructure.

ROBERT BEXAR: While the game is fun in the end, it’s ultimately forgettable. JC4 a title that you throw on between other games. Unless you’ve played the other 3 installments, there is no emotional investment. Since I’ve only played the second one, I have no investment.

JASON BUD: I agree that JC4is largely forgettable, an in-between boredom-reliever as you wait for that next big gaming title to drop; yet despite the fact that the cliched storyline, mediocre dialogue and voice-acting, and the sloppily-rendered characters and environmentsdetracted from my ability to achieve a considerable level of immersion, the many moments of paragliding and wingsuiting high above the islands and archipelagos of Solis brought me to a state of the digital sublime, as I was able to gaze upon it’s many miles of jungle canopies, hidden villages, thriving cities, tranquil seascapes and blazing horizon lines.

ROBERT BEXAR: When Spider-Man was released I couldn’t put it down; no one could. People became obsessed with that game and yes, it might be an unfair comparison, but nonetheless it is an apt comparison. I downloaded it and in 3 days, I’ve maybe put in 4 hours into it and I’m not feeling compelled to get back into the game. It’s there in my system aaaand that’s it and while I’m grateful to Square Enix for the download it’s going to be the first game to be deleted if need be. The game is fun, but at the end of day, it’s fun but forgettable. 3.25/5 Bibles.

JASON BUD: In closing, although Just Cause 4 can provide you with some moderately-entertaining brain candy, it’s poor man’s methadone in comparison to the lollapalooza-inducing euphoria one might experience by overdosing on the Red Dead Redemption IIs of the whirled disorder. I believe JC4 —and the entire JC franchise– would be far more compelling had Square Enix utilized some of the socio-political and imperialistic history of the U.S. and its involvement in Panama. Operation Just Cause tangled issues of control over the Panama Canal, CIA informant and dictator Manuel Noriega, political dissent, and international drug cartels, amongst other things.

Obviously, being a part of the Fourth Estate, most would say it’s naïve to expect a video game publisher to hybridize any manner of investigative journalism with gaming entertainment, as any such publisher doing so might be biting the iron backhand that feeds it… 3/5 Panama Reds.