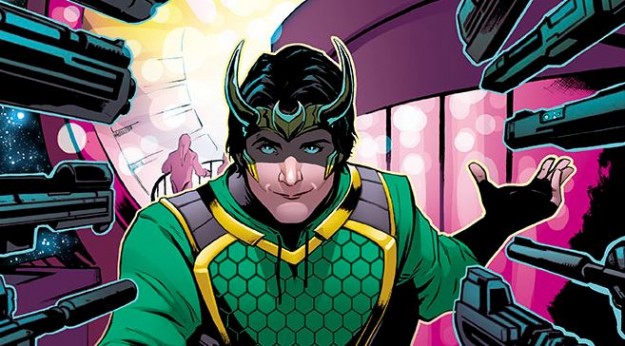 Continuing the All-New NOW! agenda from Marvel this week is an assortment of #1’s. Your friendly Apostle picked three out of the “jumping-on point” hat, comics that were ironically all good guys-turned-bad-turned-good-turned-who-cares-read-em-because! Since they all vary in quality, let’s see which comic is worth the pull, shall we?

The Lord of Lies has finally landed his own series. With obvious help from a certain actor who played the silver-tongued god wondrously on the silverscreen, welcome Loki: Agent of Asgard. This is a comic series that promises to be selfish, feature sword fights, espionage, maybe a casino heist or two, definitely an otter, more speed dating than Moody on a Wednesday night and one hellish dragon battle. This, all within the next couple months — at least according to current Mighty Avengers scribe Al Ewing (Judge Dredd) and beautifully delineated by Lee Garbett (X-O Manowar, Dark Mists).

At first, I wasn’t to hip on Marvel’s idea of another attempt on a Loki book, as our Monsignor will attest, but after reading this and the prequel in the stand-alone All-New Marvel #1, Ewing has made me into a Loki believer. It’s nice to finally see a revitalized adult version of the character, as opposed to Kid Loki — despite the high quality of Kieron Gillen’s Young Avengers and Journey Into Mystery. And unlike another morally ambiguous book, Black Widow, Loki focuses not only on dealing with his tarnished past, but in having it erased from our memories. But, as the final page shows, the pointy horned past is damn difficult to erase.

With Loki recently hitting upon a rainbow-tracked, hyper-speed train since Thor: The Dark World, some may first look upon this series as a bit of a force. But that’s OK– because the God of Evil likes it that way. And much like his underdog “heroic villain,” Ewing provides an exceptional experience for All-New readers while packing an ending and little hints of past comic glory that, hell, intense diehard fans of Walt Simonson’s run can enjoy.

(Flip to the next page for more reviews!)