Another week, another strong collection of comics need reviewing here at GodHatesGeeks, fellow geeks! We’ve had some great wrestling coverage this past weekend over on the East Coast, but now it’s time to get back to hitting those titles! Let’s get right to it, with a reboot of a classic series, the start of yet another major Marvel Event, and the return of one of the comic artists from the 1990s!

Rob Liefeld (Hawk & Dove, New Mutants, X-Force, Cable, Deadpool) is back at the Mighty House of Marvel in the X-Office making magic ONCE AGAIN! Action! Drama! Time Travel! Angst! Gritted teeth! Shoulder Pads! Pouches! Fun! Yes, FUN! Things move at a breakneck speed as Major X arrives from another dimension on a mission to save his reality. His only hope? The man they call CABLE.

This mini series is set in the early days of X-Force (around the time Rob left to start publishing a comic at Malibu and was never heard from agai—-oh wait…) and it’s a time capsules of awesomeness! The gang is all here: Cable, X-Force, Domino, Shatterstar, Wolverine, Deadpool and a new threat – DREADPOO! 90’s bad-ass penciller Whilce (Uncanny X-Men, Bishop) Portacio will be handling the majority of the art on this miniseries, with Rob writing the whole thing and drawing the opening and closing chapters. Summer has arrived early! It’s RAD! 5/5 Bibles with Collectible Trading Cards!

It’s been nearly a decade since Jason Aaron started his legendary Thor tale and it’s soon to finish with War of Realms. I’d be wrong to say I was not with out tears as I slowly opened the first page of the Thor’s most epic journey yet. This book thankfully hit every benchmark I needed, and I may hold it as one of the best mass Marvel stories yet. It’s also rare recently with Marvel that an event book starts off so strong. Thankfully due to Aaron building such a slow burn over so many years, it is everything we have ever wanted!

WOTR starts with some background. There are ten realms…Malekith and the dark elves have laid waste to most of them…and they’ve saved the best for last: Midgard (Earth). The War isn’t coming. It’s already over, the bad guys won and Earth is the trophy. That explanation takes maybe a page or two. After that all hell breaks loose. I remember reading in an interview that Jason compared his War of Realms storyline as what if Lord of the Rings took place in Manhattan, and he is dead on! 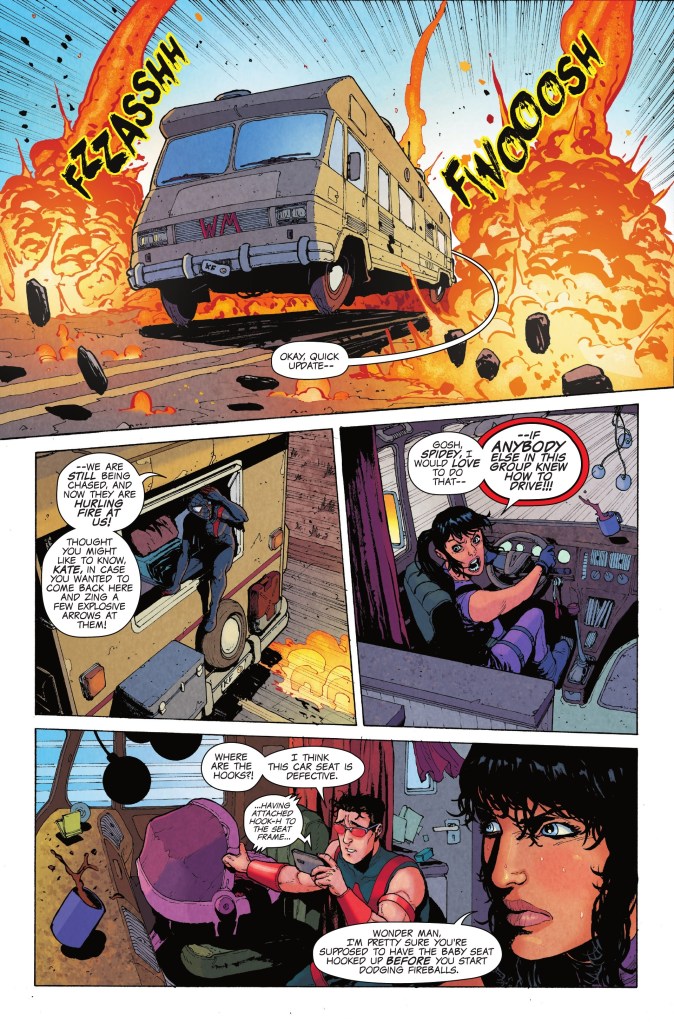 Aaron’s has always painted an elaborate hero’s journey for who’m ever wielded the hammer, but one thing I have always loved is how he portrays the many villains through out his run. With Malekith being my favorite of all time! To think, if I remember right, it was during Thor:The Dark World that Aaron first brought the dark Elf back in to the pages of Thor. Within this comic though, Malekith isn’t the only uber villain Aaron plays with. There are moments for all of his comic enemies to take their moment to shine, such as Loki and his father Laufey’s battle.

Also how can Aaron end his amazing run then without his stellar artist that started it all with him, Russell Dauterman (Thor). I have loved Dauterman’s work for years and he has always had a special place in my heart when it comes to Thor. We honestly could not end this era off right, than with out Russel on panels. Plus did you see his rendition of a jacked Punisher? Holy Thor Hammers I want him on Punisher next. 5/5 Holy Hammer.

Coming off of the Wonder Comics lineup, Dial H For Hero was a fun, light romp, and an interesting start to this rebooted miniseries. Sam Humphries (Harley Quinn) and Joe Quinones (Howard The Duck) team up to tell the story of teenage daredevil Miguel, and his entrance into the world of superheroing via the use of a mystical red telephone that transforms him into a superhero for brief periods of time.

Having been unfamiliar with the prior iterations of this series, it was impressive how easily Humphries manages to give detail not only to this particular section of the DC Universe, but also how quickly and readily he manages to build up Miquel as a character: in one issue we understand his childhood, his relationship with his parents, his friendships and shortcomings, and his obsessions (as well as how those obsessions were formed), and we have a similar understanding with his friend, Summer, who…though she appears more sparingly…is given just enough heft to make her interesting. Quinones’ work, as usual, is bright and crisp and clear, with a certain lightness and deftness that worked so well for his work over at Marvel. Here, given the tone and the age of the protagonist, it works well. And although this origin is just another shade of Shazam!, it is still interesting enough to follow on its own. If you’ve never followed this particular breed of hero, it’s easy to get caught up in it. 4/5 Bibles.