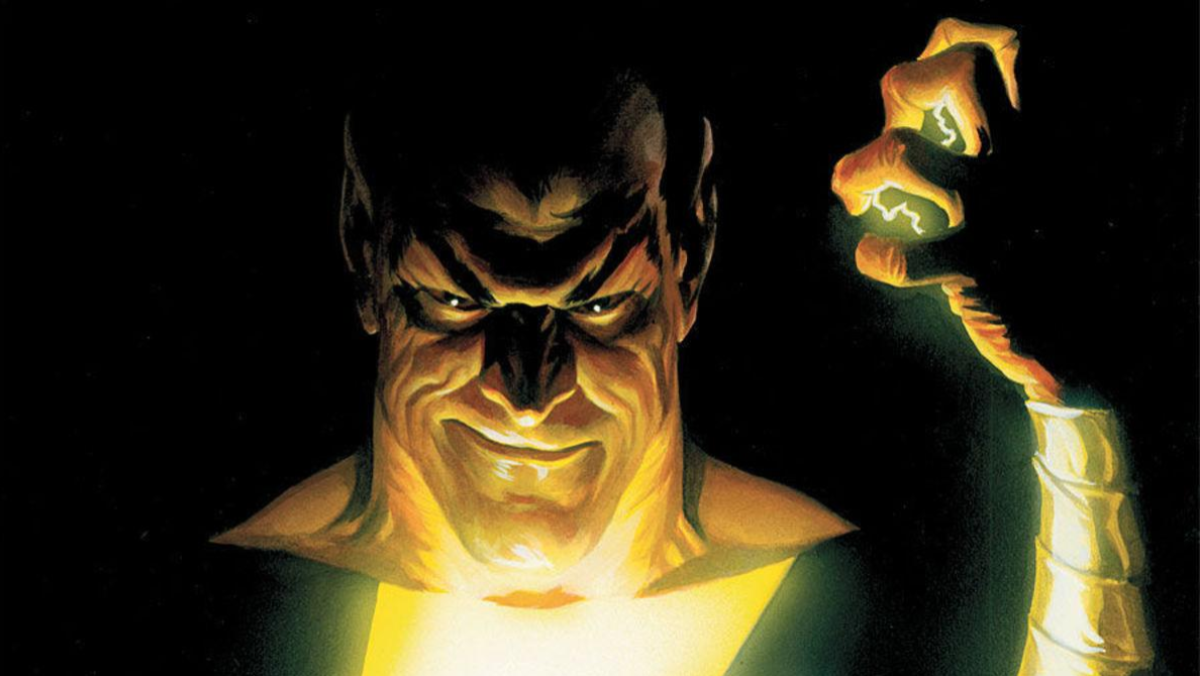 Happy Halloween, geeks and geekettes! Sure, there’s a few more days to go, but that doesn’t mean we can’t have a bit of fun a bit early, eh?! And to help us out, we’ve got the Big Two — DC and Marvel — helping us out with some great titles! Not scary per se…but still worth reading! Or ARE they?! Find out what you think, and whether it’d be ghoulish to be missing out!

Over the past couple of months there’s been a lot of praise heaped on Jonathan Hickman’s new take on the X-Men and rightly so. In terms of big ideas, progressive storytelling, and overall sense of elevated stakes Hickman’s run is already pushing Morrisonian and Claremontian levels. Chris Claremont‘s run specifically, however, had a sense of adventure to it that Hickman’s doesn’t seem to have time for given all the huge stuff going on and if that’s something you’re missing, then Marauders #1 by Gerry Duggan, Matteo Lolli and Gederico Blee is the book for you.

This book is all about Kate Pryde, no longer Kitty, in a way becoming a pirate captain, sailing around the world, drinking, and getting into amazing fights with militant mutant oppressors while helping the cause of mutantkind. Kate also gets her own team, which includes at least one of the all-time greatest X-Men. The story is great, Lolli’s art is expressive and dynamic, and Blee’s coloring elevates that art to another level. This all leads to a massive amount of fun, and while there’s certainly a mystery and the potential for some heavy storytelling down the road, for now this book serves as a counter to the weight and scale of Hickman’s work and compliments it beautifully. 4.75/5 Mutant Pirate Bibles.

To be perfectly blunt, I’m not really following DC’s whole “Year Of The Villain” story arc. I know what is going on, but I feel like this would be better as an anthology series rather than a series of one-shots. The one-shot has become overused and overplayed. It seems more and more that the one-shot or one-off is just a way to try and get an extra $4.99 out of you and to be fair, if the price of a comic was $1.99 this book might have received a higher score. On top of that, this is a one-shot within a one shot, seeing as how this is both a “year of the villain” tie in AND an “infected” showdown, since Black Adam is facing off against a Batman-Who-Laughs-infected Shazam. That all being said, I do like how Paul Jenkins turns this story on it’s head.

Black Adam, at his core, is at best an anti-hero and at his worst, a dictatorial tyrant. He will protect Kahndaq with all his might, but much like Dr. Doom, if you oppose him he will crush you. Paul Jenkins flips the narrative on its head by starting off how much of a tyrant Black Adam is, but also shows how much he cares for his country and its people. And by the end, we see just how much the people really care for him. I think the best thing about this issue is the art by Inaki Miranda with the colors by HI-FI. They do an amazing job on this book, and would be really great to see them take on another series (Shazam maybe?). 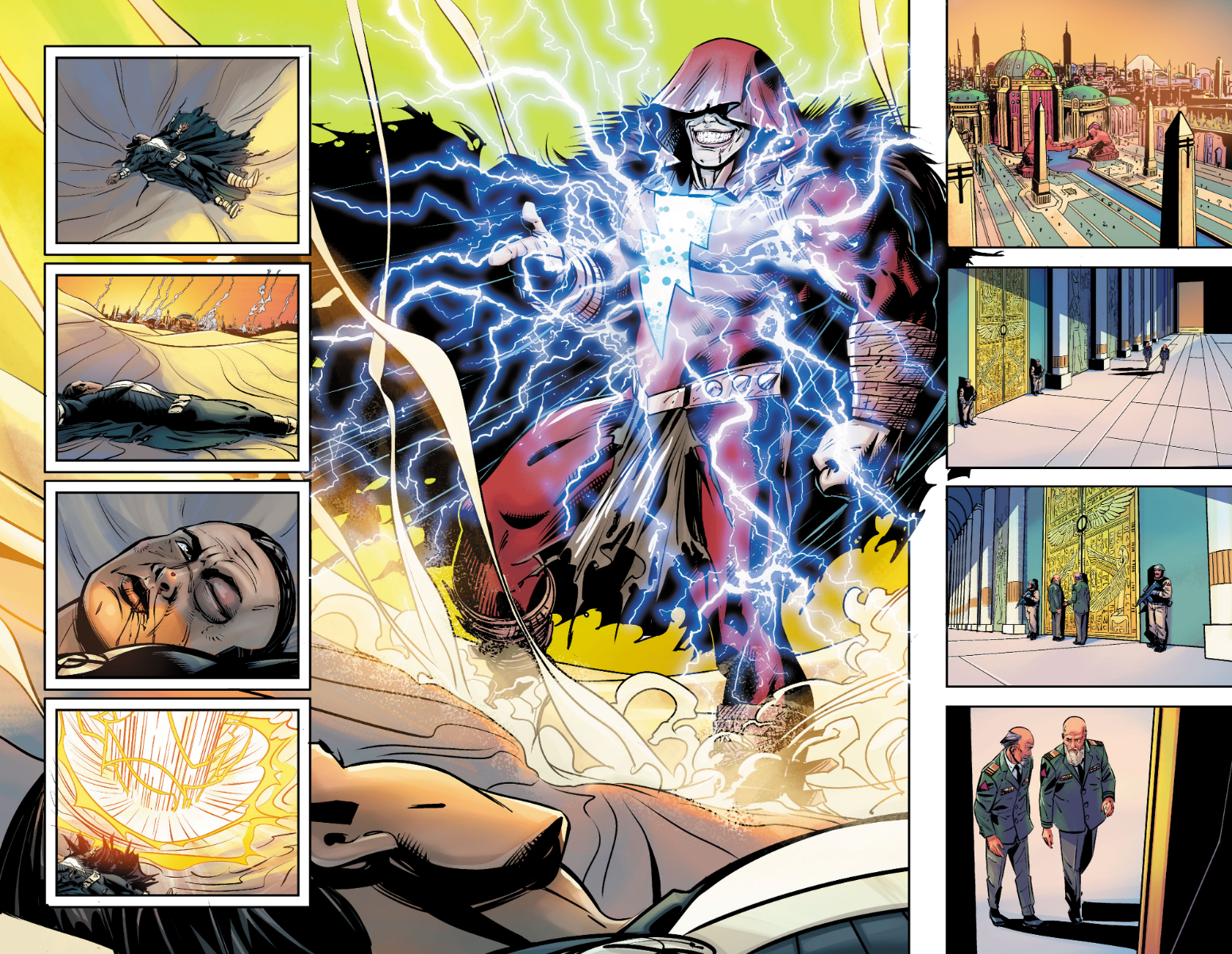 That all being said, like I said earlier, if this had been part of an anthology or maybe in the back of a book, a la Geoff John’s Shazam that was included in the back of the New 52 Justice League, I might have rated it higher, but as a stand alone issue it just isn’t worth the price of admission, as much as I hate to say that. 2.5/5 Infected Heroic Bibles.

Well, it finally happened. Nearly 53 years after her first appearance, Mary Jane Parker (née Watson) got herself her own magazine. And she still looks hot.

What isn’t as hot, however, is the comic itself. Without further ado, let’s get into the nitty-gritty of this little ditty. Opening on frames of MJ battling some of the original Sinister Six, we find that our starlet has realized her dreams and is now starring in a big budget Hollywood movie about… her. In actuality, the movie is a redemption story for an ailing Quentin Beck’s Mysterio, directed (with holographic cover of course) by the bowl-head himself. After uncovering his secret and complaining about her wardrobe – and dialogue, but we’ll get to that in a second – MJ phones her heroic hubby to assure him that she isn’t getting taken advantage of. Not yet, anyway. Assuredly, that will come later as the last frame of the issue indicates an insidious incursion into Hollywood by a newly-rostered Sinister Six. Perhaps Admiral Akbar should be added to the team as this is obviously a trap. 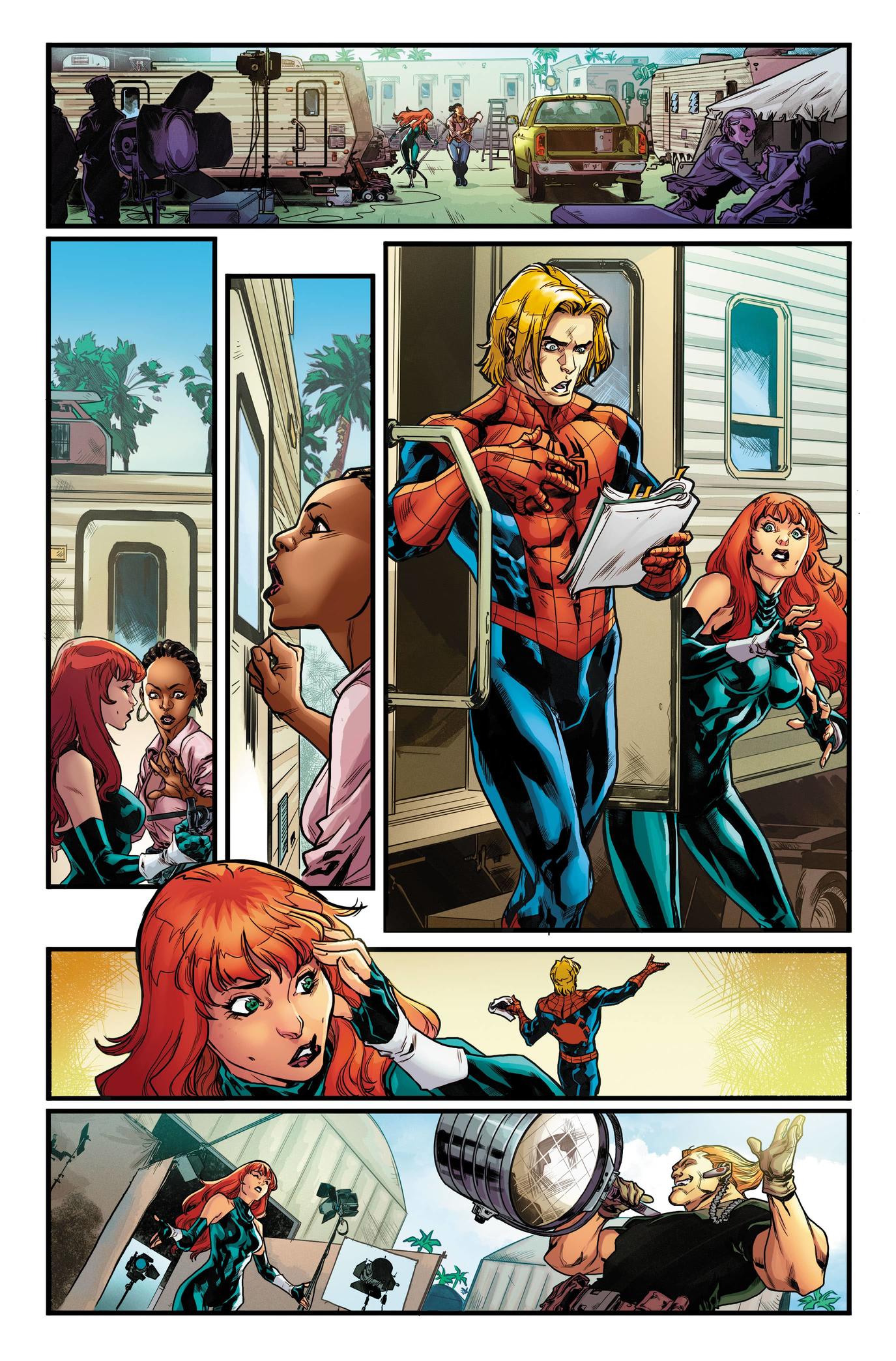 Like any successful trap, the bait must be enticing to the prey. In this instance, it’s the artwork. Far and away the best aspect of this issue, the images invoke a sense of nostalgia and homage to the character designs that came before while simultaneously updating the stylization for modern sensibilities. Working in concert with the drawings is the color palette and use of dynamic shading. Vibrancy exudes from the page while the lighting gives the reader the feel of working on set with an accomplished cinematographer, which is appropriate given the fact MJ is an actress.

As an actor myself (one who is actively campaigning to be Mr. Fantastic in the MCU so help me out geeks!), I can commiserate with Mrs. Parker and her distaste for deleterious dialogue. Which is basically my problem with the book as a whole. While true to form in how people speak to each other in real life, the dialogue is the exact same conversation that happens on every single production since the beginning of film. There may be some nuanced speech that hints at future situations, yet the story seems to be laying the groundwork for an elaborate scheme to take down Spider-Man. Again. Naturally there could be a twist or two down the road, though given the backstory of certain characters, that does not seem likely. And on that note, unless something major happens to this beloved character, drastically altering her being in perpetuity, MJ will still be living in the shadow of her super-powered spouse. 3/5 Bibles.