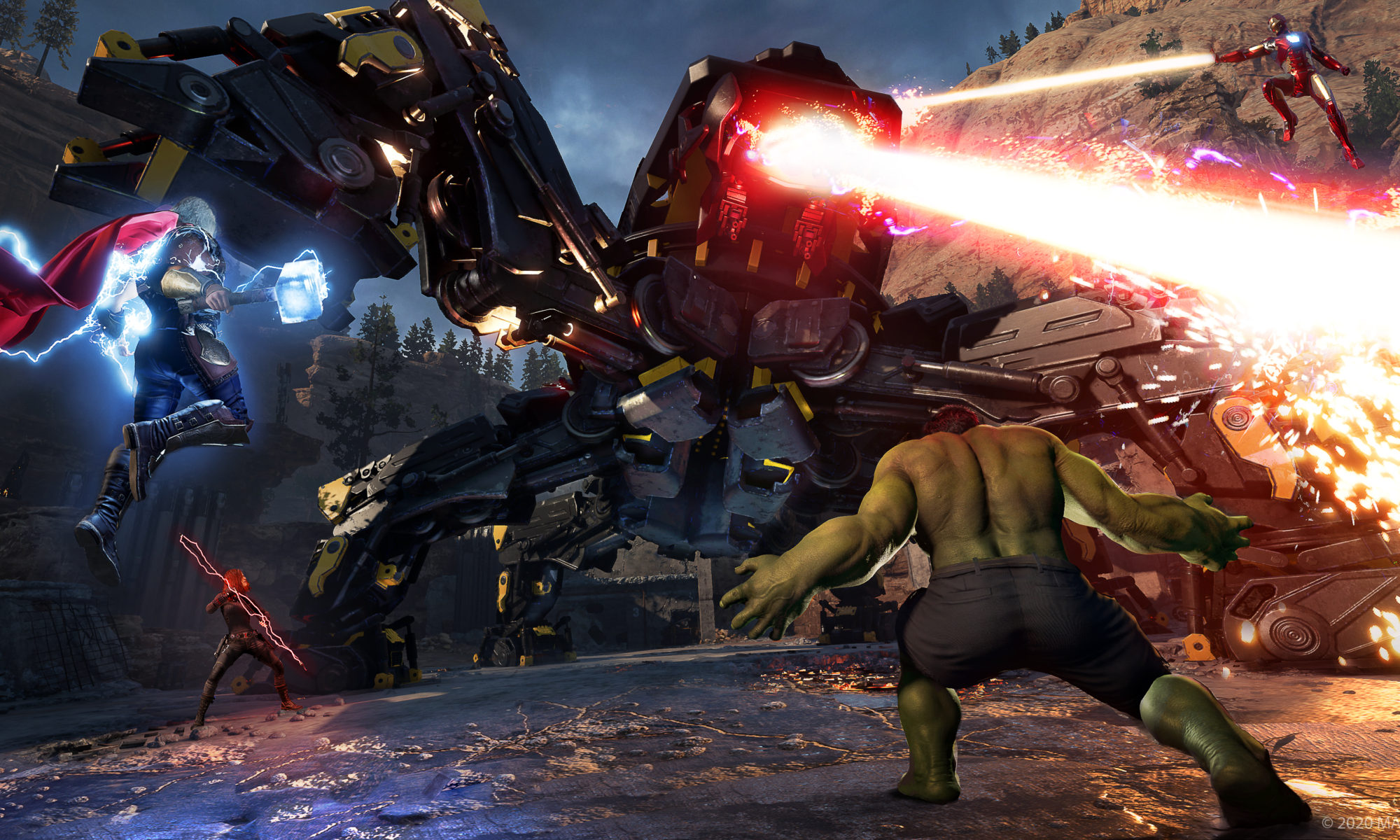 This Marvel game likely won’t wind up game of the year, but can it become game of the.. decade? After today’s gameplay event of Square Enix and Crystal Dynamics’ next big franchise, it appears the “Endgame” possibilities for Marvel’s Avengers are endless. Sit at my War Table and allow me to explain…

First things first. A year ago this game looked like crap; do you remember my sadness with the Avengers‘ E3 2019 presentation? Let’s just say today went a little bit better. OK, a lot better. Beyond the poor facial representations, we had no idea what the hell this game was. I’m not sure Crystal Dynamics (developers of those pretty damn awesome Tomb Raider games) had a clue at the time either. Fast-forward a year later to Bizcoronaworld and we finally some answers…

In this mode you customize your superhero like you would in Destiny and team up with your buddies — or A.I. teammates, yes! — in dynamically scaled, faction-led missions. Much like the Tower in that co-op shooter, you’ll have your Helicarrier and your squad will be able to rebuild it. Factions leaked in the presentation were S.H.I.E.L.D. and the Inhumans (guess Marvel hasn’t completely given up on them quite yet, eh?).

But, easily, the best part of War Zones are the cosmetics. We’ve always wanted a Batman game where we could switch Bat-Uni’s mid-game, and, instead, Rock Steady gave us the option to New Game+ Arkham Whatever in a whole new outfit. Yeah, shite. At least here in Marvel’s Avengers, you can enter each mission with a different get-up each time and earn new tights along the way. Hulkbuster here I come! The Donald Blake duds on Thor showed off a little humor from CD, too, a team most used to penning serious tales in exotic, cavernous lands.

Those open stretches will be here in Avengers too, but speaking of humor, players will battle MODOK‘s mindless A.I.M. jerks in more confined spaces ala Marvel Ultimate Alliance. The variety seems key. Along with cosmetics, unlocking signature powers for each supe is another key to the game’s replay value; you can approach these War Zones and their given spaces and enemy selections with different tactics.

There are Ultimates as well as double Team Finishers. Your Cap won’t play like her Cap or his Cap or my Cap. Original Sin Tony Stark? Dope. Manual attack Mjolnir (inspired by Jason Aaron’s famed comic run!)? Whoo-boy. Considering they only halfway addressed the face-scans, it looks like Avengers‘ highly promising customization will more than make up for those.. faces.

MECHANIZED ORGANISM DESIGNED ONLY (for) KILLING

Did somebody say MO’ DO(f)K? He’s seemingly the big bad in Marvel’s Avengers, at least from the get. Because this appears to be a games-as-a-service situation, we could see many other villains in updates for years to come. Probably not Mysterio or Green Goblin, because of that whole Sony Spider-Man thing, but at least we could be blessed by the presence Thanos, Magneto and Doctor Doom. Ha.

Well, the X-Men and FF haven’t been quite figured out for this edition, but if Ms. Marvel is any indication, we might not be relegated to a dated Avengers-only title like it had first appeared. So much has happened in the funnybooks and on the big screen since the very first announcement of “The Avengers Project”, that now feels like 17 years ago.

But, baby steps. I get it. I’m not expecting Sabretooth and Fantomex, but some more surprises (like we saw with Ms. Marvel and MODOK) appear to be on the way. Like I said, this is one game that might have no endgame. The key beyond War Zones for me, though, could be just how much single player we’re going to get beforehand. Today’s War Table showed off and discussed Thor’s “Once An Avenger” campaign, and it’s a guess how short these Hero Missions will be and how many more character stories could be added later down the line.

If Square Enix can work out a respectable subscription system (for future expansions and DLC; we already know many cosmetics will come at a cost), obtain the licenses to some characters beyond the world wide webbed, and offer more stories for those who don’t always want to go online, this is certainly one franchise that could assemble this writer and his Xbox Live peers for many years to come.

Marvel’s Avengers is set for release on September 4 for GPlayStation 4, Xbox One, PC, and Google Stadia. There will also be a free upgrade option for PS5 and Xbox Series X, as well.