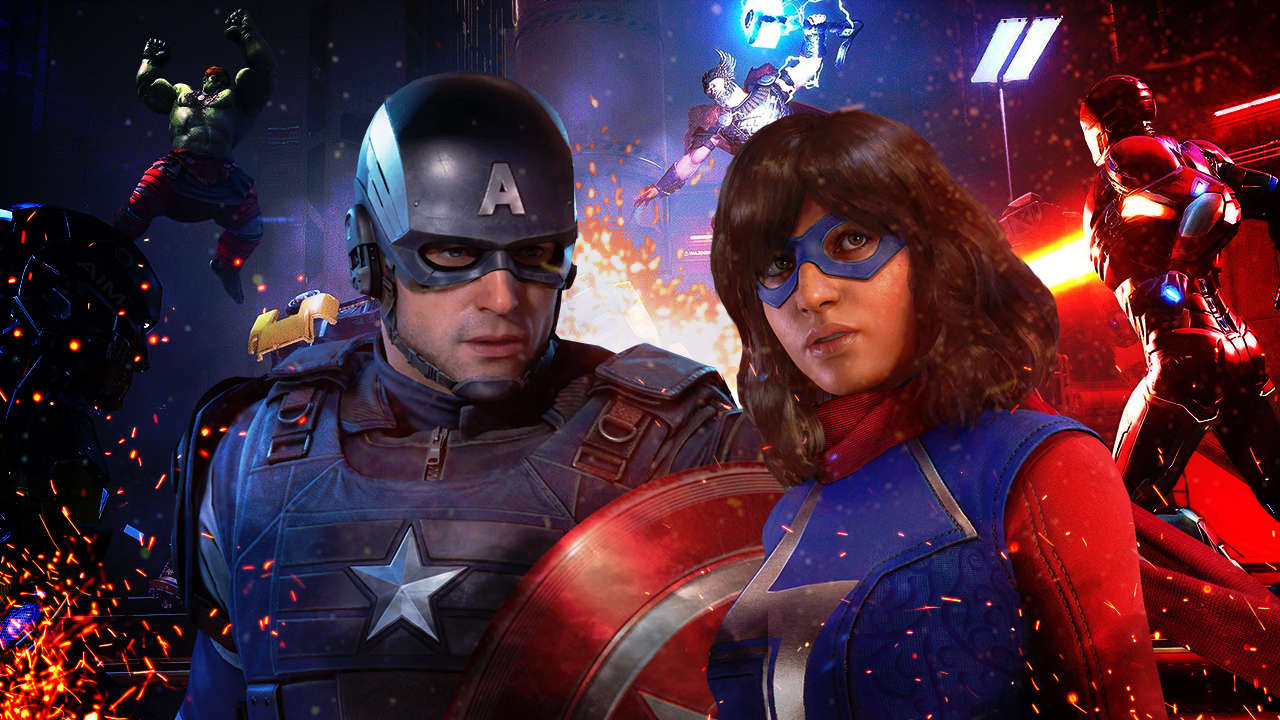 It’s rare that I feel as ambivalent about purchasing and playing a game as I was with Marvel’s Avengers. Hands on previews and playing the demo made me feel like this was going to be a waste of time and money. Another redundant “games as a service” game that demands too much of my time with minimal reward. On the other hand, this seemed to be a fun game to play with friends, especially if you’re a Marvel fan. I was convinced that it would at the very least be fun temporarily, but quickly become repetitive…

I was right, but only about the multiplayer, because the campaign is where this game shines. You play mostly as Kamala Khan, a young superhero nerd and comic book buff who just wanted to get her superhero story published before the world experienced an explosion from a reactor that caused many to die, and others to become inhuman. Kamala was one of the people who became inhuman and everyone considered people like her to be dangerous and sick.

Kamala didn’t let that stop her from using her new powers (Gomu Gomu Luffy stretch arms, giant hands) to help the world. She joins the Avengers in a fight to save inhumans — and not Inhumans of the Kree-Skrull War and that dreaded, short-lived ABC show, mind you — from an organization named AIM (Advanced Idea Mechanics) that has been using inhumans as lab rats and stripping their power for their own gain. Even with all of Kamala’s might and determination, she finds the Avengers to be broken and disassembled…

Kamala’s journey is one of becoming a super hero, while she convinces the Avengers to re-assemble and be the heroes she grew up to admire. Kamala is sincerely the best part of this game as she is innocent, wholesome, empathetic, and determined. She is purposely made the shining star of this story and she’s damn good at it. This is thanks to the superb voice acting, which is solid for every single character and every Avenger.

Marvel’s Avengers tries to set itself apart from the MCU but somehow it captures the charm of those movies while maintaining a unique story and character angles. This should come to no surprise as the cast is filled with voice acting juggernauts (Troy Baker, Nolan North, Laura Bailey, etc.) and their performances at times gave me Uncharted vibes, especially with the father-daughter-like relationship between Kamala and Bruce Banner. There is no doubt that if you’re a Marvel fan, this main campaign will be a fun experience.

This story made it easy to overlook the plethora of performance issues I experienced in this game, but I imagine those issues will eventually be patched. There were consistent frame dips, facial animations not moving during dialogue, characters swimming in the sky, and the camera shifting to the opposite side I point toward. These issues were a tenfold during multiplayer and for a while, I couldn’t get into a match and launching sometimes caused my game to crash. There is no doubt that this game could’ve used a lot more time baking in the oven.

If you played the demo and it turned you off to the combat, I can assure you many improvements have been made, especially to the Hulk. Yet, the combat overall still feels floaty and at times janky. For instance, sometimes you don’t feel the impact of hitting an enemy or parrying is difficult to execute because there’s so many flashing lights, lasers, and explosions on the screen. Even the vault over a shielded enemy mechanic isn’t responsive, even if you’re locked on. Instead, my character would just dodge around.

A handful of mechanics are frustrating and not exactly satisfying. Thankfully, the combat is simplistic and you can get away with button-mashing your way through normal mode, but you can also be mindful of different combos you unlock to make combat more dynamic. I especially like when you’re next to a teammate and you both do a super cool double team finisher. Even though the combat is mostly bare bones, it’s still fun and every character feels unique.

This brings me to the upgrade system and side activities which feel very similar to Destiny, except Destiny’s combat is actually skill based and requires a level of team coordination. The upgrade menu and item ranking looks very similar to Destiny, especially how you hover over an item to equip or dismantle. There’s factions and vendors that offer their own items and missions, which again, similar to Destiny. Moreover, some missions requires you to fight off enemy waves as JARVIS (like Ghost) unlocks some mechanism. Other objectives include taking over different control points– all very similar to Destiny. The thing is, defending a point feels extremely dumb when you’re a superhero that launches really far or flies really high to attack or gain vantage points. These objectives felt jarring and became stale extremely quick.

I’m grateful these objectives were sparingly used in the main campaign and gameplay was kept fresh. Certain sequences will force you to play with different characters or utilize a specific character ability. Crystal Dynamics also tried to switch up gameplay sequences by including a good ole’ Indiana Jones running-away-from-boulders-type sequence or even a stealth section. Actually, the stealth felt extremely out of place until you played as Black Widow, and I’m grateful it only lasted for one section. There were flying sections or parkour sections that were fun, and each boss fight felt unique. Gameplay is simply fine.

Let’s briefly dive into the multiplayer, though do come back to read my updated thoughts (at a later date) because I haven’t reached level cap or completed any of the high level missions. The MP has so much potential to be a fun activity with friends despite the extremely redundant objectives. You’re given daily and weekly missions, as well as some community quest lines, but none of it feels worth doing. As mentioned before, the technical issues are much worse in multiplayer. It doesn’t help that having random players join your squad takes too long for a game that was just released less than a week ago. I’m going to give it more of a chance, but at this point no cosmetic items or missions make me feel motivated to play multiplayer.

I finished Marvel’s Avengers satisfied with the main campaign and I kind of wish they would’ve left it at that, and created a more polished and contained product. I genuinely looked forward to hearing banter between characters and playing the next hero I unlocked. I cared about Ms. Marvel and her journey with The Avengers. The visuals were bright, pretty, and flashy, but this took away from creating a satisfying combat experience. I still had a lot of fun, but that joy ended when the campaign ended. 3.25/5 Bibles.