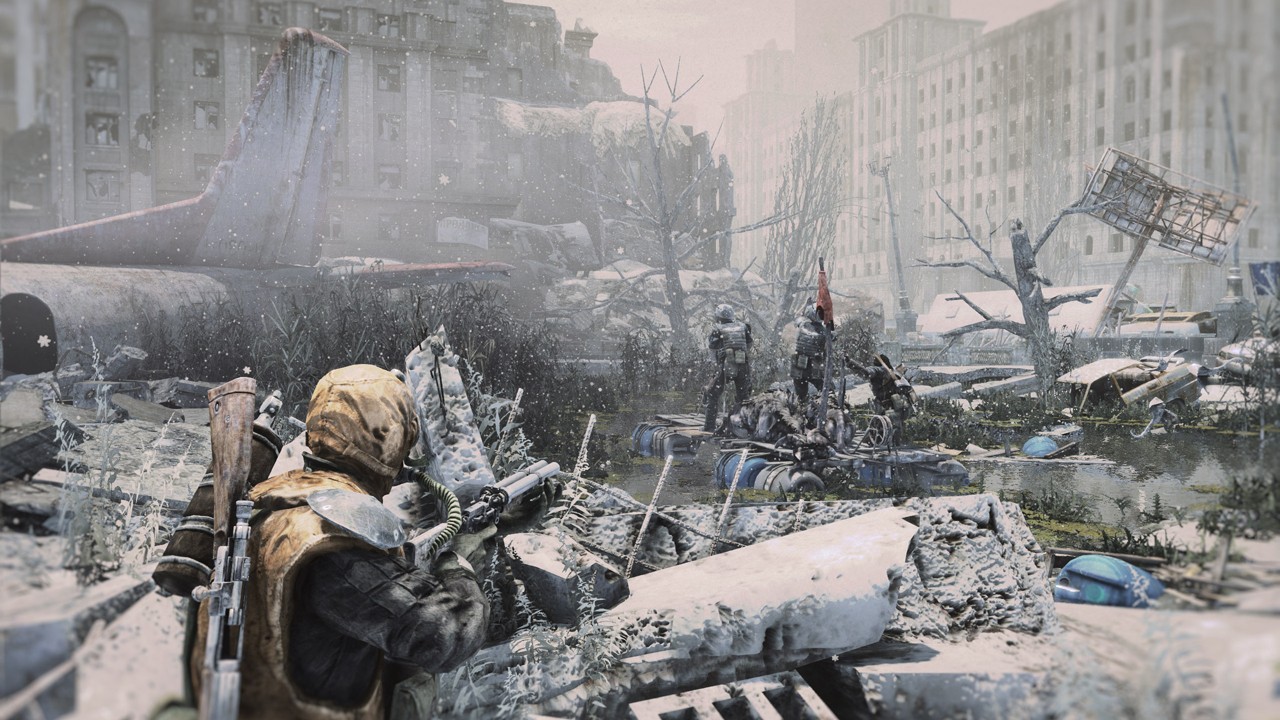 You coulda been a contenduh (for GOTY).

Instead, when the action got a little hot and heavy, you stalled on me.

No, Metro: Last Light, you’re never going to beat any Call of Duty in a sprint; you most likely would never going to reach Gears of War in a marathon; and staying stride for stride with Dead Space in a relay, no way.

But, to say I didn’t enjoy the svelte, cryptic atmosphere of Metro’s nightmarish catacombs would be a lie. It’s just, you froze on me one too many, one too many mother%&*^#@ times.

It’s been a breezy, sunny week in Los Angeles. I could have used the time for a hike, a cruise down Sunset Boulevard at $5/gallon, or on a few sips of a Tall Mocha Latte, pretending to type a screenplay. But, no, Metro; this bitch chose you — the dark, cold and calculated world of postapocalyptic Moscow.

Who wouldn’t want to fight Aliens AND Nazis in the nutty cold, anyway?

Godforbidden glitches and freezes aside (which only seem to happen when players are literally having a blast), there’s a ton to like about this game. Almost too much. Metro‘s more than impressive upside makes for one hell of a conflicting game to review. Though, sadly, a freezing screen isn’t the only instance the game stalls. Koch Studios wanted to move the story along — since the game itself is a rather.. creeky journey — but that creates a whole other problem, entirely. Just when the action does get all hot and heavy (don’t worry; you get the full lapdance later on. Tip heavy and hey-nowww…), a load screen will appear with a tiny diary note.

Uh-huh. You’re moving on to the next section of the Metro, pal.

That can be a good thing. You won’t be caught up in too many of the same radiated wastelands (which require a gasmask and additional filters for survival), wartorn metro rails, coral tunnels, or subterranean reliquaries for too long. Since Metro‘s graphics are so godly, checking out a variety of locales is a major plus.

Some funny things happen along the way, and I’m not just referring to the game’s sudden lock-ups. One time, a Nazi noticed me lurking around during a rescue mission, further alerting other members of the Reich. With that, Artyom — our quite mysterious protaganist on hand — decided the best spot to gun down foes would be a single toilet stall. It worked. Basically trapped, it was no sweat (on the Normal setting) gunning down a dozen highly-equipped soldiers. On the negative side, I ran out of filters for my breathing apparatus.. with no time to spare. I played the highly toxic level over and over until til I, ever-so-bullshitly, found a filter that resulted in just a second enough for a confirmed loading screen.

Then, I began one of the later levels with no air in the mask, which only meant I was ready for death the second my checkpoint began. Thankfully, our Ranger sprinted across the barren lands just in time to find a filter…and took out a gang of “watchmen” alien doods before conveniently picking another gasmask close by.

Hey, those “nick of time” instances do happen in the movies, though, don’t they?

As for the guns, while traditional in their style, don’t overpower enemies or overwhelm the user. The pistols, when fully customized with laser beams and silencers, are more useful than previous FPS’s; the sniper rifle’s night vision scope is, not only great to look through, but remains fully functional. For instance, I was able to backtrack to a dark room, hide behind some plants and pelt a few flashlight scoping bafoons down. That weapon definitely prevented “certain doom.” One more guy left lurking around a few crate boxes? Creeping with the melee never felt this good.

No question, controlling your Ranger in Last Light is terrific.

And don’t get me wrong; not all enemies in the game are easy-schmeezy. A lot of these Nazi foes have the dexterity of Balroc the Leaper, swiftly dodging bullets even at close-range. This might also be the first game where the enemies follow you into the airvents! A lot of our opposing creatures certainly couldn’t come at a better time for me personally, either, seeing how just watched both The Thing and The Mist on the big screen for the first time. Dragon-aliens that snatch and carry — and most certainly drop — you through from their talons high above the wastelands? Armored shrimp that coast around you in the marsh, only to offer their best poison and sting?

Killing these pests offered a similar thrill to those killer movies.

Of all the monsters found on Metro, the Spiderbugs proved the biggest pain, since they’re basically bulletproof unless your flashlight flips ’em over. After these monsters piss you off, you can literally wipe the slate clean with the left bumper. Certainly, this is the first time this player has ever been able to wipe blood and mud from a facemask in any game before.

It’s also thrilling to see the Russians, the Pinkos, the Commies.. as the good guys.

Well, at least for a little while.

We’ve been fighting against this place for years in the multimedia, so it’s about time.

Again, at least for a little while, with thanks to author Dmitry Glukhovsky for the game’s intriguing story.

Much of the heavy Russian-inflected dialect in the game is pretty stellar, too — especially the guy who sings to his pig (and the lil’ boy who tells his pops he’s got to squirt). Be careful though, as these guys don’t mind talking up a storm during your break from all the Nazi/Alien slaughter. Enemies will also chat for a while, too; you’ll get “modest” points if you dare allow them to finish. You can unscrew lightbulbs, chuck dynamite, toss over some flarebombs, and set off gas lamps — all to make life easier in those web-tangled catacombs.

Even better, there’s no darn sinks or toilets you can “use”.

Metro: Last Light‘s campaign is filled with tension, stirring artistry and grace. Unlike the war games previously mentioned, killing stats are not important and the supernatural elements add to a more fulfilling campaign than a your typical slaughterhouse of numbers. The sounds of the game are also nearly as vital to Arty’s mission than anything else. The rustling trees, the chiming winds, the sounds of mudding puddles, the failure of your breathing apparatus. The roars of cave freaks and imaginative amphibians do no more than justice to your Dolby 5.1. Scouring through this haven of insanity should mean so much more to the player personally when the Dark One is discovered.

Despite some questionable Russian accents, the Red Line refugees serve as a better reflection of what the Metro once was: an underground community that persisted through biochemical war and family tragedy, mutated beings and political greed. There’s also something else you don’t see in a military FPS every day: markets to buy ammunition and customize your guns. In addition to shopping, the Red Line offers live chamber music, caberet, and a certain.. alien tamer. (Hey! You’ll even receive a hard-earned achievement for sitting through all this schlock, too.)

In this regard of both entertainment, war, and all its horror, Metro comes off like an European-flavored cross between Skyrim, Battlefield and F.E.A.R. And while Elder Scrolls V: Skyrim had its share of glitches — the game wouldn’t have been nearly as legendary without ’em! — none of the bugs could ever be as frustrating as firing on a railcar and seeing none of your bullets work, only to witness immediate death. Since many of the games checkpoints lead to glitches, you’ve got to start the entire section over for the game’s story to flow through.

Just wait ’til you get to “The Chase” train sequence for that particular boo-hoo.

Look, freezing cold with an assortment of programming problems or not, the midly-hyped Metro: Last Light is essentially what the utterly disappointing Aliens: Colonial Marines should have been. And, for all the pizazz that blockbuster franchise had going for it, having the dysotopian goodness of Metro take its place is truly the highest compliment anyone could pay.