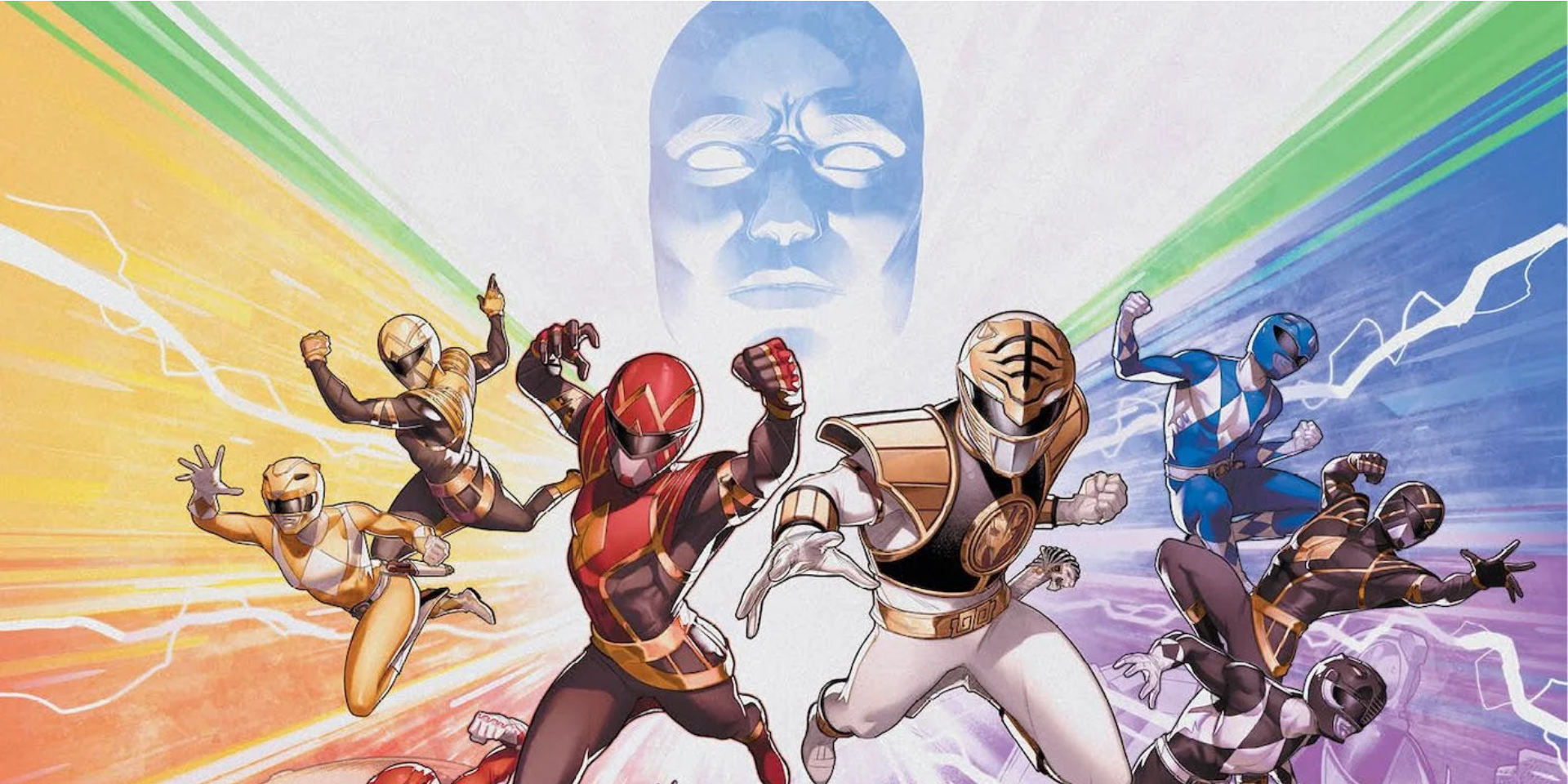 Wow, what a ride! This issue concludes the “Necessary Evil” storyline that began in issue #40, which was also expanded on in Go Go Power Rangers. Small spoiler alert if you haven’t started this arc…

Remember on the TV show when the OG red, black, and yellow rangers were chosen to go to Switzerland to be part of a worldwide teenage peace conference? Well, that was all a lie! It turns out that Jason, Zack, and Trini were chosen by the Morphin Master; if the Morphin Grid is the speed force, think of the Morphin masters as the physical embodiment of it that we sometimes see manifest to communicate to the various speedsters. Thus they become the Omega Rangers and travel into space to deal with new threats emerged in the aftermath of Shattered Grid — also a great arc, think Infinity War/Endgame for Power Rangers). 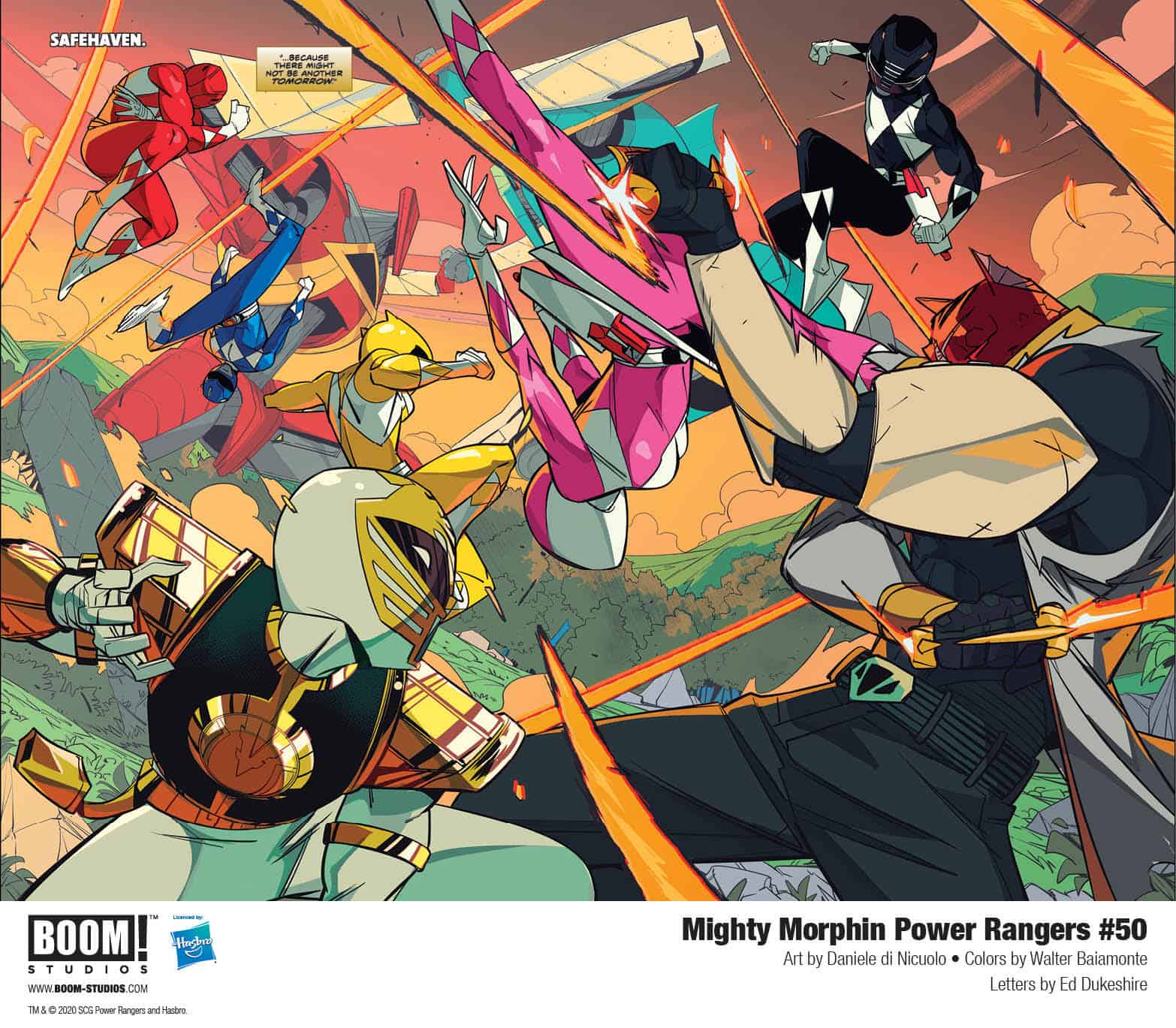 They fight new alien monsters empowered by the grid and lie to their best friends in the process, while their replacements on the MMPR team struggle with living up to the OGs. Naturally, the earthbound team finds out what happened and are upset, but have to team up with the Omega Rangers anyway, you know, since they’re power rangers and there’s evil to fight… in the form of the blue Omega Ranger. Dude went rogue, freed the prisoners the Omegas had captured/defeated and are now trying to destroy all power rangers.

Back to issue #50, the final confrontation. The Mighty Morphin team travels to space in the White Tigerzord to help the Omega team. There’s a lot of great action panels here, not a ton of story… That all happened in the issues leading up to this one. But there were some good beats. The new rangers, Rocky, Adam, and Aisha, get over their insecurities and prove that they belong on the team and are great power rangers. Billy and Kimberly wrestle with being the veteran rangers, while Tommy learns how to be a leader. 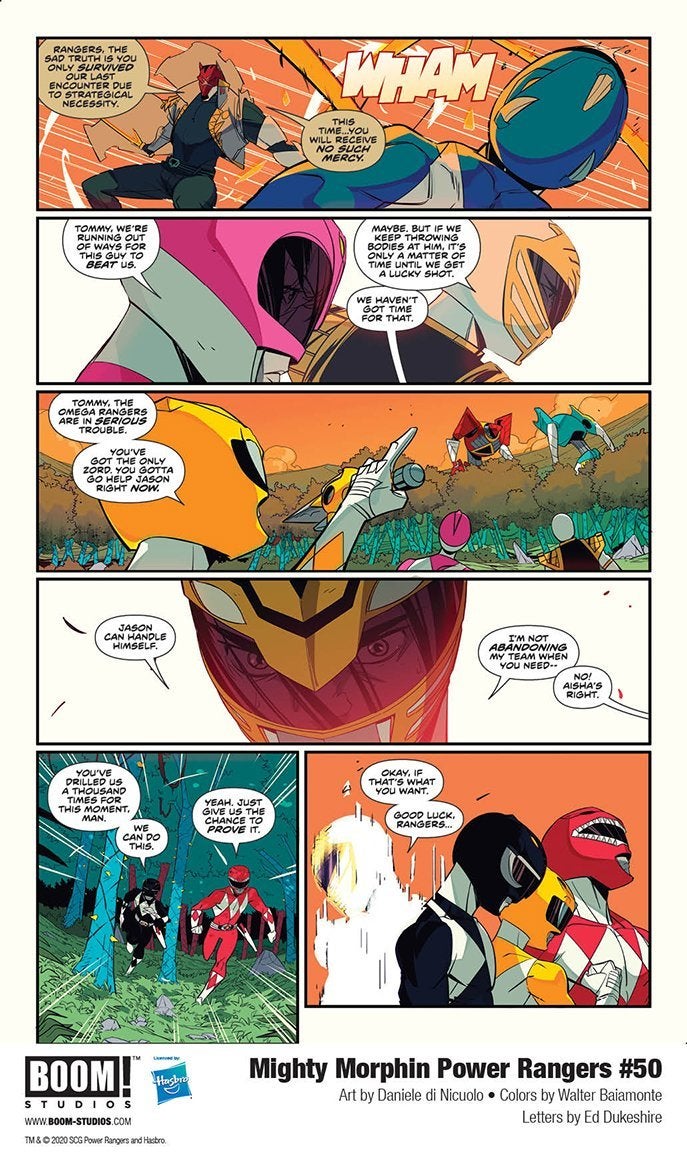 It’s a quick issue, but it wraps up the arc nicely, brings back some newcomers from Beyond the Grid (the interlude between Shattered Grid and Necessary Evil) as well as the fan favorite Ranger Slayer (the pink ranger turned evil, turned good from the dark timeline in SG). The last couple pages setup the future nicely. Slayer is returning to her timeline to deal with her mistakes, leading into her solo title coming soon. Then, there’s the big reveal… after everything is calm again, the MMPR and the Omega team has made up, a meteor crashes to earth and out from the crater and debris, steps… Lord Drakkon!

The evil alternate timeline Tommy Oliver that was the central villain of Shattered Grid and almost destroyed… everything… although this time, he looks a little more worn down and beaten than he did before. Is this the setup for the next MMPR arc? Or the tie in for the upcoming solo book he may be getting soon? I’ve been following this series — admirably penned by Ryan Parrott — since it launched in 2016, and it’s rarely disappointed. As always, issue 50 expands the mythology and tells us stories fans of the show have never seen or heard before. I’m excited to see where they go from here.