Another weekend, another Sunday Stash to read here at GodHatesGeeks. We’ve got the DC Rebirth fully underway, as well as another go-around with Marvel having a full-blown Civil War (again! Why fix what ain’t broke?)!

This week, we’ve got some of the hottest upcoming titles to peruse, which is apt, seeing as the weather is getting hotter and hotter by the day anyway! Hot weather, hot comics? All you need is a cold drink to go with our reviews, which begin with…

“Cardinal” Brooks here with my newest mission improbable: Should I choose to accept what is a comic review assignment while on vacation in Cabo? Well, since I read it on the plane over here… Here we go: New Avengers #12 is part one of the “A.I.M. vs S.H.I.E.L.D.” storyline that ties into Civil War II, Marvel’s big summer crossover and sequel to the critically acclaimed Civil War a few years back that saw the MU divided by the Super Hero Registration Act and created a huge schism between Steve and Tony. This ish starts off with an epic brawl between a Celestial and the Avengers–New and Old–for the fate of the world. Just a typical day in the life of an Avenger.

Al Ewing (Dr. Who) sets up this issue with Maria Hill (still in big trouble with the Security council over the recent Pleasant Hill fiasco), who attempts to think outside the box to find Roberto de Costa and his Newly acquired A.I.M after they rescued/helped escape the Cyber-terrorist/ex-hero Rick Jones. Paco Medina (Amazing X-men) linework is, per usual, clean, consistent, and detailed. Meanwhile, it’s all Avengers on deck to open a can of whoop-arse on the big baddy the Celestial destructor. Add to that, an Evil Reed Richards from another dimension to lay out a dastardly plan to defeat Earth’s Mightiest; he introduces ***SPOILER ALERT*** The New Revengers, not to mention good ol’ John Garrett reprograms Howling Commando alien-tech LMD Dum Dum Dugan for a secret mission of his own. This issue is jam packed with all manner of Chao, and I like it! 4/5 TNT Arrows.

While the start to the Spider-Man story in the new Civil War isn’t especially exciting, it still manages to be a fun read. Cristos Gage (Avengers Academy, Superior Spider-Man) captures the great awkward humor that is Spider-Man, while Travel Foreman’s (Animal Man) art keeps the eye flowing frame-to-frame. The story is also hilariously easy to tell without any spoilers, strange considering that the current Civil War is fought over Ulysses, a young man who is basically a walking spoiler.

Amazing Spider-Man: Civil War #1 in a webshell: Spidey trying to convince Ulysses to work for his company to predict what will sell and what will not. That’s it. It’s funny and awkward and a bit naked on one page, which made it an easy read. The big plot twist comes at the end when (*SPOILER ALERT!*) Ulysses tells Spidey of an inevitable betrayal in his future. Overall, I’d say the story is a decent read due to the quick humor and good set-up for more to come, and the easy-going action makes the reader eager to keep coming back for more. 3/5 Web Slingers.

In all my years reviewing comics, I’ve rarely been as excited or intrigued by anything as much as watching Valiant Comics rise to challenge the two-party system of Superhero Comics. We’ve all witnessed the birth of a shared universe in a way that Marvel and DC never could, because Valiant has those two universes as its foundations.

As a result, Valiant’s crossover events, from “Harbinger Wars” to the current event 4001 AD, have been exciting and rewarding, especially for those of us who’ve kept up with the majority of the publisher’s titles. 4001 AD: Bloodshot #1 by Jeff Lemire (Bloodshot: Reborn, Animal Man) and Doug Braithwaite (Unity, Punisher) is exactly that for fans of Bloodshot.

This issue isn’t necessary in the larger context of 4001 AD, as the story merely focuses on Bloodshot’s final mission before he gets involved in the war between Rai and Father. As exciting as that is, it’s a much more emotional story that adds some heart to the relationship between Ray Garrison and the nanites that compose Bloodshot. Braithwaite’s art helps deliver that message beautifully, particularly with his panel layouts in the scenes that show Bloodshot’s fragmented memories. Ultimately, this is a great book that closes a chapter on a big part of Bloodshot’s past as he gets set to step into the future of 4001 AD. 3.75/5 Nanites

Ladies and Gentlemen, start your post-apocalyptic, fucked up engines!! With DC’s revival of Hanna-Barbera properties, Ken Pontac (ToddWorld, LazyTown) was given the duty of bringing Wacky Races to life and he does so by making it into the “Mad Maxian 500” by way Marvel’s villain Arcade. The only thing I remember from the old school cartoon were Dick Dastardly and Muttley, and they were just driving; in this re-imagining all the contestants have all been gathered by the “mysterious narrator” and the prize is a ticket into a utopian paradise while the price of losing is death.

Pontac’s writing in this book is enjoyable enough, and the story compelling enough to want to see where this is heading, a lot of flashbacks employed sometimes felt a bit muddled, especially with Leonardo Manco’s artwork, which is very Howard Chaykin-esque. Hopefully the artwork gets a tad cleaner, although it is leagues away from the way Hanna-Barbera styled their characters. Yes, it’s all supposed to be dirty and muddled, but if they can clean up the artwork just a bit, this might just be a nice hit for DC. 4.25/5 Bibles.

Marvel’s jumped the shark again, and then speargunned it into inedible sushi tidbits that even a fecal-fiending Plecostomus would undoubtedly upchuck as nothing more than innocuous chum bucket sludge with their latest ungodly offering entitled, Civil War II: Gods of War #1.

The comic finds our veritable ancient and outcast Roman super hero Hercules butt-hurt over the fact that Tony Stark and every other modern-day super person have made him a virtual persona non-grata as he prepares to battle a group of New Gods given the lame-ass sobriquet of Uprising Storm (led by a villain named Cryptomnesia – who appears to be a rather blatantly plagiarized version of Neil Gaiman’s Technical Boy, lifted directly from his American Gods novel, currently being produced as a new television series for the STARZ Network, for early 2017), a group of villains, who miraculously only Hercules and no one else can see. The same-old, re-tooled, and re-booted Marvel regulars don’t wanna hang with Herc for what seems to be a ridiculously stupid reason, the New Gods either wanna take him on or take him in, and Herc might have to rely on some ancient old friends to help him as he attempts to summon them by cell phone??? 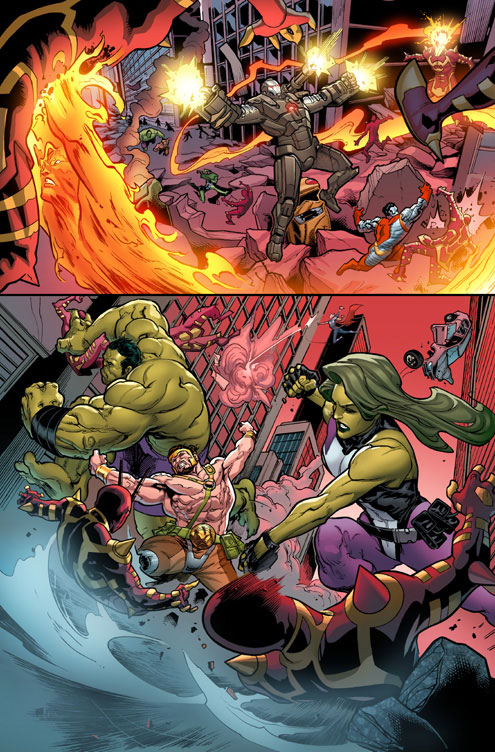 Dan Abnett (2000 AD, Nova) writes predictable Marvel boilerplate here that offers nothing new in story form, Emilo Laiso’s (3 Guns, Gore) pencils deliver standard Marvel-grade characters and environs, and Guru-eFX’s (Iron Man, Nova) petrochemical color palette illuminates the scenes a few degrees below fluorescent eyeball burn. If Abnett keys up this potential 3-Way War beyond Ragnarokian proportion, and he thereby kills off every single superhero so that Marvel can rebuild their whole entire oeuvre from nothing…then I think there’s a chance these guys might have something here.

At this point, Marvel and DC are the Coke and Pepsi of the comic world: both are highly carbonated soft drinks drowning in processed sugar that most of America loves, with half of us preferring one brand over the half – yet at the end of the day, both of them rot the enamel from our teeth and burn a bloody hole through our stomachs. How about a Marvel/DC Crossover Event where all of these played-out 20th Century super heroes irrevocably kill themselves off for good? 2.5/5 Godless Heathens.