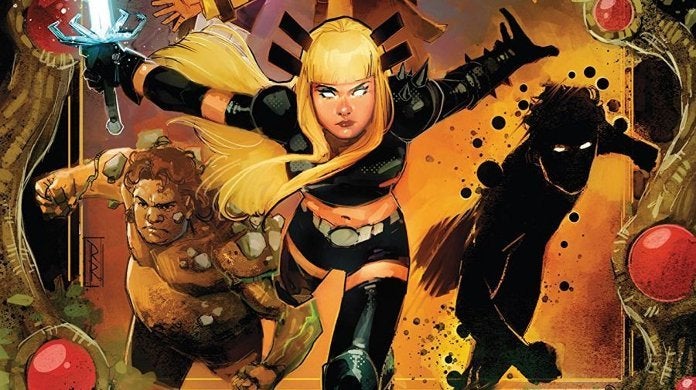 In this week’s edition of the GHG Sunday Night Stash, we’ve got DC, we got Marvel, we got Legions, and we got Mutants, and they’re right here for you! WE’re easing into colder weather, and that means sitting back with a cozy drink and a book, and we’re here to tell you which ones are worth your Sunday pass or catch.

Let’s dive right in the huddle, via GodHatesGeeks.

Ed Brisson teams up with Jonathan Hickman to bring us a fun story illustrated beautifully by Rod Reis. The writers duo set up their characters quickly, then send them off on a space adventure bound for trouble.

Sunspot and the team are so enamored with Krakoa that he needs to show Cannonball, who was last seen with his spouse, Atlas of the Shi’ar Imperial Guard In the Shi’ar. I don’t want to give away too much of the plot and “A-Ha!” moments, but it’s informative while being lighthearted.

Rod Reis brings a Phil Noto / Bill Sienkiewicz flare that makes one pine for the New Mutants covers of old. But unlike Bill, Rod uses vibrant colors along with Phil’s expressiveness. I definitely enjoyed this introduction, and will pick up issue two. 4/5 Bibles.

P.S. It’s also important to note that this release seems to parallel Brian Michael Bendis’s Legion in tone, which was released on the same day. Hmmmmm…

I went into this comic with equal parts trepidation and excitement. On the one hand; epic hard sci-fi adventures, large sprawling team book with varying voices of the members of the cast, all of this does not play to Brian Michael Bendis’ strengths. On the other hand, he seems to have renewed vigor since the jump to DC Comics. Oh yeah, and it’s the f^@&ing Legion of Super-Heroes.

This story starts with a chase scene through what Gotham has become in the future that leads to Ultra Boy and a handful of Legionnaires finding an artifact from the current Age of Heroes. At the same time, Jon Kent is acclimating himself to the 31st Century and seeing how Earth has changed. Bendis’ narrative moves at a brisk pace and doesn’t get too bogged down by dense dialogue. 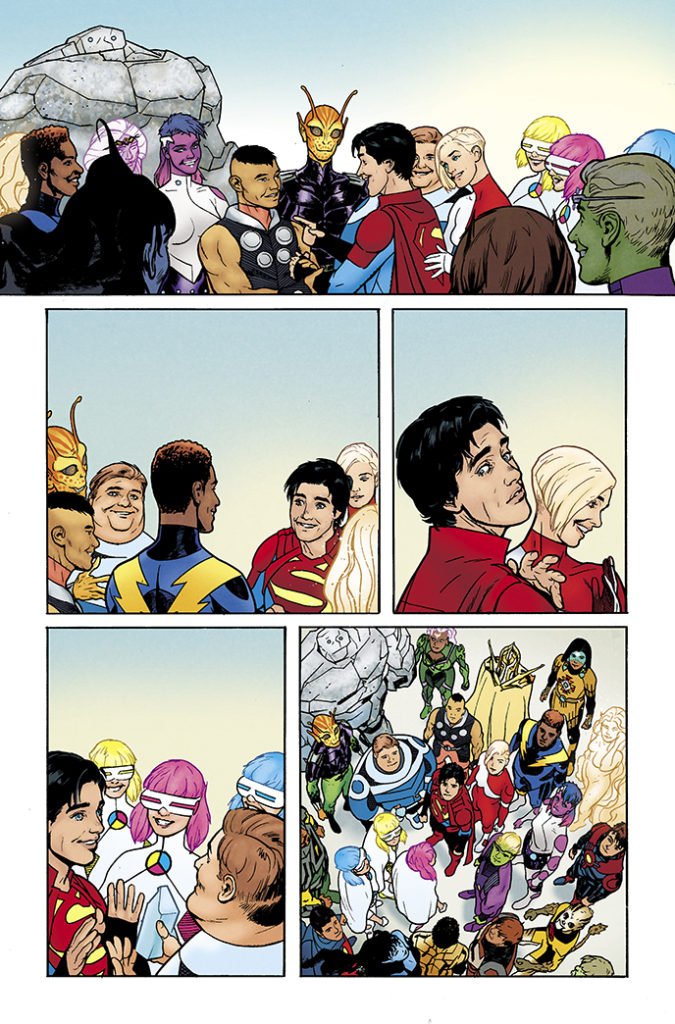 There were only three minor gripes that I had with the story. The first is how meta the narrative tries to get. There are a few too many heavy-handed insider wink/nudge type lines about the confusing nature of the always sprawling Legion roster or the reboots of the DC Universe that almost took me out of the story. Also, if you’re going to give the Legion cool holographic name tags and power descriptions, maybe the main characters of the story should have gotten those? Lastly, when Rose (of Rose and Thorn fame) finally appears, she’s only in two mere panels? Given how she was the entire focal point of the LoSH Millenium two-parter just prior to this book, it was an odd decision to relegate her to the background.

This is one of the most visually stunning books I’ve seen in ages. I’m a fan of artist Ryan Sook’s past work, but Wade Von Grawbadger’s clean ink finishes, combined with Jordie Bellaire’s always reliable palette, which pops, but never blinds, make this as close to a perfect art team as one can get. I am pleased with nearly every single costume redesign, and there were a lot of them. I think that this team is trying to compete with George Perez, Al Vey and Tom Smith from their classic late 90s Avengers run, to see who can show larger team splash pages with intricately designed heroes, each with unique facial and body structures. 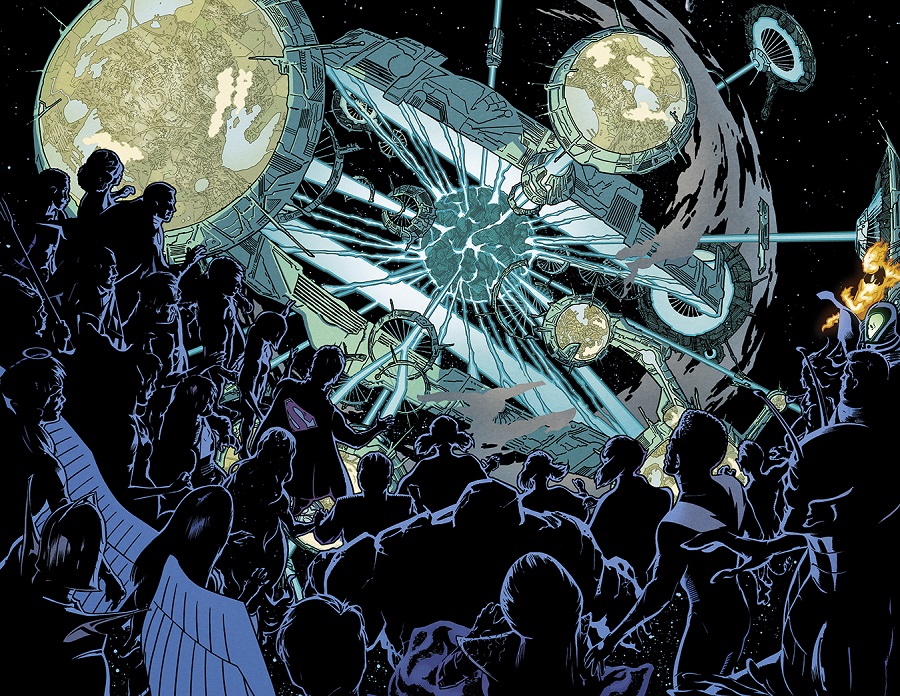 As a Legion fan, I always hope for the best, but due to constant relaunches, reboots and the like, I prepare for the worst. This creative team has their hearts in the right place, they respect the franchise and, given the number of cool mysteries that were set up, they appear to have big plans in store for the Legion of Super-Heroes. Here’s hoping that this time, they get the lengthy run they deserve. 3.75/5 Bibles.

When I first heard about a Spider-Man and Venom team-up comic it didn’t take much to get me excited, seeing how titles related to the iconic duo have been absolutely killer as of latel. With this book you have to set your expectations before going in and take it for what it is. This isn’t an over-the-top badass Spider-Man & Venom story, but Double Trouble is more the all-ages approach to the characters and their relationship. Mariko Tamaki provides very simple dialogue and Guruhiru‘s artwork that is definitely targeted towards a younger demographic, but should be a fun read for a short series. Not the particular cup of tea for the everyday Venom fans that’s for sure, but an admirable effort nonetheless. 3.25/5 Bibles.

Have you ever been under the influence of a mind altering substance whether it be acid, ‘shrooms, even weed or just really drunk? You ever get those lulls or lapses in time and then waves of information and events come rushing in? So I read Grant Morrison‘s Green Lantern series and at times found myself in the Lull of the trip.

This time, Morrison has Hal on a four-day-long, super intense ayahuasca trip after a heavy meat protein diet (which is a no-no according to Shamans), and all this bizarre, literal out-of-this-world fleshy imagery is flooding his poor human mind. It seems like Hal is just along for the trip, even on War World. Grant Morrison is pulling demon names from intergalactic grimoires and painting a multi-sensory cacophony in this book alongside Xermanico. 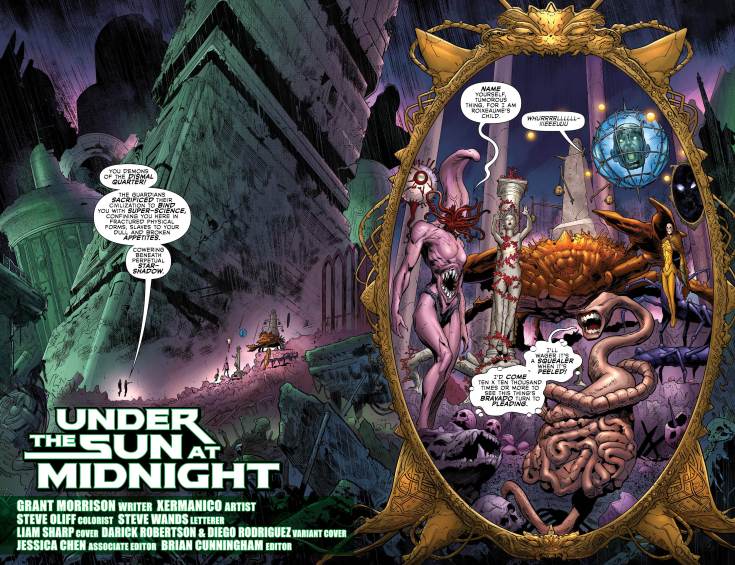 Alexandro Germanico (@Xermanico on Twitter) picks up where Liam Sharp left off without skipping a 7-valved green heart beat, and then some. The creatures and scenarios almost as mind-bending as the foes and details in Grant Morrison’s Doom Patrol and Invisibles. This book almost made me forget about the days when Travis Charest helmed the art of the Dark Stars series with his best Jim Lee impression (before he evolved magnificently on Wildcats with Alan Moore.) 5/5 Grimoires.