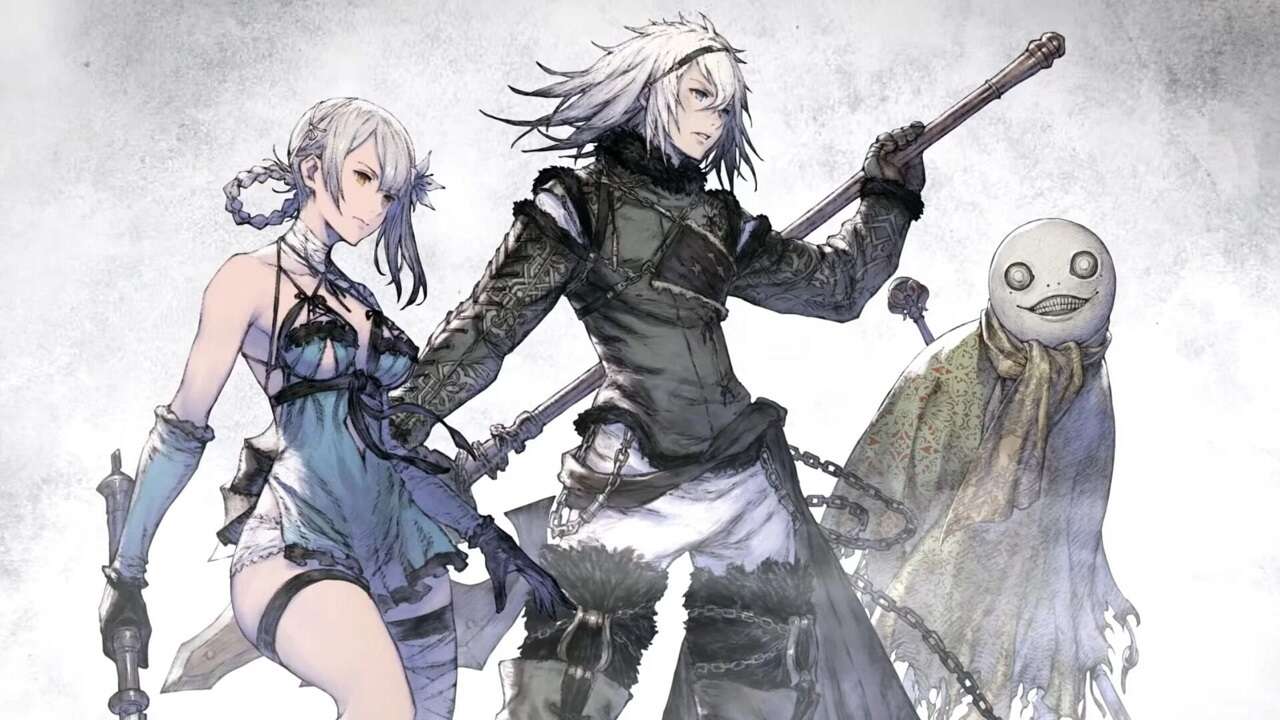 My first entry into the NieR series was with NieR Automata. The cerebral impact Automata had on me, made me extremely curious about the events prior. Thankfully the original NieR game (named differently per region) came out as a remake called NieR Replicant Ver.1.22474487139…

Why the long number? I don’t know because…Yoko Taro. Honestly, my explanation for nearly everything that happens in this game can only be explained by the level of eccentricity that Yoko Taro has when creating his games. How eccentric are we talking? Think Hideo Kojima levels.

You may be wondering what type of game NieR is if you haven’t played any of the games. It appears to be a typical animu waifu/husbando filled, action JRPG. You spend a lot of time hacking and slashing enemies, picking up consumable items, leveling up your weapons, and doing fetch quests for NPC’s. Pretty standard right? You play as an unnamed white-haired boy. I think the community has deemed his name to be NieR, but the name is chosen by the player.

This boy is tasked with finding a cure for his young sister Yonah who has been consumed by the black scrawl disease, which is plaguing the entire world. Along the way, you encounter enemies called shades, which are dark creatures who attack humans. The origin and purpose of the shades are initially unknown. During his journey, the boy begins to learn more about the black scrawl, the origins of the shades, what is happening to humanity, who the characters are around him, and even who he is.

I felt connected to the core characters in NieR Replicant, more so than I did in Automata. The English voice acting is done extremely well and has some notable actors like Laura Bailey and Liam O’ Brian. The dialogue is so amazing in this game. It often made me laugh and other times made me pensive. For a game filled with melancholy themes, I laughed way more than I expected. I was constantly intrigued about what was going on with these characters.

The story unfolds and answers some questions, while adding more questions. In each ending you learn a bit more, but that knowledge only brings more questions. The cerebral processing your brain goes through when playing any NieR game and the way it’s executed is completely unique to this series. It’s a pretty great ride for philosophical storytelling, but I often question if the repetitive gameplay is worth it.

Whatever the case, NieR Replicant added an entirely new ending to this version of the game, Ending E. So, make sure you play the game four to five times for all endings (Ending A-E). Why? Because…Yoko Taro. You need to repeatedly play the game to fully grasp (mostly) everything, just like you had to in NieR Automata. Except in Replicant, the repetition got old, much quicker. This is because NieR Automata had such silky-smooth hack and slash combat thanks to Platinum Games, whereas Replicant’s combat is a bit more simplistic.

This remake from Toylogic absolutely made changes to the combat that made it feel more enjoyable, but after one full playthrough, I was a bit burned out. Did the any of the endings justify the monotonous gameplay? Not really. Although, I did find Ending E to be quite a treat and am glad I waited to play this version of NieR to experience it. I just didn’t have the same level of mind fuckery and existential exploration that NieR Automata provided, so the grind for all endings didn’t feel as worth it.

Before you get into the deep philosophical elements of NieR Replicant, you’ll have to engage in a handful of boring fetch quests. This discouraged me from doing side missions, but in order to unlock Ending E, you need to collect ALL OF THE WEAPONS! You buy and collect several weapons, but others are only obtainable through these side missions. It’s a shame because only about three side missions were actually interesting and the rest were fetch quests. NieR Replicant is indeed a grind and I’m still questioning its worth. This world is bleak and barely satisfying, but it isn’t this way without purpose and some revelations are really interesting.

There are also optional activities to do like fishing quests and cultivating your garden. Too bad the fishing sucks because you have to time the dip of the lure, which feels like a quick time event if the QTE didn’t give you any indication of what button to press or when. Oh, and the timing varies depending on the fish, but the game doesn’t tell you anything about it so you’ll have to rely on a guide. Also, why did I have to log into NieR Replicant every day to check on my growing flowers to make sure they didn’t wilt because the cultivation is based on real time? Thankfully these activities are optional and can at times feel a bit grounding.

Yoko Taro loves to mash different genre’s together so you won’t just be given a sword to hack and slash. You’re also given a book named Grimoire Wiess (AKA Wiessey) that can shoot out magic. The enemies called shades can also use magic, so at times it’ll feel like you’re playing a hack and slash game mixed with a shoot em’ up. This genre-bending is similar to Automata gameplay except Replicant has way less depth and the quick menus aren’t as intuitive. However, one gameplay element that’s unique to Replicant is there’s a HUGE chunk of text adventure added, where you will be spending several hours reading. Sometimes I felt as though NieR Replicant is just an unpublished book put into a game. Thankfully, the writing is very good.

The gameplay is boring. Most of your time will be spent revisiting previously visited places and mindlessly slashing away at shades and robots. The same enemies will be encountered over and over again as the world is limited to five locations surrounding the central village hub: Junk Heap, Forest of Myth, Façade, Seafront, The Lost Shrine. You revisit these five locations several times PER PLAYTHROUGH.

The boss fights are part of the more satisfying gameplay elements. The bosses are always giant shades that you learn more about in your second playthrough, Route B. I get why this game was structured this way, but I feel so much could’ve been cut out without sacrificing the clarity of the core purpose.. I don’t need mundane gameplay to foster an exploration of meaning.

NieR Replicant has one of the best music scores I’ve ever experienced. Keiichi Okabe’s stellar music score is worth paying for an expensive vinyl or attending a NieR dedicated orchestra. It’s very concerning that such an amazing soundtrack can become annoying through the forced repetition.  Once I got to my third playthrough, I couldn’t stomach listening to these amazing songs.

Environmentally, NieR Replicant still looks dated. There weren’t as many color and texture updates as there were in other remakes such as Shadow of the Colossus. However, the use of color is meant to demonstrate a level of bleak, so I can’t blame the game for looking so bland. Anything vibrant or detailed would have took away from the game’s melancholy vibe.

Should You Play NieR?

I appreciate the updated graphics and combat smoothness to Nier Replicant Ver.1.22474487139… All of the changes Toylogic included couldn’t really do much to modify how dated and repetitive the gameplay is. The requirement to go through mundane combat sequences and quests makes it hard to justify experiencing a game that has really amazing characters and story telling. My biggest advice to players new to the NieR series is to play Automata first, and if you really liked that, then play Replicant. If we ever get another NieR, I hope we can still get the high level of storytelling, character building, and existential exploration, but do away with the repetition. 3/5 Whiskey’s.