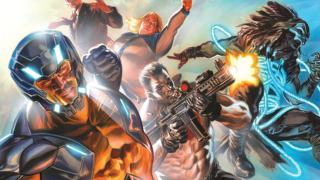 Valiant is proud to announce NINJAK #0 – an all-new jumping-on point for the Valiant Universe’s most dangerous intelligence operative, and a massive 40-page milestone, arriving in comic shops everywhere this September!

FIRST: New York Times best-selling writer Matt Kindt (X-O MANOWAR, Mind MGMT) brings his masterful, record-setting run to a close as he puts Ninjak’s past and present in the crosshairs with a shocking and revelatory tale – as illustrated by fan-favorite artist Francis Portela (Faith) and an all-star cast of comics luminaries, each detailing a different moment in Colin King’s bloodstained path from boyhood to international infamy…

Behind the years of training… Underneath the high-tech gadgetry… MI-6’s most experienced operative is still flesh and blood. So just how is a mortal man like Colin King able to survive in a world filled with telekinetic psiots, eternal warriors, and sentient suits of alien armor? The key to Ninjak’s survival is buried deep in the past…and today the world’s most dreaded super-spy prepares to reveal his most closely guarded secrets! 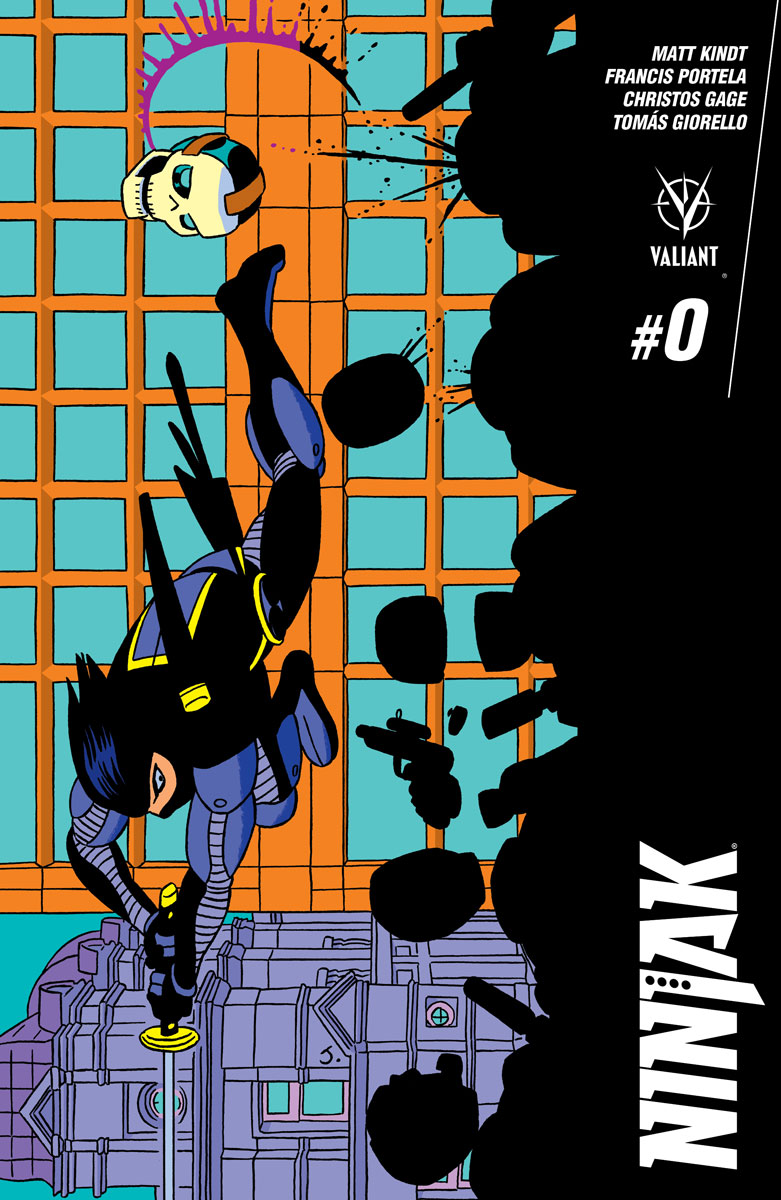 THEN: Before Ninjak launches into a riveting new ongoing series this November in the pages of NINJA-K #1, the torch is passed to acclaimed writer Christos Gage (Netflix’s Daredevil) and blockbuster artist Tomas Giorello (X-O MANOWAR) as they prepare a startling introduction to Colin King’s next mission with a shocking prelude to the winter’s most anticipated new series!

This September, discover how the man behind the sword fortified his mind, body and soul as Francis Portela and an all-star arsenal of special guests celebrate the final chapter in Matt Kindt’s adrenaline-addled run on NINJAK…and then, get ready for a startling introduction to Colin King’s next mission as Christos Gage and Tomas Giorello present an essential prelude to November’s NINJA-K #1! The past, present, and future bleed together here with an unstoppable 40-page jumping-on point, only in NINJAK #0 – featuring a blockbuster lineup of covers from David Mack (Daredevil), Clayton Henry (HARBINGER WARS), rising star Yama Orce, Peter Bagge (Hate), and Javier Pulido (She-Hulk)!

Plus: Ninjak strikes again this November with a deadly new beginning in NINJA-K #1 – A NEW CAN’T-MISS ONGOING SERIES! Coming this fall from acclaimed writer Christos Gage and superstar artist Tomas Giorello, the United Kingdom’s most dreaded intelligence operative delves into the cold, calculating world of espionage and international intrigue!

For nearly a century, MI-6, the most elite branch of Britain’s clandestine intelligence service, has honed a ruthlessly effective, top-secret division – THE NINJA PROGRAMME – into one of its nation’s most finely wielded weapons. Tasked as the first and last line of defense for queen and country, this small shadow army of agents and assassins has produced a succession of notable assets, including NINJA-A, the Queen’s silent weapon of World War I; NINJA-E, the globetrotting secret agent that pulled the Cold War back from the brink of armageddon; and, most recently, NINJA-K, aka Colin King, a brash but fearless instrument of lethality that has saved the world from madmen and terror at every turn.

But now…an unknown enemy is hunting and killing members of THE NINJA PROGRAMME one by one – and NINJAK is next on the list.

FAITH AND THE FUTURE FORCE #1 – the FIRST ISSUE of A SPECTACULAR SUMMER EVENT – is launching Faith out of her Eisner-nominated solo adventures and into the highest-stakes team-up history has ever known alongside Rai, X-O Manowar, the Harbinger Renegades, Timewalker, and a near-infinite army of the Valiant Universe’s greatest heroes of the present and future! On July 26th, the time stream gets turbulent as Eisner Award-nominated writer Jody Houser (FAITH, Mother Panic), explosive artist Stephen Segovia (WAR MOTHER, Action Comics) and comics legend Barry Kitson (HARBINGER, Fantastic Four) join forces to send Faith and Neela Sethi, Timewalker on a centuries-spanning rescue mission to save history from all-out eradication at the hands of a megalomaniacal intelligence too powerful for a single hero!

Faith “Zephyr” Herbert – former member of Unity, current Harbinger Renegade, and Los Angeles’ #1 superhero – is the universe’s last, best chance at survival! Centuries from today, a devious artificial intelligence has unleashed a blistering attack on the very foundations of time…one that is unwriting history from beginning to end! Now, with her options exhausted, Neela Sethi, Timewalker – the self-appointed protector of what is and will be – has returned to the 21st century to recruit Earth’s greatest champions of today and tomorrow to oppose this existential threat…and she needs Faith to lead them! But why Faith? And why now? 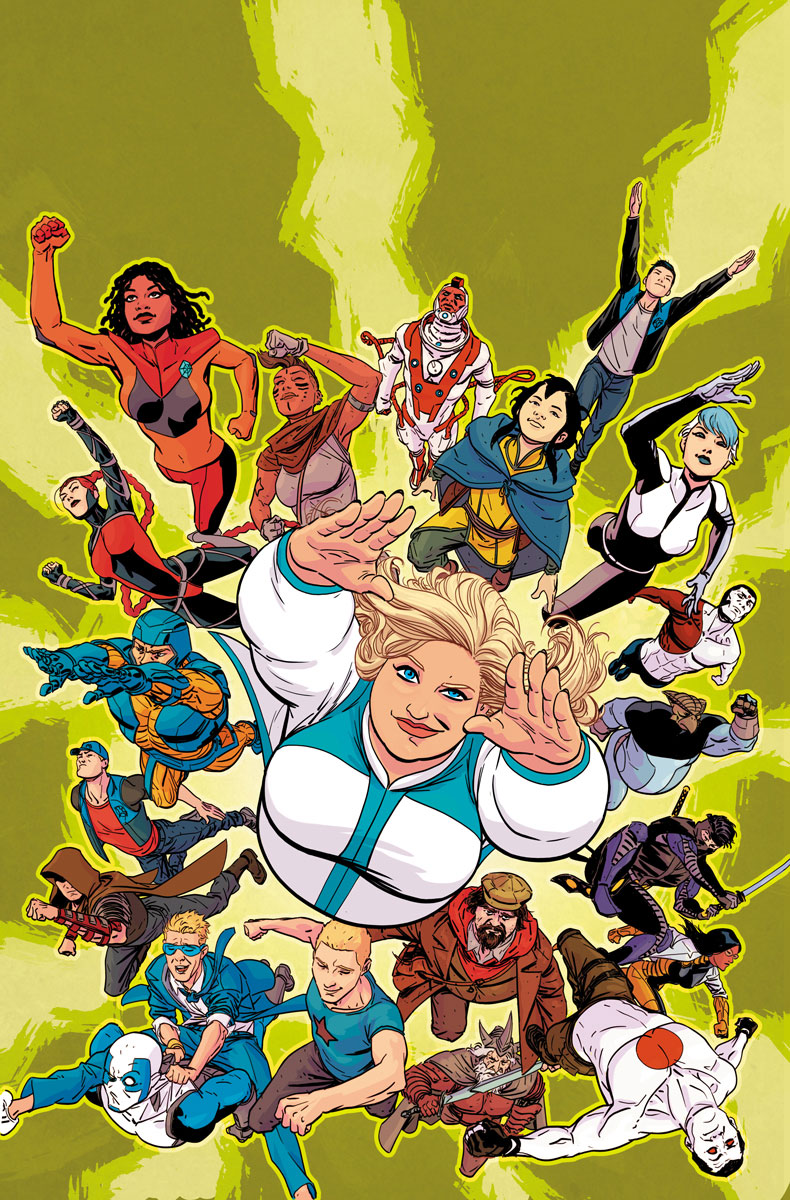 “[FAITH AND THE FUTURE FORCE] was more about having a villain different in style and scope than we’ve seen in [Valiant] before, while still feeling like a villain that fits into Faith’s world specifically,” says series writer Jody Houser. “He’s weirdly cute for an entity that wants to kill everything and everyone. Hopefully Faith and the others don’t underestimate how dangerous he is…”

On July 26th, an enemy unleashes entropy at the far end of time…and Faith leads the die-hard team of Rai, X-O Manowar, the Harbinger Renegades and special surprise guests recruited from the ancient world to 4001 A.D. to save the modern day from a malevolent force bent on eradicating existence one century at a time! The clock is ticking, so don’t miss a moment as Valiant’s high-stakes summer event presents a timeless jumping-on point that will forever be etched in history, only in FAITH AND THE FUTURE FORCE #1 – featuring covers by Jelena Kevic-Djurdjevic (DIVINITY), Kano (Daredevil), Marguerite Sauvage (FAITH), and Felipe Massafera (Shaper)! 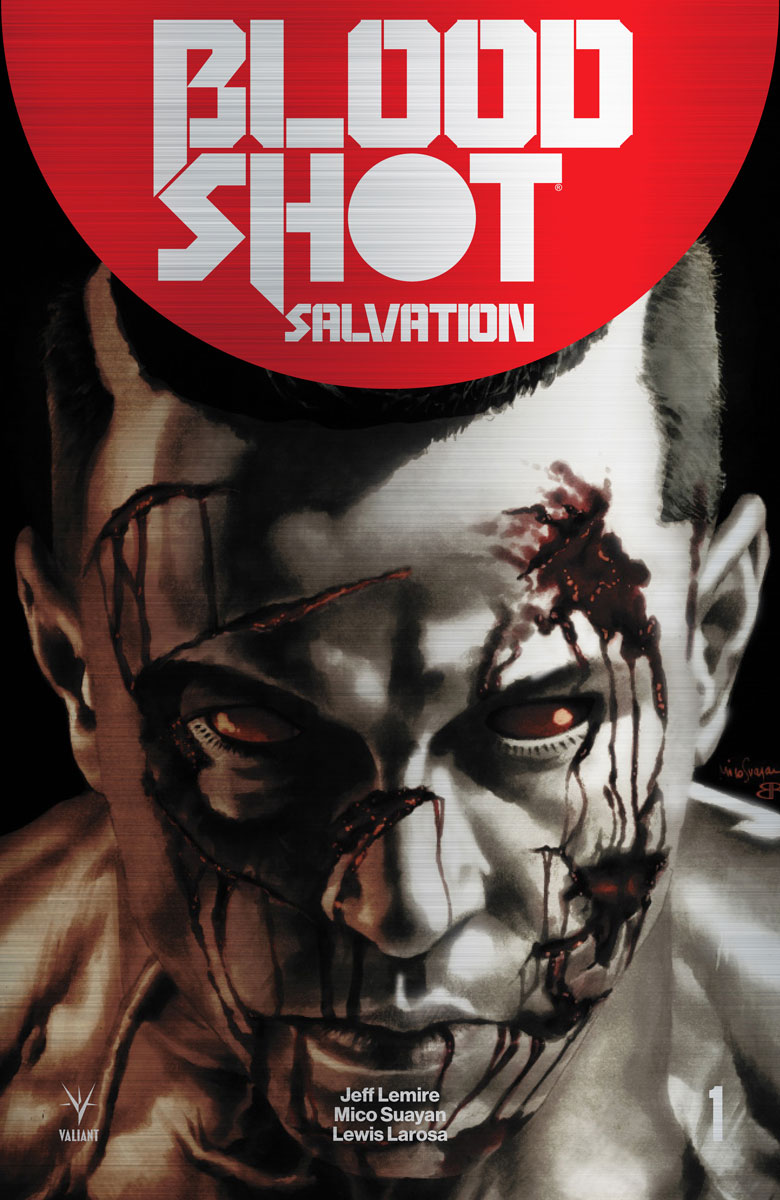 “Our first metal cover – produced for the launch of X-O MANOWAR (2017) #1 earlier this year – was not only a runaway success, but a true labor of love. It took more than a year of research and testing to source the correct materials and perfect the printing process in order to produce the first, true metal cover in the history of comics,” said Valiant CEO & Chief Creative Officer Dinesh Shamdasani. “It’s a highly specialized process that generated such a tremendous response that we’ve decided to revisit it for our most important new series of the fall. But we have not been resting on our laurels. Together with our printing partners, we’ve been able to further refine the process and reduce the cost – a savings that we are passing on to fans and retailers with a lower threshold needed to obtain the BLOODSHOT SALVATION #1 Brushed Metal Variant. We’re very happy to announce that we’ll be offering the cover at half the ratio of the first.”