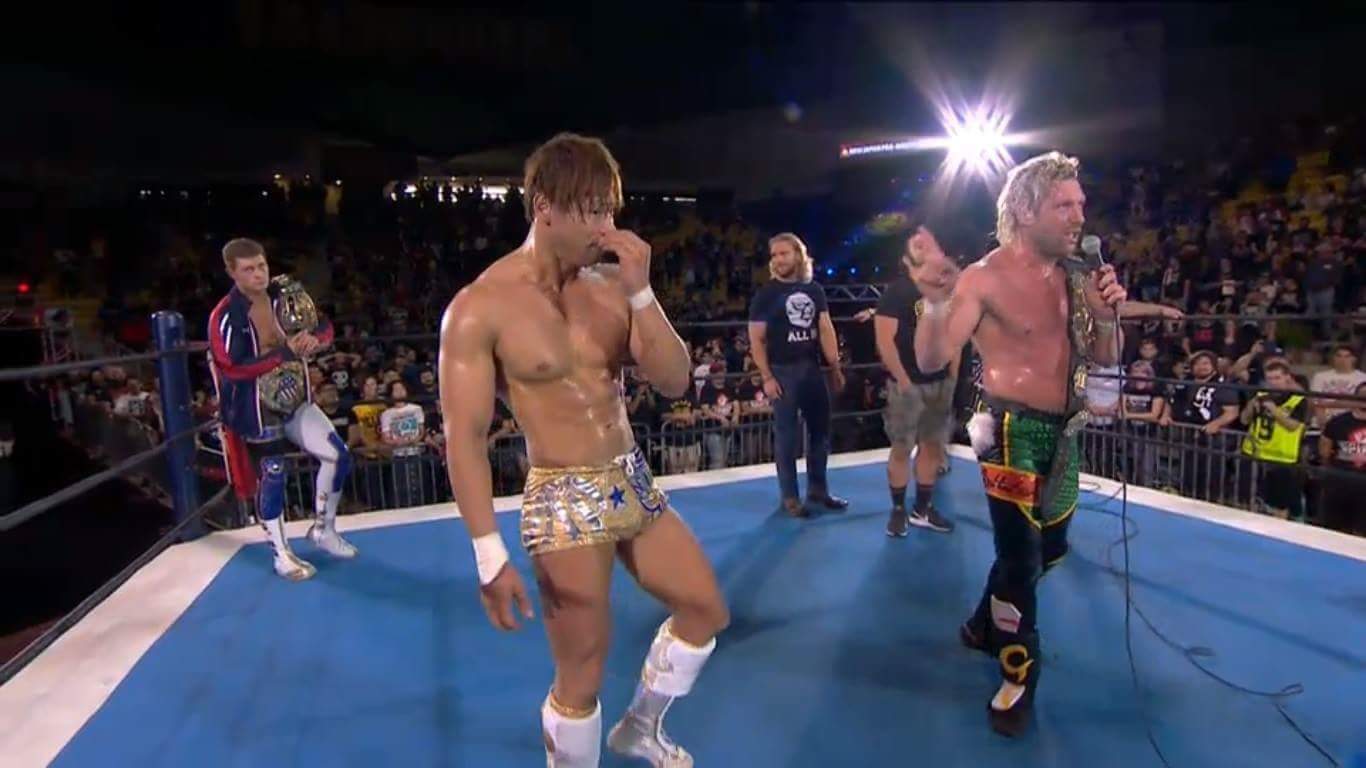 Considering the full card for Fighting Spirit Unleashed was severely delayed due to New Japan’s Destruction tour, announced only 6 days before Sunday, expectations were pretty mild going in. Well, this seemingly rushed return to Long Beach’s Walter Pyramid was a pleasant surprise! The first half of tags and multiple person matches were fine warm-ups for the excellence that was to come following the intermission. Here’s my take. 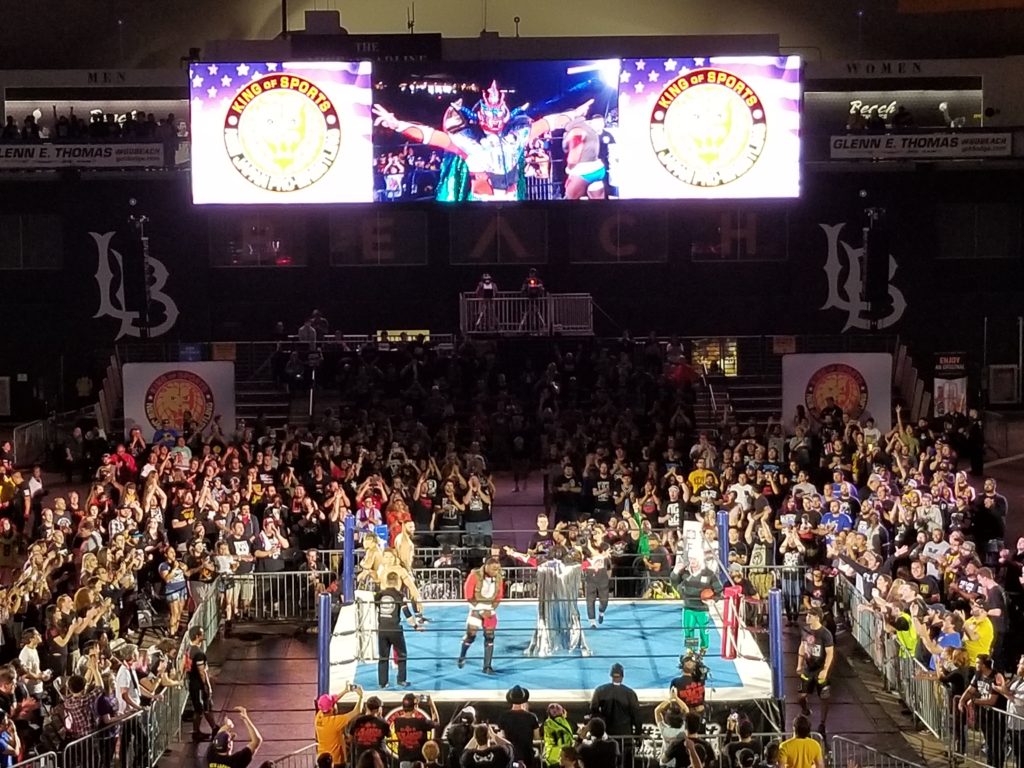 –Christopher Daniels & Frankie Kazarian v Chase Owens & Adam Page – The biggest issue I had with these opening matches was predictable finishes. You pretty much knew who’d take the fall in every one, i.e. Owens here. With The Addiction losing to The Briscoes a couple days earlier at ROH DBD and World Tag League coming up, I wonder if a run in NJPW is in order? Either way, “SCU!” 2.75/5

–Flip Gordon, Chris Sabin, & Jeff Cobb v Hirooki Goto, Chuckie T, & Trent – Flip continues to look great, and the Best Friends appear like true contenders for the IWGP Heavy Tag crown, but the spotlight here was put on the newly crowned ROH TV champ, Cobb. A showdown with Goto and, ultimately, NEVER Open placeholder Taichi, is inevitable. With a PWG World title shot in just a few weeks, the sky’s the limit for the big Hawaiian. 3.25/5

–Zack Sabre Jr, Lance Archer, & Davey Boy Smith Jr v EVIL, SANADA, & Tetsuya Naito – Naito should go to NXT/WWE. Seriously. Other than a fun but sparse Intercontinental title feud with Y2J, the face of NJPW has been left in the dust.. relegated to an assortment of average 6-man tags and medicore feuds. Last night, both with Suzuki-Gun continued. Zack is one of the best technical wrestlers in the world, but was a complete mystery here. In the end, EVIL got a lot of love from the LB faithful despite the loss… 2.5/5

–Jay White & Gedo v Hiroshi Tanahashi & KUSHIDA – While Tana is a briefcase exchange away from taking on Kenny Omega at next year’s Wrestle Kingdom, he’s been basically put in the same spot as Naito on all of these U.S. shows: forgettable tags (or Billy Gunn). Jay White’s crowd heat was the true story here, a complete evolution from just 6 months ago. His rise to heel stardom has been terrific, from garnering little reaction in a killer match with Page back in March to being the most hated man in the business tonight. Bravo. As for this match, a very sober Travis Moody doesn’t remember it. Do you? 2.5/5

–IWGP Junior Heavyweight Title Tournament: Marty Scurll v Will Ospreay – WAKE UP! It’s the true start of the show. Now that the “second night of ROH TV tapings” are done *wink wink*, this match between longtime rivals woke everyone the fuck up. Those who question Scurll’s in-ring talents need to watch this. Much like Adam Cole, Scurll is one of the best defensive wrestlers in the business.. often letting the other guy “do more” (i.e. high impact offense, more explosive spots, etc.), while Scurll has that spectacular, witty/unpredictable timing you see every time he gets serious. The Villain played so well off of Os’ incredible abilities, often cutting Will off at every opportunity. The heavily heated contest began with a bang: Ospreay tried to put Marty away in seconds, nailing a Spanish Fly, Great Sasuke special, and Shooting Star. But Scurll recovered. After 15-minutes of hard chops, counters and chikenwing attempts, Scurll put Os away with an array of finishers, including an absolute incredible top-rope tiger suplex that had the crowd weak. It took a Penta piledriver and reverse brainbuster for the W. Ospreay moves onto heavyweight, Scurll moves onto Kushida. 4.5/5

–IWGP Tag Team Title: The Guerrillas of Destiny v The Young Bucks – While the Young Bucks are my favorite tag team and yours, I’m kinda glad the G.O.D. won. After a long program that begin in Long Beach but exploded in San Fran, several insane tweets, gram videos and viral promos later, the Tongans got their due. In fact, the G.O.D. performed as a better team than the Bucks, utilizing quicker tags and double-team efficiency, cutting the ring in half, isolating each Jackson at will. It was the performance they needed, the victory they wanted, and the much depleted IWGP Heavyweight tag division is all the better for it. 4/5 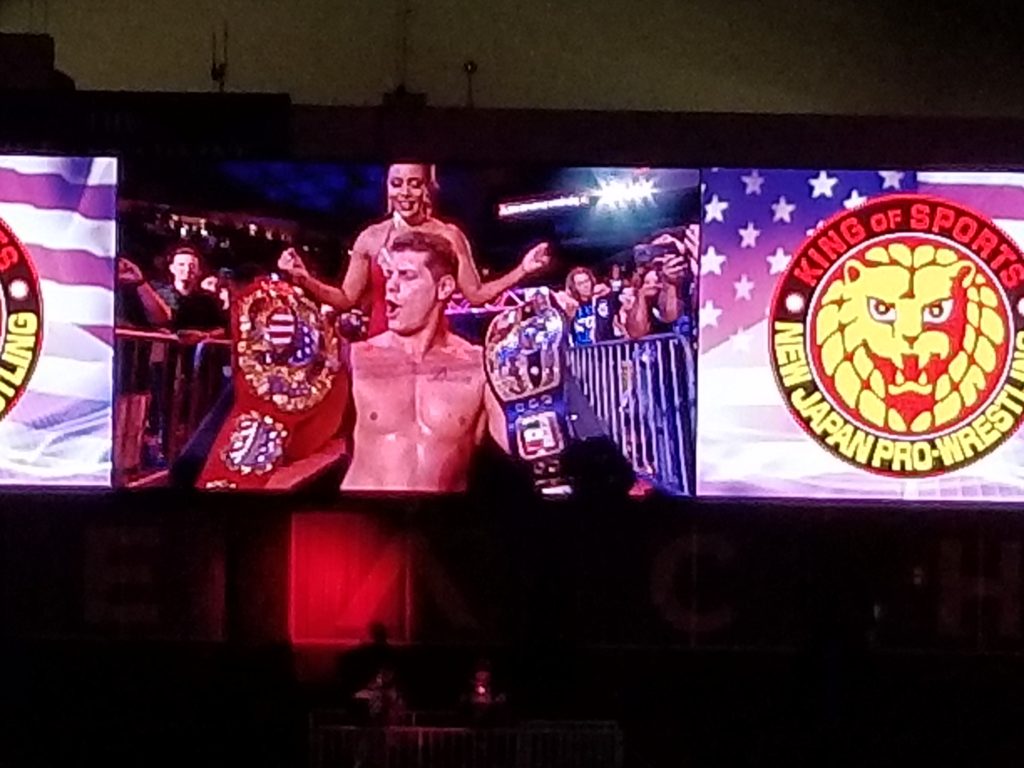 –IWGP US Title: Cody v Juice Robinson – While this wasn’t anywhere close to match of the night, it had my favorite finish: a crazy close cradle coming off a Juice superplex — a complete surprise to me seeing how well Juice has been pushed since defeating Jay White for the U.S. strap back in SF. But maybe that’s the trend, seeing this title hot potato every time it’s defended on a major #NJPWUS show. Ultimately, Cody winning makes sense. Not only did he raise the stakes of the NWA title rematch with Nick Aldis, he put himself to the forefront of NJPW’s Kings of Pro Wrestling show in a pending triple threat against the Golden Lovers. Seeing how Cody’s 3 best non-Aldis matches have been against Ibushi (WK12, Dontaku) and Omega (G1 Special), this is wonderful stuff for fans of the American Nightmare. Better yet, this match was Cody at his finest.. hitting all his spots, looking crisp and touching heel when he needed to. He hit a deathdrop to Juice on the outside early, rana-reversed a powerbomb and teased Pulp Friction a few times on his own, including one into a Vertebreaker! Surprisingly, Juice wasn’t nearly as over here as San Fran.. but that’s probably because SoCal is Bullet Club Country, with a lot of Cody fans in attendance, including yours truly. 3.75/5 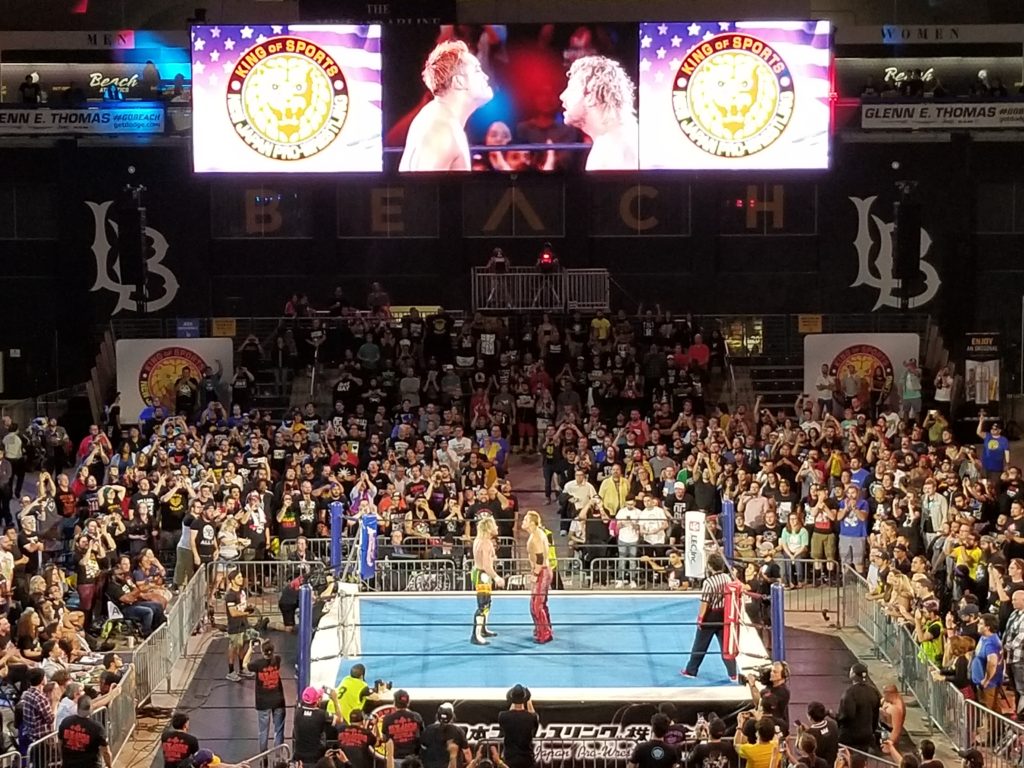 – The Golden Lovers v Tomohiro Ishii & Kazuchika Okada – Holy smokes! When they announced this main event, it immediately locked my decision to attend this show, and I couldn’t be any happier. This was easily the Golden Lovers’ best match in 2018 as a team, despite having a pair of arguably more spectacular bouts with the Bucks (the last show at Walter Pyramid) and Ishii/Ospreay (2 weeks ago at a random Road to Destruction show). This had the cleanest work of the three matches (with one weird tornado DDT from Kenny that still managed to work), as Ibushi and Omega gelled at an all-time high.. while CHAOS held there own, shotgun dropkicking, tombstoning and slide-lariating their way to an incredible 23-minutes. And there was arguably no bigger moment (after several teases in the first 7-8 minutes) on the night than when Okada and Omega stood toe-to-toe for the first time in America, a singles match, really, that needs to take place here. This was also the first time in a NJPW show in America where Okada didn’t feel like a huge babyface; there was no “O-kada!” chant ringing through the Pyramid; instead, the Rainmaker worked more like a heel than usual, often receiving light boos whenever he disrupted a possible huge double-team spot from the G.L. Omega and Okada teased several finishing moves, while Ishii and Ibushi continued their tremendous G1 performances with a scintillating trade-strike-spot of their own. It felt like a wild Chow Yun Fat Meets Bruce Lee moment. #bitchslapmania! The coolest moment, maybe though, was Kenny’s Okada dropkick reversal into a sliding sitdownpowerbomb, followed by an Ibushi Pele. It was INSANE! And so was this match, which finished with a well-timed Golden Trigger. The spoiled independent/non-WWE wrestling fandom continues. 4.75/5

A tale of two halves. Like most New Japan Pro Wrestling shows, once it got serious, it got great. A tremendous night to all those who stayed loyal to the NJPW brand and Gedo’s meticulous booking, despite early concerns of a middling card. This night cinched the fact for me that, so long as I’m free and available, I will never miss a New Japan show in SoCal (or maybe even California in general) ever again.

(Thanks to Jonathan Escudero for main image)