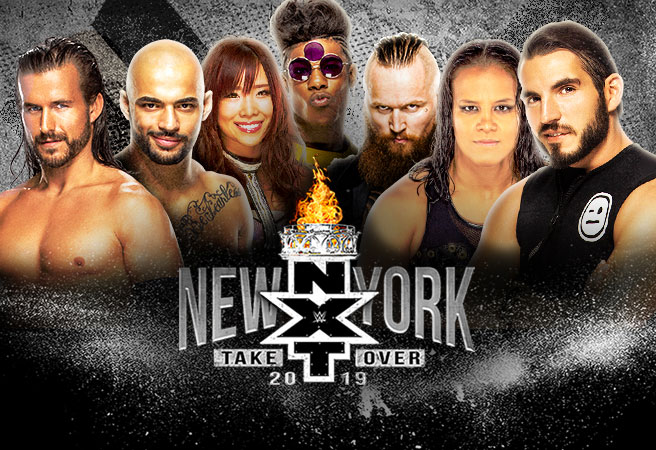 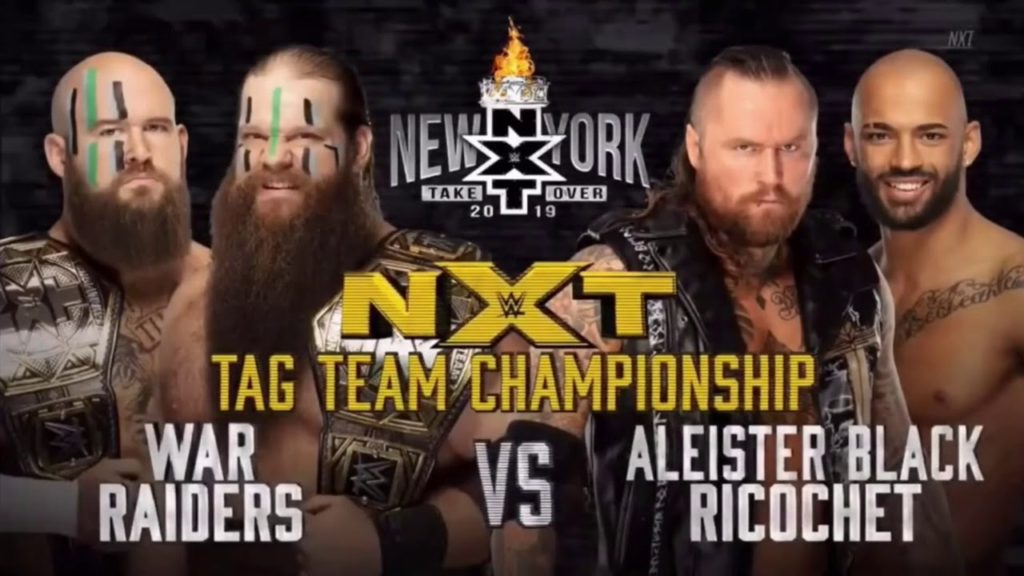 – NXT Tag Team Championship: The War Raiders v Aleister Black & Ricochet – One of the absolute best tag team matches of the year! And imagine this was the first (non TV taping match) I watched after RevPro’s Tanahashi & Ospreay v Suzuki & Sabre Jr! Rowe’s knees were so tough, Warbeard’s agility was mindblowing. You already know what Black & Ric are capable and they did not disappoint. I’m pleased as fuck that the Raiders were super over in the match, able to carry the legacy of great NXT tag teams; this was the pinacle of their growing year on the brand that followed superiority in PWG, ROH & NJPW. – 4.5/5 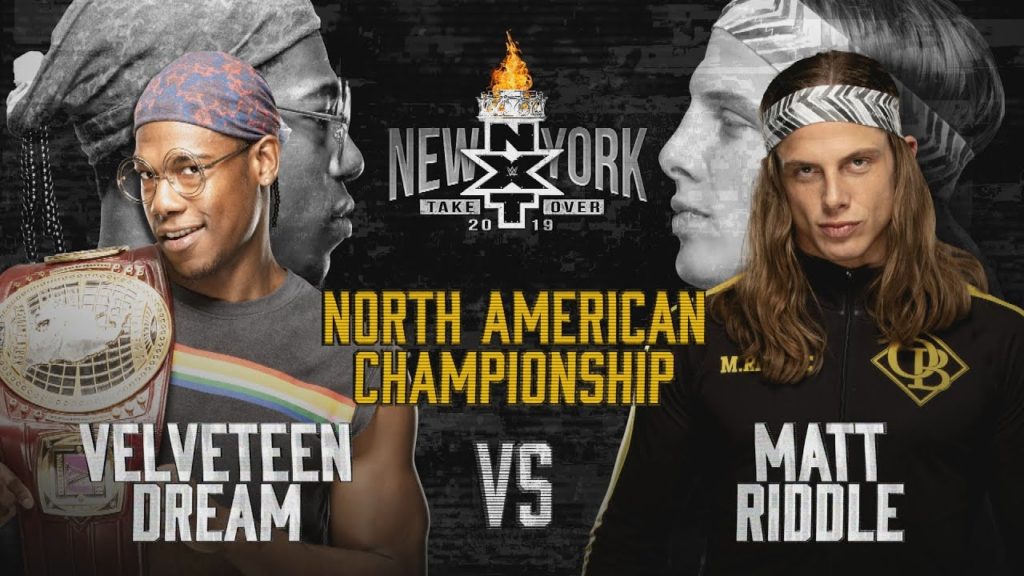 – NXT North American Championship: Velveteen Dream v Matt Riddle – Despite being thrown in a tough spot (hell, every spot on this card is a tough one), they worked some second half magic in the closing minutes. Much like the Strickland/Sabre Jr. match from WrestleCon, this wasn’t–at least initially–the kind of match that gets over during Mania Weekend. But once The Dream “Hulked Up”, it was on. Riddle raised his game, too, with an incredible raised german to Dream hangin on the apron, dusting the top of his domepiece. But Dream’s shocking cradle off the Bromission had arguably the night’s best finish. – 4.25/5 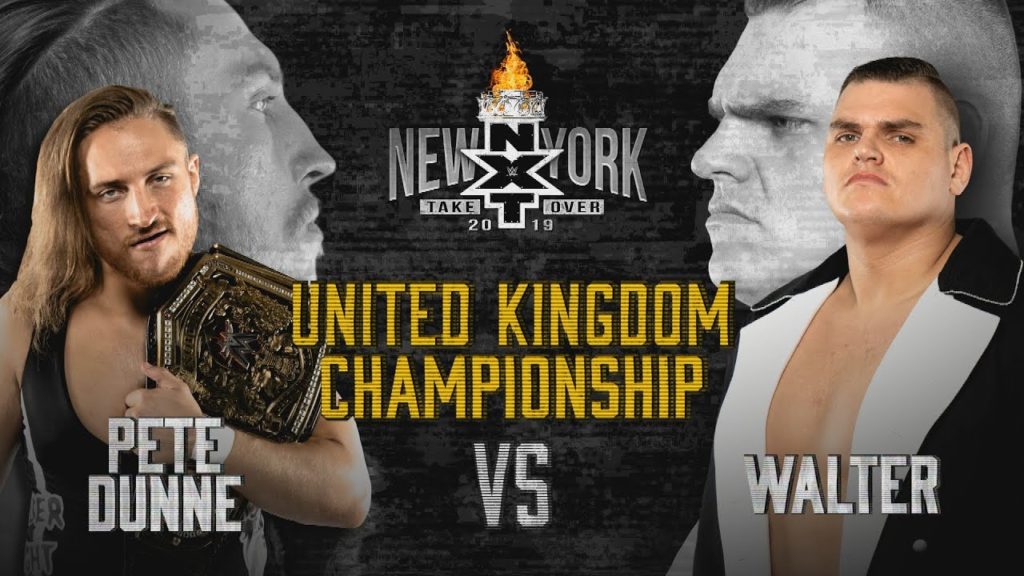 – NXT UK Championship: WALTER v Pete Dunne – While both WALTER & Dunne had plenty of fans in Brooklyn, I sensed this wasn’t a match made for the weekend in front of a crowd that probably had a third or fourth bit of WWE casuals. The 3 millennium dweebs in front of my buddy and I were all browsing on their phones having a disinterested conversation. I think Dunne & WALTER sensed it as well– since they raised the stakes of a wrestling match to a fucking bloody war. WALTER’s heel tendencies came to fruition as well and he’d finally get some heat for viciously booting Dunne when the ref was preoccupied. The match got *real* when WALTER reversed the Bitter End into a vicious lariat and then immediately kicked out of the finisher when Dunne got it for the sure-shot 3. Nope. The champ then went Suzuki with a triangle lock on the tope rope that WALTER countered into a superbomb! The big Austrian followed with a flying Snuka splash from the top. Dunne = Done. (This would have been a 4.75+ in OTT, PROGRESS or wXw…) – 4.5-4.75/5 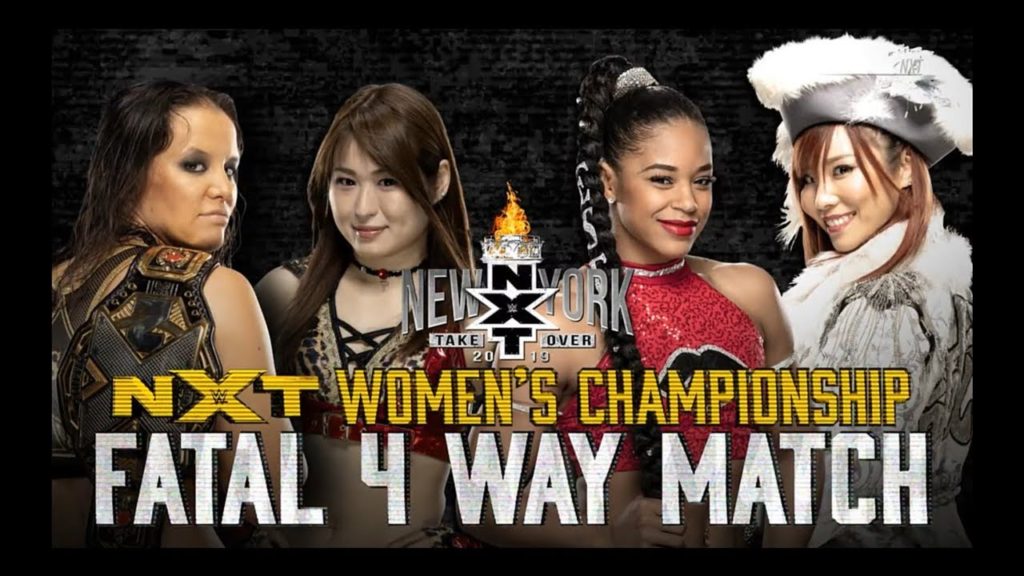 – NXT Women’s Championship Fatal 4-Way: Shayna Baszler v Bianca Belair v Kairi Sane v Io Shirai – A very good three way with a little too much tag-teaming and a somewhat lame finish. It should have gone on first. Everyone here looked great, and Bianca is really coming into her own (that double KOD tho!). Baszler had some pretty nifty suplexes, and seeing Joshi style wrestling ala Sane & Shirai on a WWE program was an absolute joy. – 3.75/5 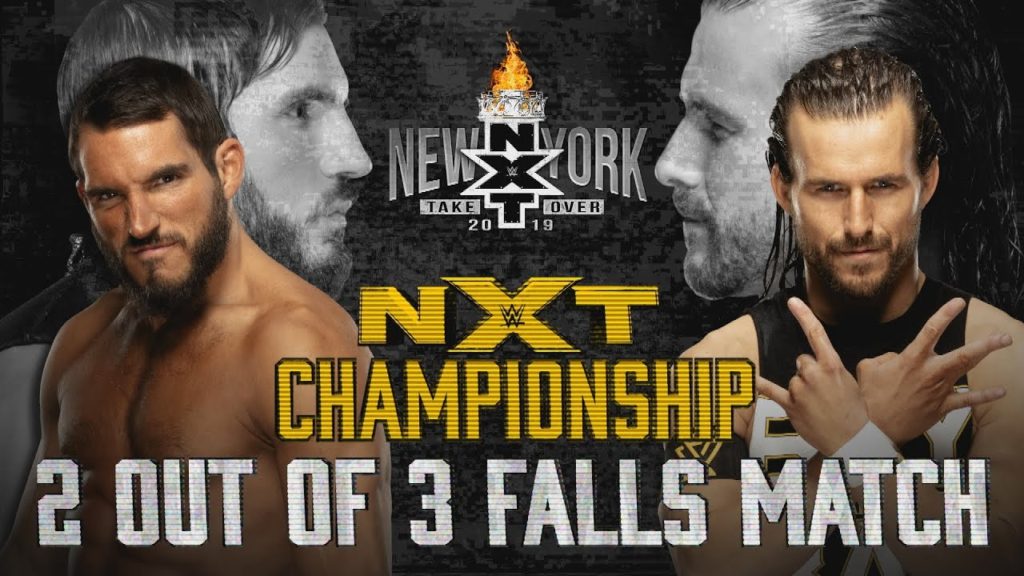 – NXT Championship – 2 out of 3 Falls: Johnny Gargano v Adam Cole – Best WWE-related match of the year, and a Top 5 of 2019 epic that will be tough to top today and tomorrow. I think the pro-Cole/Undisputed Era reaction here (this includes me) hurt the match early on. Gargano and Cole came off like a baseball game at Yankee Stadium filled with people who root for the Yankees AND Red Sox. “Both these guys!” It was strange. That said, they took a strong wrestling match into a high stakes “do ANYTHING to win” sprint to the finish. Their chemistry was near flawless. The last 18-minutes of the 38-minute epic were intense and better than anything in the business not at Wrestle Kingdom. Throughout this duration, Cole teased/attempted his famed Panama Sunrise (second rope bouncing Canadian Destroyer), only to be cut off by Gargano time and time again. Gargano also had a few tricks up his sleeve, too, doing moves not seen since his PWG days and even executing a few of his wife Candice and pal Ciampa’s signatures (draping DDT) for good measure. I also love how Cole’s Last Shot that took the first fall was a story in itself during the stretch. This led to two of the best false finishes of the year. And when was the last time you saw Cole hit the devil wings? And on a fucking table?? Even the Undisputed Era interference/ref bump spot was great, further raising the stakes of an already intense match. When Cole hit Gargano with two vicious superkicks and another Last shot and JOHNNY FREAKING WRESTLING kicks out(!!), Brooklyn went ALL IN! They were the loudest crowd I’ve been a part of since that event. And Gargano gets his deserved moment at NXT’s first Triple Crown champion. Classic match. – 5/5

My first live TakeOver may have been one of the best TakeOvers. I had a wide grin on my face the entire night and still see match ratings that balloon mine. All I can say is ood luck G1 and Mania! You’re gonna need it.